A Room of Their Own 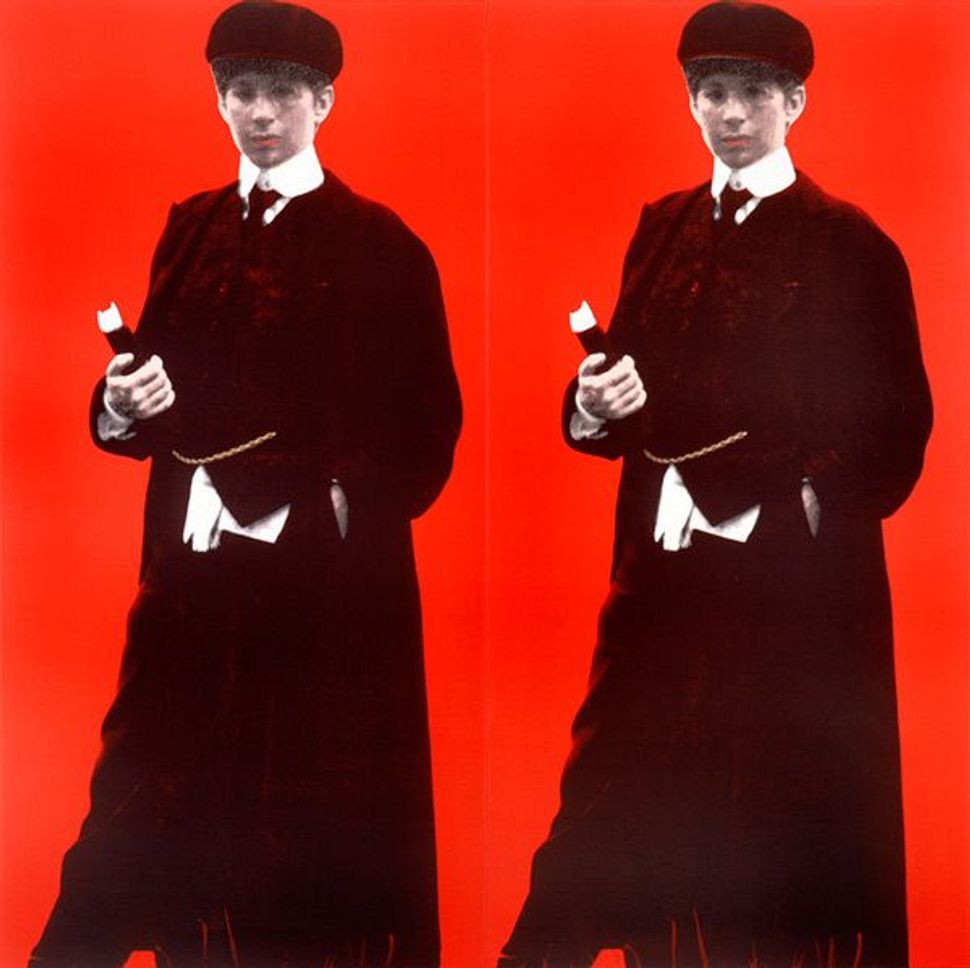 A Woman?s Place is in Her Yeshiva: The Warhol-like image of Streisand by Deborah Kass takes two different icons and makes a new point. Image by THE JEWISH MuSEuM, NEW YORK

Are women-only spaces sexist, or are they progressive? In the cultural and political world, even in schools and religious institutions, the debate has grown over the past few years. Do venues such as art shows, magazines and blogs provide a much needed opportunity for women to communally examine their roles and identities in larger society? Or are they just ghettos for women’s issues, isolating them from the mainstream?

“Shifting the Gaze: Painting and Feminism,” a new exhibit at New York’s Jewish Museum, makes a good case for the existence, at least for now, of distinct women’s spaces. The art in the show, which includes work from the past 50 years, allows visitors to reflect upon the evolution of feminist thought and provides an opportunity to consider the ways in which those ideas are still relevant today. 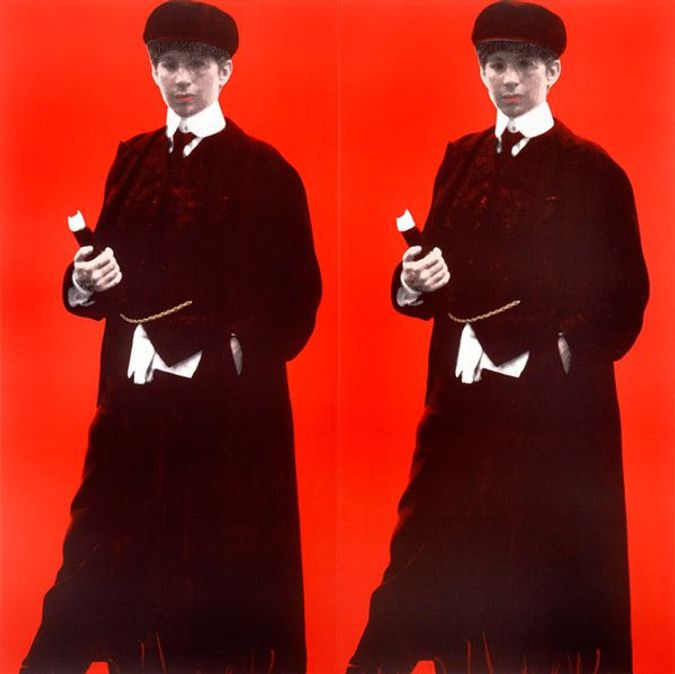 A Woman?s Place is in Her Yeshiva: The Warhol-like image of Streisand by Deborah Kass takes two different icons and makes a new point. Image by THE JEWISH MuSEuM, NEW YORK

The show serves as a retrospective of feminist art and as a cutting, and often funny, commentary on matters of gender and identity in Jewish life. The 32 works, including paintings, sculptures and decorative objects astutely chosen by curator Daniel Belasco, reveal the ways in which feminism, as a politicized identity, has provoked female painters to challenge conventions in the art and religious worlds, as well as to redefine their personal sense of femininity and womanhood in their respective worlds.

The show is divided into six sections and begins by examining women who were part of the Abstract Expressionist movement, with art by Judy Chicago, Miriam Schapiro and Eva Hesse. The work in this section has a physicality to it, from Chicago’s “Sky Flesh,” a mural-sized minimalist grid covered in candy-colored lacquer, to Schapiro’s “Fanfare,” which is an energetic and colorful abstract work in which brush strokes are pronounced. There is an implicit defiance to these paintings, a muscularity that says “I am here” — a bold way to start the show.

The next section, “Painting the Body,” has some of the exhibit’s most provocative work, beginning with Joan Semmel’s 1978 “Sunlight,” a nude self-portrait in which Semmel is looking down at her breasts. The faceless body is cramped on the canvas and spills over the sides, but nonetheless the subject’s posture appears comfortable and alert. Across the way sits Lee Lozano’s painting of a woman’s torso. The subject’s breasts have taken the shape of Stars of David, and a pendant shaped as a nipple hangs around her neck, on a chain. The inversion of the two, one a symbol of Judaism and the other a symbol of femininity, hints at the subordinate role that women have had in Jewish life, one in which their gender takes more prominence than their religious identity.

“Painting Decoration” looks at the way feminists revitalized decorative arts — long the domain of women, and often considered by critics, derisively, as crafts — by using such methods as sewing and quilting in their work. In “Naming II,” Joyce Kozloff re-envisions a map of New York in which the streets carry the names of famous female Jewish artists, writers and performers. Elaine Reichek uses embroidery to examine her life as a Jewish girl in 1950s suburbia in two works taken from her previous installation — “A Postcolonial Kinderhood” — which chronicled her passage into American life. 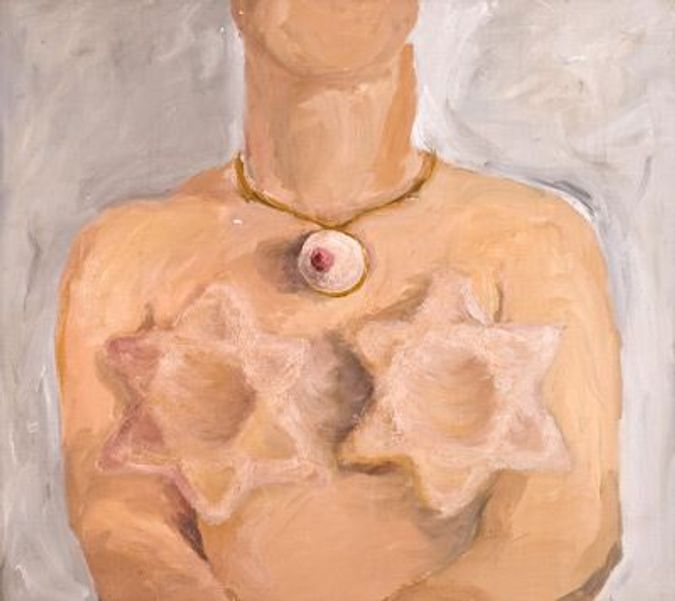 The domesticity of this section is juxtaposed by the themes of war and male aggression in the following one, “Painting Against Violence,” in which such artists as Nancy Spero and her husband, Leon Golub, one of two men included in the show, react to Vietnam and the Holocaust. Golub’s “Napalm Man” shows a charred man — a comment on the aftereffects of male-perpetuated violence in the world. The inclusion of the men in the show, and even the fact that the exhibit is curated by a man, is presented quietly, a subtle reminder that most women’s issues are in fact gender issues, and that an issue like male aggression is often as imprisoning to men as it is to women.

The work in “Painting as Writing,” the fifth section, explores Jewish ritual and philosophy, playing with notions of the way these traditions are used in practical ways, as well as with the way they have been reinterpreted over the ages. Joan Snyder examines loss and mourning in “Study for Morning Requiem With Kaddish,” in which frayed fabric, nails and wire overlay portions of the Kaddish that are carved into a wood board. Dana Frankfort renders a Star of David in bright-orange gestural brushstrokes exploring the power and limits of the symbol, and Melissa Mayer’s “Lillith” features muscular and bright swirls of red and orange on a large canvas. The pieces in this section reveal an intimate, if slightly troubled, relationship with the Jewish religion. There is an evident fondness for Judaism — Snyder and Frankfort represent their subjects with a distinct sense of familial tenderness — but there is also a sense that the artists must actively appropriate what has not always been theirs.

The plucky earnestness of the earlier sections makes way for wit and sass in the final one. “Painting Satire” includes pop art from the 1960s, as well as some contemporary work. Deborah Kass’s “Double Red Yentl, Split” takes inspiration from Andy Warhol’s diptych of Elvis Presley in a cowboy costume, but replaces it with Barbra Streisand in character as Yentl against a bright-red background. Audrey Flack creates a Manischevitz-inspired still life in “Matzo Meal,” a comment on the mass-market Jewish domesticity that pervaded after World War II. In “I’m a Jew how ’bout U?!!” Cary Leibowitz, the other man featured in the show, has childishly scrawled the title across the light-blue canvas, a somewhat friendly poke at efforts of identity and self-representation — a common theme in his art, which often deals with questions of gender and with queer identity.

The works in this section have a leavening effect, a chance to see that, despite their feisty reputation, the feminists are all right. The humor in the work by Kass, Flack and Leibowitz reveals an appealing self-consciousness about the Herculean task of constructing and deconstructing gender: Their art acknowledges both the deep importance of feminism and the fact that transgressing conventions is not just rebellious, but also, sometimes, funny.

The show closes with the brand-new painting “Seder” by Nicole Eisenman, a humorous yet slightly grotesque look at the Passover meal. The painting carries the perspective of the father, who sits at the front of the table and cracks the matzo in half with his oversized deformed hands. His wife gazes firmly at him from across the table with some distance and frustration, as an otherwise visually incongruent cast of characters surrounds the table, disengaged.

Together these paintings create a convincing argument for the relevance not only of a women’s space, but also of a tangible women’s movement, in the art world and in the world at large. Though somewhat brief, the show manages to forcefully take on a broad cross-section of the issues central to feminism over the past 50 years, including violence, beauty, equality, self-expression and, quite literally, the figuring out of women’s place at the table. This is not to say that these works wouldn’t hold their own in retrospectives of the particular movements and times in which each artist worked — but together, in a Jewish women’s space, they manage to say something else.

A Room of Their Own