An Interview With Alice and Moshe Shalvi 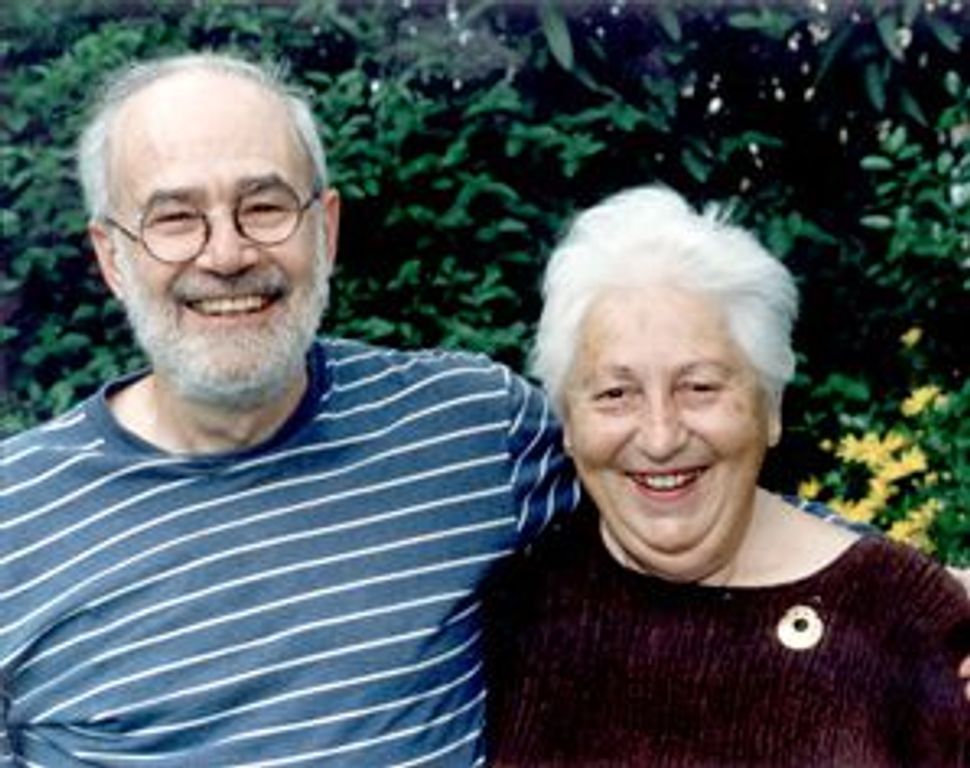 JOINT PROJECT: On the occasion of his 57th wedding anniversary, Moshe Shalvi produced a mammoth digital encyclopedia of Jewish women, as a testament to his wife, Israel Prize laureate Alice Shalvi.

On the occasion of his 57th wedding anniversary, Moshe Shalvi did something a bit unusual: He produced a mammoth digital encyclopedia as a testament to his wife’s work. 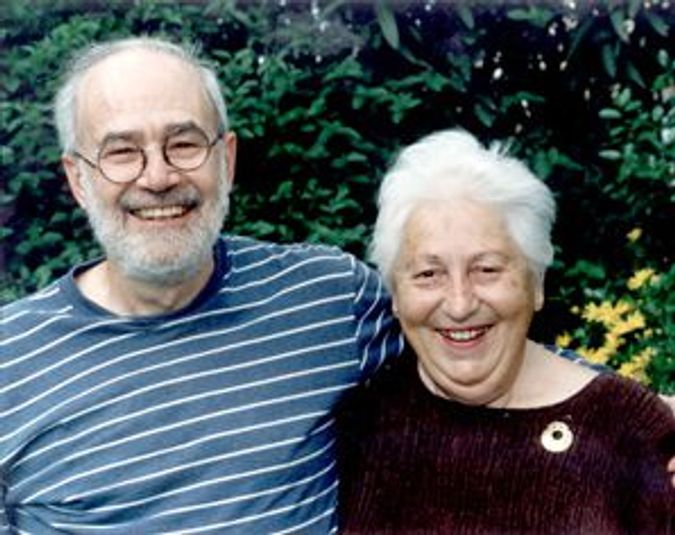 JOINT PROJECT: On the occasion of his 57th wedding anniversary, Moshe Shalvi produced a mammoth digital encyclopedia of Jewish women, as a testament to his wife, Israel Prize laureate Alice Shalvi.

There are another 1,600-odd remarkable Jewish women who appear in the encyclopedia, but the project is in some significant ways mainly about Alice Shalvi. An Israel Prize laureate — scholar, feminist activist and social entrepreneur par excellence — Alice Shalvi has been instrumental in creating not one but four major institutions that have defined Israeli life and thinking about social issues, three of which have been critical in shaping the status of women in Israel. A professor of English by profession, she established the English department at Ben-Gurion University in the Negev in the late 1960s; from 1975 to 1990, she headed the then newly formed Pelech School for Girls, the first Orthodox feminist high school in Israel; in the 1980s, she became the founding chairwoman of the Israel Women’s Network, which was influential in promoting a spate of women-related legislation, including the formation of a Knesset Committee on the Status of Women, and in the 1990s she founded the International Coalition for Agunah Rights. Shalvi, 81, also served as the rector of the Schechter Institute of Jewish Studies, has been active in Palestinian-Jewish women’s peace groups, and has appeared frequently on television and radio programs in Israel and around the world. For all this work, Shalvi was awarded the 2007 Israel Prize for Lifetime Achievement, the country’s highest honor.

Given all this, perhaps only a work of sweeping authority could serve as a testament to Shalvi. Jewish Women: A Comprehensive Historical Encyclopedia was edited by Paula Hyman, the Lucy Moses Professor of Jewish history at Yale University and Dalia Ofer, academic head of Hebrew University’s Avraham Hartman Institute of Contemporary Jewry. The women presented in the encyclopedia are almost all inspiring, sometimes larger than life and at other times shocking in their invisibility. Entries include those on Nobel Prize winners Nadine Gordimer and Rita Levi-Montalcini, astronaut Judith Resnik and political leaders such as Bella Abzug — all of which appear alongside biographies of virtually unknown yet no less remarkable figures, such as 16th-century philanthropist Benvenida Abrabanel, American Revolution patriot Abigail Minis, 19th-century human rights activist Ernestine Rose and 16th-century Italian cantor and poet Devora Ascarelli.

Upon the release of the CD — and a day after the Shavlis’ wedding anniversary — Elana Maryles Sztokman, a lecturer at The Schechter Institute of Jewish Studies and at the Efrata Teacher Training College in Jerusalem, met Alice and Moshe Shalvi in their home in Beit Hakerem, Jerusalem, where they talked about the Israel Prize, the new encyclopedia, women and marriage.

Elana Maryles Sztokman: *The Encyclopedia of Jewish Women, which, if printed, would take up six large volumes, has 2,000 entries, including more than 1,600 biographies of Jewish women from Lilith through the present day, written by leading feminist scholars from around the world. What do you think is the most significant contribution of this work? *

Alice Shalvi: This encyclopedia is of tremendous importance, both in the very fact that it exists and, of course, in terms of its contents, which are really amazing — not only because one recognizes for the first time the tremendous contribution made by Jewish women to Jewish knowledge, to Jewish society and to society at large, but also because of the topical articles which deal with various issues of women’s status in Judaism.

Sztokman: What prompted you to undertake this project?

Moshe Shalvi: Years ago, while working as an editor at Encyclopedia Judaica, I calculated the numbers of characters and entries devoted to women. Of the total of 13 million words of the Encyclopedia Judaica, I found that only 400,000, or around 3%, contained any reference to women. For example, if you look up Nechama Leibowitz, you will find only four or five lines at the end of a column-long entry about her brother, Yeshayahu Leibowitz. That just astounded me.

There are many incredible women, such as Hemda Ben Yehuda, wife of Eliezer Ben Yehuda, who, despite the fact that she was a remarkable woman in her own right, will never appear in a standard encyclopedia. Hemda merits all of 92 words in Encyclopedia Judaica at the end of an entry on her husband. We gave Hemda 3,000 words under her own entry. She deserved at least that.

Sztokman: *What do you hope this encyclopedia achieves? *

Alice Shalvi: I think this work has the potential for changing a lot of attitudes. In particular, I would like to see it used to inspire young women and girls to emulate these women who certainly emerge as role models from the work.

Sztokman: And who have been your role models?

Alice Shalvi: My heroes were two groups of women: the suffragists who were prepared to go to prison and undergo forced feeding, beatings, humiliation, insults and degradation to get the vote; and the women who fought for equality in education, who were subject to discrimination and great ridicule and had to keep proving themselves. Those two groups made me realize that you have to fight for what you feel to be right, to sacrifice and perhaps even be prepared to lay down your life, God forbid, should it demand so great a sacrifice. It’s all about commitment, sticking to what you believe in.

Sztokman: How was it to work on this project together?

Alice Shalvi: The apex of our partnership was in fact our work together on the encyclopedia. Mine was a subsidiary role, but in a way it was my feminist activity and Moshe’s understanding of it and involvement in it and support of it that initially led him to think of creating an encyclopedia on Jewish women. That became his dream. I really felt that the fact that he wanted to do it, the fact that he did it, the fact that he created it with the help of two superb women editors, that he persisted with it, and put so much into it — all this is a kind of summation of our relationship. I feel that it wouldn’t have happened had it not been for our being together, for his being so totally involved and supportive of everything that I was involved with and cared about. It is a kind of summation of our partnership.

Moshe Shalvi: Our 57 years together have been wonderful, absolutely wonderful. Alice is an exceptional human being. And besides being an exceptional human being, she’s also very talented — and very modest about it. When she leaves her own lectures, even after receiving many accolades, she will always whisper to me, ‘Was that good?’ Well, it always is. She’s a remarkable woman.

Alice Shalvi: It’s been a very good, very happy, fruitful marriage. And perhaps one of the most satisfying aspects is the way in which all of our [six] children, particularly the three sons, have really created a really egalitarian marriage with their partners. It’s quite clear that what they saw at home served as a model for them. And they were fortunate in finding partners and perhaps deliberately looked for partners, whether consciously or unconsciously, who they realized would be their equals in the marriage. Ultimately, I think this project has been a wonderful coda to our life together.

An Interview With Alice and Moshe Shalvi