PAPER TRAIL: When Koppel opened the diary, a piece of evidence about its author fell out: A newspaper clipping from the Forverts.

When I first opened the red leather diary, I had no idea of the world that was about to unfold before me and change the course of my life and that of 90-year-old Florence Wolfson Howitt. When I left my apartment one morning in 2003 and encountered a Dumpster full of old steamer trunks, among other artifacts, I recovered the diary, discarded after years of languishing in my building’s storage unit. Its pages revealed the adventures of a young woman growing up in Manhattan in the 1930s.

PAPER TRAIL: When Koppel opened the diary, a piece of evidence about its author fell out: A newspaper clipping from the Forverts. 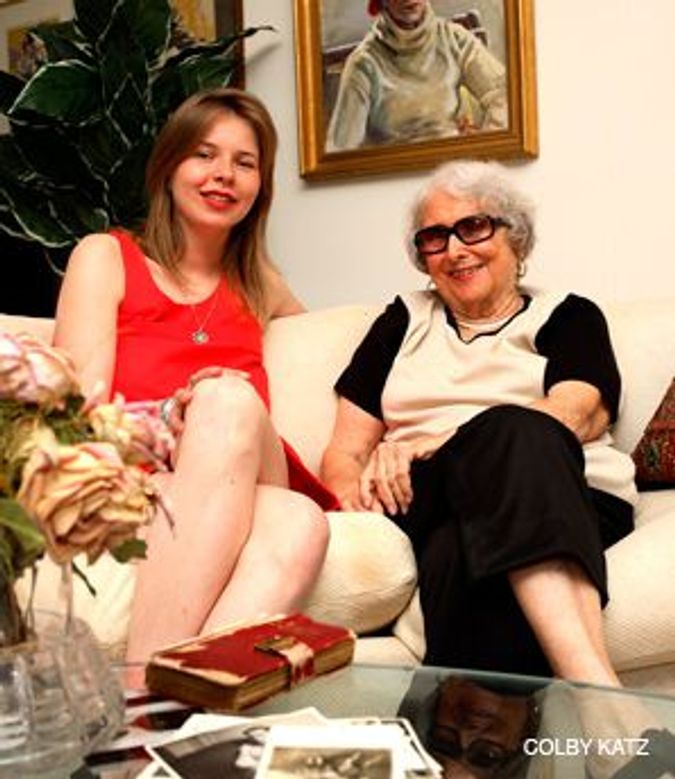 UPPER WEST SIDE STORY: Three years after Koppel first stumbled upon the 1920s diary in her Riverside Drive building?s storage room, she found its author, Florence Wolfson Howitt (above).

Back in my room, holding my breath, I released the brass latch. Despite the rusted keyhole, the diary was unlocked. Little pieces of red leather sprinkled onto my white comforter. From 1929 to 1934, not a single day’s entry had been skipped. The journal painted a vivid picture of 1930s New York — horseback riding in Central Park, summer excursions to the Catskills and an obsession with a famous avant-garde actress, Eva Le Gallienne. Its nearly 2,000 entries, written in faded black ink, captured the passions and ambitious of an intensely creative young Jewish woman. Brief, breathless dispatches filled every page of the five-year chronicle, unfurling into a Manhattan fairy tale.

“Mile Stones Five Year Diary” was written in gold letters across the book’s worn cover. Inside, a blue vine grew around the frontispiece, stamped with a zodiac wheel: “This book belongs to… Florence Wolfson.” The diary seemed to respond to being back in warm hands, its pages becoming unstuck and fanning out. I flipped through the entries, dense with girlish cursive. I could tell it the journal had been cherished. I located the date that Florence began writing: August 11, 1929, the day she received the diary as a gift for her 14th birthday.

As I slipped under the covers, trying to image what Florence might have looked like, a brittle newspaper clipping fell out from between two stuck pages. It was from the Forward, written in Yiddish and English: “Florence Wolfson, of 1391 Madison Ave., who was graduated from Wadleigh H.S. at 15, is the recipient of a State Scholarship.”

Florence’s picture was printed on the clipping. Except for her marcelled blond hair, she appeared completely contemporary, as if she were a young woman of today. Her eyes were sensual and intelligent. I could see myself in her face; we were both writers and painters. Florence seemed so alive, intensely internal and fully engaged with the world around her.

I couldn’t help but read her entries as if they were personal letters to me. Florence and I shared so many of the same longings for love, and the desire to make our own way. As I read her diary, I was drawn into Florence’s day-to-day existence, trips to the theater and escapes to the Museum of Modern Art, which opened in 1929. The Metropolitan Museum of Art, free and almost deserted during the week, was a temple that she wandered in, solitary and content, for hours without seeing a soul.

The diary was a portal into this lost world. I felt as if we were one, this young woman from the ’30s and I. My lavender bedroom filled with an orange glow from the streetlamp outside my second-story windows.

Compelled by the hopes and heartaches and uncanny similarities I shared with her, I set out to find Florence, my only clue her name and address on the Forward clipping. Staring out of the sepia newsprint, her luminous eyes would not let me go. Florence seemed to be saying, “Find me, find me.”

Three years later, I received a chance phone call from a private investigator I’d hired. Searching the city’s birth records, he discovered one Florence Wolfson, born in New York City on August 11, 1915, to a pair of Jewish immigrants from Russia, a doctor and his wife. He led me to Florence Howitt, a 90-year-old woman living with her husband of 67 years, with homes in Westport, Conn., and Pompano Beach, Fla.

One Sunday afternoon in April 2006, eagerly and a bit nervously, I dialed Florence’s Florida number on my cell. After two rings, a refined voice with the command of a stage actress answered. “Hello?” “Florence?”

I met Florence for the first time in May 2006 in Westport, where she lived with her 95-year-old husband, Nathan Howitt, a retired oral surgeon who was one of many admirers from her youth.

Florence hugged me. She was an ageless phenom, full of spunk. During weekly Sunday visits over bagels and lox, we got to know each other. Reunited with her diary, Florence journeyed back to the girl she had been, rediscovering a lost self that had burned with creative fervor.

Florence was one of a generation of Depression-stamped young men and women who longed to cultivate a creative life. As a 19-year-old Columbia graduate student, she hosted a literary salon in her parents’ apartment. Her friends, the young poets Delmore Schwartz and John Berryman, were members.

During our talks, Florence showed me old photographs. Scalloped-edged black-and-white images re-created the half-forgotten world of the sophisticated young Manhattanite who grew up on the Upper East Side. In the snapshots, Florence is outfitted in clothes designed by her mother, a couture dressmaker with a shop on Madison Avenue. Her mother had come to America alone as a teenager and worked her way up to being a respected business owner, a rare accomplishment in those days.

Stern family portraits projected the intellectual strength and fearlessness of the Wolfsons. Both of Florence’s parents came from families of prominent rabbis and went to work the day they arrived in this country.

After Florence married, she drifted from her art and admitted that later in life she took on “a country club mentality.” As she fingered the pages of the leather-bound book crumbling in her hands, she reflected on the young woman brought to life so vividly in its pages.

Last April, Florence’s husband died. I learned from her diary that they had met when she was 13 at Spring Lake, his parents’ Catskills hotel. I flew down to Florida to be with her. “Lily and her new grandmother,” Florence said, as we took a photo. “You’ve brought back my life.”

Lily Koppel writes for The New York Times and other publications. She is the author of the recently published “The Red Leather Diary: Reclaiming a Life Through the Pages of a Lost Journal” (HarperCollins).