One Image To Make Man and Woman? 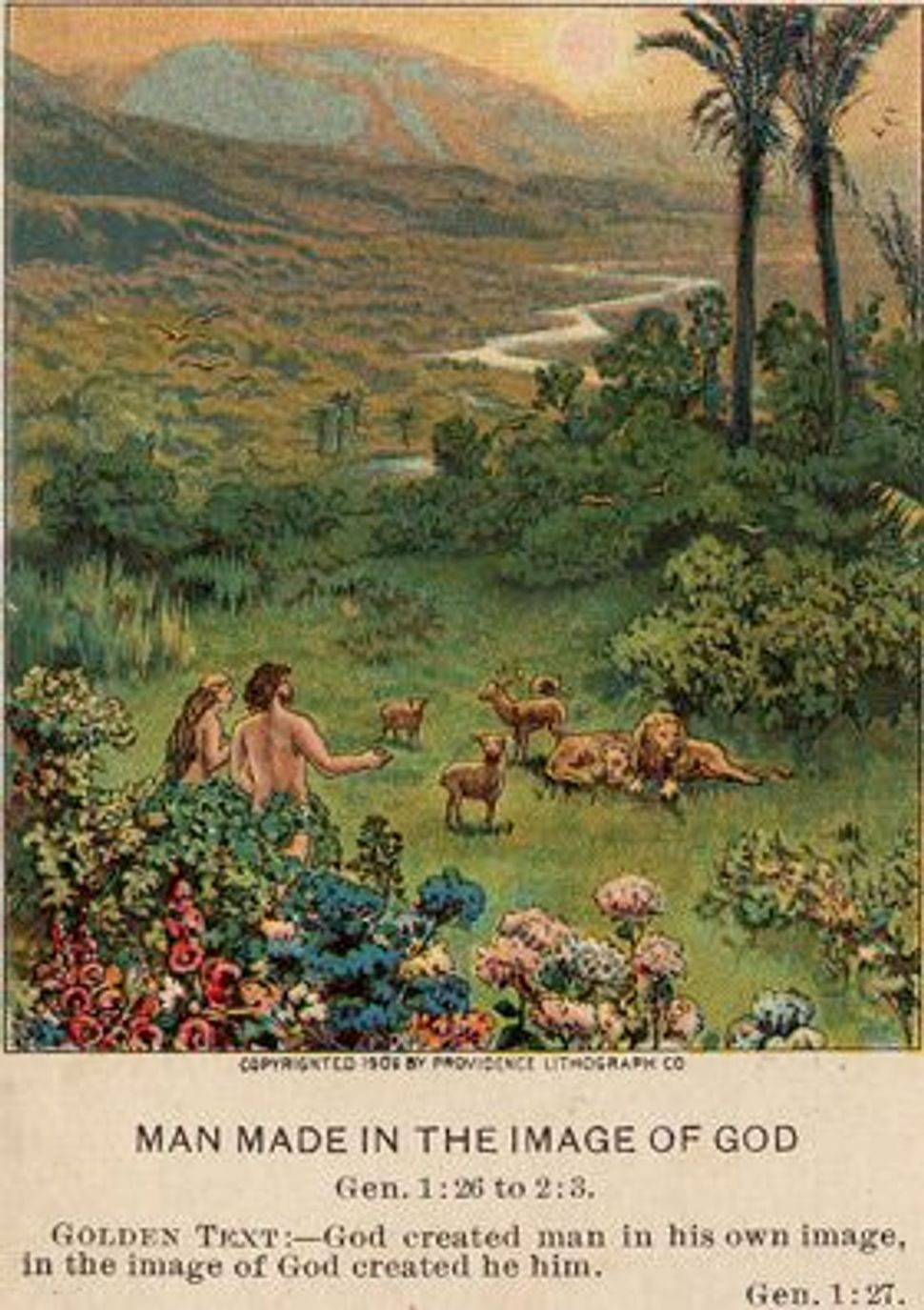 Paradise: Adam and Eve standing suspiciously close to the bushes, perhaps in case the lion and the lamb don?t lie down nicely together. Image by WIkI COMMONS

Probably no section of the Bible has more exercised the interpretative powers of its readers than the opening chapters of the Book of Genesis, with which we again begin the annual cycle of Torah readings on Simchat Torah — and, arguably, no two verses in these chapters have aroused more discussion over the ages than Genesis 1:26–27. There we read: “And God said, ‘Let us make man in our image, after our likeness…. And God created man in his image, in the image of God [b’tselem elohim] he created him; male and female he created them.”

One is assailed by questions. Who was God talking to when he said, “Let us make man”? Did God first create Adam as a “him” and only later create a female from this “him,” as we are told by Chapter 2 of Genesis, or is the “him” of Chapter 1 an androgynously imagined being with both male and female characteristics? And what does it mean to be created in God’s “image”?

There are linguistic points to be made in regard to each of these issues. One might observe, for instance, that although elohim, the Hebrew word for “God,” has a plural ending, this does not explain the use in Genesis 1:26 of the plural verb “let us make” (na’aseh), since elohim in the Bible almost always takes a singular verb; or that the noun adam, “man” or “person,” is masculine in gender, so the “him” of Genesis 1:27 can be understood, if one wishes, as a mere grammatical form rather than as a statement concerning Adam’s sex. And one also might remark that the Hebrew word traditionally translated as “image,” tselem, has a close cognate in Akkadian s.almu (the dot under the “s” indicates a retroflex articulation, with the tongue curled back against the palate), which helps to throw light on the word’s use in Genesis.

Long extinct, Akkadian, a cousin of Hebrew, was the Semitic language spoken in Babylonia from about 3,000 BCE to the beginning of the Christian era. Its cuneiform writing, generally inscribed in wet clay that hardened and was unearthed in vast quantities in 19th- and 20th-century archeological digs, has transmitted to us thousands of ancient texts, such as the Code of Hammurabi and the great poem of Gilgamesh. And in many of these texts we find the word s.almu, in the sense of a statue, an idol or a representation of a god. (To this day, the word can denote a statue in certain Assyrian dialects still spoken in northern Iraq, northeastern Syria and southwestern Turkey.) It is probably related to the Akkadian verb salamu, “to grow dark,” the connection being that shadows are dark images thrown on the ground or on a wall.

In itself, none of this should surprise anyone who knows biblical Hebrew. Tselem in the Bible is frequently a pejorative word for an idol, and in at least one place, Psalms 39:7, it apparently means “a shadow,” the common Hebrew word for which is tsel. (In medieval Hebrew and Yiddish, tselem also came to mean, first, a Christian icon of Jesus on the cross, and eventually, a cross itself , but that is another story, as is that of the verb l’tsalem taking on the meaning of “to photograph” in modern Hebrew, and matslema, of “a camera.”)

What is more interesting, rather, are two things. The first is that in Akkadian texts, Babylonian kings or rulers are sometimes referred to as the s.almu of this or that god; one such inscription that has come down to us, for example, written by a royal scribe, reads abusu sa sarri beliya s.alam bel su, “the father of the king my master was the s.almu of [the god] Bel.” The second is that the s.almu was conceived as being not just a representation of the god, but the god’s potential abode. In a common Babylonian temple ceremony known as “the opening of the mouth,” the god was thought to infuse his or her spirit into the s.almu by breathing into it, just as God breathes life into Adam in the biblical story of Creation.

Is the biblical tselem elohim, then, simply a Hebraic transposition of the Babylonian s.almu? Not really. One difference is that whereas in Babylon, only a king could be a god’s s.almu, in the Bible, every human being is created in God’s image: There is, as it were, a democratization or universalization of man’s divine nature. Another difference is that the Babylonian god of whom the king was a s.almu was conceived of as having physical attributes, while the God of the Bible may not have been.

May not have been, you ask? Does that also mean He may have been? Actually, yes. Although it seems hard to imagine today, there is considerable evidence that as late as the Middle Ages, there were Jews who thought of God as having a body of which the human form was a physical image. Surely Maimonides, who lived in the 12th century, would not have spent so much time attacking this idea in his “Guide for the Perplexed” if it did not exist. Ultimately, not even Akkadian s.almu can solve the mystery of what exactly “in the image of God” means in the Bible.

One Image To Make Man and Woman?