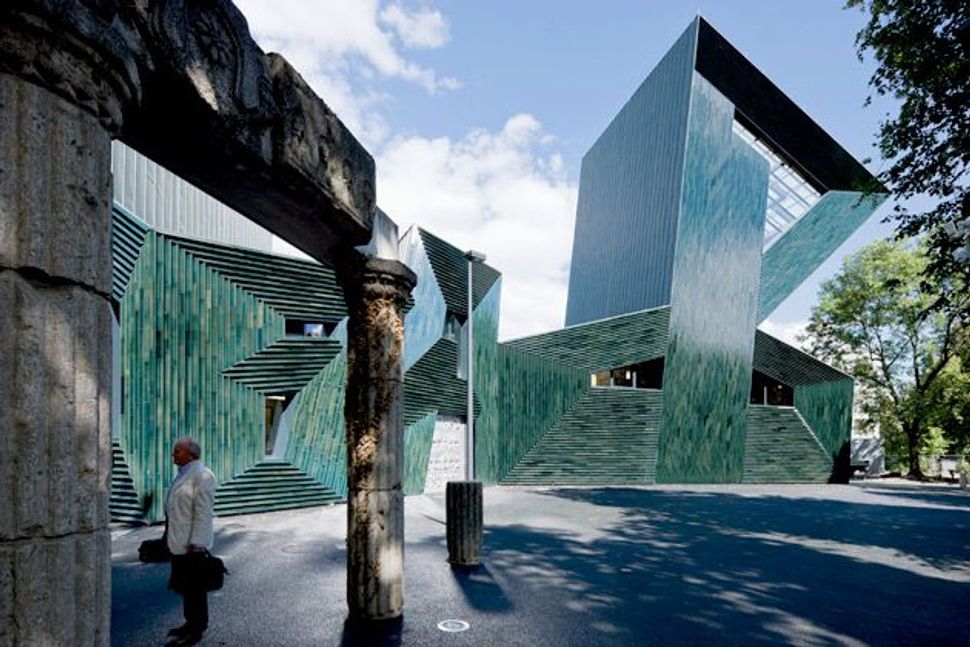 Transcending the Past: Standing next to the classical ruins of Mainz?s prewar synagogue, Manuel Herz?s boldly deconstructivist synagogue points to the future. Image by IWAN BAAN

The construction of a new synagogue is always an occasion for celebration, so it was with particular pomp that the Rhineland city of Mainz recently dedicated its new synagogue and Jewish community center. The dedication ceremonies, held September 3, featured an array of German politicians, including German President Christian Wulff. Many of them blessed the new building and underscored its symbolic significance. Yet, while the synagogue received its share of blessings, it also gave physical expression to them in its architectural form. Designed by the German-Jewish architect Manuel Herz, Mainz’s striking new synagogue complex traces its inspiration back to the third “blessing” in the Amidah — the Kedusha. The connection between the word and the synagogue’s appearance is not immediately obvious. But Herz’s drawings for the building reveal that its sawtooth form partly derives from the jagged pattern produced by the word’s five Hebrew letters: kuf, daled, vav, shin and hay. 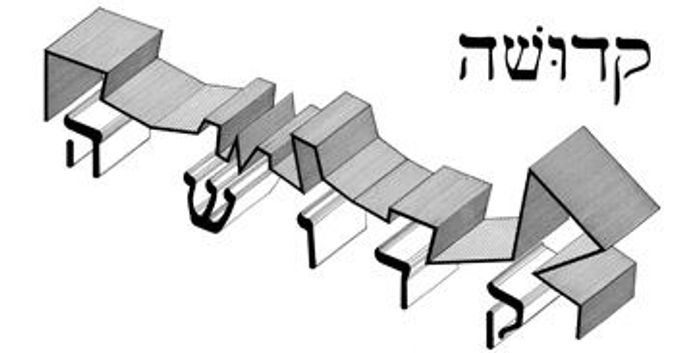 Herz’s design represents a notable effort to draw on novel sources of inspiration to produce a distinctively Jewish form of synagogue architecture. While Hebrew words have, on occasion, given abstract shape to the floor plans of certain Jewish buildings (most notably, Daniel Libeskind’s Jewish museums in Copenhagen, Denmark and San Francisco), they have seldom determined these buildings’ elevations. By contrast, the striking exterior of Herz’s design — for example, the debt that the bold, angular synagogue sanctuary owes to the letter kuf — makes clear how written language can generate new and distinct kinds of architectural forms.

The literal inspiration for Herz’s design is not mere words, however, but the larger Jewish textual tradition. In explaining his design in recent interviews, Herz has cited the time-honored Jewish idea that the letters of the Hebrew alphabet are divinely given and possess “architectural qualities.” He has noted, for example, that the synagogue’s kuf-derived form resembles an upright shofar, whose Eastern orientation expresses both “a listening to God” and a “calling together of the Jewish community” to prayer. Herz’s inclusion of a large skylight with mullions that is shaped like a page of the Talmud further shows how his design draws on the Jewish textual tradition.

But that design goes beyond Jewish religious inspiration and draws on Jewish history, as well. Inevitably, any new synagogue built today in Germany has to contend with the legacy of Nazism in one way or another. Herz’s is no different; however, it does so in novel fashion.

Among the nearly 30 synagogues built in Germany since the country’s unification in 1990, most have followed one of two approaches in dealing with the Nazi legacy. Some synagogues, such as those by German-Jewish architect Alfred Jacoby, have been sober modernist designs that have attempted to fit smoothly into their larger urban environments; in so doing, they have strived to help German Jews integrate into German society, achieve a new sense of normalcy and move beyond the Nazi past.

By contrast, other synagogues, such as those designed by the German firm Wandel, Hoefer, Lorch and Hirsch, have assertively stood out from their settings and alluded to the Nazi experience more directly. The firm’s celebrated New Dresden Synagogue from 2001, for example, refers in its plan to the famed 19th century synagogue by Gottfried Semper that stood on the site until being destroyed by the Nazis in 1938.

Herz’s synagogue takes a third path. While it strives for normalcy, it does so not so much by trying to fit into its environment as by standing apart from that environment through a boldly assertive form of architectural expressionism.

Herz’s pursuit of normalcy was seen early in the planning process, when the architect rejected suggestions that his design symbolically refer to the previous synagogue on the site, which, built in 1912, was destroyed by the Nazis on Kristallnacht. Insisting that alluding to the “Nazis’ act of destruction” would amount to a form of self-imprisonment, Herz asserted that it was “impermissible for the Holocaust… to become the foundation of the new.” Instead, like Jacoby, he preferred to keep the Holocaust’s legacy in the background and concentrate on giving the local Jewish community a “sense of uplift” by designing a more forward-looking building. He did agree, however, to preserve the prewar synagogue’s ruins on the site.

Yet in pursuing this goal, Herz differed from Jacoby by embracing a more extroverted design. Both in its sharply angled forms and its unconventional cladding (the synagogue is covered with a gray grooved ceramic material that is meant to evoke the natural striations of a shofar), the synagogue stands out dramatically from its modernist postwar neighborhood.

In so doing, it displays the influence of deconstructivism and the work of architects like Libeskind. (Perhaps not coincidentally, Herz worked in Libeskind’s office in the 1990s.) But there is a major difference. While Libeskind’s German projects, such as his Berlin and Osnabrück museums, were meant to attract the attention of Germans and to remind them of the past, Herz’s synagogue is oriented more toward a Jewish audience and toward communicating a message about the future. Indeed, Herz wants German Jews to understand that they can no longer “integrate by being inconspicuous” (as was common for much of the postwar period) but need to display a new kind of “visibility” in the built environment. The Mainz synagogue is meant to symbolize a new stage in the German-Jewish community’s maturation.

It is unclear whether the Jews of Mainz are ready for the spotlight, but they have decisively entered it. Two days after the synagogue’s formal dedication, more than 10,000 local citizens stood for hours on long lines to tour the building as part of an “open house” day of festivities. Only time will tell whether the synagogue will promote the often hoped for goal of German-Jewish reconciliation. But by ambitiously striving

to move beyond the darkest chapter of German-Jewish history, Mainz’s new synagogue marks an important milestone in the German-Jewish community’s long postwar pursuit of normalcy.

Gavriel Rosenfeld is associate professor of history at Fairfield University. His book, “Building After Auschwitz: Jewish Architecture and Jewish Memory Since the Holocaust,” is forthcoming from Yale University Press in the fall of 2011.