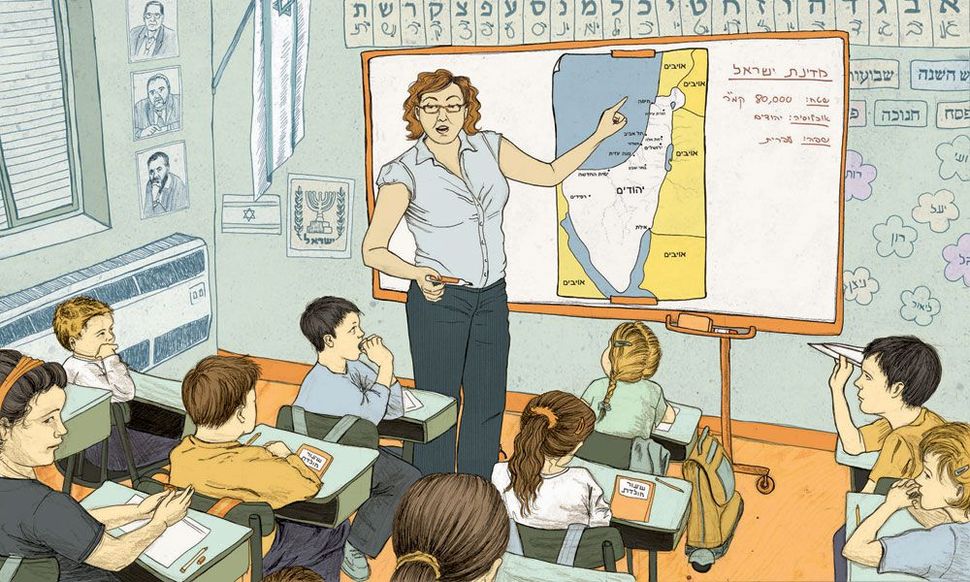 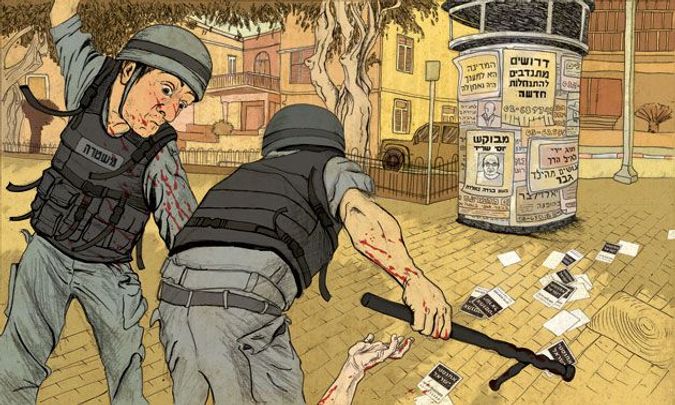 No Amnesty: Israel?s right-wing movement Im Tirtzu has made headlines and inspired opposition protests for its campaign to delegitimize Israeli Academia, which it views as dominated by anti-Zionist professors. ?Internal Security? shows a future of violent repression that is one outcome of such a campaign.

In the world of comics, Israel has a long and lively culture of illustrated political commentary. There’s even an Israeli Museum of Caricature and Comics in Holon to honor that tradition. Contemporary work from graphic novelists such as Rutu Modan, Yirmi Pinkus and Asaf Hanuka is attracting international raves, and the scene is filled with emerging talent. The young artist Sivan Hurvitz stands out, though, for her highly controversial series, “Turn Right at the End.” Based on her senior undergraduate thesis at the Holon Institute of Technology, the show imaginatively critiques what she and many others perceive as alarmingly anti-democratic and intolerant tendencies in contemporary Israel. Set in possible future Israels, Hurvitz’s scenes may repel some and provoke sadness, recognition or unease in others, but her visceral imagery will leave nobody untouched. Her Zion, rendered as both familiar and unknown, is at a turning point in its history.

Born and raised on a kibbutz, Hurvitz feels she was encouraged to be vigilant regarding social injustices, but she traces her recent disenchantment to the Gaza military campaign. She is worried by the crucial unresolved tension that lies at the heart of the Israeli state, namely its designation as “Jewish and democratic.”

Which is paramount? Judaism or democracy? Before I am a woman, or Jewish, or Israeli, I am human. And I believe that rights should be based on our humanity, not on whether we are Jewish or not, or how Jewish we are or aren’t. This is the home for the Jewish people, and it must stay that way, but there are also non-Jewish people here… a real democracy should protect their right to keep their national, religious and cultural identity.

Using her own photographs as starting points, she pencils in shadows and textures, inks outlines and completes the coloring with Photoshop. She embraces a bold photorealistic style because it is “contemporary and communicative,” giving her work a sense of immediacy. In each of her searing illustrations of a future totalitarian regime, Hurvitz begins with contemporary Israeli life and gazes a little further down the road at the dire consequences of public apathy about democratic institutions and human rights. Based on recent events, her provocative visual narratives (subtitled “The Future of a Country That Gave Up on Democracy”) are potential prophecies that Hurvitz hopes will inspire more attention to “pluralism, human rights and freedom of speech.” 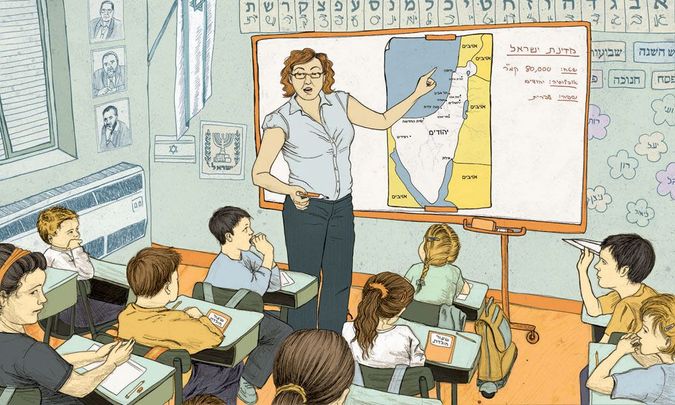 Click for larger image In ?Dark Education,? a teacher stands before a wall portraying faces of Zionist leaders and a ?Greater Israel? map. Hurvitz?s caption decries the government?s approach to education.

Though Hurvitz’s scenarios of fascism taking root are caricatures, the stark language that accompanies “Internal Security” underscores her well-founded fears: “Following the publication of the Goldstone [Report’s] conclusions, that accuse both Israel and Hamas of war crimes, the ‘Im Tirtzu’ movement launched a media campaign that presents Human Rights organizations as collaborators with the enemy…. What followed in May 2010 was a legislative bill that proposed the delegitimization of all Israeli organizations… providing information to foreign authorities in order to bring to justice military officers and politicians suspected of committing war crimes.” It alarms her and others that the controversial movement received affirmative nods from government officials.

Elsewhere, Hurvitz presents unregenerate cityscapes of fearful, shadowy interactions. Many Israelis were surprised by the government’s refusal in May to admit the renowned linguist and Israel critic Noam Chomsky into the territories to lecture at Birzeit University. Hurvitz’s caption for “Against the Spirit” observes: “The Ministry of Internal Affairs confirmed that the decision was theirs and within the bounds of [their] jurisdiction. In an interview, Chomsky mentioned that he was told that the government does not approve of his opinions and of the fact that he chose to visit Birzeit University instead of an Israeli university.” In the melancholy hues of twilight, ominously suggesting a society descending into darkness, two nervous dwellers of a Hebrew city covertly exchange a “subversive” novel by novelist and peace activist David Grossman. The scene is imbued with dark, foreboding tension.

In other images, Hurvitz grapples with controversies concerning the so-called “Loyalty Law,” a legislative bill endorsed by the right-wing Yisrael Beiteinu (Israel Our Home) party; homophobia; the anti-democratic tendencies of Avigdor Lieberman and Jewish demographic anxieties regarding Israel’s Arab citizens. Whatever Hurvitz’s subject, each of the artist’s vignettes (pointedly featuring quotidian spaces such as classrooms, cafes and public squares) is drawn with piercing simplicity. Perhaps the greatest provocation of these vignettes is that they are so clearly set in the liberal-leaning cosmopolitan spaces of Tel Aviv.

When asked what she most admires about her society, Hurvitz fiercely defends its enduring capacity for intense self-scrutiny and warmly praises the demonstrators at Sheikh Jarrah, an East Jerusalem neighborhood where hundreds of Israelis gather every Friday afternoon to protest the settlers who have forced Palestinians from their homes. Culture Minister Limor Livnat’s strong condemnation of the Israeli actors and artists who recently refused to perform in the West Bank settlement of Ariel’s new cultural center angered Hurvitz, leaving her further persuaded of the urgency of her own work. “She said they should separate art from politics. That’s ridiculous,” she said. “Art is always political, even if you make art that doesn’t directly relate to political matters, you are still making a statement by avoiding it. I know we live in a very complicated reality, where things aren’t just black or white; however, the recent deterioration in democratic values isn’t something that would have been accepted in the past, and is not something that we should accept now, despite security threats. This is what led me to this project. I wanted to ask, ‘Where is this leading us?’”

Ranen Omer-Sherman is co-editor of “War and Narrative in Israeli Society and Culture,” forthcoming from Wayne State University Press. He is a professor of English and Jewish studies at the University of Miami.