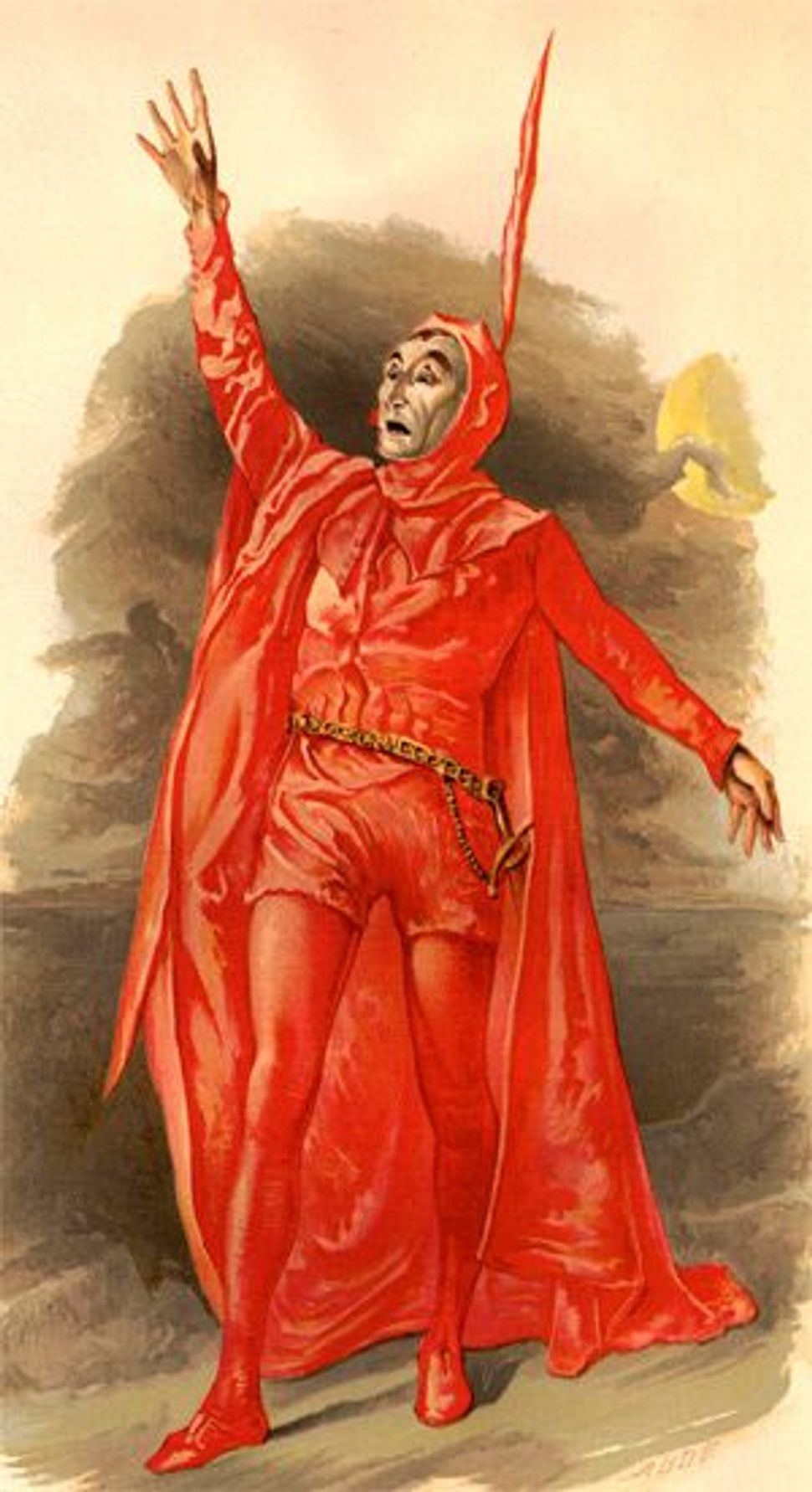 Sulphur and Spandex: Sir Henry Irving dressed as Mephistopheles in 1885

Jack Rosenthal of Mamaroneck, N.Y., writes to me about the Satanic image of the Jew in medieval Christian culture and, specifically, about the words “Mephistopheles” and “Satan.” “Satan,” of course, comes from the Bible, most familiarly from the Book of Job, and Mr. Rosenthal proposes a Hebrew etymology for “Mephistopheles,” as well. This he does by linking it to the words mefitz-tofel, “spreader-smearer [of lies].” 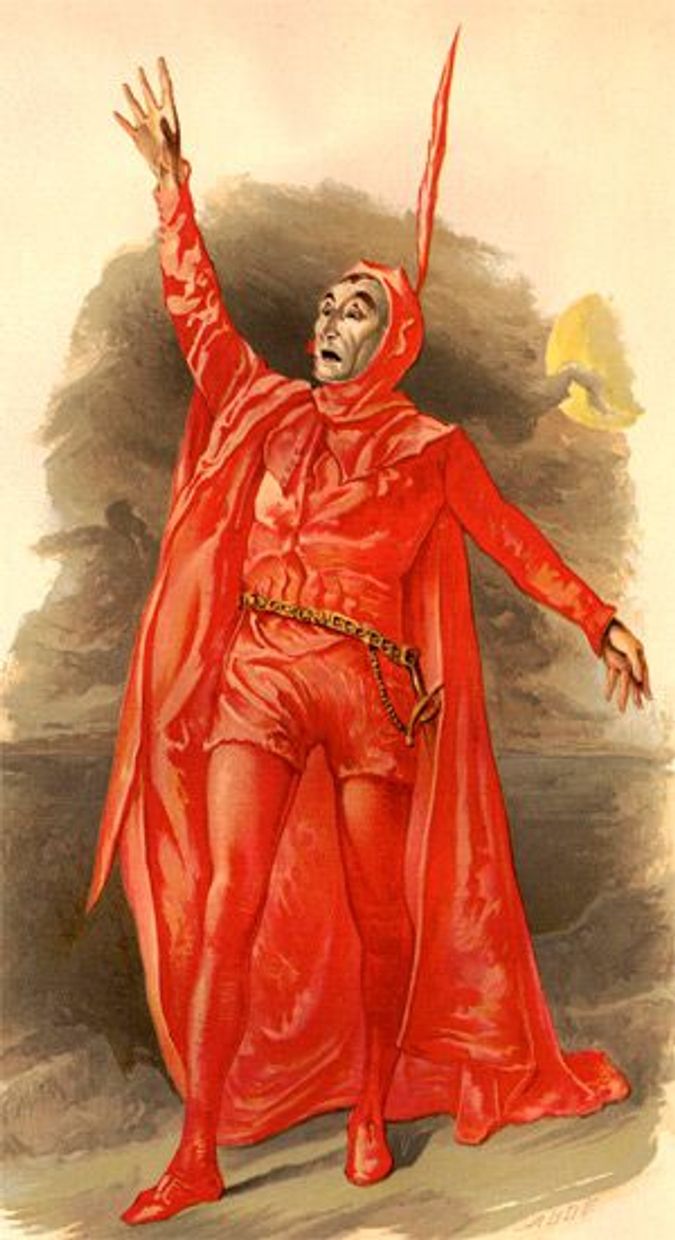 Sulphur and Spandex: Sir Henry Irving dressed as Mephistopheles in 1885

This is not a very supportable theory. Not only does the combination mefitz-tofel occur in no known Hebrew text, but the real derivation of “Mephistopheles” is hardly a mystery. True, the standard dictionaries treat it as one, telling us only that the name first appears in the anonymously authored late 16th-century German Faustbuch, an early version of the story of the man who sold his soul to the devil that is better known from Goethe’s “Faust.” Yet the actual etymology of Mephistopheles is staring the reader of these same dictionaries in the face — quite literally so, because in any good dictionary, the word directly following Mephistopheles is “mephitic,” defined as “noxious” or “offensive to the smell.”

“Mephitic” comes from the name of the ancient Samnite goddess Mephitis. The Samnites, or inhabitants of Samnium, were neighbors of the early Romans, and Mephitis was believed by them to preside over the underworld and over the foul exhalations erupting from it in bogs and lakes. There were temples built in her honor, and she is mentioned in classical literature. The author of the Faustbuch, guided by the common association of the devil with the underworld and sulfurous smells, clearly changed her name to Mephisto and added to it a suffix echoing Greek philos, “friend [of].” (It is Mephitis, incidentally, who has also given us the scientific name of the common striped skunk, mephitis mephitis.)

As for Hebrew satan, there have been two different explanations of its origins. The generally accepted one — correctly so, in my opinion — traces it to the Hebrew verbal root s-t-n, meaning “to oppose” or be adversarial and closely related to the root s-t-m, to hate. This is how the ancient rabbis understood it and how it was understood by the Bible’s first translators, those of the Greek Septuagint, who rendered satan as diabolos, “slanderer” or “accuser,” from the Greek verb diabalein, “to speak evil of someone.” It is from here, via Latin, that we get the English word “devil.”

At the same time, a minority opinion has preferred to connect satan with the root sh-u-t, meaning “to roam,” a word found in the devil’s answer to God’s query of “Whence comest thou?” in Job’s opening chapter — viz., “From roaming [mi’shut] the earth and roving about it.” The first to advance this view was apparently the 18th-century Dutch scholar Albert Schultens, who thought that the satan or “roamer” was an angel commissioned by God to circulate among men and report on their misdeeds. Though I myself find little to recommend it, Schultens’s etymology has been taken seriously by two of modern Hebrew’s leading lexicographers, Eliezer Ben-Yehuda and Avraham Even-Shoshan, both of whom propose it as a possibility in their dictionaries.

What is less clear, I think, is whether the word satan in the Book of Job is a proper name or an ordinary noun — that is, whether the book’s author conceived of Job’s accuser as a unique figure named Satan or as an anonymous spirit, one of many, whose job it was to keep God informed of suspicious happenings on earth. This is not a question that can be answered by biblical grammar. On the one hand, this figure is referred to by the Book of Job not as satan, but as ha-satan, “the satan,” and Hebrew is not a language like Greek or German, in which proper names can take the definite article. On the other hand, however, if we interpret satan not as a given name but as an epithet or nickname, like “the Terrible [One]” in “Ivan the Terrible,” there is no reason for ha- not to precede it. Hebrew does not have capital letters, but if it did, we might rephrase the question as follows: Is Job’s accuser “the slanderer,” an unfriendly or envious angel who has taken on himself the task of denouncing Job, or “the Slanderer,” a high personage whose title that is?

The translators of the Septuagint, who rendered ha-satan as ho (the) diabolos with a small delta (Greek does have capital letters), preferred the former interpretation. Yet in the Greek New Testament, where ho diabolos is sometimes found, we frequently encounter ho Satanas with a capital sigma, indicating that Satan is the proper name of the chief of all devils. It is from here that the concept of “the Devil” — the personified ruler of a kingdom of evil semi-independent of God — enters Western thought, since while the Greeks certainly believed in evil spirits, they did not, prior to Christianity, assign to them a single leader. To return to Mr. Rosenthal’s letter, Christianity not only associated the Jews with the devil, but also took the idea of the devil from them and developed it to far greater lengths than Judaism ever did.