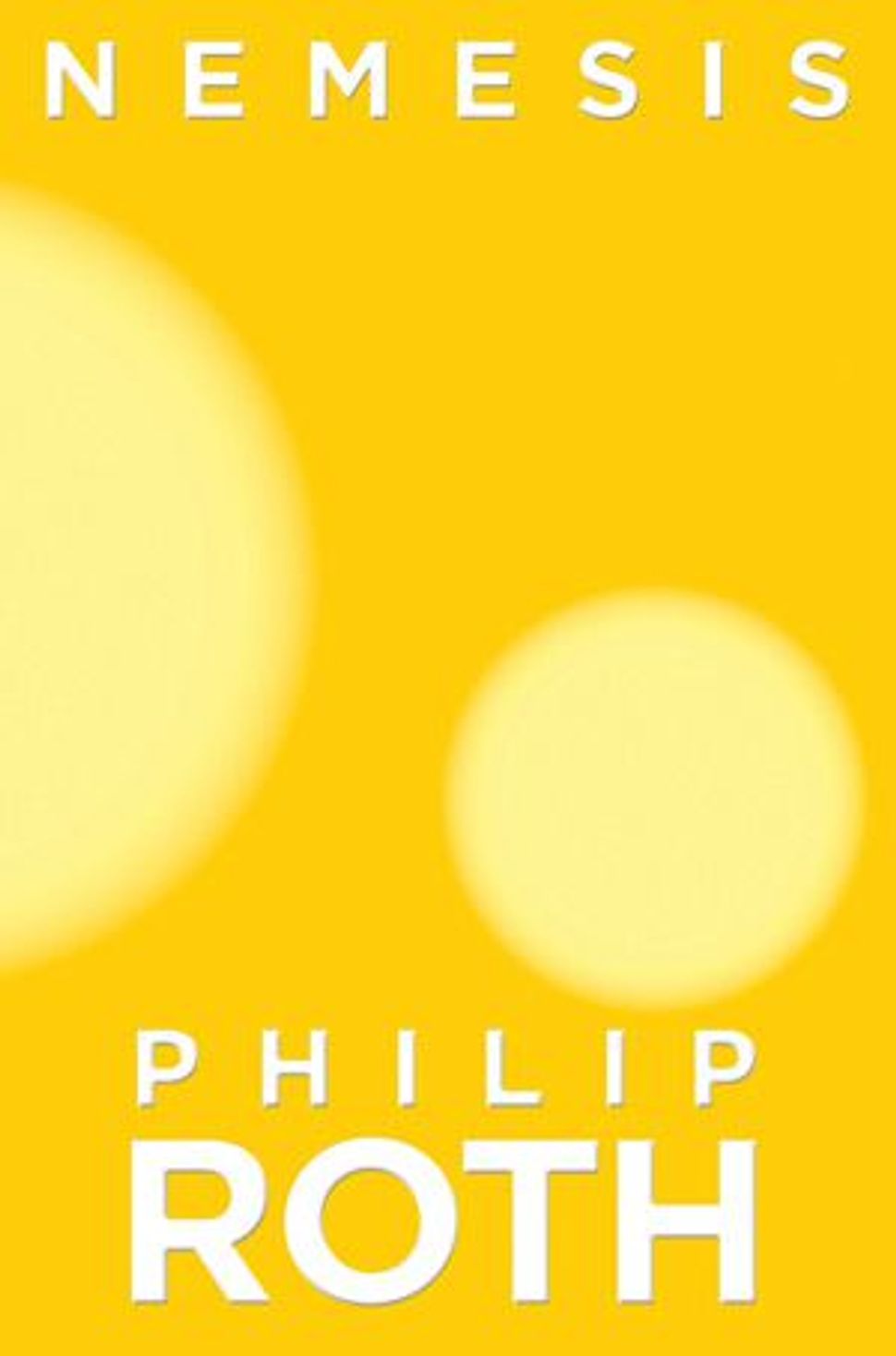 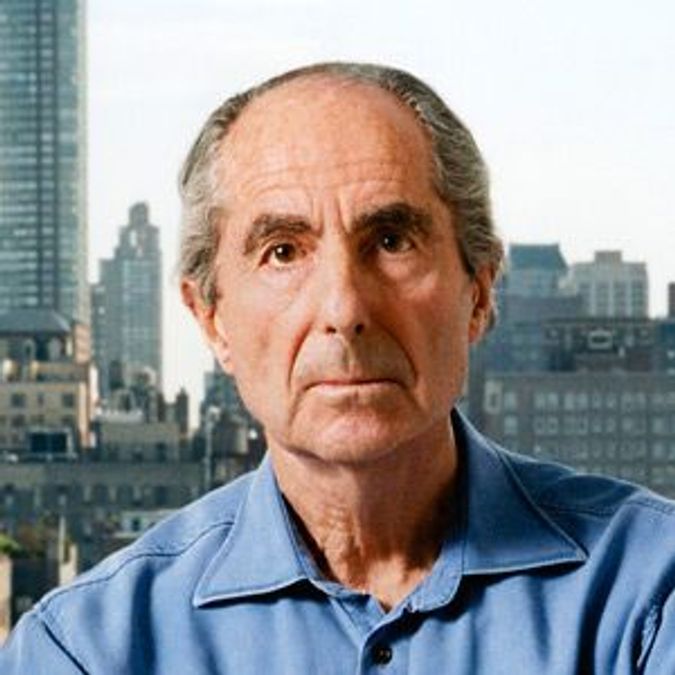 Mortality: ?Nemesis? is the latest of five books in which Roth faces death. Image by NANCY CRAMPTON

‘The first time I saw Brenda she asked me to hold her glasses. Then she stepped out to the edge of the diving board and looked foggily into the pool; it could have been drained, myopic Brenda would never have known it.” These very first lines of “Goodbye, Columbus,” the dazzling novella that in 1960 earned Philip Roth, at 27, a National Book Award, are reprised half a century later, surely not by coincidence, in his spare and haunting new novel, “Nemesis.”

It’s the hot summer of 1944. Bucky Cantor, a 23-year-old gym teacher from Newark, N.J. — a superb athlete, 5 foot 5 and a weightlifter, but 4-F for poor eyesight — has left the city to replace the drafted waterfront director at a Jewish summer camp called Indian Hill:

He walked out along the narrow wooden pier that led to the high board, removed his glasses, and set them at the foot of the ladder. Then, half blind, he climbed to the board. Looking out, he could see his way to the edge of the board but distinguish little beyond that…. He filled his lungs with the harmless clean air of the Pocono Mountains, then bounded three steps forward, took off, and in control of every inch of his body through the blind flight, did a simple swan dive into water he could see only the instant before his arms broke neatly through and he plumbed the cold purity of the lake to its depths. 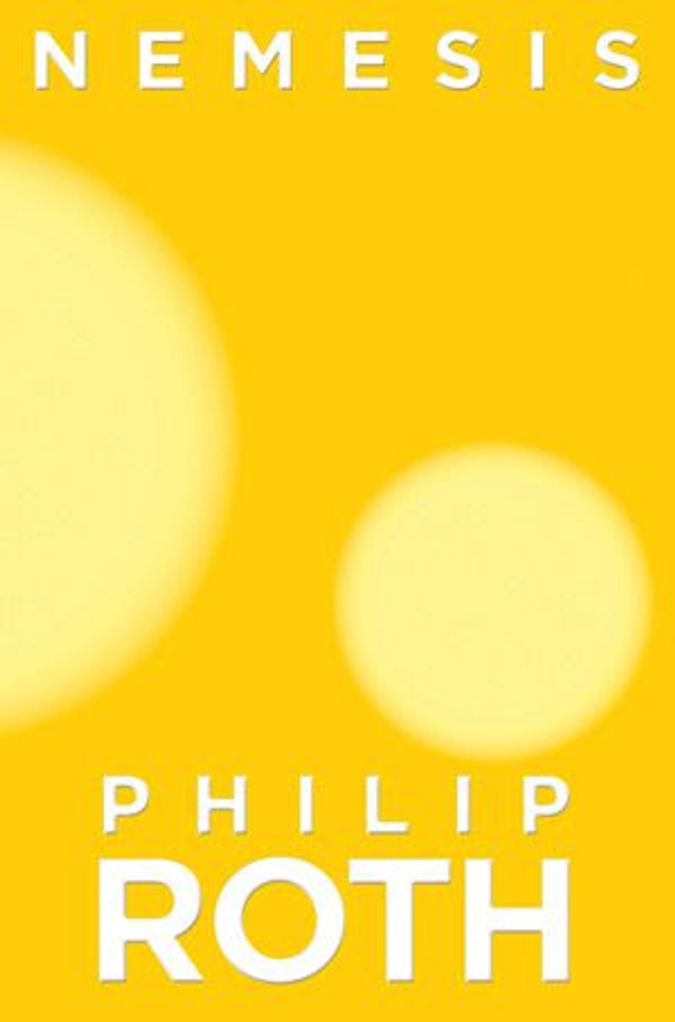 Nobody can spin a sentence like Roth. Since 2006, neither drained nor myopic, he has published in rapid succession five short novels, whose titles — “Everyman,” “Exit Ghost,” “Indignation,” “The Humbling” and “Nemesis” — announce a preoccupation, natural enough in a man of his age, with mortality and its discontents. What happens when disease strikes and the body fails? How, then, to navigate the “blind flight”? These small volumes may seem, to some readers, like a tapering-off after Roth’s mighty streak — “Operation Shylock,” the “American Pastoral” trilogy, “The Plot Against America” — but to a guy like me, in his early 60s, they seem destined to be read in the future as a canonical Five Books, and perhaps as prime exemplars of the “intransigence, difficulty, and unresolved contradiction” that critic Edward Said explored in his posthumous book, “On Late Style.”

“Nemesis” is a novel in three meticulous and suspenseful acts, as tragic as its title portends. The theme is Hellenic — in Greek mythology, the goddess Nemesis metes out punishment for hubris — and the variations are Hebraic, as evidenced by the monikers of the minor players: Herbie Steinmark, Erwin Frankel; Ronald Graubard; Alan Michaels; Arnie Mesnikoff, and the Kopferman brothers, Danny and Myron. As the book opens, these schoolboys are spending the summer at a sweltering urban playground supervised by the dedicated, highly principled Bucky Cantor, whom they all idolize.

The nameless narrator is identified in the opening sentence as one of the boys: “The first case of polio that summer came early in June, right after Memorial Day, in a poor Italian neighborhood crosstown from where we lived.” Throughout the first part, Bucky is always referred to as “Mr. Cantor,” as his actions — and thoughts — are related by the uncannily omniscient storyteller. Bucky is, as his all-American nickname implies, “a sturdy young man you could rely on,” a bulwark of sanity who labors manfully to calm the kids and their panicky, blame-dispensing parents as the polio epidemic spreads through the city, apparently afflicting the Jews in particular. “The Plague” by Albert Camus, also set during World War II, comes ominously to mind.

Bucky’s mother had died in childbirth, and his absentee father was a crook. He was raised by his hard-working grandparents, owners of a small grocery. His sweet girlfriend, Marcia, hails from a tonier part of town — again an echo of “Goodbye, Columbus,” but minus the trademark Roth satire: Her father, Dr. Steinberg, is a kind, wise and cultivated physician, far removed from the “strong, ungrammatical” Mr. Patimkin, the sink mogul. Marcia is safely away from Newark during this dreadful summer, working as a counselor at Camp Indian Hill. She urges Bucky to take the waterfront job, but he resists: How can he leave his boys?

The temptation grows; more children die as the plague continues; greater disasters surely lie ahead. Bucky hears the Kaddish at the funeral of one of his boys, and is livid: “How could there be forgiveness, let alone hallelujahs, in the face of such lunatic cruelty? It would have seemed far less of an affront to Mr. Cantor for the group gathered in mourning to declare themselves the celebrants of solar majesty, the children of an ever-constant solar deity, and, in the fervent way of our hemisphere’s ancient heathen civilization, to abandon themselves in a ritual sun dance around the dead boy’s grave….” Better to worship the sun’s “immanent power to incinerate the earth,” he thinks, “than to swallow the official lie that God is good and truckle before a cold-blooded murderer of children.” With great ambivalence, Bucky decides to go to camp. The reader cannot fail to imagine other camps, across the Atlantic, in the summer of 1944.

We have been here before with Roth and God — most recently in “Indignation,” where the doomed, cocky student protagonist flaunts his atheism to the dean of “Winesburg College” — but in “Nemesis,” Roth directly confronts the theological problem of evil. When Bucky arrives at Indian Hill, he and Becky paddle a canoe to an island in the lake (a whisper of Theodore Dreiser’s “American Tragedy”), make love (off-camera) and immediately argue: “‘God didn’t create polio,’ she said. ‘You think not?‘ ‘Yes,” she said sharply, ‘I think not.’ ‘But didn’t God create everything?’ ‘That’s not the same thing.’ ‘Why isn’t it?’” Bucky’s guilt grows, as he teaches kids to frog-kick while his friends are fighting the Good War. “Why does [God] set one person down in Nazi-occupied Europe with a rifle in his hands and the other in the Indian Hill dining lodge in front of a plate of macaroni and cheese?”

“Nemesis” is Roth’s 31st book. Readers versed in his oeuvre will be astonished by the absence of sex, save one fleeting glimpse of Marcia’s nipples. (No Danish fashion models, elusive lesbians or randy co-eds, as in the other late novels.) Nor has “Nemesis” a steady supply of humor. The bit closest to comedy is Indian Night at camp, when the boys gather in costume at the Council Ring for a campfire ceremony, their faces darkened with cocoa powder. The feathered camp director enters with war club and peace pipe, and delivers a speech about “the ancient sacred fire of wood” and “the chords of primitive remembrance.” The whole business is rendered with deadpan restraint — this is, after all, the ironic fulfillment of Bucky’s preference for pagan rite over Jewish pieties — until the first, liberating belly laugh, when “a figure wearing the mask of a big-beaked bird” approaches the fire and solemnly addresses the campers: “‘Meetah Kola nayhoon-po omnicheeyay neechopi.’ ‘It’s our medicine man,’ whispered Donald. ‘It’s Barry Feinberg.’”

From here on, things fall apart. More people come down with polio; some die. Among the survivors is Mr. Cantor, whom the narrator — revealed in the last act as Arnie Mesnikoff from the old playground — has run into and befriended in 1971. Mesnikoff, an architect with a wife and kids, contracted polio that summer of ’44 and has worn leg braces ever since. And myopic Bucky, living alone at age 50, has never ceased blaming himself for what happened. “He has to convert tragedy into guilt,” the narrator observes. “He looks for a deeper cause, this martyr, this maniac of the why, and finds the why either in God or in himself or, mystically, mysteriously, in their dreadful joining together as the sole destroyer. This is “nothing more than stupid hubris… the hubris of fantastical, childish religious interpretation.” This “profoundly decent man,” Mesnikoff concludes, “was largely a humorless person… who never in his life had spoken satirically or with irony, who rarely cracked a joke or spoke in jest… and for that he had paid a high price….”

Roth risks a similar price as expectant readers turn the pages of his serious, plainspoken story. He offers a measure of grace in the book’s final image, of Mr. Cantor in his physical prime, showing the boys how to throw a javelin — emblem of maleness, fusion of Greek and Native American cultures — but Bucky’s lack of irony remains his Achilles’ heel. Without irony, how can a man steel himself against the Fates? Without irony, the gods will drive you mad. The heroic gym teacher is also a half-blind solipsist who can’t see much beyond himself, who doesn’t get the cosmic joke as his swan-diving body crashes into real life. The rest of us, thanks to the masterful artistry of Philip Roth, get it all too well.

Stuart Schoffman, a journalist and translator, is a fellow at the Shalom Hartman Institute in Jerusalem.