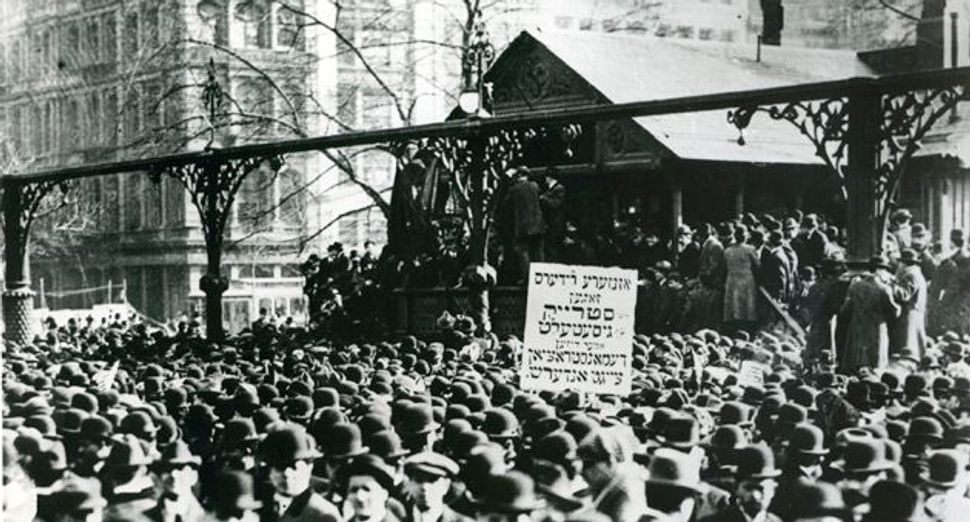 Still Troubled: The sign held by these 1910 demonstrators in Union Square reads ?Our leaders say the strike is over, this demon- stration shows otherwise.? Image by Forward Association

Amid the press of our hectic, activity-filled daily lives, important milestones often go unnoticed. September 2, 2010, was one of those occasions. Its existence barely registered in my household or, I suspect, in yours. But it should have, for 100 years ago, on or about September 2, the conditions of modern life changed markedly — and for the better. On that day, the so-called “Protocols of Peace” came into being, fundamentally shaping how hundreds of thousands of Americans, most of them Jewish immigrants, came to terms with America. Putting labor unions on a safe and secure footing, the “Protocols of Peace,” an agreement between management and labor or, more precisely, between predominantly Jewish garment manufacturers and predominantly Jewish garment workers, brought stability to an industry whose volatility and bitter internecine strife had long been a matter of record. I don’t think I’m guilty of exaggeration when I say that without the “Protocols of Peace,” American Jewry as we know it might not have come into being.

The Protocols saw the light of day against the dark backdrop of one of the nation’s most prolonged and ugly labor disputes. It began in July 1910, when anywhere from 60,000 to 70,000 coat makers — “cloakmakers,” in the nomenclature of the time — walked off their jobs. “We saw a sea of people surging out of the side streets toward Fifth Avenue,” recalled Abraham Rosenberg, then president of the International Ladies Garment Workers Union. “In my mind, I could only picture to myself such a scene taking place when the Jews were led out of Egypt.”

Rosenberg’s biblically inspired exuberance, sure to strike just the right note with his largely Jewish constituents, soon soured as the strike dragged on throughout a long, hot summer, with no end in sight. Though management and labor, abetted by the adroit negotiating skills of two honest brokers, Louis Brandeis and Jacob Schiff, periodically sat at the same table, little came of their exchanges. Neither side would budge. Labor, for its part, insisted on a union shop, only to be rebuffed out of hand by the manufacturers, who persisted in characterizing labor unions as both a “nuisance” and a “plague.”

As talks between the two parties stalled, tempers flared and fists flew: Strikebreakers and strikers alike routinely attacked one another verbally and physically, prompting one eyewitness to suggest that the “cloak strike” had generated its very own Frankenstein. In one incident, which was widely reported by the mainstream press, a “raging, yelling mob” even laid siege to the offices of Die Wahrheit, one of the Forward’s chief competitors, smashing windows, hurling stones and wreaking havoc in protest against what it took to be that newspaper’s conciliatory tone toward management. Die Wahrheit, in turn, accused the Forward of needlessly — and recklessly — stirring the waters of discontent.

With things at a boil, the grandees of the Jewish community stepped in, determined to lower the temperature once and for all. Enlisting the legal talents of Louis Marshall, one of its most celebrated sons, they made sure that labor and management hammered out an acceptable agreement, one that ratified a 50-hour workweek, the principle of collective bargaining and the establishment of a “preferential shop,” in which the hiring of unionized workers was to be given priority over the hiring of nonunionized ones.

Although the Forward denounced the latter provision as a “scab shop with honey,” most garment center employees, their energies and their pocketbooks sapped, welcomed an end to the strike. Upon hearing the September 2 news that both sides had endorsed the “Protocols of Peace,” these employees took to the streets in celebration. “Everywhere men and women, old and young, embraced and congratulated one another on the victory,” the press reported with considerable relief. Although the manufacturers did not take to the streets, preferring to celebrate in a more private and sedate fashion, they, too, claimed victory.

Interesting on its own terms, the history of the cloakmakers’ strike and, with it, the creation of the “Protocols of Peace,” also remind us of a time when the Jewish community was a house divided, a time when tensions, born of class differences, threatened to make a mockery of the cherished notion of klal yisroel. That these divisions are now a thing of the past is surely reason enough to mark September 2 on our calendars so that come next year, this day will take its rightful place alongside other major moments in our history.