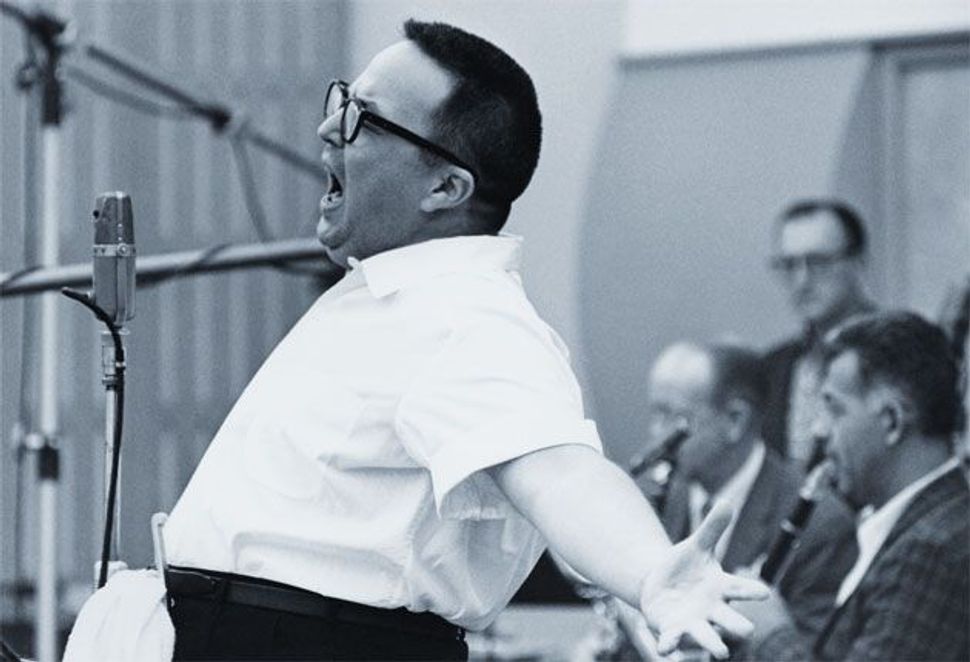 Belting It Out: Allan Sherman singing at a session for ?My Son, the Folk Singer? or My Son, the Celebrity? in fall or winter 1962. Image by courtesy of robert sherman

From this you make a living?

No undertaking deserved that Jewish punch line more than turning the French folksong “Frère Jacques” into a parody called “Sarah Jackman.” But Allan Sherman showed how that could be done.

The 1960s are not remembered as a time when fat men in crew cuts made hit records, but in that decade’s opening years, the overweight and close-cropped Sherman enjoyed a run worthy of a teen idol. From “Sarah Jackman” in October 1962 to his “Hello Muddah, Hello Faddah” mega-hit of August 1963 (the spelling was changed to “Fadduh” for the 1964 follow-up song and for a musical), Sherman recorded three albums that sold millions and made him a national sensation. “My Son, the Folk Singer,” “My Son, the Celebrity” and “My Son, the Nut” all went gold, and “Hello Muddah” won a Grammy. For a year, Sherman was a superstar.

That fame is curious enough, but it gets curiouser. After almost 50 years, Sherman’s popularity is still intact. Collector’s Choice Music has just reissued all eight of the albums Sherman recorded for Warner Bros. Records between 1962 and 1967. It is the latest example of an established trend. The same records were included in the 2005 Rhino Records boxed set, “My Son, The Box,” and before that there were six greatest-hits albums and the off-Broadway musical “Hello Muddah, Hello Fadduh!”

Nothing curious about Sherman’s evergreen appeal, you say? Shrewd marketers always know how to make a buck off the stodgy folk who still like him? Such hip dismissal, once common, is losing steam. Too many people have lately pledged allegiance to the Sherman camp, and they’re too smart for condescension. New York Times theater critic Neil Genzlinger praised the “sneak-attack brilliance” of Sherman’s best wordplay. (Genzlinger doffed his hat to “The Ballad of Harry Lewis,” Sherman’s parody of the “The Battle Hymn of the Republic,” and its killer pun, “Where the drapes of Roth are stored.”) “Freakonomics” co-author Stephen J. Dubner applauded the “certified genius Allan Sherman.” And as recently as September, Ben Sisario, whose cool credentials include teaching “Rock Music in Historical Context” at New York University, wrote in the Times that in the wake of the AMC hit series “Mad Men,” Sherman’s songs are revealed to be more than “lighthearted crowd pleasers.” They are also “glimpses into a culture of rat-race conformity.”

Sisario could have stopped at “glimpses into a culture.” The title of Sherman’s first album, “My Son, the Folk Singer,” got it right. Like the 1960s pop artists who made still lifes out of Campbell’s soup cans, Sherman, who died in 1973, created folk songs populated by the comically mundane characters of contemporary American life. He dumped the folk repertoire’s traditional cast of heroes, workers and lovers, and replaced them with television addicts (“Al ’N’ Yetta”), harried suburbanites (“Here’s to the Crabgrass”), cheerfully conventional ad men (“When I Was A Lad”), computer fans and phobes (“Automation”), feuding business partners (“The Streets of Miami”), the obese (“Hail to Thee, Fat Person”) and assimilating ethnics (“Harvey and Sheila”). Long before the current housing crisis, he spotted our infatuation with home ownership. His parody of “Kingston Town,” the Caribbean hit about a heartbroken lover, captures what makes the American heart ache. “I’m upside down/My head is turning around/Because I gotta sell the house in Levittown.”

On his 1962 “Folk Singer” album, Sherman was at his most overtly Jewish. He used Yiddish-accented English and New York-ese to sing of the garment center, Miami Beach, Brooklyn Jews hollering out the windows of Ocean Parkway apartments and a passion for off-price merchandise (“Grab those bargains off those racks/Who needs Bergdorf, who needs Saks”). This kind of Jewish material hadn’t crossed over before, and trade publications Variety and Billboard predicted that Sherman’s popularity would be limited to the New York-Los Angeles-Miami orbit. But Sherman’s string of gold records was made possible by non-Jewish buyers and proved that the American Jewish experience could serve as an exemplar of national trends. After he became famous, Sherman told Newsweek that if “Folk Singer” had grown out of Chinese or Italian roots, it would have been just as big a hit. Newsweek didn’t buy it. “He should live so long,” it editorialized.

Nobody today needs Sherman to provide a dose of Jewish ethnic flavor, and if that were all he offered, his recordings would be forgotten, not continually reissued. But in our multicultural world, Sherman’s Jewish flavor takes a backseat to his comic journalism. Like “Mad Men,” Sherman’s songs about suburbs, status, television and children record the moment when Americans first suffered the pains of their new affluence. The latter brought blessings, but also isolation, anxiety and boredom. Advertising’s job was to convince us that everything was fine. Sherman’s job was to make us laugh at what wasn’t fine. He can still do it.

Mark Cohen is researching a biography of Allan Sherman. He is the editor of “Missing a Beat: The Rants and Regrets of Seymour Krim” (Syracuse University Press, 2010).