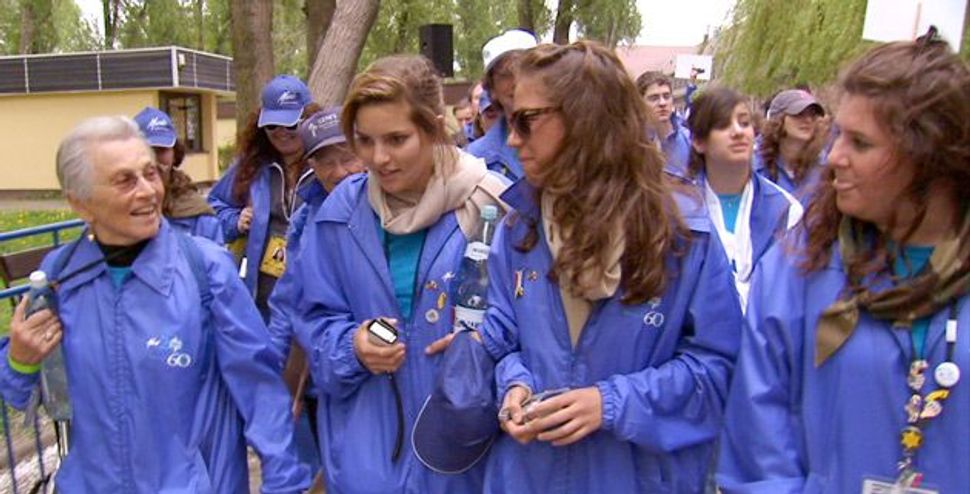 Side by Side: Young American Jews and survivors journey together to Holocaust sites and then on to Israel. Image by COURTESY MARCH OF THE LIVING

Some years ago, on an overcast spring morning, I visited Majdanek, the Nazi concentration camp near Lublin, Poland. I recall many disturbing sights from that day — the gas chamber, the barracks, the monumental concrete bowl containing tons of human ash. But one unnerving sight was more about the living: the teenagers who had wrapped themselves in Israeli flags.

Did these young people not know that 20,000 non-Jews were murdered at Majdanek? And could they not imagine that some of the 60,000 murdered Jews might have felt a connection to their home countries — to Czechoslovakia, to France, even to Poland? Had no one told them that some prewar Jews, for political or religious reasons, were in fact against Zionism?

I should emphasize that I was not, am not, against Zionism. What disturbed me was the assumption suggested by this flag in this place: that the only viable response to the Holocaust is Israel. In short, I was shocked, and then infuriated, by the appropriation of the dead for the Israeli national myth.

But apparently, the flag wearing is common. Later I learned that I had bumped into the March of the Living, a tour that brings teenagers and Holocaust survivors to a number of camps in Poland. An actual march is enacted on Holocaust Remembrance Day, as a demonstration of Jewish life, in contrast to the “death march” to Birkenau from Auschwitz. (I thought the death marches were when prisoners were forcibly evacuated as the Soviet Army approached, but never mind.) Then the attendees fly to Israel for Independence Day, thus reinforcing a kind of historical syllogism: In Europe the Jews were weak. In Israel they are strong. Therefore, supporting Israel will prevent another Holocaust.

Considering the subject matter — the historical complexities, the potential for heated criticism and fervent support — a documentary about the march is an excellent idea. But Jessica Sanders’s “March of the Living” is more of a love letter to the tour, an uncritical look at what is, in essence, a means of indoctrination.

The film follows the 2008 March of the Living, which coincided with the 60th anniversary of Israel. A further impetus is that the students are accompanied by “the last generation of Holocaust survivors.” The documentary follows Jewish students and survivors from Los Angeles, as well as Jewish youth from Sao Paolo, and a few German students.

Right from the beginning, it is suggested that the Diaspora is a dangerous place for Jews. (I won’t mention the characters’ names, as I would prefer not to appropriate them for another agenda, even my own.) A girl from Los Angeles explains how a schoolmate proclaimed her hatred for Jews; another girl from Sao Paolo recounts that once a neo-Nazi followed her friend home. It is painful to listen to such stories. Nevertheless, they do not exactly constitute a Kristallnacht.

The survivors are presented as active and charming, paragons of advanced age. Their motivation for joining the tour is less about Israel, it seems, than it is about sharing their experiences. Regardless, their presence lends gravitas to the film, even though it is discomfiting to be told repeatedly that they are the “last generation,” as if to remind these energetic survivors that though they’d cheated death once, time is short.

“March of the Living” is not completely contrived. I was impressed by the thoughtfulness of the German students, who have their own complicated legacy. And I felt the tears coming as the girl from Sao Paolo found her great-grandfather’s name at the Lodz Ghetto memorial. The tears arrived when, at Treblinka, a survivor stood before the memorial stone for her hometown and cried: “They denied me my family. They denied them their life.”

Such scenes are the exception. More often we see the young travelers on the buses and in the camps, where they seem appropriately reflective and sad. These scenes are intercut with snippets from interviews, where the participants seem appropriately reflective about the Holocaust and enthusiastic about Israel. The lasting impression is that the young people are not so much individuals as they are vehicles for the message.

Too much of this documentary reflects received opinion. There is more than one shot of a Pole watching from his window, an echo of the stereotype that Poles were, at best, passive participants in the Holocaust. When the students visit a Polish high school, one asks in a voice-over, “These people’s grandparents — what did they know?” Well, they probably knew everything. And maybe, just maybe, they saved a Jew or two.

Given these preconceptions and the grinding intensity of visiting several camps, it’s no wonder that the students are delighted to arrive in Israel. How nice for them, then, that they get to celebrate Israel Independence Day in Jerusalem. And how convenient for the organization to reinforce the Messianic narrative of the Holocaust and Israel.

Which was exactly what I wanted to tell the young Americans whom I saw that day in Majdanek. But I restrained myself. Unlike the March of the Living, I didn’t feel the need to make a political statement in a graveyard.