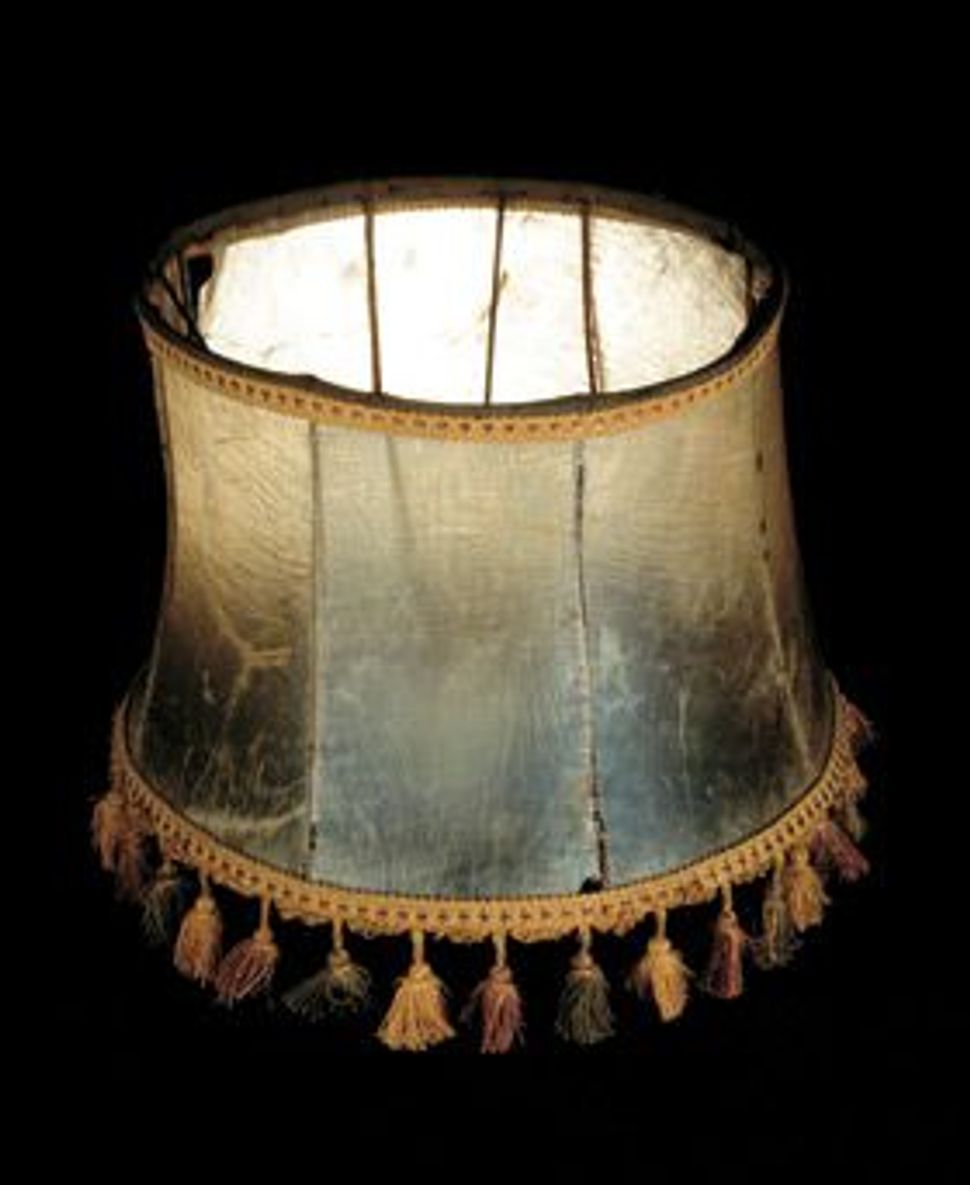 Macabre Object: The panels are human skin, but it?s unknown whose. Image by JAMES HAMILTON

In this podcast, Jon Kalish speaks with Mark Jacobson, author of ‘The Lampshade.’:

Why are people so reluctant to publish a photograph of Mark Jacobson’s lampshade? Because the lampshade is almost certainly made of human skin. 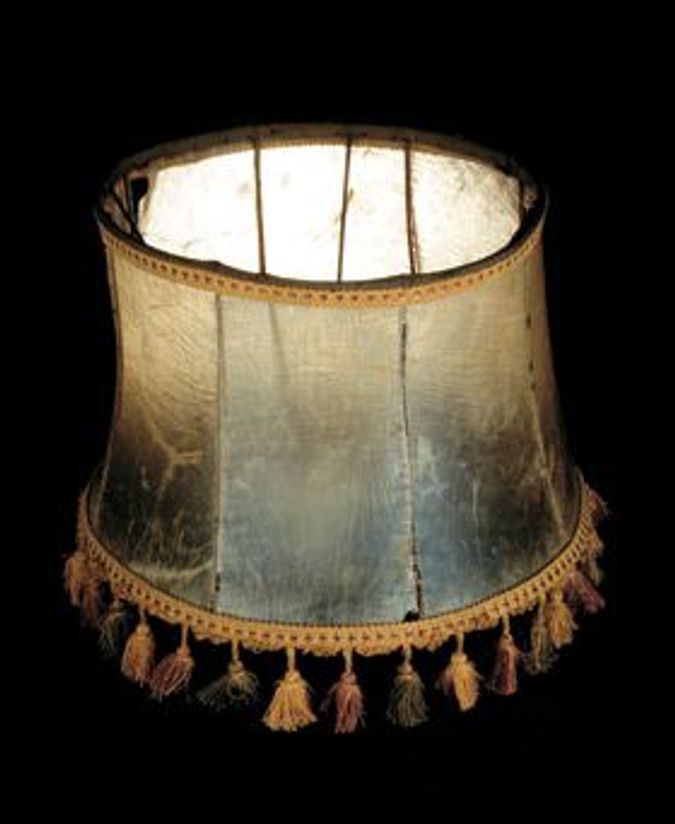 Macabre Object: The panels are human skin, but it?s unknown whose. Image by JAMES HAMILTON

The magazine for which Jacobson is a staff writer, New York, put his story about the lampshade on the cover of its September 13 issue, but opted to run quotes on the cover and no photo. Inside, the magazine ran a picture that was heavily blurred.

And Simon & Schuster, which just published a “Holocaust detective story” by Jacobson, titled “The Lampshade,” put a color photograph on the hardcover but partially obscured it with a translucent paper jacket. Both the publisher and Barnes & Noble deny a report that the giant retailer deemed the photo too provocative to appear with an unfettered view. So now the image of the lampshade looms in the background, creating an air of mystery.

The notion that Nazis made lampshades from the skin of Jews has been widely regarded as a myth. Jacobson’s book, which chronicles his three-year investigation into the origins of a lampshade that scientific testing has almost certainly determined to be made of human skin, sheds new light on an incendiary topic: Holocaust scholars deem it “pornographic”; Holocaust deniers cite it as grist for their arguments, and religious Jews insist that it, along with all human remains, should be buried.

Jacobson met with all the aforementioned parties. He traveled to Germany four times and met with a high-level delegation of Yad Vashem executives. He was berated by a former official of the United States Holocaust Memorial Museum for approaching the institution to see if it was interested in the object; he chased down a rumor that a leading scholar tried to buy a human lampshade to get it off the market, and he found an American veteran from the liberation of Buchenwald who says he saw a lampshade at the concentration camp. Jacobson did all this because his pal, Raymond ‘Skip’ Henderson, bought the lampshade from a junkie in New Orleans. And not just any junkie, but one who did time for stealing cemetery ornaments. As Jacobson put it in an interview with the Forward, “Gevalt!”

“From a writing point of view, the most difficult thing about doing this book was the tone you were supposed to hit,” Jacobson said. “Here is this incredibly sad thing, yet a lot of the events that occur around it involved these nutty people. You couldn’t make this stuff up, because it was too crazy. So, that made it a very Jewish thing to me.”

There are some compelling facts that cause you to wonder if Jacobson indeed has come into possession of a lampshade made from Jewish skin. Genetic testing by the Bode Technology Group, a major DNA laboratory in Virginia, determined with a large degree of certainty that the skin on the lampshade is human. (Jacobson spent $6,000 of his own money on the tests.) According to assessments made by Sotheby’s and a prominent antique lamp collector in Manhattan, based on the place where the bulb is attached to the lampshade, the lampshade was clearly made in Europe. And the friend of Jacobson’s who bought the lampshade at a rummage sale in New Orleans after Hurricane Katrina pointed out that the soldering used for the metal in the lampshade’s frame has the same bluish hue and oily sheen as the solder used on guitars manufactured in Germany.

The history that Jacobson unearths does make a case for a reassessment of the lampshade story. In a United Press International account of Buchenwald, correspondent Ann Stringer says she saw a lampshade, as well as book bindings, made from human skin. Stringer interviewed a Dutch prisoner who told her that Ilse Koch, the infamous wife of the camp’s commandant, ordered the execution of prisoners who had tattoos other than the numbers forcibly given to them. The skin with the tattoo was then made into “ornaments,” according to the UPI dispatch. There was also testimony during the Nuremberg Trials from a Czech surgeon who claimed he was forced by the Nazis to remove skin from the backs and chests of dead prisoners at Dachau concentration camp. The doctor testified that this skin was used to make riding breeches, gloves, slippers and handbags.

Jacobson also cites newspaper accounts of American veterans who brought home pieces of human skin after World War II. One is Lorenz Schmuhl, who served as the commanding officer of Buchenwald after it was liberated.

Perhaps the most chilling account in the book comes from Albert Rosenberg, a German Jew who was nearly beaten to death in the 1930s and lost 28 relatives in the Holocaust. Rosenberg immigrated to the United States and served in the American military’s Psychological Warfare Division during the war. He is now 91 and living in El Paso, Texas. Rosenberg told Jacobson that in the days just after Buchenwald was liberated, he was informed that a lamp at the desk at which he was working had a lampshade made from human skin. And he spoke of wallets and gloves made from human skin, describing the concentration camp’s pathology lab as “a veritable factory of human skin products.”

The United States Holocaust Memorial Museum makes no mention of lampshades being made from human skin. When Jacobson contacted Diane Saltzman, former head of collections at the museum, she told him that the museum would never display the lampshade. Saltzman also declared that it had no educational value whatsoever.

Holocaust scholar Michael Berenbaum was also interviewed for the book. Berenbaum served as project director for the creation of the museum and was heavily involved in the acquisition of objects. He confirmed that close to 20 years ago, a lampshade purported to be made from human skin became available for purchase and was brought to the museum’s attention.

Berenbaum says that displaying objects such as a lampshade runs the risk of being pornographic.

“It’s not necessary to exhibit it,” Berenbaum told the Forward. “There’s ample documentation about how evil the Nazis were. Not displaying it would respect the people who were victimized.”

An ordained rabbi, Berenbaum believes there is a halachic basis for not burying Jacobson’s lampshade. He cites the possible historical value of the object in rebutting those who deny that the Nazis used human skin in such a manner.

Jacobson has thought seriously about burying the lampshade. He found an Orthodox rabbi in New Orleans who was receptive to the idea. But he realizes that at this point, there’s no proof that the skin on the lampshade came from a Jew. While researching this macabre subject, Jacobson learned that a Wisconsin murderer and body snatcher named Ed Gein made lampshades and chairs out of human skin. Jacobson asked, “Who’s to say that the lampshade that was found in New Orleans is not of a similar origin?”

Jacobson’s hope is that scientific advances might shed more light on the ethnic makeup of the skin on his lampshade, and that someone who sees the book will offer to pay for more testing.

“I’m perfectly willing to bury it at some point, but not until I find out more about it,” he said. “The day it’s no longer in my possession is okay with me.”