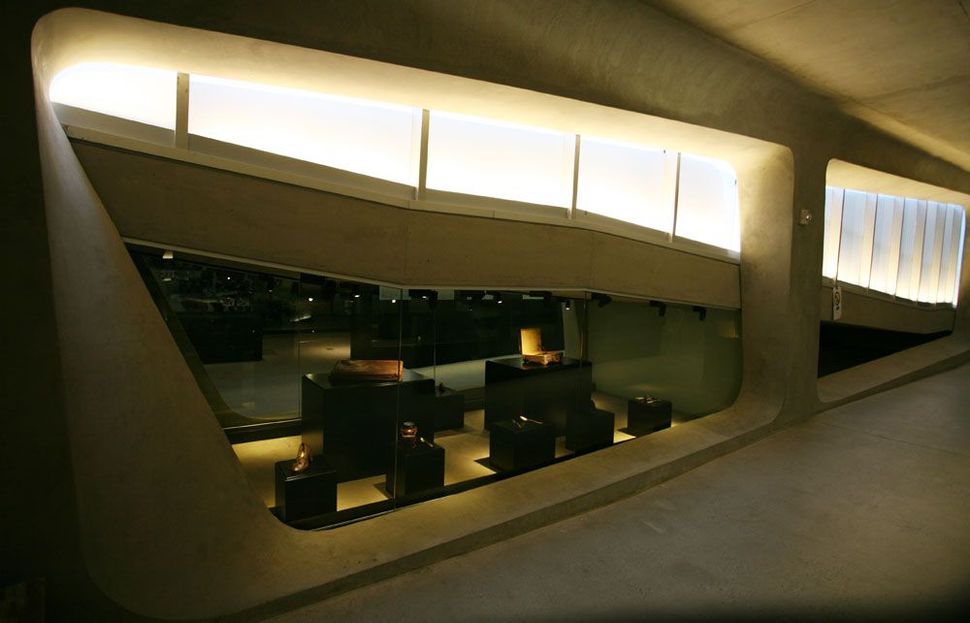 Inside the Museum: Here we see the the Auschwitz exhibit, below the ramp. [Click for larger view] Image by COURTESY BELZBERG ARCHITECTS

Pan Pacific Park has long been an oasis in Los Angeles’s bustling, heavily Jewish Beverly-Fairfax neighborhood. Basketball courts, baseball diamonds, picnic areas and playgrounds predominate in the park’s hilly setting. It may strike certain visitors as somewhat incongruous, therefore, that the latest addition to the park is an institution that appears to run counter to its carefree spirit: the new Los Angeles Museum of the Holocaust.

Due to be dedicated on October 14, LAMH is notable for several reasons. For one thing, it bills itself as the nation’s oldest Holocaust museum, having been founded by local survivors in 1961. For another, LAMH is paradoxically L.A.’s second Holocaust museum — if not in importance, at least in the sense that it is not the first to have a permanent institutional home.

Although LAMH was established half a century ago, its collection of artifacts for years bounced around various locations in the city’s mid-Wilshire district. Its exhibition has long attracted a respectable number of annual visitors, but its itinerant existence meant that its local profile was relatively low.

This reputation was further reinforced in 1993, with the opening of a competing institution, the Simon Wiesenthal Center’s Museum of Tolerance, which soon became known as L.A.’s main Holocaust museum.

The MOT’s immense success (it draws an annual 350,000 visitors) seemed to obviate a second city institution devoted to documenting the Nazi genocide. But local survivors’ determination to have a museum that reflected their own experiences (many viewed the MOT as an interloper created by an outsider, Rabbi Marvin Hier) led them to persist, and after the turn of the millennium, a successful fundraising campaign gathered the necessary resources to establish LAMH’s new home, in Pan Pacific Park.

Designed by the Los Angeles firm of Belzberg Architects, LAMH is as architecturally striking as it is unique. The most immediately noticeable feature of the 32,000 square-foot building is that it is largely underground. Set in the northwest corner of Pan Pacific Park, next to an existing Holocaust memorial that was erected by local survivors in 1991, the museum is built into a hillside and merges smoothly with its natural surroundings. Its roof is covered with triangular sections of grass that spread into the park’s adjoining green fields. The museum’s organic feel is emphasized further by its streamlined curves, which — visible both inside and out — echo the park’s rolling hills. In short, the museum can be seen as a work of environmental sculpture or landform architecture that blurs the line between building and setting.

In adopting this form, Belzberg Architects has followed the example of other contemporary builders who have produced similar designs, such as Peter Eisenman’s City of Culture of Galicia, in Santiago de Compostela, Spain (under construction since 1999); Enric Miralles’s Scottish Parliament complex, in Edinburgh (1998–2004), and Robert A.M. Stern’s unrealized American Revolution Center at Valley Forge, in Pennsylvania, all of which partly follow and partly merge with the contours of their surrounding landscapes.

It remains somewhat puzzling, however, that a Holocaust museum would take this particular form. In recent years, after all, most Holocaust museums built in the United States have strived for a maximum degree of visibility. As seen in the museums of Houston, Detroit, Chicago and Washington, D.C., Holocaust museums have, more often than not, gained attention by displaying explicit Holocaust-related iconography (barbed wire, smokestacks and so forth) in their exterior forms. The new LAMH is comparatively inconspicuous — a stealth museum that nearly disappears into its natural surroundings.

The museum’s subterranean setting is significant for several reasons. At the most prosaic level, the building’s location reflected practical considerations on the part of the designer. Aware of concerns on the part of the city’s strict parks and recreation department that the museum might adversely affect the park’s atmosphere, Belzberg Architects went out of its way to reassure skeptics that the firm’s intent was “to integrate the building into the park and minimize [its] visual impact.”

That said, it is hard not to conclude that the building’s underground location also has deeper significance. In one sense, the building’s self-effacing character might be seen as reflecting an assimilationist reflex on the part of L.A.’s Jewish community. After all, some of the city’s most important Jewish institutions, such as the Museum of Tolerance and the Skirball Cultural Center (designed by Moshe Safdie in the years 1986 to 1995), have strived not to appear architecturally Jewish in any way, a strategy that echoes their universalistic mission of reaching out to non-Jewish audiences. Firm founder Hagy Belzberg’s recent remark to L.A.’s Jewish Journal, that LAMH deliberately has “no Jewish identification” and that it aims to “attract people already in the park who might not have come there intending to step foot in a Holocaust museum,” suggests that the building indeed may be following in a longer tradition.

Yet, LAMH’S underground location actually has more to do with the meaning of the Holocaust or, more precisely, with the question of how architecture should properly address its legacy. In a 2008 interview, Belzberg firmly declared his opposition to the postmodern tendency of architects to utilize historically symbolic forms such as “barbed wire and bricks” in the design of Holocaust museums. As he put it: “Architecture has nothing to do with the Holocaust. It was the people that had to do with [it].”

Instead, Belzberg embraced a more deconstructivist strategy of avoiding literal representation in favor of subtle allusion. In a 2008 interview, he noted that embedding LAMH into the natural environment of a public park represented a commentary on how the Holocaust transpired in the midst of ordinary German life. Citing Peter Eisenman’s Memorial to the Murdered Jews of Europe, in Berlin, whose location in the heart of the busy metropolis lends itself to such prosaic activities “as picnicking and playing Frisbee,” Belzberg observed that the daily occurrence of these same activities near LAMH would symbolically underscore the chilling fact that during the Holocaust, “people knowingly or unknowingly went on with their lives while extraordinary events were taking place.” Given this claim, the museum’s relative inconspicuousness as architecture does not so much hide as illuminate one of the more disturbing facts of the Holocaust: the coexistence of atrocity and normalcy.

Whether this subtle message will be grasped by park-goers is unclear. It may not register with casual passersby, but visitors who enter the museum and see its exhibit will probably understand it. In a brilliant move, Belzberg guides visitors into the museum by moving them, from their aboveground arrival point, down a long ramp to the museum’s entrance, 13 feet below grade. As they leave the sunlight above, they enter progressively smaller and darker spaces that echo the exhibit’s powerful narrative of worsening anti-Jewish persecution. By the time the exhibit arrives at the war’s end and liberation, the spaces open up again and become lighter. In so doing, the museum drives home Belzberg’s claim that the distance between normalcy and atrocity is indeed small. LAMH’s subtleties may not succeed in drawing in every visitor to Pan Pacific Park, but those who take the short journey to the shadowed past from the sunlit present may well emerge convinced that one city can legitimately be home to two Holocaust museums.

Gavriel Rosenfeld is associate professor of history at Fairfield University. His book, “Building After Auschwitz: Jewish Architecture and Jewish Memory Since the Holocaust,” will appear in the fall of 2011, from Yale University Press.