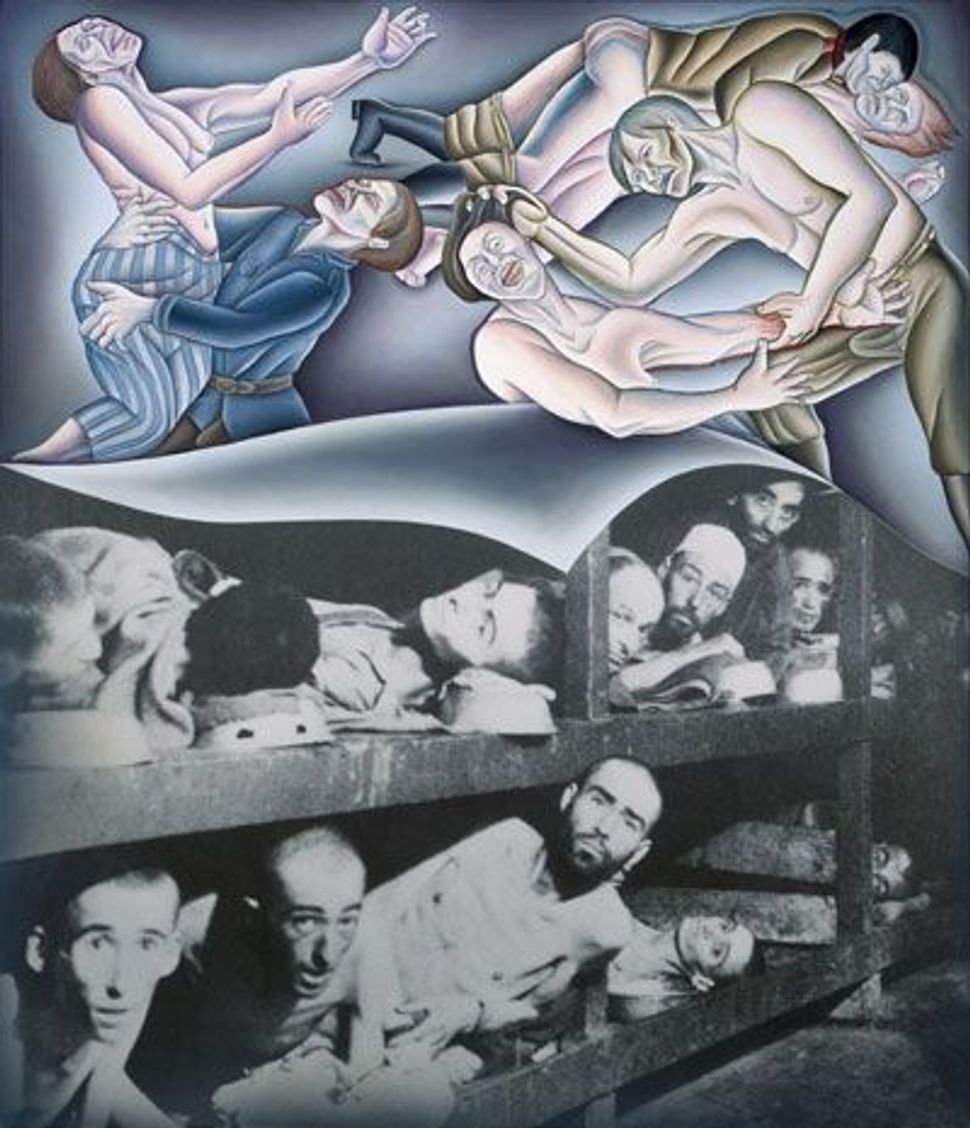 One panel of ?Double Jeopardy? in Chicago?s Holocaust Project, ?Liberation,? represents the rape of women during the Holocaust, using Rubens?s famous ?Rape of the Sabine Women? as a framework. Image by Judy Chicago

While walking through “Shifting the Gaze: Painting and Feminism,” at the Jewish Museum in New York, one artist stood out for her intensity and, this fall, her visibility.

In addition to “Shifting the Gaze,” groundbreaking feminist artist Judy Chicago has works in a one-woman show and in another group show in New York this fall, along with her “Dinner Party,” on permanent display at the Brooklyn Museum’s Elizabeth A. Sackler Center for Feminist Art.

From working on our forthcoming anthology, “Sexual Violence Against Jewish Women During the Holocaust,” we knew that Chicago was prescient not only about feminism, but also about understanding sexual abuse of women during the Holocaust. She incorporated the theme into her work before anyone else did and from the mid-1980s into the early 1990s, in partnership with her husband, photographer Donald Woodman, she included it in the “Holocaust Project: From Darkness into Light.” It has taken until now, however, for a book to appear about the subject. 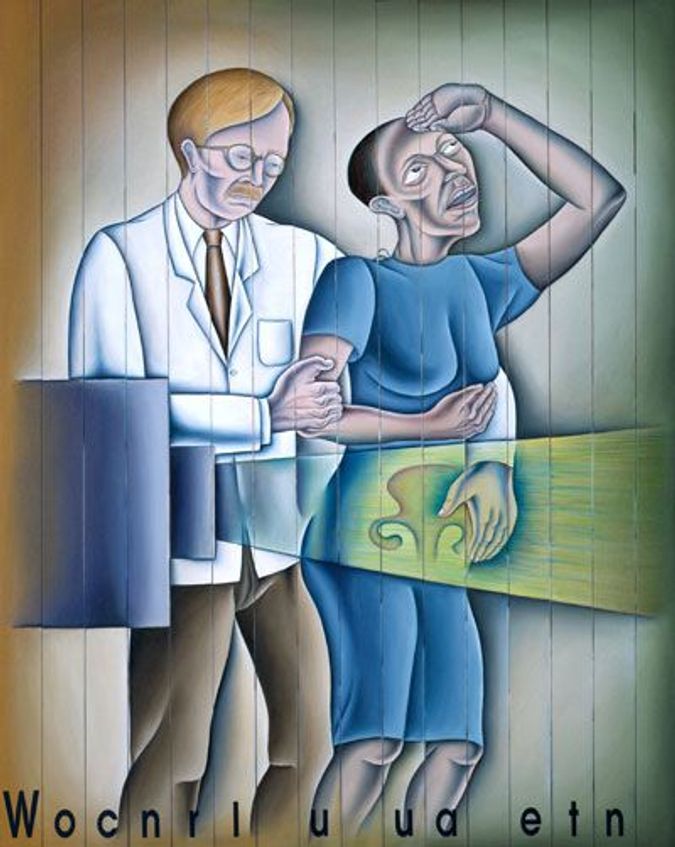 A panel in Chicago?s ?The Four Questions? series (part of her ?Holocaust Project?) depicts sterilization and asks, ?Who Controls Our Human Destiny?? Image by Judy Chicago

Chicago’s first step to the “Holocaust Project” was reading the documentation about sexual abuse coming from the 1983 “Conference on Women Surviving the Holocaust,” organized by Joan Ringelheim and Esther Katz at Stern College in New York. Chicago worked with a group of experts to help her better understand the Holocaust, and traveled with Woodman to Israel as well as extensively to concentration camps in Europe. In the process, she discovered that the early researchers working with Holocaust survivors’ testimonies were so lacking in gender awareness that they had never broached the subject of sexual violence.

One panel of “Double Jeopardy” in Chicago’s Holocaust Project, “Liberation,” represents the rape of women during the Holocaust, using Rubens’s famous “Rape of the Sabine Women” as a framework. The allusion was deliberate: “I positioned my models in those same poses in part to suggest that rape has often been part of war,” Chicago said. “In general [we] had to go outside the ‘official’ Holocaust story to find evidence of women’s experiences.” In this image, as in others that combine photographs with painting, the artist fuses together known and forgotten history. She uses familiar photographs from the Holocaust, in this case a famous image of inmates in a barrack during the liberation of Buchenwald, and superimposes her painting to fill in gaps in received history.

Chicago consulted Holocaust survivors about the accuracy of her images. Originally, she portrayed only Russian soldiers as rapists, because she had found references to this in the literature. She also accepted that the liberating American and British troops never raped women. But, a Holocaust scholar and survivor of Bergen-Belsen who was an adviser to the Holocaust Project told her, “No, Judy, everybody raped.” So she changed the uniforms.

During our conversation with the artist in her New Mexico home, we discussed the difficulty of working on rape and the Holocaust. In the more than 20 years since she began research for her Holocaust Project, Chicago had scrutinized her feelings. She told us: “I think you have to be raped to understand exactly how a rape victim feels, but you don’t have to be raped to be able to comprehend being punished, hurt, and degraded through your gender. Particularly since almost all women have had some comparable experience. They’ve been used sexually, had their pleasure disregarded. It’s not like there’s not a spectrum of experiences of which rape is an extreme… there’s empathy and there’s understanding.”

In 1993, the first exhibition of “Holocaust Project: From Darkness Into Light” was mounted at the Spertus Museum in Chicago. The artist wrote in the accompanying book, “I was curious about the sexual abuse of women, but there was only one reference to it… One woman did refer to the Nazis regularly raiding the barracks of the concentration camp, raping the most beautiful women, and then shooting them. But until I began asking some of my survivor friends about this, I rarely heard a survivor talk about herself being sexually abused. I believe this omission reflects a consistent male bias in the way the Holocaust had been approached and presented.”

This bias effectively blocked the inclusion of women’s sexual violation in serious scholarly discourse on the Holocaust for many years. Chicago’s work threatened the established discourse and met with attacks from some Holocaust scholars. Although it is no longer the case, discussions about sexual abuse remained taboo for many years. 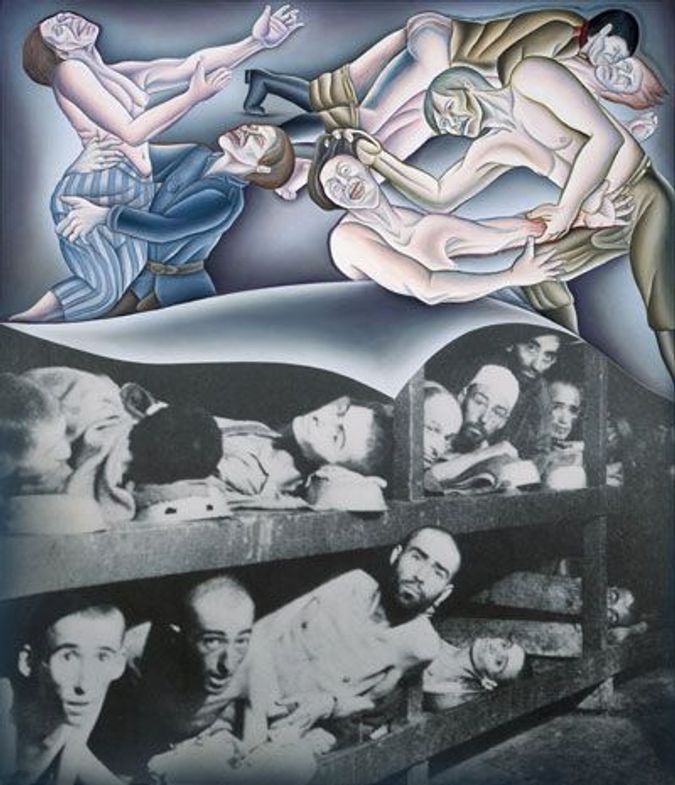 One panel of ?Double Jeopardy? in Chicago?s Holocaust Project, ?Liberation,? represents the rape of women during the Holocaust, using Rubens?s famous ?Rape of the Sabine Women? as a framework. Image by Judy Chicago

Chicago’s pioneering art about the sexual abuse of women is not only evocative of the brutality and violence that many women had to endure with their own bodies, but also represents the horrific experiences that may have been ignored or forgotten. When Chicago worked on the “Liberation” panel from “Double Jeopardy,” she challenged her own emotional limits to properly convey the horror of rape in the camps. “I used my personal fear of rape in the last image; it was very hard to be in there with those feelings,” she stated in her book. As the introduction to our anthology notes, this personal fear of rape is understood and shared by many women across the world, not only by victims in wartime, but also by women crossing dark parking lots in peacetime.

Forced sterilizations and abortions, as well as violent “medical” experiments, were part of the Nazis’ sexual violation of women. In Nazi Germany, forced sterilization was at first part of the eugenics movement or so-called “racial hygiene,” to prevent the birth of babies that were potentially disabled or otherwise unworthy of the Aryan master race. Jewish births obviously fell into this category. In concentration camps, sterilization was incorporated into so-called medical experiments and used as an instrument of annihilation. Those who were “not worthy of life” were, along with their progeny, to be destroyed and forgotten.

A panel in Chicago’s “The Four Questions” series (part of her “Holocaust Project”) depicts sterilization and asks, “Who Controls Our Human Destiny?” In this piece, the artist refers to Hitler’s sterilization program of “racially impure” women, linking it to questions surrounding motherhood. In another panel, “Lesbian Triangle,” Chicago addresses a different form of sexual violation: a female Nazi guard offering bread to starving women in exchange for sex.

While editing our anthology and working with 16 chapter authors from a variety of nations and academic disciplines, it was difficult to grapple with the subject of sexual violation of women during the Holocaust. It is never easy to deal with taboo sexual subjects, but as Chicago herself asked rhetorically: “How open can you be when it’s shrouded in shame?”

Rochelle G. Saidel, a political scientist, is director of Remember the Women Institute in New York City and author of “The Jewish Women of Ravensbrück Concentration Camp.”

Sonja M. Hedgepeth is a professor in the department of foreign languages and literatures at Middle Tennessee State University, teaching German, the Holocaust, women’s issues and world literature.

The two women are co-editors of the forthcoming “Sexual Violence Against Jewish Women During the Holocaust” (Brandeis University Press/University Press of New England, Fall 2010).