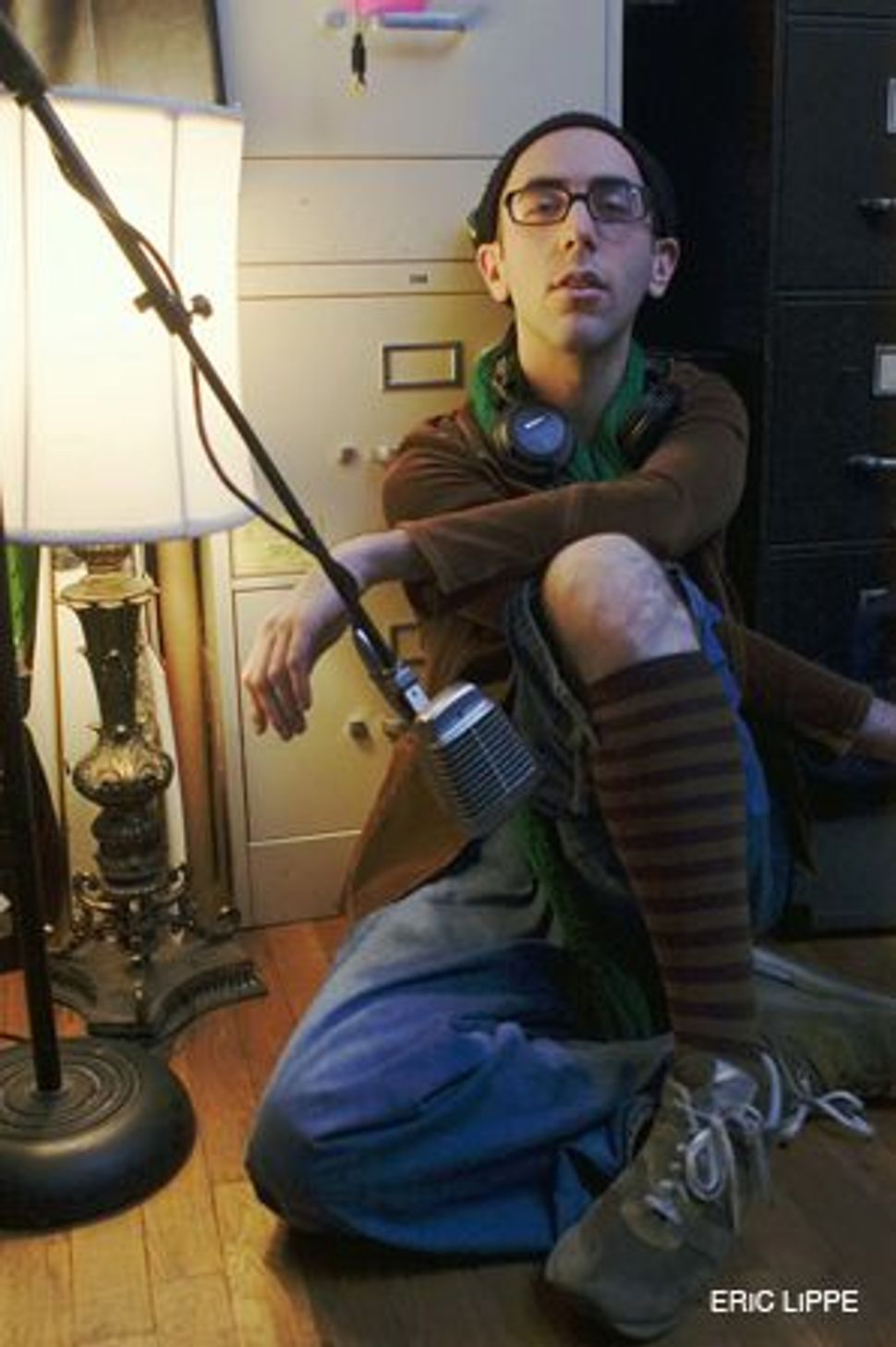 FISHBACK: ?The Last Chanukah is a meditation on being Jewish, gay and an activist ?? three things that, for this 27-year-old performance artist, are intimately related.

Dan Fishback — a 27-year-old performance artist, musician, and recent winner of a significant grant — isn’t surprised when Jews reject him. After all, he is unabashedly gay, resolutely Jewish, strongly critical of Israeli policies and firmly against the Iraq War. His work presses a lot of buttons. 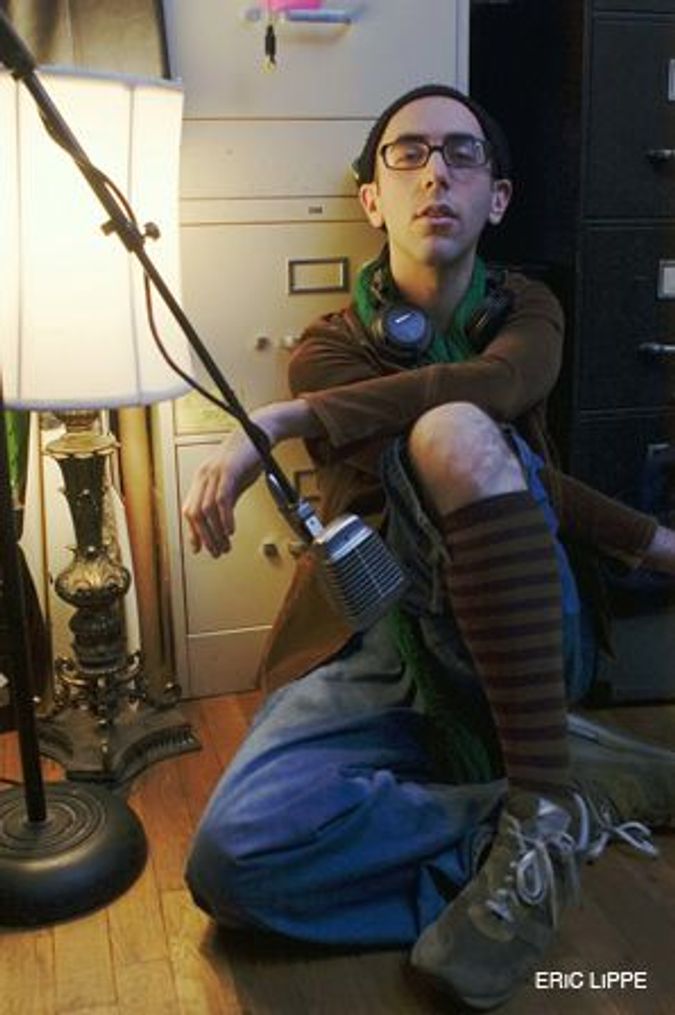 FISHBACK: ?The Last Chanukah is a meditation on being Jewish, gay and an activist ?? three things that, for this 27-year-old performance artist, are intimately related.

He is also not surprised when he’s accepted, because he comes from a long line of Jewish dissent. His great-grandfather, the scion of a family of rabbis, was sent to Siberia for revolutionary activity, escaped to New York and became chief compositor at the Forverts. Fishback’s grandmother remains an activist at 90. His father worked in the civil rights movement, and since Dan and his brother came out of the closet more than a decade ago, his parents have been vocal defenders of gay causes.

Last year, the Six Points Fellowship (a pilot project funded by UJA-Federation of New York and spearheaded by the Six Points Foundation and JDub Records) gave him a hefty two-year grant to work on a play called “The Last Chanukah.” As it was originally conceived, “The Last Chanukah” was going to be a six-character play that explored — as the Six Points Web site explains — “the relationship between citizen and empire in modern America and Maccabean-era Judea.”

It is now a three-person “playless reading,” or what used to be called (aptly, but somewhat comically in this case) a “closet drama,” a work meant to be read but not fully staged. As it was presented March 26 at the Center for Jewish History, “The Last Chanukah” consists mostly of a monologue spoken by one Ian Fleishman, a young, gay Jewish man. The walls of his room are literally and oppressively plastered with papers that document his life. Yes, the play is about Fleishman’s opposition to the Iraq War, and yes, it is about his love life, but despite its title, Hanukkah is barely mentioned at all.

The “playless reading” is, not surprisingly, a meditation on being Jewish, gay and an activist. For Fishback, the three are intimately related. In a telephone interview, he told the Forward that he believes that Jews are constitutionally dissatisfied with the world as it is and therefore constantly demand change. As a Jew, Fishback said, he was always conscious of being different, even in the relatively congenial atmosphere of the Washington, D.C., suburbs. Because of this feeling, it was easier for him to accept that he was gay. And, he added, there is a good reason that gay people and Jews both flock to art. In response to a world that is often hostile, both groups actively cultivate their imagination — even if the imagination turns out in reality to be a form of “low-grade insanity.”

Ian Fleishman is a little insane, to be sure, and quite funny. “The Last Chanukah” has some snappy lines. (“No one’s smart enough to be a Jew. Not even Jews are smart enough to be Jews.”) Nevertheless, while he is something of a schlemiel, Fleishman is not particularly laughable. In this way, “The Last Chanukah” is not like other Jewish comedies that feature self-obsessed anti-heroes. On the one hand, it is formally very self-conscious. On the other, it is supremely uncomfortable with self-consciousnesses — especially Jewish self-consciousnesses. Fleishman yearns to get beyond the heaps of paper that decorate his room. He does not want to be (or remain) “abstract,” even worrying that his anti-war activism is too theoretical, too far from the bombs and bullets that he protests. So it makes a good deal of sense (perhaps too much sense) that he begins to burn his papers, however selectively. Does this constitute a kind of latter-day vitalism (“Stop reading! Just go out and live!”) or merely a dream of escape? The play does not commit itself.

His father has accused Fishback of being too provocative because he is too explicit. Perhaps, but “The Last Chanukah” is less explicit than Fishback’s other theater pieces. It is also less polemic than it may first appear. Fishback claims that his performance work is a form of activism. If so, it is a particularly gentle form of agitation. By his own account, Fishback aims to reveal the everyday, even banal, humanity behind the alien and the threatening.

The artist, who clearly likes to perform, also fronts a shimmery indie band called “Cheese on Bread.” He says that his music allows him to indulge what he considers his petty emotions, while his theater pieces give him the space to investigate more complicated problems. In these works, Fishback follows what he calls his “rabbinic imperative,” the demand that he speak up and speak out.

In the end, Fishback fits into a broad, particularly Jewish tradition of argument and invective, whose adherents court both acceptance and rejection. And getting them together in one fell swoop is the mark of its success.