How America Came To Think ‘K’ Is OK 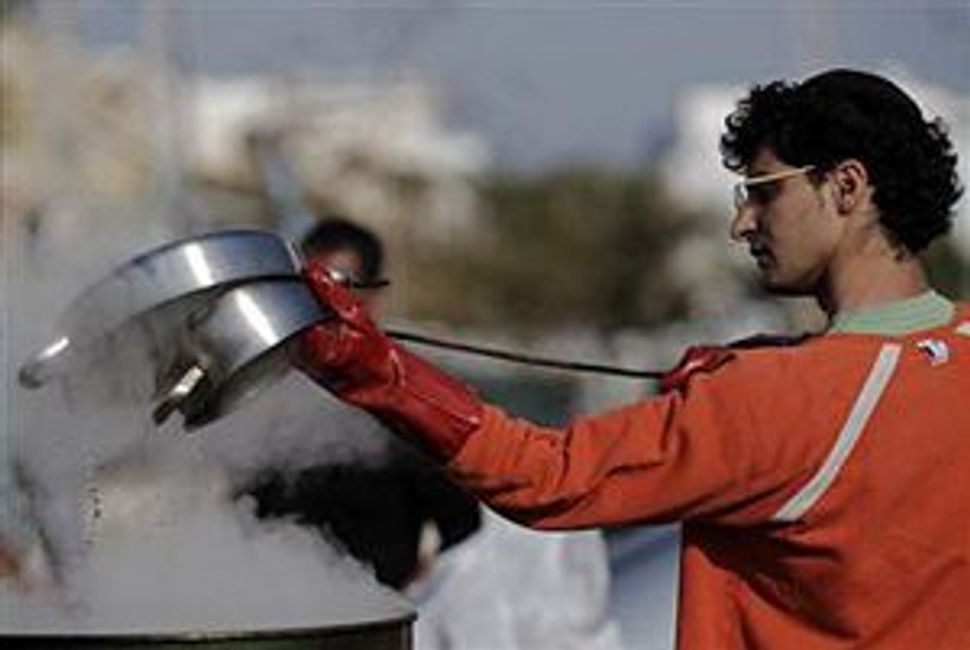 Boiled to Perfection: Pots are made kosher for Pesach. Image by Getty Images

Kosher Nation: Why More and More of America’s Food Answers to a Higher Authority
By Sue Fishkoff
Schocken, 384 pages, $27.95

Anyone who has ever spent time label gazing while at the supermarket has surely noticed the alphabet city of hekhshers — OU, OK, Kof-K, Star-K, KSA, cRc — staring back from a jar of gefilte fish, bagged lettuce or a box of Oreo cookies. This ubiquity of certification is rather startling, especially considering that up until about 90 years ago, the ancient Jewish dietary laws had existed entirely without them. Today, however, the industry represented by those tiny seals of approval is worth $200 billion annually (up from $32 billion a mere two decades ago), and kosher-certified products can be found in virtually every grocery store aisle, from Brooklyn to Boise, Idaho. 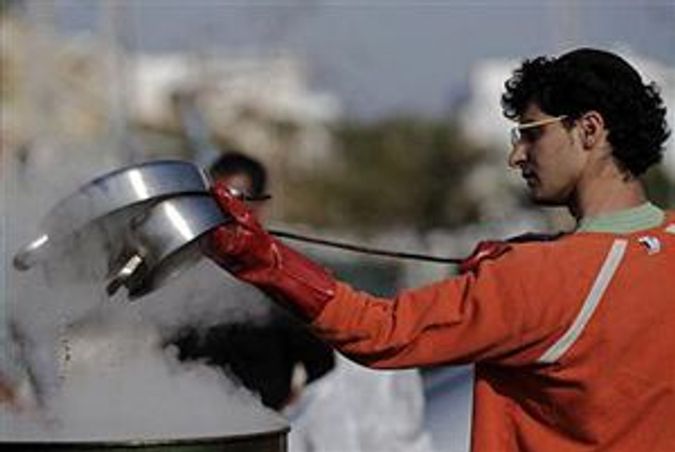 Boiled to Perfection: Pots are made kosher for Pesach. Image by Getty Images

How did kosher certification grow so popular so fast? With Jews making up less than 2% of the country’s population, it seems certain that the answer is rooted in something other than increased religious observance. In her new book, “Kosher Nation: Why More and More of America’s Food Answers to a Higher Authority,” author Sue Fishkoff explores this gastro-religious phenomenon and its implications for the way we eat.

The first hekhsher, Fishkoff writes, was pioneered in 1923, when a then-fledgling organization called the Orthodox Union convinced the H.J. Heinz Company to carry certification on its vegetarian beans. Half a century later, the industry had made modest gains but was still largely confined to the Jewish market. Then, in 1972, Fishkoff writes, “Hebrew National launched a television ad campaign (for their hot dogs) that forever changed the way Americans look at kosher food.”

The ad, which introduced the notion that kosher food “answers to a higher authority,” resonated with American consumers living in the anti-authority swirl of the 1970s and looking for reassurance that their food was clean and safe. “The government may not protect you (from unsavory artificial ingredients and additives), the ad suggests, but Jewish law will,” Fishkoff writes.

Consumers took note, ushering in an age of unparalleled growth for kosher food. In the four decades following Hebrew National’s initial marketing triumph, the American food system has grown increasingly less personal and more industrialized — bringing with it high-profile food scares, from salmonella outbreaks to E. coli recalls. And over that time, the hekhsher has come to symbolize an extra set of discerning eyes watching over food production. It is no surprise, then, that the majority of today’s kosher consumers — “86 percent of the nation’s 11.2 million,” Fishkoff reports — shop with health and food safety rather than Halacha, Jewish law, in mind.

The underlying question that drives “Kosher Nation” — namely, “How and why is kosher food so popular?” — is compelling, but it is hardly the book’s only focus. As a veteran journalist of the Jewish press and author of “The Rebbe’s Army: Inside the World of Chabad-Lubavitch” (Schocken Books, 2003), Fishkoff has made a career out of asking questions that delve into the heart of contemporary Jewish life. To that end, she spends the majority of “Kosher Nation” exploring how the rapidly expanding kosher marketplace affects the 14% of consumers for whom kashrut is, indeed, a rule of life.

The resulting chapters offer a broad snapshot of kashrut in America today, covering the globalization of kosher food production, the laws behind kosher meat, the increasing availability of “good” kosher wine and the surprising resurgence of kosher interest within the Reform movement. Fishkoff devotes a chapter to the busy life of a mashgiach, or kosher supervisor, another to the dwindling Jewish deli and still another to the rise of nontraditional foods, like sushi, in such traditional settings as the Jewish wedding.

Some readers might balk at this breadth-over-depth approach, but Fishkoff sees “Kosher Nation” as an introduction to, not a definitive chronicle of, its vast and constantly evolving subject. “I look at this book as a conversation starter,” she wrote in an e-mail to the Forward: Think American Kashrut 101. To that end, “Kosher Nation” will likely find a home in college classrooms, book groups, and any place where discussing and exploring the subject at greater length is encouraged.

If Fishkoff betrays any bias in an otherwise refreshingly straightforward and well-researched piece of journalism (full disclosure: I am among the exhaustive list of people Fishkoff interviewed for the book), it is to encourage this type of deep personal investigation and involvement with our food. In 2006, Michael Pollan’s watershed book, “The Omnivore’s Dilemma: A Natural History of Four Meals” (Penguin Press), popularized this notion by imploring Americans to seek out the story behind their supper. Pollan’s influence is evident in the pages of “Kosher Nation,” as Fishkoff applies the writer’s “look beyond the label” (or hekhsher, in this case) philosophy to the realm of kashrut.

To get readers started, Fishkoff chose to end “Kosher Nation” with a chapter about the “small but fast-growing new Jewish food movement” — a collection of sustainable farmers and food producers, educators, activists, rabbis and consumers who have chosen to reinsert themselves into the kosher system as active participants.

The foundational purpose of the Orthodox Union, and the scores of other agencies that joined the O.U. over the past 87 years, is to take some of the logistical burden of observing kashrut off the consumer. And, indeed, the kosher industry has allowed observant Jews to enter the culinary mainstream with remarkable ease. But with that added convenience (scanning for a hekhsher on a package of chicken thighs is certainly easier than slaughtering, plucking and salting a chicken) comes a certain loss of control over one’s food choices. Today’s kosher consumers are left not only to decide which hekhshers they trust, but also to maintain a certain amount of blind faith that the certification agencies have their best interests at heart.

Often they do. But while marketing suggests divine oversight, kashrut mandates only a mashgiach. As Fishkoff writes, “Keeping kosher is a mitzvah, but giving kosher certification is a business.” Just like all big businesses, the kashrut industry is susceptible to compromised ideals caused by human error (at best) and deliberate fraud and corruption (at worst). Not coincidentally, Fishkoff began researching “Kosher Nation” in earnest in June 2008 — just a few weeks after immigration officials raided the Agriprocessors kosher meat packing plant in Iowa. Her chapter on the subject recalls one of the darkest moments in recent industrial kosher history.

The new Jewish food movement, Fishkoff writes, has developed in response to the type of consumer disengagement that allows the darker sides of the kosher industry to flourish unchecked. The ultimate goal is to help create a kashrut that truly embodies Hebrew National’s motto of “answering to a higher authority” — not only with regard traditional Jewish law, but also in terms of good business and ecological and social ethics. Economically speaking, these kosher food “reformers” are barely a blip on the radar screen, but Fishkoff writes that their impact can be felt in Jewish communities across the country.

“Kosher Nation” leaves readers with a kashrut that, like the Jewish community as a whole, is moving 100 miles an hour in multiple directions. It remains unclear which of these directions will dominate in future generations. But as the wrinkles of Jewish history unfold, readers will surely look to “Kosher Nation” for insight on how the foods Jews eat (and don’t eat) shape the Jewish community and, remarkably, the world.

For a Q & A with author Sue Fishkoff, visit the Forward and Hazon’s food blog, The Jew and the Carrot at www.forward.com.

How America Came To Think ‘K’ Is OK