Left Behind: A New Book Explores the History of Abandoned Wives 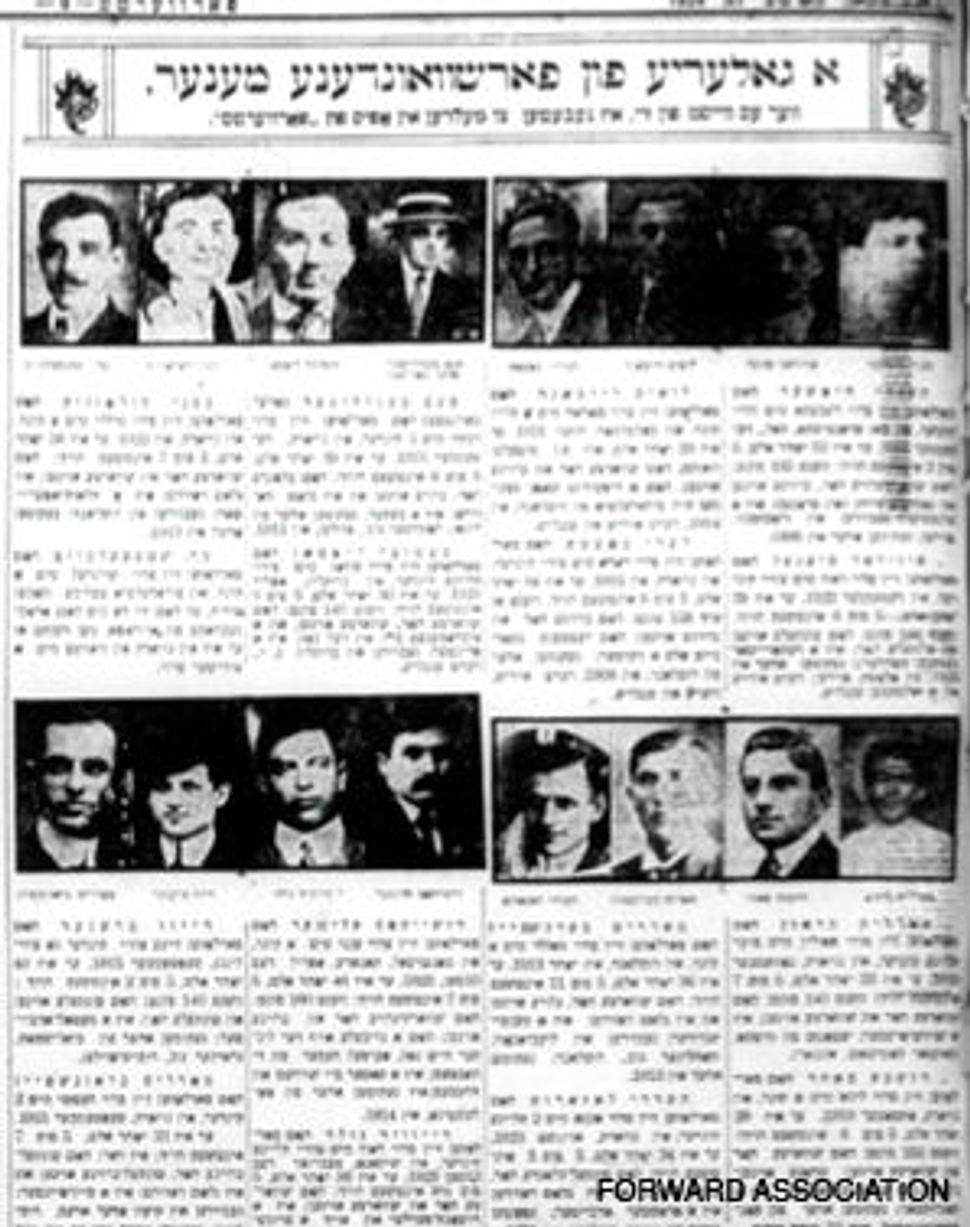 Gone: For decades, the Forverts published a rogue?s gallery known as ?A Gallery of Vanished Husbands? (?A galeriye fun far shvundene mener?). 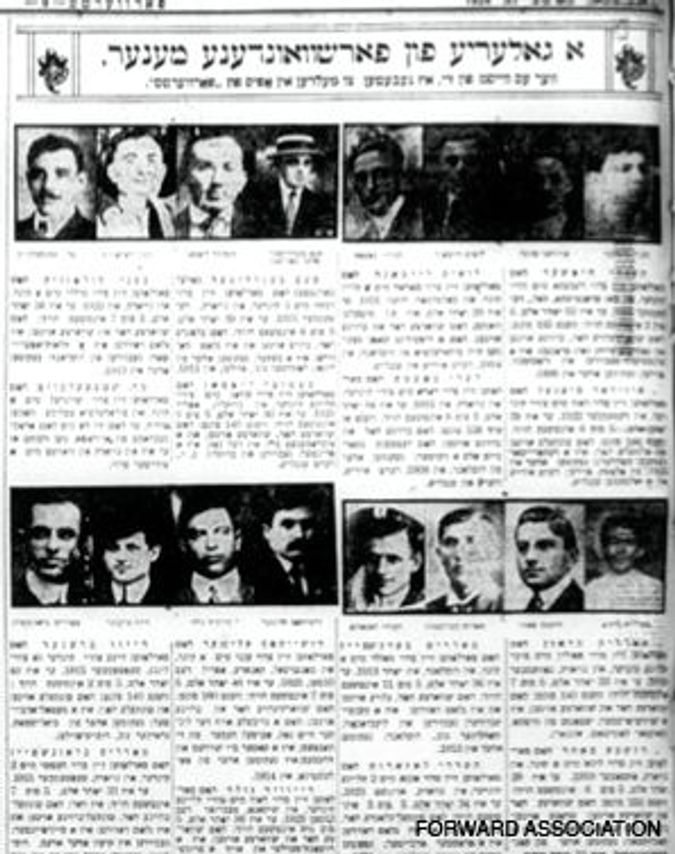 Gone: For decades, the Forverts published a rogue?s gallery known as ?A Gallery of Vanished Husbands? (?A galeriye fun far shvundene mener?).

We would do well to remember that when we say “according to the rabbis,” we are historically saying “according to men.” According to the male rabbis who wrote the Talmud and who, for European generations, were the sole interpreters of the law of the Torah, only one of their own can grant a divorce: Under the laws of Judaism, women, wives, are not allowed to divorce without the explicit consent of their husbands. That consent comes only in the form of a writ of divorce, called, in Hebrew, a get. If a woman is abandoned by her husband but not given a get, and she cannot prove that her husband is dead (in which case the marriage is annulled), she is called an aguna — literally, a “bound” or “chained” woman. She cannot get remarried. If she does get remarried, any issuing children would be considered bastards, and their line would be tainted (those same rabbis tell us) for 10 generations.

Bluma Goldstein’s new book, “Enforced Marginality: Jewish Narratives on Abandoned Wives,” is a tentative but emotional study of the aguna not in Jewish life but in Jewish journalism and literature (agunot is the Hebrew plural, agunes the Yiddish).

Aginut — the state of being an aguna — is a biblical or talmudic tragedy, a lapse of Jewish legality or hagiocracy whose vileness is recognized only by those communities it does not affect. Liberalism can decry it all it wants in its Sunday-brunch nooks and living rooms, but the hermetic communities of central Brooklyn and Jerusalem’s Mea Shearim (“the Hundred Gates,” metaphorically locked to women who wish to leave) don’t hear the lamentations from the ivied universities and those thinkers who’ve survived feminism with a vestige of their religiosity or spiritual hope still alive.

From Glückel of Hameln’s “Memoirs,” written between 1690 and 1719 in Judeo-German or Old Yiddish, through Solomon Maimon’s famous “Autobiography,” written in faulty German in the 1790s, to two masterworks of Yiddish literature — Mendele Moykher Sforim’s picaresque “Benjamin the Third,” and Sholom Aleichem’s exemplary epistolary novel, “Menakhem-Mendl” — Goldstein’s literary history of the aguna abandons sacred texts and rabbinic opinion in favor of the secularly scholastic or diverting vernacular. Glückel, the only woman among them, recounts a popular “young wives’ tale” of a woman who discovers her husband hadn’t left her but was murdered, and in this discovery obtains her divorce; Maimon, the Enlightenment scholar, does all he can to keep the wife and child he left behind in Lithuanian Poland from contaminating his worldly or only German pages, reflecting on the nature of self and his flirtation with Kant; and the two Yiddish writers exalt vagabond brotherhood or career over home and hearth, as their Benjamin and Menakhem-Mendl set off into the world to reinvent themselves, unencumbered by families to support and other demands of the feminine sex.

Abandonment — different, as it’s not a refusal to give a get, just the shirking of domesticity without a forwarding address — was overwhelmingly a New World importation. A century after Moses Mendelssohn and later Maimon’s emancipation by the Reich (and, elsewhere, by the Austro-Hungarian Habsburgs), the spread of tolerance decrees and enlightening capital freed up an entire continent of Jews to come to New York seeking fortune. Many of them — most were men — left behind wives and children until money could be saved for their passage, and many, whether intentionally or not from the beginning, leaving them forever. Often these women remained chained to husbands who would refuse to grant a get, as that gesture would have deprived their inconstancy of its only contingency — a legal status and residency should America collapse all around them: their fortunes, their visas, the garment or cigar-making businesses. But Ellis Island was only the most prominent Ur of masculine reinvention. Jews native to America abandoned their wives in much greater numbers than any organization would wish to propagandize (in 1948, for example, 5,177 cases were officially open).

It was in response to their abandonment that these women and children would turn to this newspaper, which, then as now, spoke their language. The National Desertion Bureau, a name later politically corrected to the Family Location Service, kept their records and provided information to the Forverts, which for decades published a rogue’s gallery known as “A Gallery of Vanished Husbands” (“A galeriye fun farshvundene mener”), appending to grainy portraits squibs such as the following:

Simon Wiseman, 34 years old, left his wife Yetti in Kasha, Hungary, November 1907. Mr. Wiseman was born in Odessa, Russia, and came to New York in 1907. Here in New York he married another woman, a Miss Tilly Scruss, with whom in May 1913 he had a child named Lou. Both women find themselves in great need. Wiseman is a chorus man, has sung in the Hippodrome in New York.

Jacob Grossman, 27 years old, a shoemaker by trade, disappeared from Richmond, Virginia, on November 7, 1915, leaving his wife Annie and their small baby. Mr. Grossman took everything his wife owned and left her without a penny. He was born in Russia and came to America eight years ago.

Jacob Hirsh or Joseph Sheinberg left his wife Toiba and their child Harry in New York in September 1915. Mr. Hirsh is 28 years old, a tailor by trade, born in Galicia, and came to America 14 years ago. Right after leaving his wife he wrote a letter to the Desertion Bureau that he was in Mt. Vernon living among Christians, but he did not give his address.

These accounts might read as ignobly enviable: Young men, in the prime of their lives, tried and tired by family life, exhausted by the need to earn a living, strike out into the unknown or sunset. Goldstein scolds that none of these advertisements ever much detailed the plight of the wronged, focusing instead on the scofflaw — whose iniquity, like that of Billy the Kid or Chicago’s lascivious gangsters, would be romanticized not just by Yiddish literature but also in drama, music and film. I am not sure Goldstein is right to want the defenseless to have publicized their misfortunes. Embarrassment, the Talmud tells us, is akin to homicide (and Rava tells us elsewhere, in commenting on the womanizing King David, that it is better to have relations with a married woman than to shame another man).

Goldstein concludes her book with that wholly legitimate child of journalism and posterity’s literature — namely, the memoir or autobiographical essay: Apparently, the author herself was abandoned in infancy. Her mother, a Russian immigrant, was ashamed that she could never “keep a husband.” Goldstein grew up in the tenebrous backroom of a dress shop in Detroit. The family wasn’t religious in America, but her mother was “bound” nonetheless — not by rabbinic legislation but by a culture of dependency that’s long since outlived its welcome.

Left Behind: A New Book Explores the History of Abandoned Wives