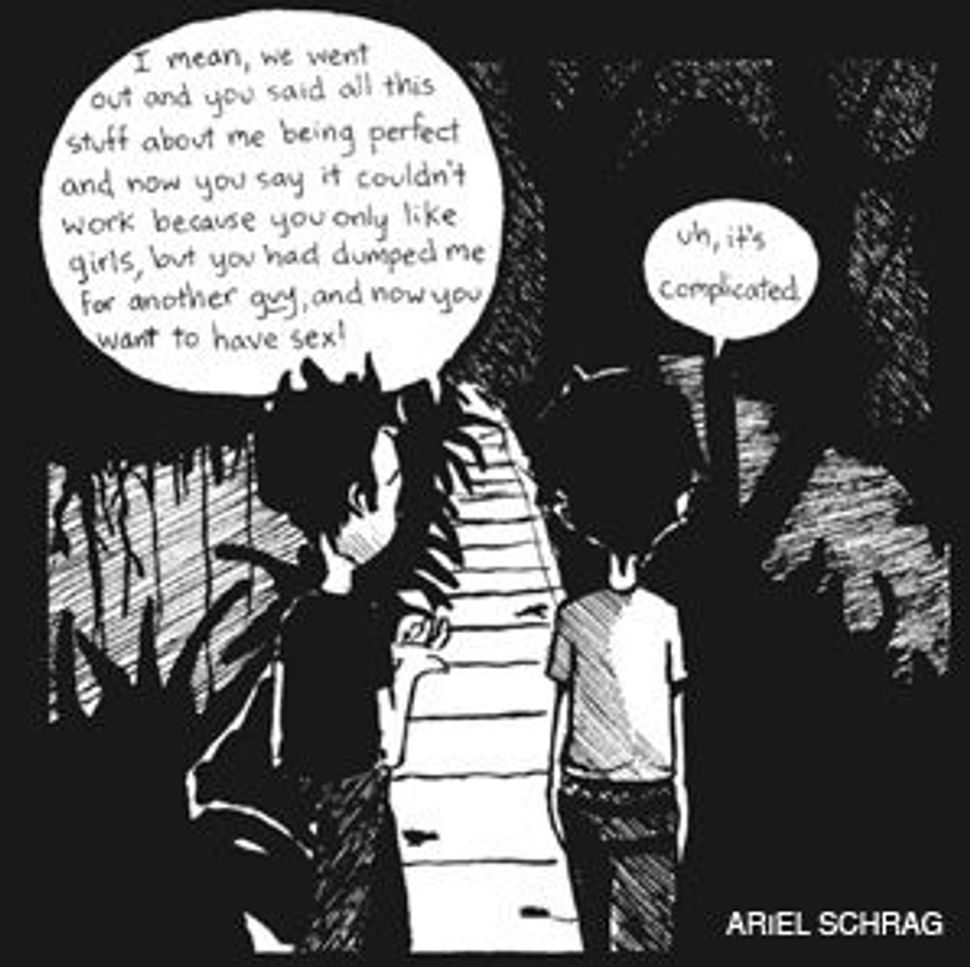 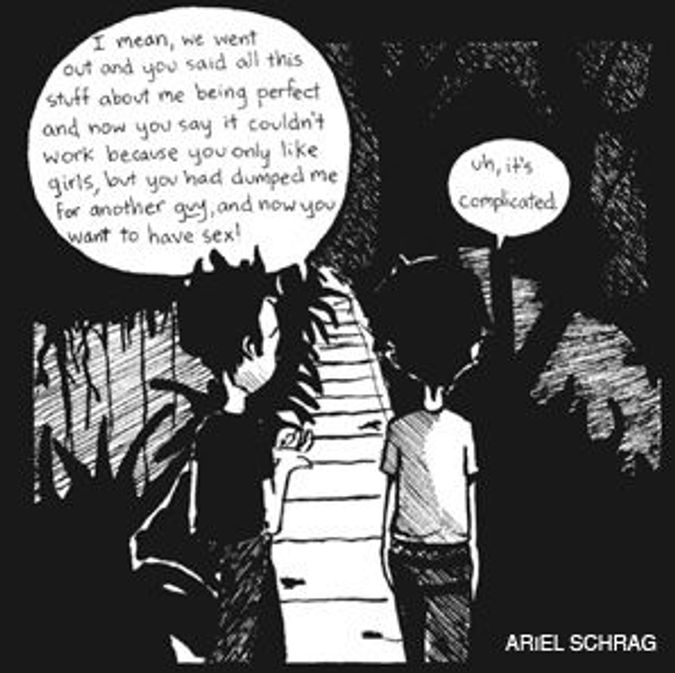 Actually, she graduated from Berkeley High School in California a decade ago, and since then she has earned an English literature degree from Columbia University, authored or edited several books, and spent two years as a staff writer and story editor on Showtime’s hit series “The L Word.” One of her books is being made into a movie, and she’s accomplished enough — her art having appeared in regional and national publications as well as in museums and galleries across the United States, Canada and Europe — to be teaching master classes.

But now, having left Berkeley and moved to Los Angeles (and to Brooklyn in the interim), she’s finally almost done with the intricate inking of “Likewise,” the last and longest of four autobiographical comic books chronicling each of her years at Berkeley High School. Schrag told the Forward that “Likewise” still feels real; she wrote and sketched it within a year of graduation, even if completing the elaborate art has taken so long since.

“I don’t feel like this book is really separate from the other three, because in the end it’s the writing that really matters,” she said. “But it’s weird that I’ve spent so much of my life sort of obsessing over this one year, going back and drawing the bookshelves and all the items in my room, scrutinizing every event.”

In addition to the book’s publication, Schrag is slated to make a series of public appearances in the San Francisco area. First, she’ll teach a master class on graphic novels May 19 at the Jewish Community Center of San Francisco, covering topics from narrative pacing to style to page layout; the following day, she’ll take part in a panel discussion of up-and-coming graphic novelists. Both events are part of the JCC’s month-plus-long “Serial Boxes” program, exploring the cultural impact of visual stories and the array of art, design and literary talent required to create them. Others participating in the series include Marjane Satrapi (“Persepolis”), Ben Katchor (“The Jew of New York”) and Schrag’s inspiration, Art Spiegelman. Although she lists Lynn Johnston’s “For Better or for Worse” among her early influences, Schrag said that Spiegelman’s “Maus” — which recounted the artist’s father’s Holocaust struggle and its reverberations through the family — “was the first comic book I read that came along with that kind of intensity and told a full story.”

Appearing to discuss her art at a JCC is a homecoming of sorts for Schrag, who credits a drama program at the Berkeley JCC with having “a huge effect on me creatively.” The daughter of both a Jewish artist-turned-lawyer and a non-Jewish mother who is a composer, Schrag noted that though her family wasn’t religious, she has always identified with her Jewish tradition.

From an early age, she loved telling stories with her drawings: “I have this video from when I was 11. It’s called ‘I want to be a cartoonist.’”

She began documenting her freshman year of high school, and was thrilled when friends and family snapped up photocopies, eager for more. Her books — “Awkward,” “Definition,” “Potential” and the forthcoming “Likewise” — dissected her life with unflinching honesty and sharp detail, from relatively carefree ninth grade (friendships and crushes, concerts and movies) through tough transitions to adulthood (smoking marijuana, her parents’ divorce, her own coming out first as a bisexual and then as a lesbian).

The Village Voice has called her “an imaginative anthropologist of the post-punk set,” but Schrag said that “it was a natural evolution. Every year I became a better drawer and a better storyteller as I got older. I wanted to show how much you change; the amount everyone changes from ninth grade to 12th grade is enormous. And for the 12th grade year, I wanted to take that to an extreme.”

Schrag published the first three books at local copy shops and then later with Slave Labor Graphics; now they’re being reissued by Simon & Schuster’s Touchstone division. Movie rights to “Potential” have been snapped up by Killer Films (“Boys Don’t Cry,” “One Hour Photo,” “Far From Heaven”) with “The L Word” director/writer Rose Troche slated to direct. Schrag said the script is practically finished, some roles have been cast and financing is being assembled.

After that, “I have a bunch of projects I want to do. I want to do more television,” she said. “I had a great experience on ‘The L Word,’ and I’d like to do more of that. And I have a collection of short comics I’ve been working on that I want to put out.”

Or perhaps a novel, or a children’s book, she said. “I love all of it.”