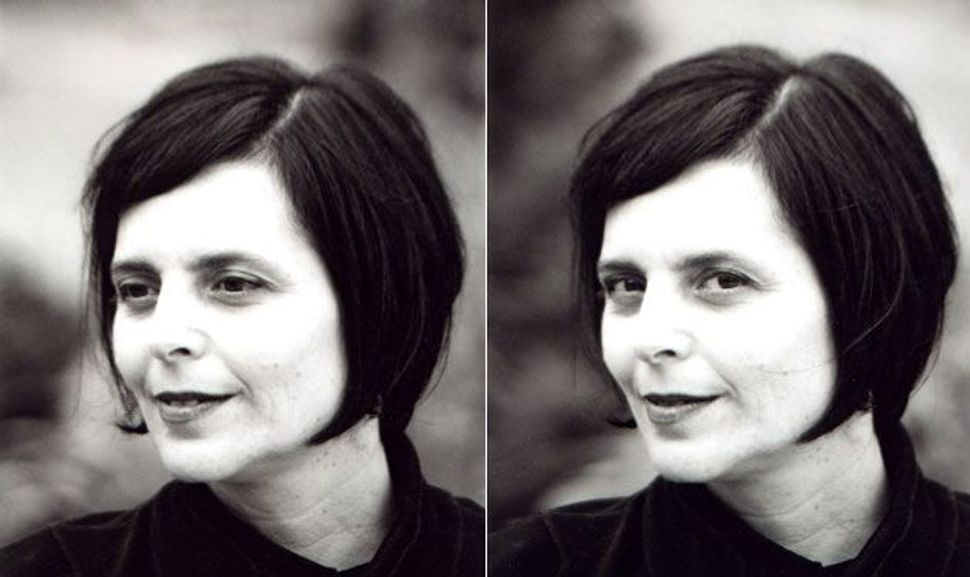 Da Capo?: Composer Chaya Czernowin?s innovative and enjoyable music is available on a new CD and will be performed in a variety of venues in Europe and America over the winter and spring. Image by COURTESY SCHOTT PROMOTION

Over the next six months, Czernowin’s work will be performed in Prague, Mainz, Cologne, Berlin, Leipzig and Vienna, at the French Embassy in Washington, D.C., and at an April 15 Composer Portrait evening featuring her work at Columbia University’s Miller Theatre. The different works rendered by varied musicians offer unusual combinations of instruments that make unexpected, subtle sounds and captivate a whole variety of audiences with their emotional resonances.

Born in Haifa in 1957 to a Polish father and Russian mother, Czernowin studied at Tel Aviv’s Rubin Academy of Music. She recently chatted by phone with the Forward from her Massachusetts home, and recalled how the elder Czernowin, an assistant engineer, enthusiastically played music as an amateur: “My father is very musical and extremely talented, and he brought music into my life. He used to play the accordion, and I would hear Russian songs when I was a child.” At the academy, she studied with the legendary Israeli composer Abel Ehrlich, whom she remembers as “eccentric and full of life, so vital; his sense of humor was outrageous. What [Ehrlich] taught mainly was independence. At the time, composition students were often mere disciples, but Ehrlich taught us to be individuals; he was not a master to be imitated.” What’s wrong with admiring a teacher? Czernowin noted: “I don’t tend to admire people… when you admire, you somehow put yourself down and look instead to a model, and I don’t do that.”

Yet audiences across Germany have admired Czernowin for her 2000 Holocaust-themed opera, “Pnima… Inwards,” inspired by David Grossman’s novel “See Under: Love.” The opera was performed in Munich in 2008 and in Stuttgart in July and October of this year to Europe-wide acclaim. Another stage work, “Adama” (“Earth”; 2004–05), about a doomed love affair between an Israeli and Palestinian, was crafted to be performed in tandem with Mozart’s unfinished work “Zaïde.” (It premiered at the 2006 Salzburg Festival.) Both operas are now available on DVD, from Mode Records and Deutsche Grammophon, respectively. Czernowin describes “Adama” as a way of discovering a “means of dialoguing which is not intended to reconcile or merge, but rather to allow each partner in the dialogue to create a landscape based on disagreement or dissonance.”

Czernowin’s smaller-scale compositions pursue this goal of agreeing to disagree even more captivatingly, through acutely sensitive, questing musical artistry. Czernowin, who was appointed professor of composition at Harvard University last year, has a new CD, “MAIM,” out from Mode Records. In June, The Boston Musical Intelligencer praised a performance of some of those chamber works as “rich with new sounds… and she gives them time to register and settle into your ear.”

One more monumental, multiform work, “Anea Crystal: Two String Quartets and an Octet,” will be performed in Washington and Toronto in January and then in New York next April. “Anea Crystal” consists of two string quartets, “Seed I” and “Seed II,” which can be played separately, or together as a string octet. There is precedent for such dauntingly complex technical challenges, since the French Jewish composer Darius Milhaud’s 14th and 15th string quartets were likewise designed to be performed together as an octet.

But once this has been accomplished by as notable a composer as Milhaud, why do it again? Czernowin notes that each of her solo quartets creates an independent sound layer. The music of “Seed I,” she states, is “very close to the human voice; the sensibility is very intimate,” whereas “Seed II” is more inspired by nature. She explains:

I wanted to create a dichotomy between the two, so that when you hear the first or second, you cannot conceive of them together, but when they are superimposed, you realize for the first time that they can be complementary. To bring disparate things together, whereupon merging them does not take away from their dissonance, but instead revitalizes this dissonance, we arrive at a third state where they create something entirely different through their relationship. It’s like a married couple, where you meet first the husband and then the wife and you cannot imagine them together. Yet when you finally see them together, they add a different element which you could not foresee beforehand. They possess a unity which is based on the fact that they are so very disparate, which is what allows something completely new to emerge.

Odd couples continue to coexist in another work on the Miller Theatre’s program, “Crossbreed” (1995), for Japanese mouth organ or accordion, alto saxophone and double bass. Inspired by Franz Kafka’s short story “A Crossbreed (A Sport)” about a half-cat, half-lamb “Crossbreed” offers, Czernowin said, “very disparate sounds sharing the same place, whether the Japanese instrument or the accordion from folklore, alongside the saxophone from the world of jazz, and the double bass from either classical or jazz music. It’s a trio of separate universes joined together.” Parts of “Crossbreed” reflect a familiarity with the barnyard, with presumed animal bleatings evoked by various instruments. This may strike some chamber music fans as sounding like the rural inspiration of the string quartet subtitled “From My Life” by Czech composer Bedrich Smetana. There is captivating charm in these sound universes.

Although invisible to the concertgoer, Czernowin’s own charming personality and photogenic good looks similarly defuse what might seem dauntingly modernistic “research” in some of the music she writes. I ask her if it matters whether a composer looks like the notoriously homely modernist Morton Feldman, or like Marlene Dietrich, whom one contemporary female composer — who, I hasten to assure the interviewee, shall remain nameless — slightly resembles. Czernowin laughs and immediately identifies the pseudo-Dietrich: “It’s Kaija Saariaho!” Seriously, she adds: “I find it very, very interesting that most of the women composers I know who are successful are not bad looking. I wonder if this plays a role in terms of what [a composer] must possess in order to assert [herself]. Charisma is surely a very important element.”

Czernowin further adds, with poignant deliberation, that Feldman, who died in 1987, was “not photogenic, but extremely charismatic in very many ways… the contrast between [Feldman’s] beautiful, spiritually elevated music and the down-to-earth New York Jewish near-stereotype he adopted at times was very, very interesting.” Just as interesting, if not more so, is Czernowin’s remarkably flowering compositional talent. Listening to her music, pianist and conductor Stephen Drury aptly commented in a 2009 program note for a New England Conservatory concert, is “like watching a mystery unfold into a bigger mystery. My attention is grabbed first by the strange sounds, often seeming to come from animals, the weather, other natural forces, rather than musical instruments.”

Her innovation and intriguing ideas lead to a musical experience that, unlike products by some overly celebrated contemporary composers, is neither touristic art nor merely repetitive droning. Whether plumbing mysteries or weighing microclimates, Chaya Czernowin’s chamber music is alluringly compelling.