Coming Out Of Left Field 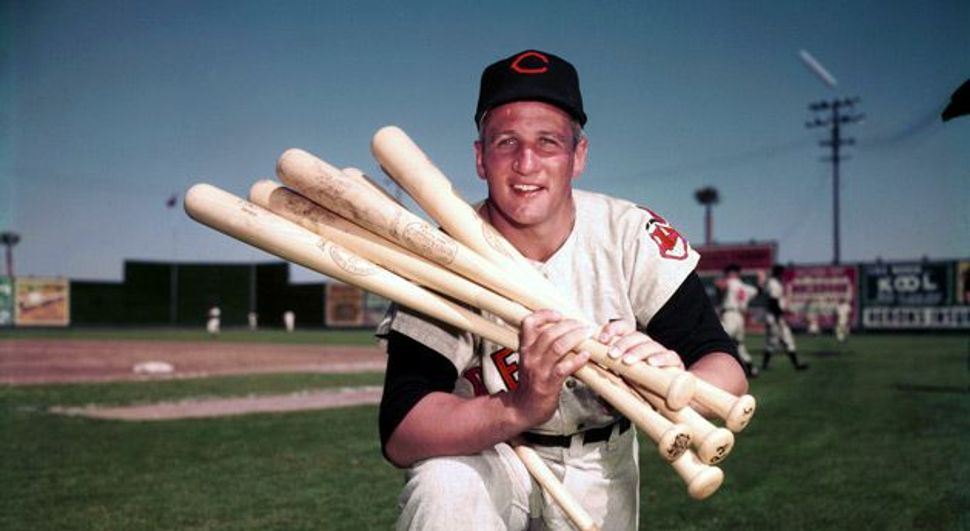 At Bats: Al ?Hebrew Hammer? Rosen grew up in Miami but made his name as a muscu- lar power hitter for the Indians in Cleveland from 1947-1956. Image by COURTESY OF 7TH ART RELEASING

A new documentary, “Jews and Baseball, an American Love Story,” which opened on November 5 in New York, is a film that largely succeeds at telling the story of a great American people (the Jews, that is) via the tale of a great American pastime. It may not be a grand slam, but it’s at least a double.

Oh, I can’t do sports metaphors. Sorry. Bench me. (Is that even what they do in baseball?) Truth be told, even though my family has been in this country for more than 100 years, baseball holds no allure for any of us. I have no recollection of anyone watching any sport at all on television in my home as I was growing up, and this has continued to hold true. I just heard that the World Series ended and that the Giants won. Frankly, that was surprising to me, because I’d been sure the Giants was a football team.

But even though I’m about as far from a baseball fan as a person possibly could be, I understand its appeal and the importance of Sandy Koufax finally speaking about his Jewishness. And the film held my interest (at least initially — more later) because of its take on the sport as a particularized slice of American Jewish history.

By the mid-19th century, the movie (narrated by Dustin Hoffman) states, baseball was the most popular sport in the country. And by the end of the Civil War, Jews were one-half of 1% of the American population. At the end of the 19th century, however, immigration brought up that number to 4% — hardly an insignificant increase.

Within this context, baseball — learning all about it and playing it, whether in official leagues or in pickup games on the street — offered Jews a new golden door into what it was to be not just Jewish, but also American. Baseball became a lingua franca, something for Jews to talk about with their non-Jewish neighbors. Even the Forward is mentioned in the context of this baseball craze, as the film notes inspirational editor Abraham Cahan as a great advocate of Jewish kids learning how to talk baseball. This was particularly important at a time when anti-Semitism was on the rise because of increased immigration. To give a sense of the ideological climate at the time, Henry Ford, the film quotes, wrote that America’s problems could be boiled down to three simple words, “too much Jew.”

Seeing the Jewish enthusiasm for baseball, the film points out, scouts looked for a Jewish equivalent of Babe Ruth in order to pack the stands. They found it in Mose Solomon, who, soon dubbed “the Rabbi of Swat,” had the highest batting average of any Jewish major league player. Andy Cohen followed.

Despite the yearning to get the Jewish fans in the stands, the attitude toward Jews on the field was not always so welcoming. Cohen played to the accompaniment of catcalls of “Christ killer,” and recalled that once, when he caught a particularly difficult ball, a fan yelled, “Just like the rest of the Jews — they take everything they can get their hands on.” That being said, Cohen’s career in 1928 playing second base for the New York Giants was a storied one, with “Ice Cream Cohens” — no joke — being sold in the stands. The next year, however, Cohen broke his leg and never returned to the majors.

Enter one of Jewish baseball’s great protagonists, Hank Greenberg, 1935 MVP of the American League and famed game-skipper-due-to-Yom Kippur. Larry King gets to voice the semi-bizarre conspiracy theory that Greenberg didn’t break Ruth’s record because “they would never allow a Jew to break Babe Ruth’s record.” A film could be made about this contention alone, but thankfully, this one glosses over it. I was much more interested in the film’s brief discussion of Moe Berg, an American League catcher who went to Princeton and Columbia universities, spoke several languages and may have worked for the OSS, predecessor of the CIA. I wished more time had been spent on him; a film could be made about this one man alone, who may have, among other things, spied on Japan in the 1930s when sent there as part of an exhibition all-star team.

By the time the film gets to Koufax, another Yom Kippur game skipper, the documentary apparently unintentionally morphs into “Famous Jews In Baseball,” a sort of Jews’ Cooperstown (Jewperstown?) Hall of Fame, and that’s too bad. The appeal of the film, for a non-sports fan, lies in its willingness to examine American history through the prism of one sport, both those who played it and those who love it. By delving into the Jewish use of baseball to assimilate into American culture, the film appeals to fans and nonfans alike, and effectively distinguishes itself from a Major League Baseball “Jewish Greatest Hits” equivalent.

With the historic component being treated as background rather than foreground, the movie regresses into a kind of cinematic Encyclopedia Judaica: Sports Edition. Of course, I’ll concede that there are many people who are tickled by the apparent incongruity of Jews being good at sports and who are delighted by this to a degree that can surely fuel a film, however much I may suspect that such feelings of pride teeter precariously on the edge of self-hatred. (“Can you believe it?? A nerdy Jew — good at sports! What will they think of next?”) As intermarriage rates climb, though, and essentialist Jewish characteristics become more and more difficult to pinpoint, perhaps the delight in such things will be as antiquated and anachronistic as peanuts and Cracker Jack (now verboten, thanks to nut allergies). In other words, for better or for worse, there’s no longer such a thing (if there ever were) as a typical Jew. Maybe Jews in sports will become less of a punch line and more of a nonissue, in which case we’d benefit from a film that explores more of the unique history of a unique people.

Jordana Horn, the New York correspondent for The Jerusalem Post, is a lawyer and writer at work on her first novel.

Coming Out Of Left Field