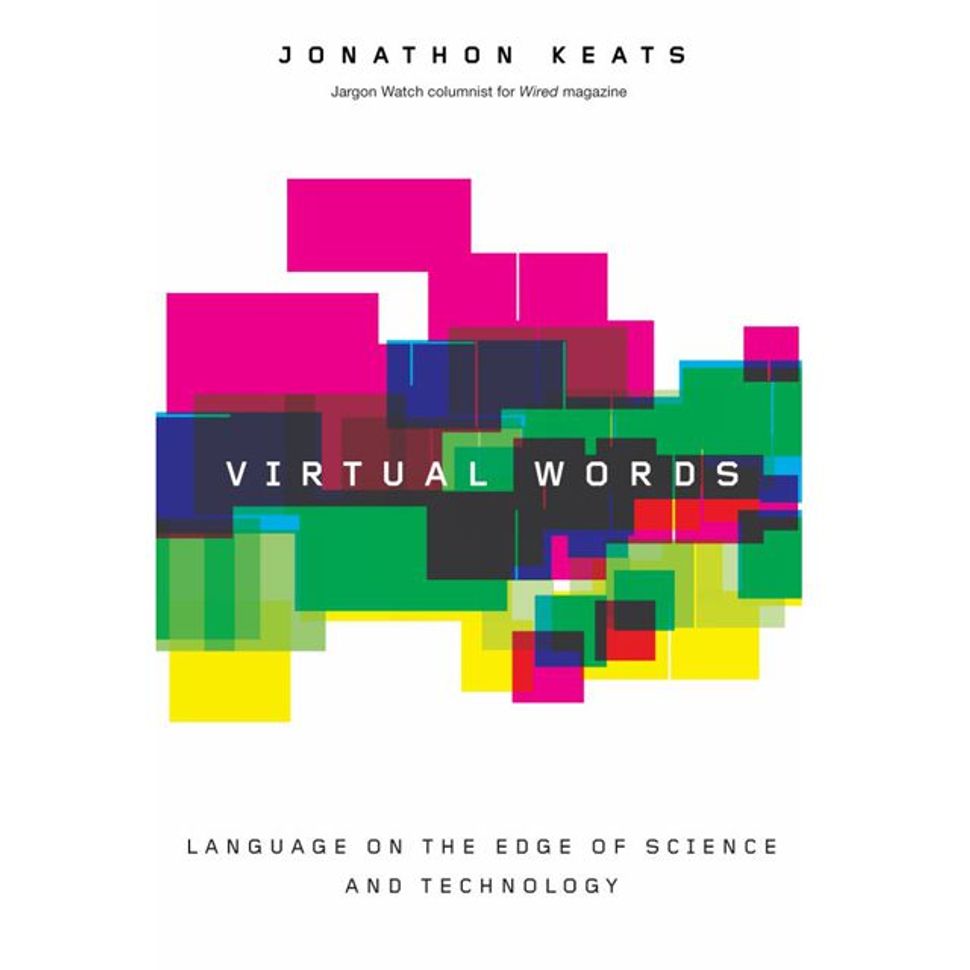 Virtual Words: Language on the Edge of Science and Technology
By Jonathon Keats
Oxford University Press (2010), $19.95

According to the eminent seventeenth-century botanist John Parkinson, one of the plants that grew in the Garden of Eden was the vegetable lamb. Also known as the borametz, this creature resembled a young sheep in every important respect, except that it grew from a seed planted in the ground. Reports of it date back at least as far as Herodotus, and the fourteenth-century explorer John Mandeville claimed, in his notoriously unreliable “Voyages and Travel,” to have tasted one “although it were wonderful.”

Only in the 1800s was the legend debunked, largely on the initiative of the British naturalist Henry Lee. (He convincingly speculated that borametz rumors began with the spread of the cotton plant, which to an untutored eye looked as woolly as a sheep.) Yet the dream of cultivating meat off the hoof, of growing muscle without the animal, was not so easily dismissed. In his 1931 book, “Fifty Years Hence,” no less a figure than Winston Churchill anticipated a time when “we shall escape the absurdity of growing a whole chicken in order to eat the breast or wing, by growing these parts separately under a suitable medium.” He didn’t live to see it happen. Half a century passed and vegetable meat remained as elusive as the Garden of Eden. But the technologies necessary for cultivation were evolving, quietly developing as researchers studied subjects as far afield as organ transplants and stem cells. Gradually a few laboratories, some of them funded to develop tastier astronaut cuisine for NASA, began growing potentially edible animal tissues in a bioreactor. Then everything changed again in 2008, when People for the Ethical Treatment of Animals (PETA) announced a prize of $1 million to the first person to produce “an in vitro chicken-meat product that has a taste and texture indistinguishable from real chicken flesh to non-meat-eaters and meat-eaters alike.” Almost overnight in vitro meat, or at least the idea of it, was headline news: The ancient dream, newly named, went prime time.

Except that to many people, perhaps a majority, it sounded like a nightmare. The term in vitro meat evoked a dystopia midway between “Brave New World” and “The Matrix.” A few bloggers even suspected that PETA’s contest was meant to repulse people into going vegetarian. But PETA’s offer was in earnest, a pragmatic gesture that caused a “near civil war,” cofounder Ingrid Newkirk confessed to the New York Times. Moreover the term in vitro meat was not PETA’s invention, and the man who claims to have coined it, Willem van Eelen, is one of the technology’s most steadfast advocates. Now the world’s only recipient of in vitro meat patents, van Eelen started thinking about lab-grown victuals in the 1940s, after nearly starving to death in a World War II prison camp. For him in vitro meat was a term that evoked salvation from hunger through scientific progress.

In vitro meat thus has the strange status of being simultaneously an accolade and an epithet. It’s the linguistic equivalent of a double agent. Researchers use the word to advocate their work, and Newkirk has gushed that “in vitro meat is a godsend.” Critics, on the other hand, gleefully embrace the term as a phrase of readymade irony, as the Times food columnist Mark Bittman has done under headlines such as “Get Out Your Chemistry Sets: It’s Time to Make Meat!”

Certainly there are other linguistic double agents. For instance, referring to someone as a Republican in a red state generally carries different connotations than it does in a blue state. What makes in vitro meat notable is that it has no inherent politics. In fact looked at from a neutral position the term is purely descriptive.

In vitro, literally meaning “in glass,” was first formally defined in the 1894 edition of Gould’s Dictionary of Medicine, which noted that the term was “applied to phenomena that are observed in experiments carried out in the laboratory with microörganisms, digestive ferments, and other agents, but that may not necessarily occur within the living body.” This definition is still essentially accurate — allowing for the fact that most laboratory glassware is now plastic — and it applies to in vitro meat as aptly as it does to in vitro hemolysis or in vitro ubiquitination. To say that meat is in vitro is simply to specify how the muscle was grown, in contrast to the in vivo meat sold at the local butcher shop.

Of course nobody refers to a steak or a chop as in vivo meat, and not only because the in vitro alternative is still commercially unavailable. The word meat is not scientific, whereas in vitro and in vivo are exclusively so. The linguistic clash calls attention to the language, freighting it with significance. And what it signifies depends on the speaker. For those who see technology as a panacea in vitro meat evokes progress. For those who view technology as a monster in vitro meat has the sound of frankenfood, with a built-in yuck factor — which is a serious impediment to communication, signaling a cultural divide and suggesting why such schisms are so difficult to bridge.

As in vitro meat becomes reality it may have less in common with the universally acclaimed borametz than with manna, which took its name, according to Exodus, from the Israelites’ question to Moses, “What is it?” and possessed, according to the Talmud, “all flavors at will.” Palatable to those who desire it, repugnant to those who resist it, in vitro meat promises to be true to its word, whatever we make of it.

Read a review of Jonathon Keats’s exhibit ‘Pornography for God’ on The Arty Semite.