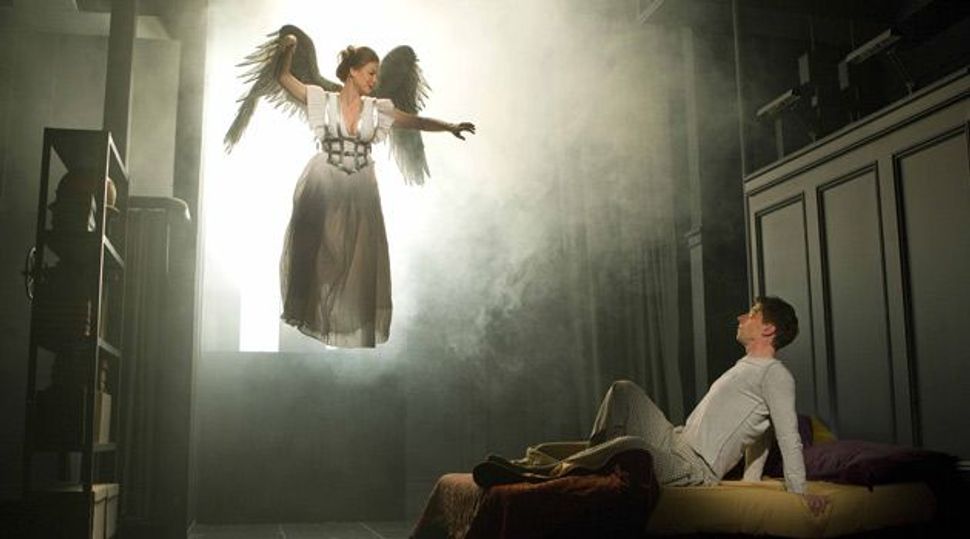 ?There Is No Zion Save Where You Are?: The Angel (Robin Weigert) appears to Prior Walter (Christian Borle) in the new re-stag- ing of ?Angels in America.? Image by JOAN MARCUS

As part of a season devoted to Tony Kushner’s work, Signature Theater Company has daringly chosen to remount the epic masterpiece “Angels in America” for the first time since its Broadway run in 1993, providing an opportunity to look at the play anew, this time with an eye toward how it holds up outside of the politically fervid context that gave rise to it.

“Angels in America” is a God-haunted play, and the God that haunts it is ruthlessly Jewish. The world the play presents is vast enough to accommodate Mormons, unbelievers, Christians, Eskimos, Angels (of course) and talking mannequins, but its vision of how we’re all bound together is ruled by a vindictive, pitiless spirit that’s deeply unimpressed with the human race. A vengeful God. An absent God. A God not of forgiveness, but of judgment, of justice. When the angels convene, near the end of the play, they wear judges’ robes and speak in lawyerly tones. When God reveals Himself to the play’s AIDS-stricken hero, Prior Walter, erstwhile prophet and scion of a Mayflower family, He takes the form of an aleph in flames. In kabbalistic terms, aleph: oneness: the ineffable name of G-d.

As Prior’s lover, Louis Ironson (Zachary Quinto), the obsessive, self-torturing Jewish radical who serves in many ways as the fulcrum around which the other characters in the play pivot, says, while explaining how Jews conceptualize the afterlife,

For us it’s not the verdict that counts, it’s the act of judgment…. It’s the judge in his or her chambers, weighing, books open, pondering the evidence, ranging freely over categories: good, evil, innocent, guilty; the judge in the chamber of circumspection, not the judge on the bench with his gavel. The shaping of the law, not the execution.

A succinct and evocative description of the talmudic inquiry at the heart of the Jewish faith, but also, the process by which the play goes about pursuing its dramatic goals. “Angels in America” might be best thought of as an extended talmudic argument about the good and evil and innocence and guilt with which Lewis is obsessed, as well as about the great American topics: equality, liberty, the responsibility of the state toward its people, the very existence of God itself.

As in all of Kushner’s work, the drama of ideas slamming against each other, and the political ramifications of these ideas, is as crucial to the play as the emotional trajectory of the characters. People in Kushner’s world talk and talk and talk some more; they debate, they correct themselves and others, they argue as though their souls depend on it. You can almost see their foreheads bulging as they struggle to process the information, the stuff of the world, with which they’ve filled themselves up. And part of his genius lies in how Kushner can tie his grand political and intellectual concerns to the souls of his characters, how conscious he is of the body/mind conundrum.

But this is a fantasia, not a panel discussion. Angels come crashing into apartments. City streets transform themselves into the wide glacial plains of Antarctica. The ghost of Ethel Rosenberg hangs around the hospital, watching her old nemesis, Roy Cohn, die, and when he does, she says Kaddish over his body. Characters wander through the “threshold of revelation” and into each other’s dreams. The world we can’t see, the life of the noumenon, is as alive in the play as the mineral grit of our everyday reality. In another bit of talmudic dramaturgy, the worlds of the play themselves are in conflict. Whether the diminished earth we trudge through every day can be justified when held next to the euphoric release of the hallucinogenic, heavenly alternatives — this is what’s at stake in “Angels in America.”

The 1993 Broadway production tilted overwhelmingly toward the fantastical. Every scene, no matter how prosaic, floated across the stage like a star on a cloud. The spectacle was truly spectacular, and sitting in the audience, witnessing the show, you felt as though you were being called to fly away into the more just future the play held forth for you. It was easy not to notice how earthbound so much of the story really is, or how central this fallen reality is to the sad vision the play reveals.

Signature’s revival of the play, which runs until February 20, replaces this grandeur with a homier, more handmade aesthetic. At times, over the course of this production’s seven hours (split into two parts, performed in rep: Part 1: Millennium Approaches, and Part 2: Perestroika), you can imagine what it must have felt like to be in the audience during the early years of the play’s life, before the Broadway stagecraft glammed up the works, when the draw of the play was the force and passion with which it gave voice to the alienation, desperation and defiant hope of a vilified community staring death in the face every day. These rough edges are the production’s strength as well as its weakness.

The director, Michael Greif, has resized the play to fit within the intimate dimensions of the Signature’s Peter Norton Space. In the process, he’s brought the characters down to earth. Maybe too much so. “Angels in America” requires bravura performances. The characters are alive in so many ways all at once, that to pull them off, the actors must be simultaneously deep in their emotions and conscious of the plastic edges of their craft. They’re best played just this side of camp — capital-A acting, as Olivier would have said.

Greif gets this kind of performance out of Frank Wood, whose vindictive Roy Cohn seems to embody his bankrupt, conservative beliefs in every twitch of his gaping, drooling mouth. He gets this performance out of Bill Heck, whose magnetism and charm as the closet-case Joe Pitt just grow stronger as the character grows more vulnerable. Especially in the second part of the show, he gets this performance out of Christian Borle, who as Prior Walter convincingly marches through the gates of insanity and back, simultaneously wasting away in his AIDS-ravaged body. More often, though, the actors are defeated by their task; searching frantically for the small domestic drama to which they can apply their method, they shrink onstage.

With nearly nonstop visual projections and a set that resembles a hoarder’s cluttered attic, Grief has teased out the cacophonic urban elements in the play, showing how so much of the action transpires in a brutal, freezing New York City that doesn’t care a bit about the people living in it. Unfortunately, this, too, creates problems for the show. With all that stuff jutting out and moving and junking up the stage, there’s not a single seat in the house that doesn’t suffer from sightline problems. Most of the action ends up taking place in the narrow band of space in front of the set. The characters stand or sit in parallel lines, not moving, without room to flesh out and enliven the text. It’s like a really fancy dramatic reading. When the actors do venture deeper into the stage, half the room cranes their necks to see what’s happening. This would be problematic in any play, but in “Angels” it’s catastrophic: The problems with the staging continually intrude on the theatrical illusion, and when the fantastical elements swoop into the story, they can’t enchant like they’re supposed to.

Even problems this grave can’t kill the play, though. Kushner is one of the two or three best writers at work in the world today. And as any talmudic scholar can tell you, it’s nice to have the chance to live inside the text again, regardless of how creaky the translation.

Joshua Furst, a frequent contributor to the Forward, is the author of the novel “The Sabotage Café” (Knopf, 2007) and the collection of stories “Short People” (Vintage, 2004).