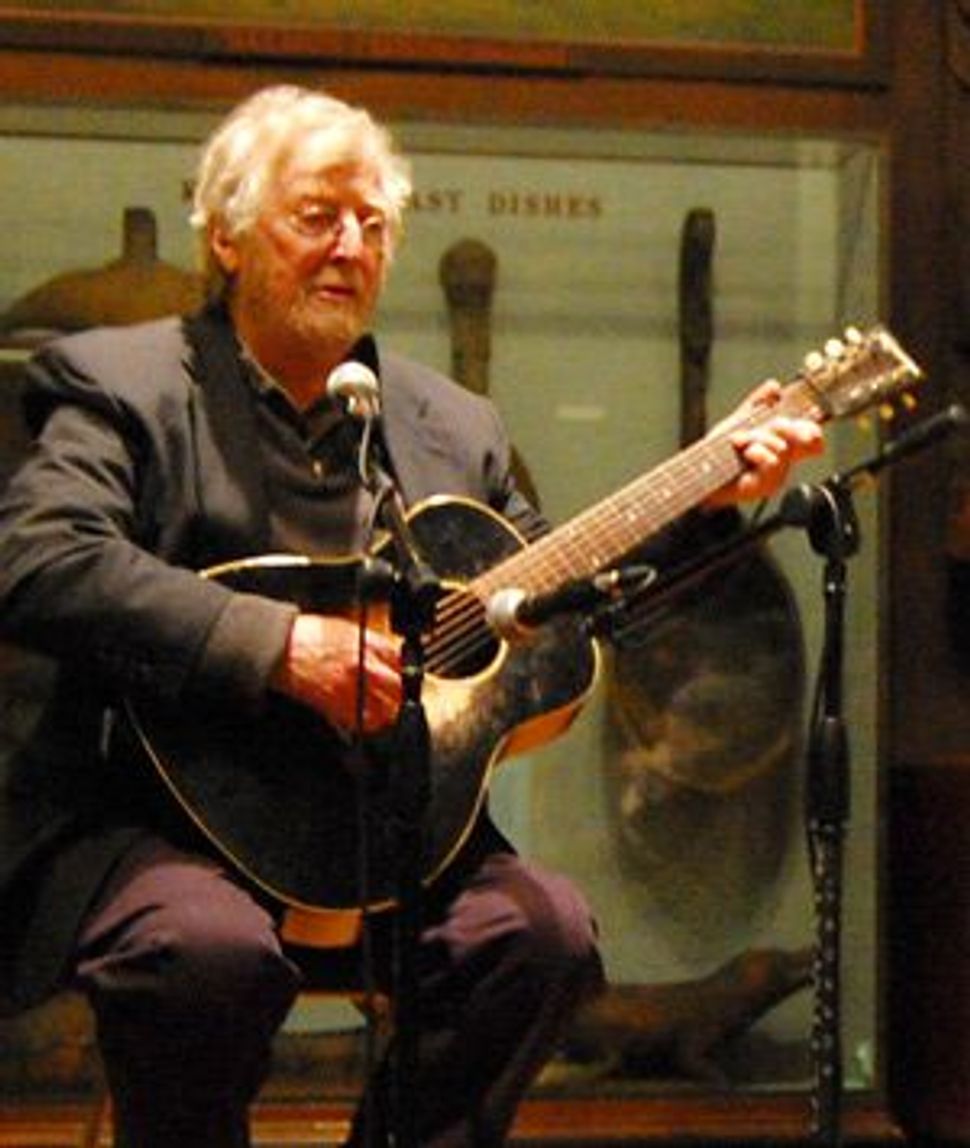 At the end of John Cohen’s 1963 film, “The High Lonesome Sound,” Roscoe Holcomb, a coal miner, construction worker and banjo player, sits hunched over a songbook on the threadbare sofa in his ramshackle house, singing the Baptist hymns he learned as a boy. Holcomb has long since abandoned the austere Old Regular Baptist Church to join the Pentecostal Holiness Church, which, unlike the Baptists, welcomed banjos, guitars and other instruments as part of their worship. But in a quiet moment, Holcomb returns to the spiritual chants of his childhood. 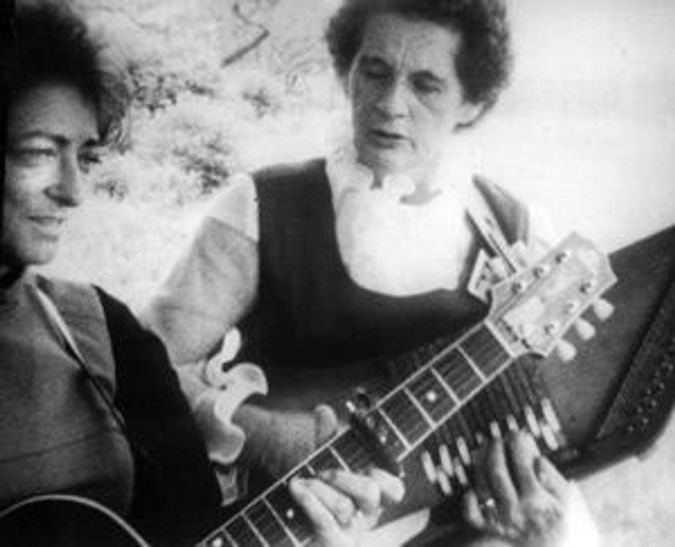 How Does the Song Go?: Sara and Maybelle Carter in a 1981 film by John Cohen. Image by COURTESY JOHN COHEN

“I didn’t know quite how we were going to end [the film],” Cohen recalled on a recent Saturday morning over breakfast at a diner near his home in Putnam Valley, N.Y. “But I had shot a scene of [Holcomb] just sitting alone at home, lining out these old Baptist songs, reminding himself, I think, of his past, of the music he was raised on. It reminds me of my grandfather, in shul. You’re part of a community, but you’re very solitary, and the music is just this deep moan.”

Forty-seven years later, Cohen is a spry 78-year-old whose rust-orange beard is now nearly white, and whose career defies categorization. As a photographer, Cohen captured the cultural tumult of midcentury Manhattan, including many pictures of the young Bob Dylan; as a documentary filmmaker, he has made some 16 films about traditional communities in the United States, Greece and Peru. His recording of a Peruvian wedding was selected by NASA as part of Voyager’s Golden Record to represent humanity to the cosmos.

As a musician, he was an early instigator of the folk music revival in the 1950s and ’60s, laying the groundwork for such subsequent cultural movements as the klezmer revival of the 1970s. And, according to what Cohen calls a “true rumor,” he was the inspiration for the Grateful Dead song “Uncle John’s Band.” 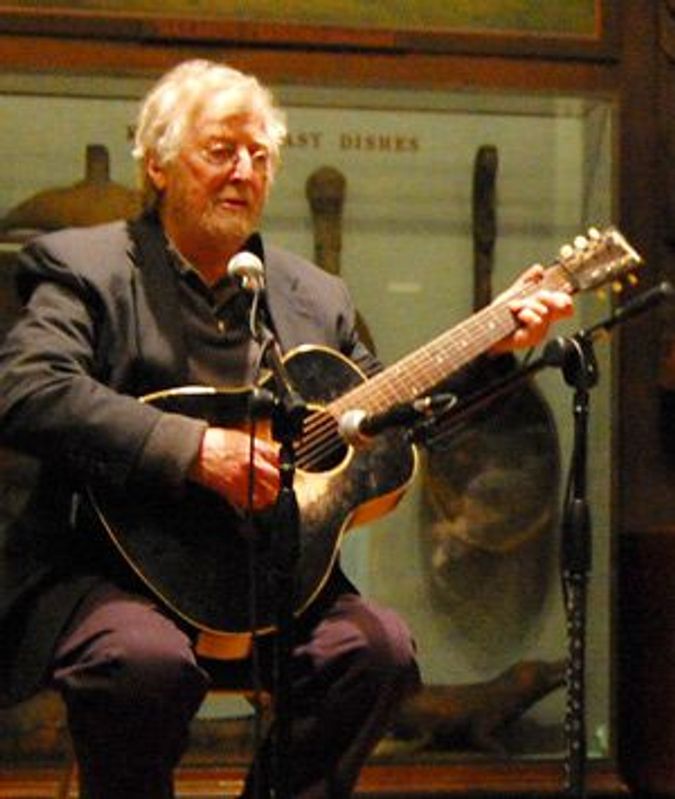 “I’ve been called an ethnomusicologist, a visual anthropologist, a professor, a filmmaker, a musician,” Cohen said of his wide-ranging activities. “I think it’s the inadequacy of our language, or our need to put a label on every aspect of things. But to me, I just move from one to the other.”

Cohen’s latest film takes him back to his love of American folk music, as well as to his first attempt at filmmaking. “Roscoe Holcomb: From Daisy, Kentucky,” a movie made out of footage left over from “The High Lonesome Sound,” presents a picture of the man and the music that became, thanks to Cohen, a central influence on the folk revival. After being named best short documentary at the Woodstock Film Festival last October, “Roscoe Holcomb,” now available on DVD, received its official premiere November 13 at the Museum of Natural History’s Margaret Mead Film & Video Festival as part of a retrospective of Cohen’s documentary work.

Born in 1932, in the Sunnyside area of Queens, Cohen moved with his family to the suburbs of Long Island when he was 9. Though he recalls his parents practicing “some kind of international folk dancing,” it wasn’t until the age of 16, at a summer camp in the Catskills, that he first heard Woody Guthrie’s “Dust Bowl Ballads,” an album that depicted Guthrie’s experiences as an “Okie” during the Great Depression. It exposed Cohen to a part of America he never knew existed.

“It was the kind of music that I could connect with: social causes and people in America having a hard time,” Cohen said. “I found this music opened up a huge world to me.”

After high school, where his newfound interest in folk music made him something of a social misfit, Cohen attended Williams College, at which he spent a “misdirected year” before transferring to Yale to study painting and photography. There he made friends with Tom Paley, a mathematics student and fellow folk music fanatic who introduced him to hootenannies and to the first stirrings of the folk revival.

Upon graduating from Yale, Cohen worked as a photographer in New York for such magazines as Esquire and Life, taking pictures of the Abstract Expressionist painters he had met as an art student, as well as shots of the Beat and folk music scenes in Greenwich Village. He also volunteered to be the set photographer on “Pull My Daisy,” a short film adapted by Jack Kerouac from part of his play “Beat Generation” and directed by photographer Robert Frank, who at that time was Cohen’s neighbor on Third Avenue.

While Cohen’s participation in both the folk music scene and the avant-garde art world was unusual, he found the noncommercial nature of the two cultural strains perfectly compatible. “When I thought about the raw energy of painting that was going on, and the raw energy of the music I was hearing, it didn’t seem that different to me,” he said. “It was not smooth, background music; it was raw and had jagged edges.”

Cohen also nurtured his musical interests by forming an old-time string band with Paley and Mike Seeger, half-brother of folk musician Pete Seeger. Calling themselves the New Lost City Ramblers, the trio aimed to play faithful renditions of the edgy songs that came from the mining towns of Appalachia. The tunes’ themes of violence, poverty and religious salvation were often sanitized from the commercial folk music then making its way onto the nation’s airwaves. To perform material of this nature, however, the group first had to discover authentic songs to sing. So in the spring of 1959, Cohen set off for Kentucky.

“In those days I didn’t have a car, so I went to Kentucky by bus,” he recalled. “I didn’t have any leads, didn’t know where I was going.”

Cohen arrived in the town of Hazard, got a room in a boarding house and spent his days, recording gear in tow, visiting amateur mountain musicians. One sweltering Sunday afternoon, after visiting a fiddler who was too old to play anymore, Cohen was wandering around the outskirts of Hazard, unwilling to return to the rooming house. Without anywhere else to go, he decided to take the first dirt path off the main road. After crossing a small railroad bridge, he ran into a couple of children and asked them if they knew any banjo players. They pointed to a house, where he found a man he had recorded in a bar the previous night. After a few tunes, a thin, worn-looking man named Roscoe walked in. The man took the banjo and played “Across the Rocky Mountain.”

“My hair stood up on end,” Cohen recalled. “It was the most moving, touching, dynamic, powerful song. Not the song itself, but the way he sang it was just astounding. And I said, ‘Can I come back and hear you some more?’”

The result was the album “Mountain Music of Kentucky,” which Cohen released in 1960 together with a booklet of photographs he had taken during the trip. The album exposed, for the first time, Holcomb’s spare, penetrating style to a general audience, and it quickly gained a cult following. But Cohen felt unsatisfied just recording and taking pictures separately, and in 1962 he returned to Kentucky, where he filmed “The High Lonesome Sound” over a period of six weeks while living in a lumber camp.

Along with unheard music and musicians, Cohen discovered in Kentucky a sense of community and connectedness that was missing from his suburban New York upbringing. Though he always had an awareness of being Jewish, the trauma of anti-Semitism had severed his family from its Eastern European roots. Upon returning from the South and asking his grandmother about her childhood in Russia, the answer he received was the story of a pogrom.

“I was finding something that I was not getting in the suburbs, that there was something people were connected to in their music and their lives that I had been deprived of,” Cohen said. “I wasn’t deliberately deprived, but I was protected, I was sheltered. They didn’t want to talk about it — it was too painful. That gave me a reason to continue with what I was finding out about America.”

Though Cohen continued to pursue his study of traditional cultures in places like Kentucky and Peru, his work inspired another generation of Jews to rediscover their own music and heritage. When the first klezmer revival bands started cropping up two decades later, they used his methods as a template for reviving a culture that had been given up for dead.

“The mechanisms he used, performance, publication, concerts — it was a unique way of reanimating a culture,” said banjo player and klezmer revival leader Henry Sapoznik, who in 1985 founded KlezKamp: The Yiddish Folk Arts Program. “It was also the model, pretty shamelessly lifted, that I used for my work in Yiddish music. If you replace Roscoe Holcomb with Dave Tarras, we were doing the same reclaiming of a cultural heritage through a direct transmission from hand to hand.”

Over the decades, Cohen continued his career as an artist, making films and records, taking photographs and teaching at Purchase College, SUNY. More recently, he has begun preparing his archives for the Library of Congress. But it is not his own legacy he is concerned with so much as the legacy of the artists whose music he helped discover.

In that respect, things are looking up. Along with a new film, Cohen has a new string band called The Dust Busters. Though its members are young enough to be Cohen’s grandchildren, they are drawn to the same rawness and vitality that Cohen recognized when he first heard Holcomb in Kentucky.

“My running joke about The Dust Busters is that you take the three of them and add their ages together, and I’m still older. But we play together like it was meant to be,” Cohen said. “I think that the outlook I pursued with the New Lost City Ramblers and my own work has affected a lot of young people to follow a path that they wouldn’t have followed otherwise. Even though Roscoe never became a big star, and I never became a big star, the music is out there and it’s still going.”

Ezra Glinter is the books editor of Zeek: A Jewish Journal of Thought and Culture and a contributing editor to the Forward.