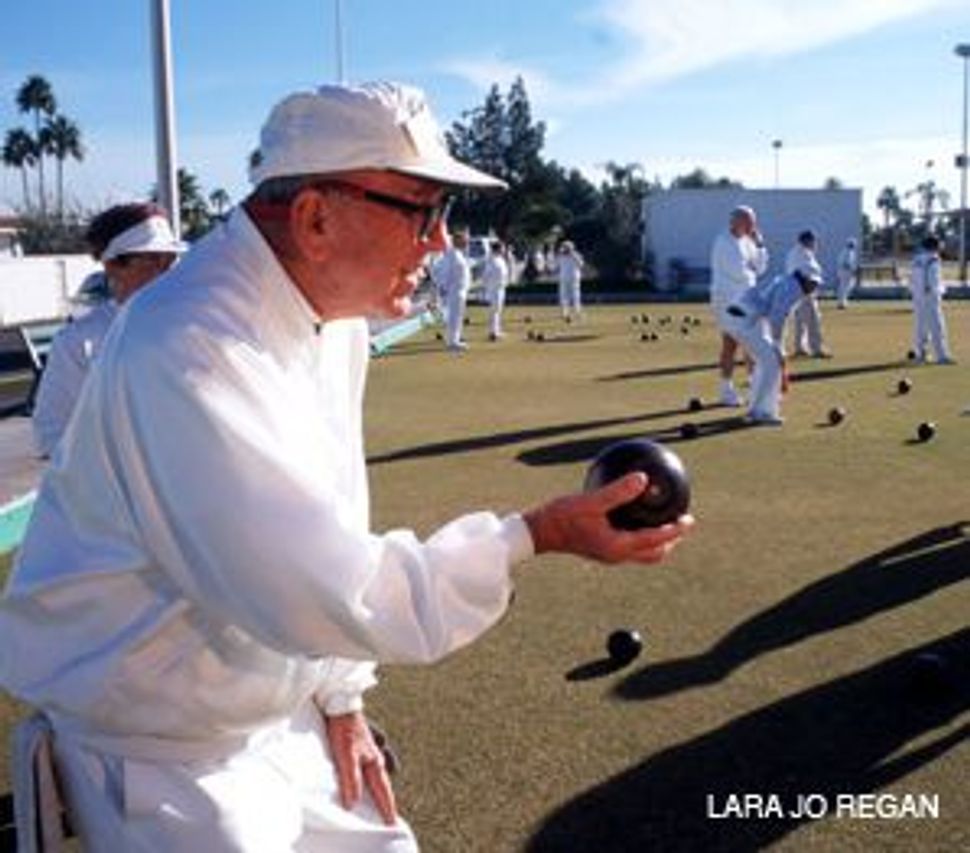 HAVING A BALL: Seniors enjoy lawn bowling at an Arizona retirement community. 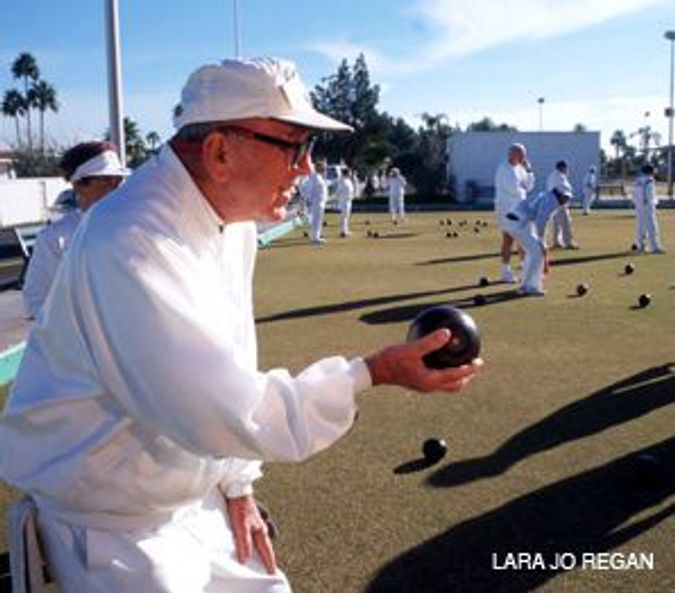 HAVING A BALL: Seniors enjoy lawn bowling at an Arizona retirement community.

Del Webb’s Sun Cities in the Arizona desert; The Villages north of Orlando, Fla.; a new Catholic-themed town called Ave Maria: Home to nearly 12 million people, these are America’s largest and most popular gated retirement communities, or, as Andrew D. Blechman calls them in his new book, “Leisureville,” “America’s retirement utopias.” The Sir Thomas More reference is neither obligatory nor inapt; the guiding concern of Blechman’s inquiry is what this age-based phenomenon means for us as a society, and what its moral implications are for the future.

Historically, Jews have often been at the forefront of utopian movements — especially failed ones — and from Karl Marx to William Levitt, they have publicly staked their reputations in these places that, by definition, do not or cannot exist. Youngtown, the first retirement community in America, was built outside Phoenix in 1954 by Benjamin Schleifer, a Jewish immigrant from Minsk who, apparently, was inspired by Plato and the 71st Psalm: “Be thou my strong habitation, whereunto I may continually resort.” (After Youngtown, he went bankrupt trying to found a kibbutz for American retirees in the Arizona desert.) The founder of The Villages in Florida, Harold S. Schwartz — whose ashes are permanently part of the statue erected to him in the “village” of Spanish Springs — was the grandson of Jewish immigrants from Hungary. But while many members of these communities are Jewish, too, and synagogues can be found amid their golf turf and sprawl, Blechman’s primary interest is not in the eerily false perfection of such places, but rather in the American psychology of segregation, radical individualism and the fears underlying the dreams of their residents: Who or what are these pleasant-villagers trying to keep out?

One obvious culprit is old age itself. Blechman is shocked by the total absence of Halloween at his uncle’s upscale community in central New Jersey, where children “aren’t forbidden so much as discouraged.” He remembers that the new hospital in The Villages will not include a maternity ward. And in a chapter on housing laws, he correlates class with race, showing how legislation against families with children is often intended as a barrier of entry for minorities and other low-income groups. It is clear that after religion and language, the multigenerational family has become the last casualty of immigrant life in America. With their children and grandchildren living scattered across all 50 states and various parts of the world, many of those wealthy enough to retire prefer the arrested development of age-segregated communities, with their health care facilities, private newspapers, elevator music stations and, in one case, the world’s longest golf cart parade of “nearly 3,500 low-speed vehicles” to the exigencies of a typical hometown. Yet in one sense their excesses and feelings of entitlement are only symptoms of our own.

The Villages, for example, is the largest gated retirement community in the world, spanning “three counties, two zip codes, and more than 20,000 acres […] subdivided into dozens of separate gated communities,” that share “two manufactured downtowns, a financial district, and several shopping centers, […] all of it connected by nearly 100 miles of golf cart trails.” Unlike Sun City, which has aged less gracefully than it promised to, The Villages is still relatively young and expanding. With 75,000 residents and room for 35,000 more, it comprises a kind of Disneyland for people who no longer want to pay taxes for schools they’ll never attend — though presumably their grandchildren will — and, just like Disney’s pet project in what once was Florida swampland and citrus, it is essentially a company state accountable only to Chapter 190, an umbrella law that gives developers jurisdiction over the land they’ve purchased at lucrative rates and over the homeowners who reside there in ignorance of how their villages are actually governed. Thus beloved by real estate developers, by the food and beverage industry and by such retailers as Wal-Mart, these retirement colonies are in many ways the reactionary offspring of late capitalism, utopias for tax-shy seniors who would rather turn their backs on a system that provided for them when they were “55-” and on its tradition of democratic representation in which the welfare of all citizens — not just the leisure class — is taken into account.

But not all retirees are deadbeats; some of them just want to live completely surrounded by people exactly like themselves. In their increasingly younger old age, more and more Americans prefer to be comforted by the predictability of a fabricated paradise where they can ultimately choose to ignore the world beyond. Living under a kind of voluntary siege, promiscuity and its consequences are the only things thriving in these “geritopias”: According to Blechman, seniors “are now one of the fastest-growing populations at risk of STDs,” because “more than sixty percent of sexually active older singles have unprotected sex.” As if on cue, he meets Mr. Midnight, a pot-smoking, Corvette-driving, 63-year-old former biology teacher from Illinois. Mr. Midnight tells Blechman that due to the favorable female-to-male ratio, a bachelor can have a memorable time in a retirement community, though he does have a couple of rules: not sleeping with anyone younger than his kids, and not falling in love. Another resident bachelor, 73, tells him about the teenage waitresses, wife-swapping and a group of swingers allegedly posing as a wine club. Finally, a female retiree says, “The only problem with being a widow in The Villages is that you’re so busy you forget you are one,” and life, presumably, beats on at its electronically synchronized pace.

Part exurban exposé, part postmodern Roald Dahl parable, “Leisureville” reads more accurately like a dark Stanley Elkin novel — remember the mortuary ‘burbs of “The Rabbi of Lud” or Main Street, U.S.A. in “The Magic Kingdom”? — in which a satiric journalism of today’s lifestyle realities has replaced the journalistic satire of yesterday’s consumer fads. Only whereas Elkin’s novels ultimately reassured us by mocking the sincerity of human folly, the surreal humanity of characters like Mr. Midnight and Del Webb — the construction magnate whose experience in building planned communities before Sun City included internment camps for more than 25,000 Japanese — is often all too real, and close, for comfort.

Were the sun to have set on him in The Villages, even Ben Flesh — the Franchiser — might have run for the still-underdeveloped Florida hills.

Daniel Elkind is a writer and translator who lives in Brooklyn.