Where Jews Choose To Muse 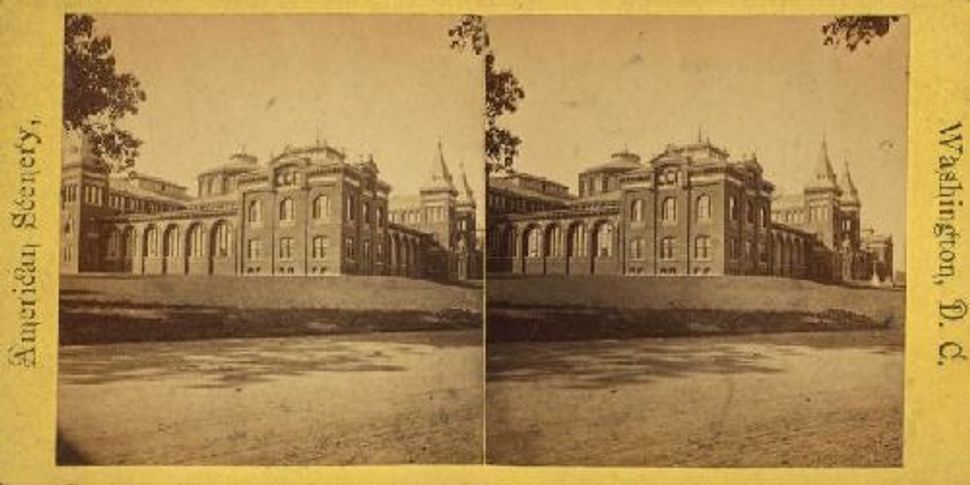 November’s gala opening of the National Museum of American Jewish History, in Philadelphia, has thrust into public consciousness the centrality of museum-going to the modern Jewish experience. For increasingly large numbers of American Jews, as well as their Christian neighbors, the museum, rather than the synagogue, has become the public face of the American Jewish community.

Little wonder, then, that much is made of the new museum’s physical attributes — of its square footage, sublime building materials, splendid amenities (“a perfect venue for your special event,” a promotional brochure trills) and prominent relationship to the urban landscape. So much emphasis is placed on these features of the institution that I can’t help but wonder what Cyrus Adler would have thought of it all.

“Cyrus who?” you may well ask.

A loyal son of Philadelphia, Cyrus Adler was just about everywhere in 20th-century American Jewish life: president of the Jewish Theological Seminary as well as of Dropsie College, charter member of the American Jewish Historical Society and, in the early years of his career, a high-ranking official of the Smithsonian Institution. As a librarian, then a curator and then as assistant secretary, Adler was, arguably, the first to have made the case for the importance of placing Jewish culture on display in modern America.

Although his ambitious plans for the creation of the “American Jewish Historical Exhibition” in the nation’s capital city never came to fruition, Adler did succeed in assembling and exhibiting a first-rate collection of Judaica at what was then the Smithsonian’s United States National Museum and what is today the National Museum of Natural History.

Writing in 1912 to Jacob Schiff, one of his patrons, Adler expressed delight at the “beautiful and dignified” manner in which Jewish ritual objects were presented.

More to the point, he went on to explain, “these cases [of Judaica] at the National Museum are at present the only representation of anything distinctively Jewish in the National Collections which meets the eye of visitors from all over the country.”

Adler had good reason to be pleased. It had taken him quite a number of years to build a collection, much less formulate an interpretive strategy that made room for a Kiddush cup or a shofar, a mezuza or an Omer calendar. In a museum given over to chronicling and celebrating the glories of our collective patrimony and the ways in which the nation exemplified the very best virtues of Western civilization, such items could not easily find their footing.

But the Smithsonian curator made sure they did. Seeking to position the Jews within the grand scheme of things, he downplayed distinctiveness in favor of context. Jewish history, Adler argued, constituted one long unbroken arc that originated in, and took its cue from, the biblical era; modern-day Jews, in turn, were the descendants of the ancient Israelites, a “Biblical nationality,” as he put it in a report to Congress.

Given the nation’s fondness for all things biblical, Adler’s account of Jewish history turned out to have been a most congenial, even neighborly, way to insinuate the Jews into the national narrative. But the pursuit of neighborliness was not the only thing on his agenda. At a time when racialist conceptions of identity were gaining in strength within the highest reaches of the museum world, he placed a premium on ideas. Offering a counter-narrative to interpretations that highlighted racial typologies, and with it, static and essentialist notions of what constituted culture, Adler made a point of emphasizing the fluid and generative intellectual contributions of the Jews to Western civilization.

This curatorial strategy was not without its limitations, especially when it came to establishing the protocols of display. For most museum-goers, then, as now, objects matter more than their accompanying labels; for Adler, it was the other way around. He valued the material artifact for the ideas it contained rather than for its formal aesthetic properties. Artifacts were meant to be read rather than viewed.

Today’s curators have little truck with Adler’s view of things. Placing their faith in all manner of bells and whistles, they seek to render the museum experience a visual and even a sensory experience rather than an exclusively intellectual one. Their way couldn’t be more different than his. For Adler, the museum was an extension of the library; for today’s generation of museum professionals, the museum is an independent entity with a set of conventions all its own.

All the same, Adler’s sensitivity to the importance of display — his astute realization that exhibitions actively shaped the public’s understanding of what constituted identity — continues to animate the contemporary museum. His ghost is alive and well and inhabiting the sparkling new galleries of the National Museum of American Jewish History.

Where Jews Choose To Muse