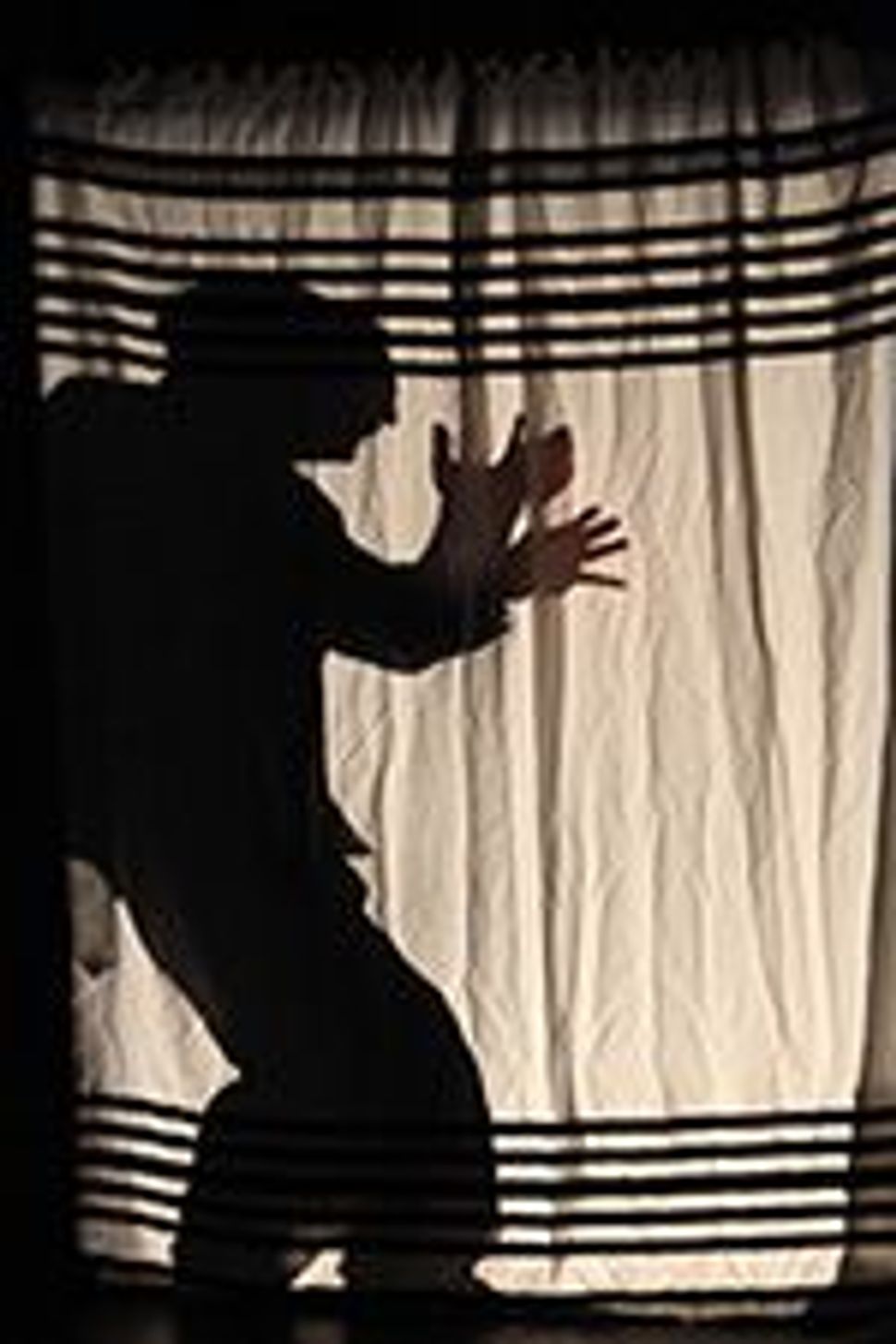 Whence Comes This Wondrous Sound?: From Rafael Goldwaser and his lights (above) and his shadows (below). Image by Michael Priest

Listen to a clip from “Di Tsvey Brider” (“The Two Brothers”) from “New Worlds: A Celebration of I.L. Peretz” produced by Folksbiene. From an original score by Dmitri Slepovitch, recorded with the musicians Dmitri Slepovitch, Matt Temkin, and the voices of Shane Baker and Mikhl Baran.

‘A melody lives and dies and it is forgotten,” actor Rafael Goldwaser says early on in a presentation of “A Gilgl fun a Nign” (“The Metamorphosis of a Melody”). “But a melody can be resurrected.”

Goldwaser, who was born in Argentina and spent time in Israel, now lives in France, where he actively promotes an explicitly Yiddish performance style. Somewhere along the way, he came across “A Gilgl fun a Nign,” a short story by the great Yiddish writer I.L. Peretz, and decided to turn it into a monologue. The word gilgl is shorthand for the kabbalistic notion of “gilgl neshamot,” or “the transmigration of souls,” and Peretz’s story explores music’s spiritual nature and capacity to be reincarnated in various forms. In an interview with The New York Jewish Week, Goldwaser further explained that this idea of the transformation of a melody ultimately sprang from the teachings of Rabbi Nachman of Bratslav, concerning the use of both sound and silence to communicate with God. 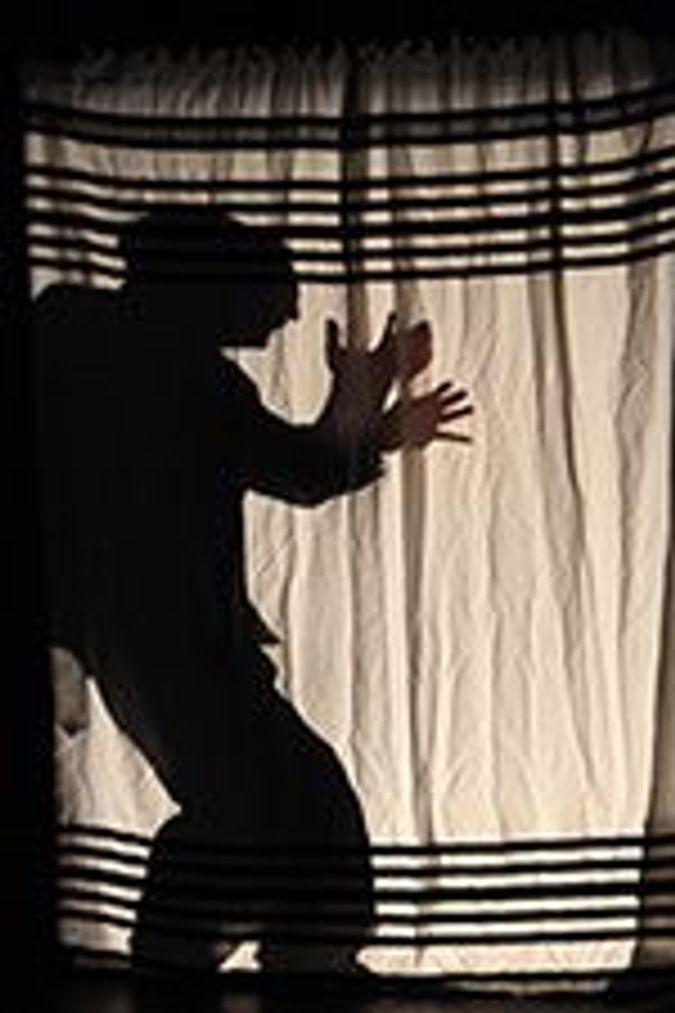 I’m in no position to judge whether Goldwaser’s one-man show, which was recently presented by the National Yiddish Theater — Folksbiene as part of a program celebrating Peretz’s work, accurately reflects Nachman’s views. But I can say with some certainty that it does accurately depict how Jewish music — how any music, for that matter — changes shape as it is carried along by cultural drift and the vicissitudes of human history.

“A Gilgl fun a Nign” tells a twisted tale of musical migration. A violinist by the name of Reb Chaim is hired to play at a wedding, on the condition that he commission and perform a new piece — a requiem — by the composer Pedhotser. Unable to meet Pedhotser in person, he resorts instead to stealing one of the composer’s freylekhs, which he hears by chance in the street, and turns that joyous wedding dance into a mournful dirge.

Reconfigured as a maniacal dance by the groom’s drunken family, the melody then finds its way into the Yiddish theater in Warsaw, where it is reborn as light opera. The next time we hear Reb Chaim’s piece (or is it Pedhotser’s?), it has become an organ grinder’s tune, cranked out by a trio of Warsaw street performers. One of them, a girl who was abducted from her parents and is soon stricken by typhoid, eventually adopts it as a blind beggar’s lament. In that form, the melody finds its way into the ear of a Torah scholar whose master, Reb Dovid, now deems it to be filled with “the essence of Torah and Shabbos holiness.”

And the mournful beggar girl? She turns out to have been the daughter of the couple at whose wedding Reb Chaim first played his requiem. In a final twist, the girl’s father brings the tune with him to America, where it is recast as a bouncy swing-era ditty that is scatted over jazz-band accompaniment.

The remarkable thing about this story is not how absurdly and unbelievably convoluted it seems, but how accurately it reflects the circuitous routes along which music actually travels, and the ease with which a tune can shed its skin. It’s tempting to accuse Goldwaser of exaggerating the situation for dramatic effect, but he has done no such thing. Real-world versions of Reb Chaim’s melody (or Reb Dovid’s freylekh, as it is first described in the play) abound.

Consider a staple of the modern klezmer repertiore: “Misirlou” (“Egyptian Girl”), whose history is every bit as confusing as that of Reb Chaim’s tune. “Misirlou” probably originated somewhere in Asia Minor (both the Greeks and the Turks claim it as their own) before migrating north along the musical pipeline that wandering Jewish and Roma musicians established between the Black Sea and Eastern Europe. It turned up in the United States in the 1920s, and eventually became a surf-rock classic at the hands of guitarist Dick Dale, who heard it played on the oud at the home of his Lebanese grandparents. A half-century later, the melody continues to get around; if you’re still not sure you’ve heard it, think of the instrumental theme song to Quentin Tarantino’s “Pulp Fiction.” Or the Black Eyed Peas’ song “Pump It.”

“Misirlou” entered the ambit of klezmer only in the late 1940s, though musicologist and filmmaker Harry Smith recorded Naftali Zvi Margolies Abulafia, an Orthodox rabbi, singing it on Manhattan’s Lower East Side in the 1950s. Lord only knows where the good rabbi heard it.

What we actually know of “Misirlou” and countless other pieces like it still represents but a fraction of their full histories. That’s especially true of tunes that passed at some point through the hands of people who had neither the inclination nor the resources to document their work, or whose records were lost or destroyed long ago — a serious problem for those who seek to trace the origins and subsequent peregrinations of the music of Eastern European Jews.

The Folksbiene offered up “A Gilgl fun a Nign” along with another Peretz-inspired piece, “Di Tsvey Brider” (“The Two Brothers”), a kind of Jewish Grimm fairy tale in which one sibling is tempted by a devious serpent into torturing another for personal gain. The performance’s creepy “Tales From the Crypt” vibe gained much from the atmospheric score provided by Dmitri Slepovitch, Belarusian musician and ethnomusicologist, who played some of his region’s distinctive Jewish music during the intermission. Slepovitch is a terrific clarinetist and a genuine ham; despite having to play over recorded accompaniment from a tinny boom box, he still held the audience’s attention, bugging out his eyes and raising his clarinet like a fire hose as he trilled away in a style quite different from the klezmer we most often hear in North America.

Yet still I wondered: How much can anyone, including Slepovitch himself — a man who has done extensive fieldwork in Belarus — really know about what he called “the traditional klezmer music” of that area in his spoken introduction? Most of the Jewish genres and styles we hear today do not represent continuous, intact traditions; interrupted by wars and other calamities, weakened by migration and assimilation, they have instead splintered and been preserved only sketchily on recordings and in the memories of those aging few who once played or heard them. If they seem vibrant and vital and whole, that is only because individual musicians and scholars have expended great effort to renew and reconstruct them. But if we are to be completely honest, we must admit that we have only the sketchiest understanding of where they came from, how they developed over time and what they sounded like throughout most of their (largely unrecorded) history. Under such circumstances, historical continuity is an illusion, and authenticity a chimera.

In that sense, “The Metamorphosis of the Melody” might indeed go too far, but only insofar as it implies a known starting point that often simply does not exist. For the most part, we can know only what the object in question has become; what it once was, we can but guess.

Alexander Gelfand is a freelance writer whose work has appeared in The New York Times, The Economist and (his favorite) Bartender Magazine.