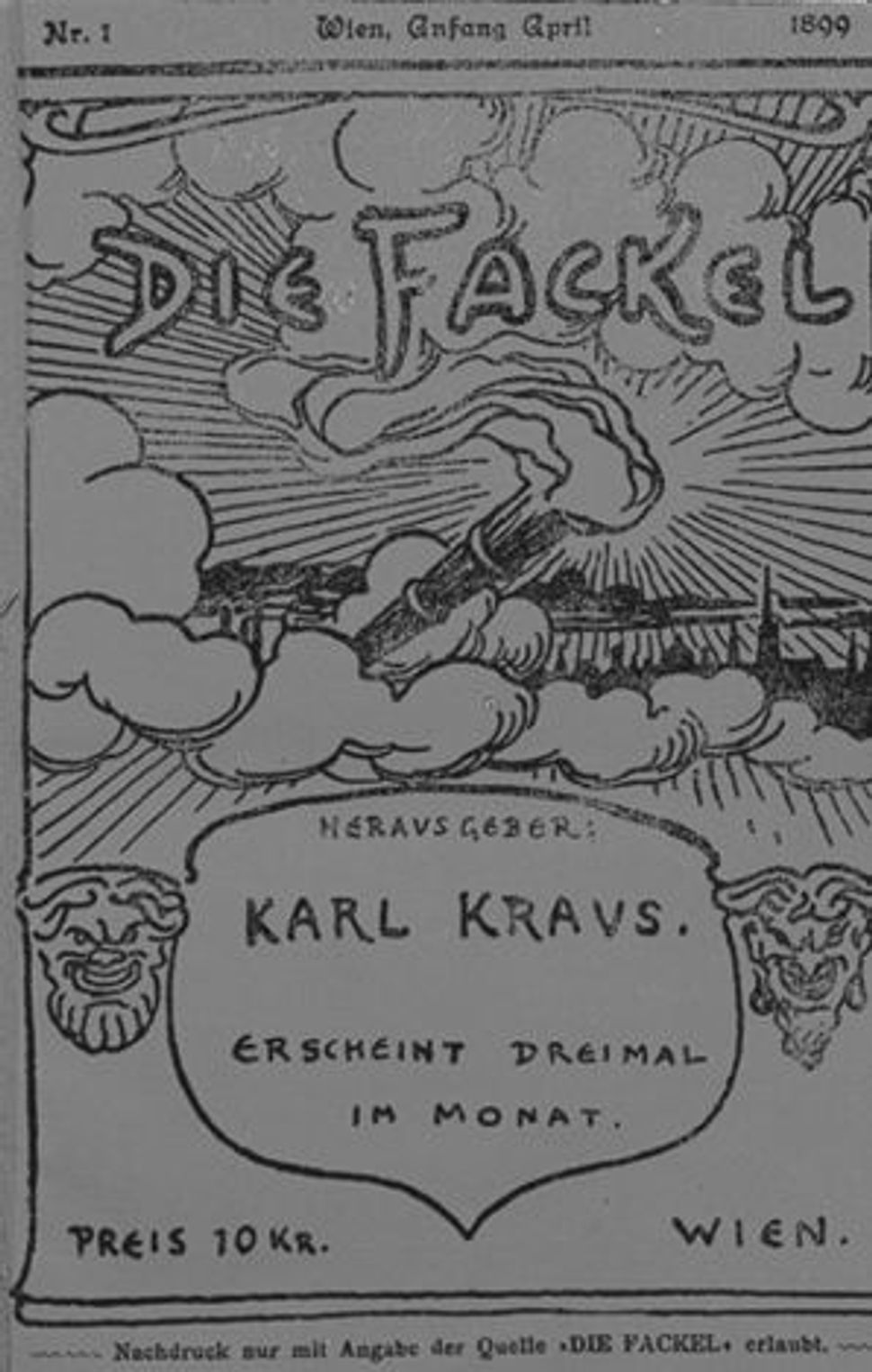 The Anti-Journalist: Karl Kraus and Jewish Self-Fashioning in Fin-de-Siècle Europe 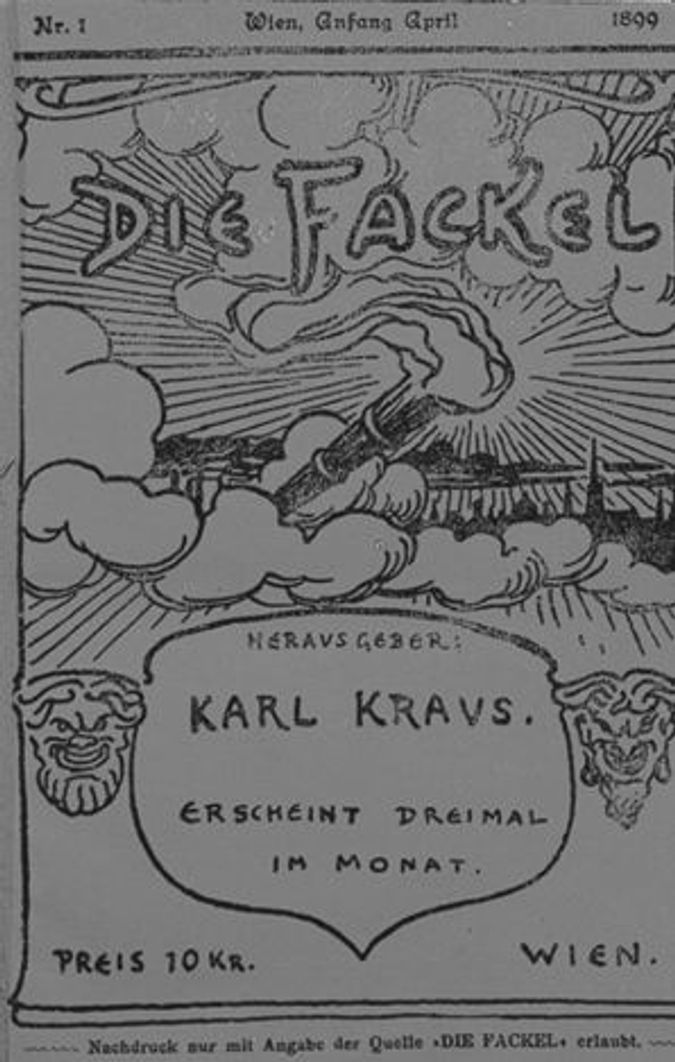 Modern journalism, especially as practiced in America, utilizes what is perhaps the most stifling literary form ever conceived outside of metric poetry. In our daily papers we have reduced our attempts at instantaneous history to the rubric of “news,” with a set style and paragraph order. Those of our pages that don’t adhere to these guidelines are either culturally marginal or celebrity tabloids. I am mentioning this only to delay beginning an essay about Karl Kraus.

Kraus was born in 1874 in Austro-Hungarian Gitschin, now Jicˇín in the Czech Republic. It should be ironic that his father was a successful manufacturer of paper. Vienna 1899 was the decisive dateline: In that year, Kraus renounced Judaism and began Die Fackel, The Torch, which published whenever he pleased, even daily. After 1911, and up until the end of his life in 1936 amid fascism’s rise, he wrote most of this publication himself. Before Nazism became news, newly broadcast over the radio and on newsreels, Die Fackel’s intertextuality would preview that of the Internet; formed on the informal, referential feuilleton style of Heinrich Heine, Kraus’s literary editorializing could be considered — but isn’t, in any cyber history I’ve read — the first blog.

With the regrettable exception of Hitler’s mature years, there was no German-language phenomenon that did not occasion Kraus’s print comment: He inveighed against the Neue Freie Presse, Vienna’s petit-bourgeois paper of record; the ideal of pan-Germany; the Habsburg Monarchy, and, especially, the new Jewish science that was psychoanalysis: Kraus found exceptional hilarity in Freud’s account of Vienna’s fantasies of violence and sex, which frolicked after the populace was safely in bed, and the Realism of the newspaper’s day sound asleep.

For as long as he would allow them, Kraus’s contributors’ lists read like a canon; we read and listen to and look at the art of these people today, and will always. Consumed in cafés between immense quaffs of coffee, Kraus’s own writings served as sustenance to these artists and arts, Die Fackel’s pages like tables around which inquiring Vienna met in a virtual klatsch. His were the texts every German-speaking luminary read over daily, weekly, monthly, before going off to write their own imaginative lives: Kraus administered to them and less-famous others regular doses of the mundanely political, in a sense providing them with a common reality to be abjured, or manipulated, in the subsequent creations of their art.

Besides the Jew, there is no greater hater of the self than the journalist, whose work is labored over intensely, then printed on sheets that quickly disintegrate. The Jew has internalized the hatred of the centuries, and so continues to destroy himself by the example of others. The journalist must perish, too, but he must publish first; it is a wonder that he should care about his words, or his style, at all. The Kraus Problem is exactly that. Karl Kraus isn’t read today because Viennese newspapers aren’t read. Forget journalism, though, today’s journalists might themselves be wrapping herring and flowers tomorrow. When was the last time you, over Sunday brunch, spread out the paper from June 28, 1914? Better, can you name the current editor in chief of this newspaper, or of The New York Times?

To understand the specificity or minor mimetic nature of Kraus’s Die Fackel, we should first have our obituaries for his peers: Kafka is still read because his horror at the anonymity created by modern bureaucracy is ours, too; Benjamin was a mystical Marxist, and we share his political yearning today more than ever — namely for a messianic redemption from history’s slough; we still listen to Arnold Schoenberg and to his mentor, Gustav Mahler, as their music enacted the passage of Romanticism into dissonance or kitsch, and marked the beginning of what we’ve called postmodernity to describe the styles of different eras and cultures co-existing and so, made conscious of both each other and themselves; Paul Klee’s paintings elucidated the spare landscapes of a technological, or dehumanized, future, while George Grosz and Otto Dix appropriated the ravages of war to update the grotesque. The creations of this bunch were metaphorically concerned: Their work had to mean more than just words and tones and colors; relevant politics were to be extrapolated by means of analogy, or the narrative dramatization of the abstract. Instead of writing about the ways in which technology impacted his life with the inventions of the telephone and automobile, Kafka preferred to write “In the Penal Colony”; instead of gathering reportage about the empire’s decline, Robert Musil wrote “The Man Without Qualities,” and Hermann Broch, “The Sleepwalkers” — two novels that could have been “based on real events” but were mostly invented.

The more distant the history, the more we care about art and the less we care about facts, which appear, with each passing year, excessive, or trivial. Though the contemporaneous travails of Captain Dreyfus are remembered, Kraus dedicated more ink to the Harden-Eulenburg Affair, in which a conservative Berlin journalist, Maximilian Harden (born as the Jew Felix Witkowski), publicly outed the homosexual Prince Philipp Friedrich Alexander of Eulenburg-Hertefeld. This revelation, and its accompanying libel trials and courts-martial, scandalized the Cabinet of Kaiser Wilhelm II, to say nothing of the newspaper world, which would discover, amid the waning influence of official censorship, the circulation possibilities inherent in sensationalism. Unlike the Moderns who read him, then, Kraus could only have limited patience for metaphor; his subject was not as much the plight of man in the universe as the plight of Prince Philipp, and the laughable vice laws, or Sittlichkeitsgesetz, of fin-de-siècle Vienna — a time and place to be resurrected in translation not as vital news, but as a form of pietistic history, or thanatopsical pornography.

This book, “The Anti-Journalist,” discusses Kraus’s Die Fackel career, and its many names and dates have been recounted before. Writing about Kraus is enjoyable because the writer’s best paradoxical prose can come out of the drawer: Paul Reitter, associate professor of German at Ohio State University, gets to write in favor of a man who would have dismissed any encomium, and then against a man who would have only been proud of such scorn, despite it coming, as it always came, from a writer so grossly inferior. What we should want, instead of this study or further biography, is an edited reader of Die Fackel — a Best Of or Selected Writings, for those without command of German (and Kraus’s German is difficult; punningly particularistic and encrypted with slang).

The Jewish Question that breathes throughout this book, but is never asked outright, is this: Why have so many Jews been journalists? Or, why are so many journalists Jews? The answer, aside from typical hagiographies about Jews being a lettered people, is that Jews have always stood at a remove from their host cultures. With the Enlightenment and later the legal emancipation of Jews freeing them to practice a range of professions, their explanation of host culture to themselves and their own communities would expand, logically, to become the explanation of host culture to that culture itself. Such independent explanation is called, once professionalized with guidelines and miserly salary, “journalism.” Being forced to stand independent by reason of birth has become, in America, the choice to stand independent, and so we have guaranteed ourselves both a free press and the freedom to profess any religion. But a Jew who renounces Judaism is still a Jew, and he can be likened only to a journalist skeptical of the very fact of his own existence. A Jew who was not a Jew, a journalist and “anti-journalist” both, the only thing that can be said about Karl Kraus is that he was Karl Kraus. But even that is unsure. He would not have agreed. He would not have given us the pleasure.