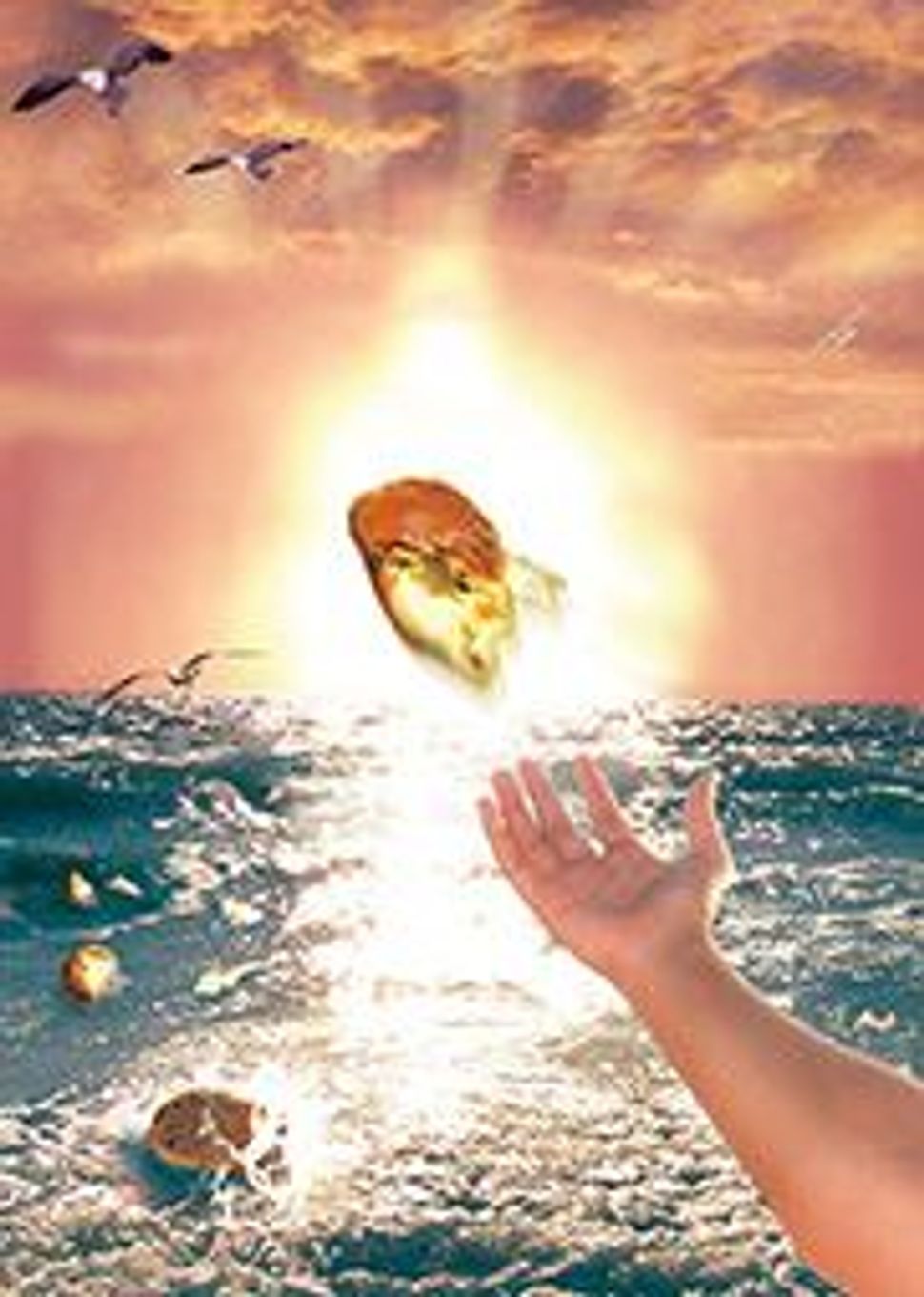 Not Living By Bread Alone: Teach a man to fish and he?ll eat forever. Image by Carvin Knowle

In a November issue of The Boston Globe, language columnist Jan Freeman, taking advantage of the approaching 400th anniversary of the King James Version of the Bible (the KJV first appeared in 1611), wrote about the many biblical expressions there that have become fully naturalized English idioms. Some of these, she observed, we use regularly, despite the fact that they make no apparent sense. One is the “mysterious” (as she puts it) turn of phrase “to cast one’s bread upon the waters.” 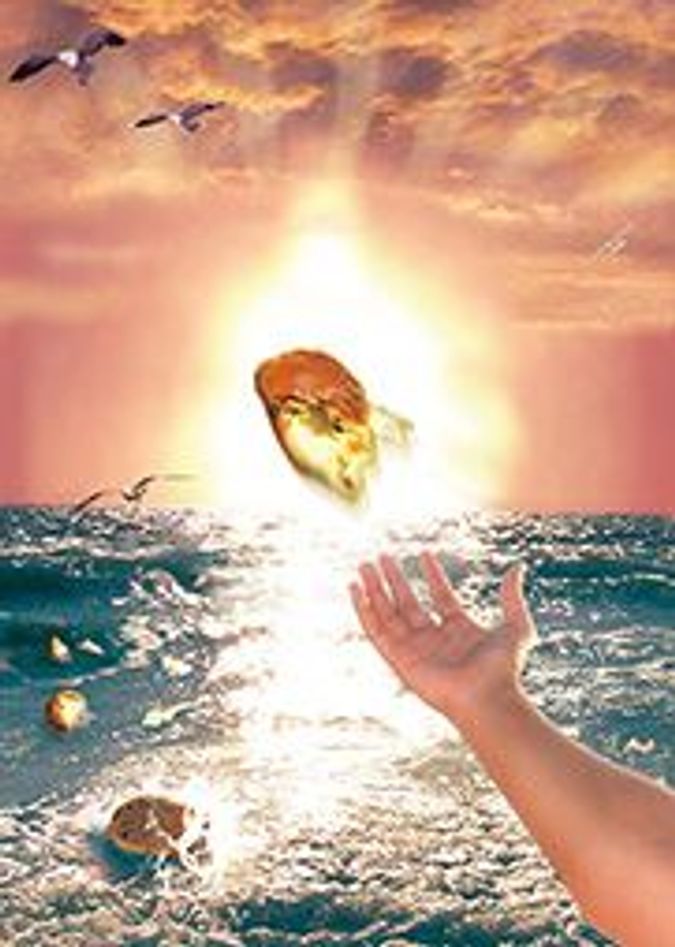 Not Living By Bread Alone: Teach a man to fish and he?ll eat forever. Image by Carvin Knowle

I once thought this mysterious, too. Shalaḥ laḥmekha al-p’ney ha-mayim, ki v’rov yamim timtsa’enu, says the Hebrew verse that begins the 11th chapter of the book of Kohelet, better known in English as Ecclesiastes. The King James translates this as, “Cast thy bread upon the waters, for thou shalt find it after many days,” which indeed seems hard to fathom. True, we all know what the verse is supposed to mean. To cast one’s bread upon the waters is to do something that, despite its uncertain chances of success, is worth doing because there’s little to lose. If, for instance, you see an ad for a good job in the employment section of the newspaper, one that you know will be answered by 1,000 people, you are casting your bread upon the waters by being the thousandth-and-first. Although your prospects of getting the job may be all but nil, you’re risking nothing by applying.

And yet why should “Cast thy bread upon the waters” mean this? After all, a slice of bread tossed into a pond, lake or river soon becomes waterlogged, and then sinks and disappears, with no chance of being found again, much less “after many days.” And why would anyone toss it there in the first place? What could the author of Ecclesiastes, reputed by Jewish tradition to have been that wisest of men, King Solomon, have been thinking of?

Biblical commentators have struggled with this question ever since biblical commentary began. The oldest gloss on Ecclesiastes 1:11 that we have is in the homiletic compendium known as Midrash Kohelet, which was probably composed between the sixth and eighth centuries. In it are various attempts to explain the verse, all based on the idea that it alludes to the unexpected rewards of giving charity. Thus, one story in Midrash Kohelet tells of a rabbi who, miraculously saved from a shipwreck, is asked to explain his good fortune. “As I was boarding the ship,” he replies, “I met a poor beggar. ‘Earn yourself a good deed,’ he said to me, and so I gave him some bread. ‘Just as you have restored my life to me,’ he said, ‘so may your life be restored to you’ — and [when this happened] I thought of the verse, ‘Cast thy bread upon the waters.’”

Medieval Jewish commentators followed in the wake of this. The most authoritative of them, Rashi, interprets the verse to mean that if one performs an act of kindness with no more hope of a reward than one might expect to get from throwing bread into water, one will eventually be recompensed. My 25-volume Hebrew Ensiklopedyat Olam ha-Tanakh (“Encyclopedia of the World of the Bible”), which brings to bear on Scripture all the tools of modern scholarship, cites as a similar statement an ancient Egyptian proverb that says, “Do a good deed and throw it into the river; when it [the river] dries up, you shall find it.” Alternately, the encyclopedia proposes that Kohelet may be advising the reader to engage in naval commerce. Send your goods forth on the sea, our verse counsels, and you will eventually harvest the fruit of your investment.

I must say that none of this has ever struck me as very convincing. And then one day, as I was reading Ecclesiastes, I suddenly had a childhood memory. On summer vacations spent in bungalow colonies in the Catskills, we boys liked to go fishing in nearby ponds, using homemade rods constructed from a branch, some string and a hook. For our bait we usually dug for worms, but sometimes, if we were too lazy, or if no worms were to be found, we took pieces of bread, rolled them between our palms into hard little balls and used them instead. Even though these bread balls soon sank, they stayed on the hook for a long while, and the fish sometimes went for them. If you waited long enough, you sometimes actually caught something.

Can this be what “Cast thy bread upon the waters” refers to? The more I consider it, the more I feel certain that it is. Bread has always been a bait of last resort, and fishermen have always fished with it when nothing else was available. Indeed, this now seems to me so obviously the meaning of Ecclesiastes 11:1 that I’m amazed that no one else seems to have thought of it.

But no, that’s not so. The 12th-century biblical commentator Abraham Ibn Ezra, I now see, wrote about the verse that it “cautions the haves to be generous both with those who show gratitude and those who don’t — and though some say that the water [in the verse] refers to fishponds, there is no need for such an explanation.”

I’d say there is every need. It’s the only one that makes sense.