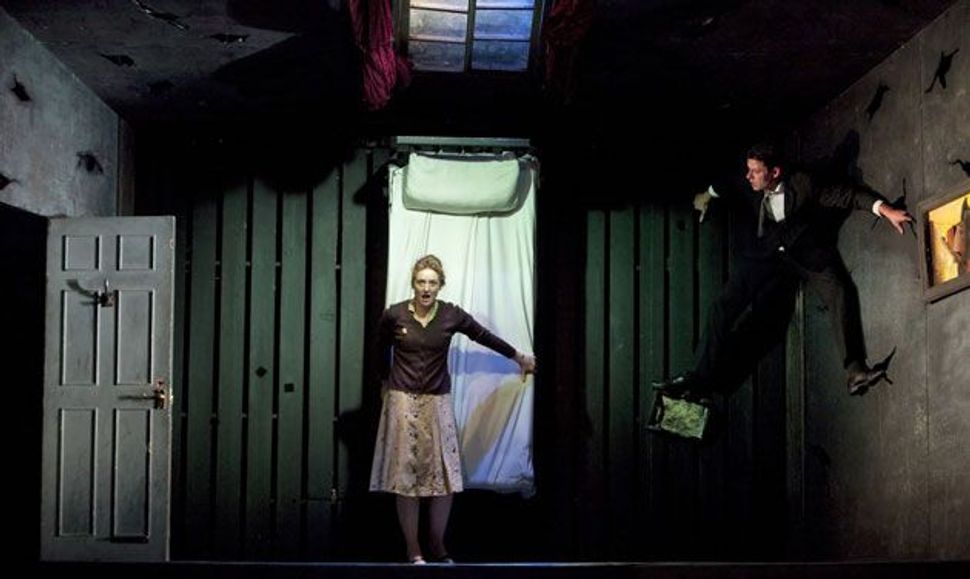 Disturbing Perspectives: Gisli Orn Gardarsson (director and actor, right) has got the cast, and audience, climbing the walls. Image by Richard Termine

“Metamorphosis,” the new play that was recently on view at the Brooklyn Academy of Music as part of BAM’s annual Next Wave Festival, belongs to a particularly well-armed strain of contemporary theater. Self-consciously serious, these shows more often than not originate in countries that have deep wells of arts funding, and so they tour for years on the international festival circuit, accumulating, along the way, the cultural clout to justify their pretensions. They can be, in turn, exhilarating or tedious, and in either case they’re often impervious to criticism, inscrutable except on their own narrow terms. When they succeed, it’s usually because they’ve mixed in enough flashpoints from the land of cool to become must-see events for the cognoscenti.

Thus, this “Metamorphosis.” Based on the Franz Kafka novella. Created by the wunderkind Gisli Orn Gardarsson, who (along with his Europe Award-winning theater company, Vesturport) hails from Iceland, and David Farr of Britain’s renowned Lyric Hammersmith. Music by Nick Cave. Kafka! Nick Cave! Iceland! BAM! How we’ve longed to see these elements together. It almost doesn’t matter if the play is any good, you’ll want to see it just to say you were there.

It comes as a great relief, and a great pleasure, to be able to say that this show is more than just a sum of its snobbery. Nearly every element of the production has been thought through, not just for its cool factor, not just for its theatrical potential, but also for how it might illustrate and elaborate on the narrative implications of Kafka’s story.

“The Metamorphosis” is, of course, the tale of Gregor Samsa, a melancholy salesman who famously awakens one day to discover he has turned into a gigantic bug (literally “vermin,” but the image of the bug has overwhelmed all others). He tries, throughout the story, to please and serve his family in whatever way he still can, but manages only to antagonize them, terrify them, appall them and frustrate their every attempt to fulfill their bourgeois aspirations. It’s a simple conceit that plays itself out around a gargantuan symbol. In Kafka’s hands, the story unravels as an elaborate, not-quite-acknowledged joke, cosmically black humor trapped in the confines of a proper, if shabby, domestic reality: the alienated Jew trapped in a Christian family. It works its magic by situating, at all times, our sympathies with the bug; we’re as riveted by the bug’s intellectual predicament as we are by its physical one.

The problem, for the theatrical director, is how to keep those sympathies in the right place. Theater is an art of outward appearances. Kafka’s psychological portraiture can be approached only by proxy. The metaphor must be rendered visible, less through Gregor’s transformation than through his context and the family’s reactions, to ensure that the audience is engaged by more than just the absurd spectacle of the bug itself.

The solution Gardarsson and Farr come up with is to simply do away with the bug. For a brief moment, when Gregor first appears, we see a buglike silhouette framed inside a bed, but as the lights rise on Gregor in his room, we discover that this is a thin, pasty man in an ill-fitting suit. Yes, he spends much of the play crawling on the floor, or the wall, or the ceiling, or the table, but Gardarsson, who not only directs the show but also plays Gregor, limits his zoomorphic gestures to awkward cocks of the arm and juts of the leg. He comes across as a sad, sensitive, disturbed person. Not a bug at all. It’s just everyone else who treats him like a bug. We’re inside Gregor’s head, seeing the world through his eyes. He’s still the same person he was before, it’s just that everyone else now suddenly treats him differently. The weight of the drama has been shifted from Gregor’s transformation to his family’s perception of him.

Gregor’s fretful mother, Lucy (Kelly Hunter), and muddled, prideful father, Herman (Ingvar E. Sigurdsson), along with Gregor’s sister, Greta (Nina Dogg Filippusdottir) — who has to choose between her love for her brother and her social aspirations — become more than just foils for Gregor’s pain. They become cruel executors of that pain. In place of compassion for Gregor, they project their fears onto him. When Herman beats Gregor with a sack of apples, his reasons seem to rise less from Gregor having turned into a monster than from his own rage at his failure and his disgust at Gregor for no longer acting like a good wage-earning citizen. Gregor is no longer symbolic of the social outsider, he simply is that social outsider. And in place of the symbolic effects of Kafka’s original story, we have irrational action — absurdity.

In this “Metamorphosis,” it’s not just Gregor who’s odd; everyone else is, too. When the family strips Gregor’s room of its furnishings, leaving him with nothing but a bedpan, they come across as being as crazy as he is. Greta, who is the last to turn on him, visits Gregor often, bringing him food and fretting about what’s happened to him. Gregor pleads with her; he attempts to console her, to play the protective brotherly role, but the more he speaks, the more distraught she becomes, yelling and yelping about the chirping screech of his voice. “All I hear is noise,” she shouts. “All I hear is noise!” The scene is jarring because of the disjuncture between our experience of Gregor’s actions and Greta’s response. We in the audience understand what he’s saying. He comes across as a kind, if overly jittery, guy who loves his sister. And Greta’s hysterical response to him seems to be a non sequitur born of her own psychopathology rather than of his metamorphosis.

It’s as though Gardarsson and Farr set out to use Eugene Ionesco’s tactics to tell Kafka’s story. Everything means something, but that meaning remains constantly in flux. The set itself is fraught with metaphoric implications. Gregor’s room on the upper level is tilted on its side: The bed is mounted on the wall, and we in the audience look down into it — except when the other family members enter it, walking on the wall (which is of course literally the floor) and engaging with the space as though they’re standing in a prism. Deep gashes have been cut into its walls, as though someone’s gone at them with a machete. The ground floor, drab and conventional, looks like every other realist set you’ve seen: the wallpaper, the dining room table, the staircase. It houses the family proper. Two competing and incompatible stage worlds thrust up against each other, disconcertingly. Even Cave’s music — heavy on the violins, at times dirgelike, at times buoyant — is fraught with symbolic meaning. More than a soundtrack, it’s incorporated into the action. The actors often move in sync with the beat, and this adds a further abstracting element to the action: more absurdity; a presentational, almost ritualistic formality.

This spreading around of metaphoric possibilities allows the directors to explore a variety of thematic elements in the story. The hollow strictures of bourgeois society, its inability to accommodate difference, the difficulty of individuality, the causes and effects of psychological disturbance, the role of the Jew in a Christian society. The play might be about any or all of these notions and it gestures at times toward all of them. If it strays from a literal recreation of the Kafka original, it does so in order to find a stage language that stays true to Kafka’s vision.

Joshua Furst, a frequent contributor to the Forward, is the author of the novel “The Sabotage Café” (Knopf, 2007) and the collection of stories “Short People” (Vintage, 2004).