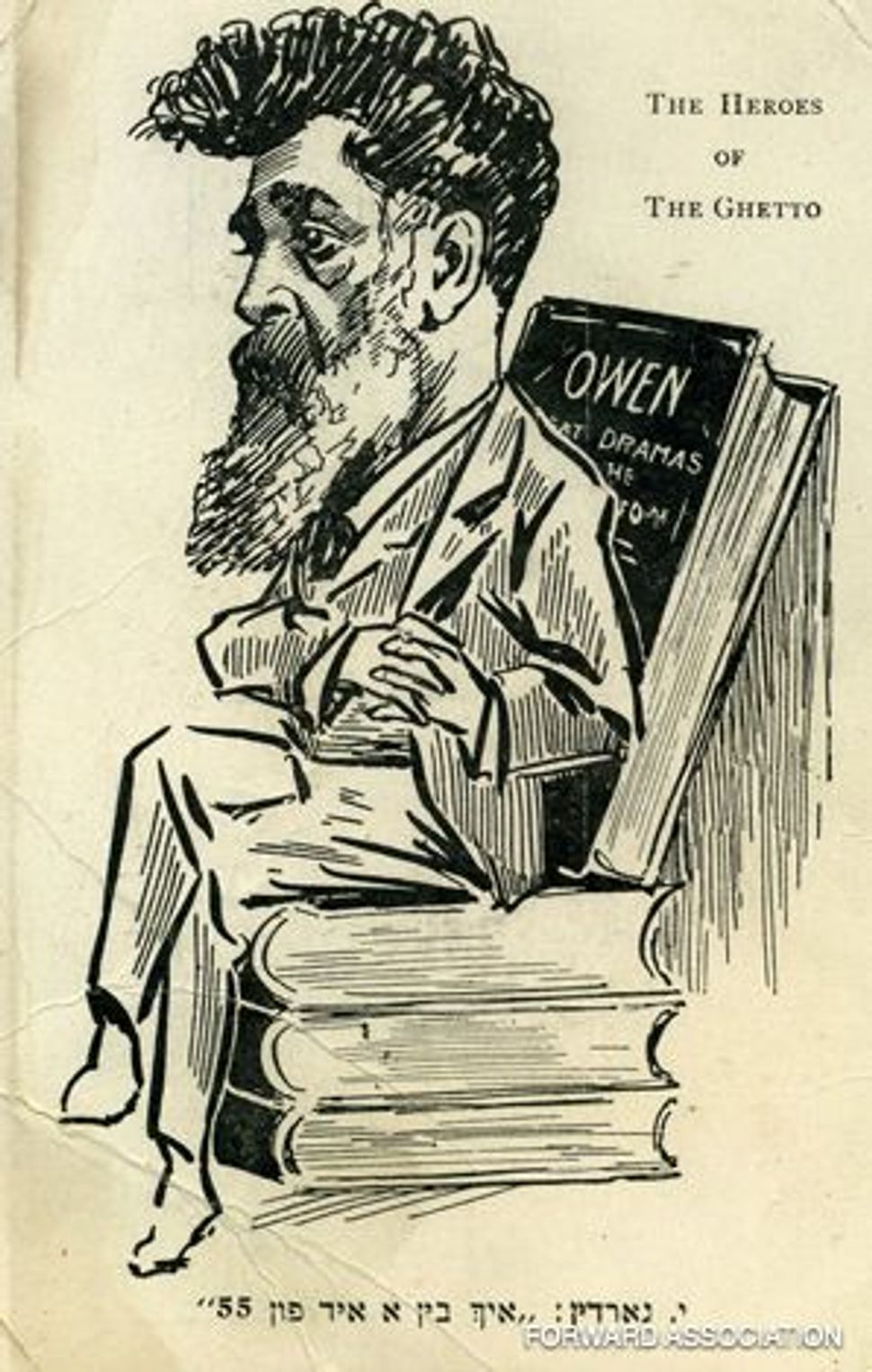 Finding the Jewish Shakespeare: The Life and Legacy of Jacob Gordin 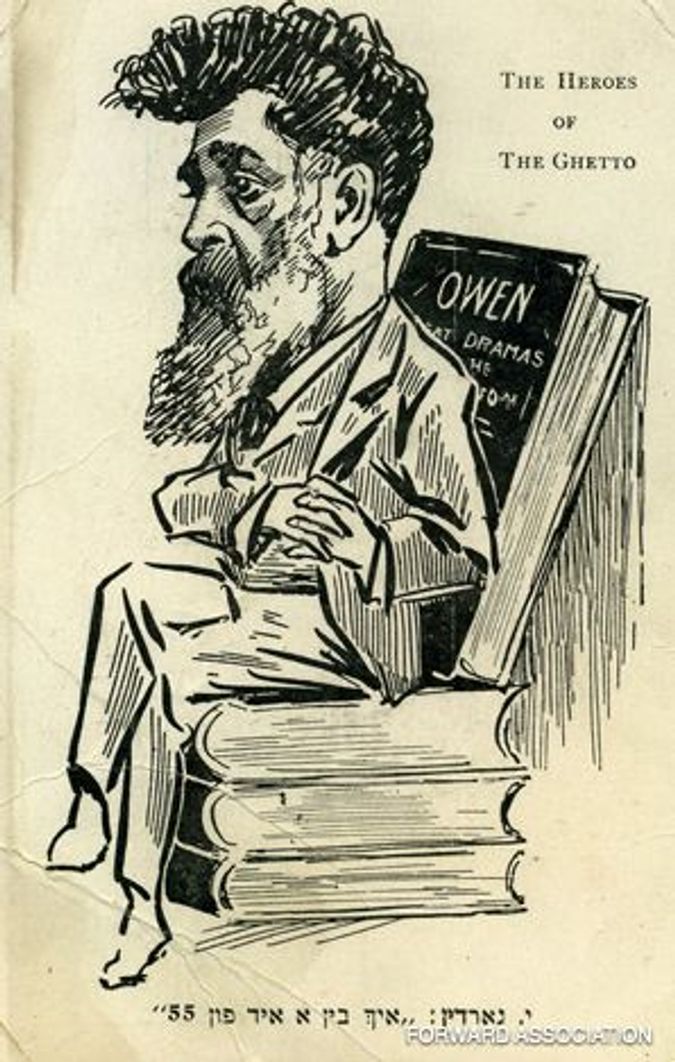 In the body of lore surrounding the Yiddish stage, a historical narrative jam-packed with legends, Yiddish theater impresario Jacob Gordin looms large. The man towered over most of his contemporaries, many of whom wrote admiringly of his trim, imposing physique; thick, dark, curly hair; majestic beard, and piercing brown eyes. A walking stick helped complete the picture.

Gordin also carried a metaphorical big stick, with which he famously assaulted theatrical conventions. In his 1893 sketch “Yokl the Opera Maker,” Gordin has a theater director boast hyperbolically of cobbling together “a scene from here, an act from there, two acts stolen from an old operetta, an epilogue out of a French melodrama, a prologue from Barnum and Bailey’s circus with jokes for the comedian, and there you have it, brother — a new, successful historical opera!” In place of such frivolity, Gordin sought to inject Yiddish drama with the spirit of the best of contemporary drama, particularly from socially conscious writers like the German Gerhart Hauptmann, the Norwegian Henrik Ibsen and Russia’s Maxim Gorky.

Factually dubious accounts of various episodes in Yiddish theatrical history have a way of being recycled so frequently that they calcify into “truthiness,” and the Gordin story is no exception. Truisms that turn out to be either inaccurate at worst or oversimplified at best include the story that he escaped Russia just before the tsarist police could arrest him (theater historian Barbara Henry has found, to the contrary, that they were only too happy for him to leave), and the myth of his single-minded reform of Yiddish drama and theater. Gordin himself promoted the latter myth, but he was by no means the first playwright seeking to raise the tone of Yiddish drama. And besides, he knew where his bread was buttered — that is, with more of it slathered on popular theater than on serious dramas addressing social issues. So when he needed additional income to support his large family, he would do what any self-respecting Yiddish writer would do: write under a pseudonym. Hence the exotically named “Dr. Jacoby From London,” and plays like “The Philistines” and “Mohammed and the Jews of Arabia.”

Gaps in the Gordin story cannot be attributed to lack of attention. He is the subject of two book-length biographies in Yiddish, plus numerous articles, book chapters, reviews, and so on. Still, as familiar as the Gordin story may be to a small circle of devotees, lacunae and misinformation still abound. Happily, two recent books help fill some of those gaps, and complicate the portrait of the Gordin that at least a few people think they know. In “Finding the Jewish Shakespeare,” Beth Kaplan, the playwright’s great-granddaughter, makes effective use of her family connection to shed light on both Gordin the man and Gordin the myth. Kaplan reinforces the picture that has been painted elsewhere of a serious and often stern figure with lofty ambitions. But though she has no difficulty probing her ancestor’s failings — including his tendency to give his time and energy to virtually everyone but his own family — Kaplan shows him displaying boundless generosity, both material and spiritual, and largely living up to the exacting standards he articulated in his plays and essays.

An early work that helped set the tone both for Gordin’s career and for a wide swath of later Yiddish drama was “The Jewish King Lear” (1892), which recast the Lear story in contemporary Vilna, starting with a prominent Jewish businessman named Dovid Moysheles dividing up his estate among his three daughters and setting out to live the end of his life in Palestine. Like Shakespeare’s king, Dovid exhibits moral blindness toward his daughters, mistaking the two elder daughters’ sycophancy for love and the youngest daughter’s independence of mind for betrayal. And like Shakespeare’s Gloucester, Dovid goes blind — not from violence but from glaucoma, which we are led to believe can be cured with a simple operation, to be carried out by none other than the youngest daughter and her husband, who reconcile with Dovid and the other siblings at the end.

Gordin’s first crack at the Lear story — his other one coming in the form of “Mirele Efros” (1898), also known as the “Jewish Queen Lear” — would become a sturdy vehicle for Jacob P. Adler, his star. Adler was one of several leading men and ladies for whom the playwright created plum roles, and who, in turn, helped make his reputation. Of Gordin’s dozen or so best-known plays, it also may be among the hardest to translate, not because the language is particularly complex, but because the tone can so easily either descend into bathos or trip over the two-dimensionality (intentional, I believe) of most of the characters.

Despite this challenge, the second full-length Gordin play ever to be published in English (the other being “God, Man, and Devil,” ably translated by Nahma Sandrow) is none other than “The Jewish King Lear,” translated and with generous helpings of commentary by Ruth Gay and her daughter, Sophie Glazer. The book is unusual for more reasons than its addition to the English-language Gordin bookshelf. For one, Gay and Glazer offer not just an introduction and notes, but four essays that contextualize the play from various angles, including Gordin’s life and the broader theatrical scene, and offer Glazer’s astute close reading of the play.

One other choice Gay makes as the book’s editor raises important questions, only beginning to be explored by scholars, of the complicated relationship between the publication and performance of Yiddish drama. For various reasons, the published texts of Yiddish plays are often notoriously unreliable as representatives of the words that were actually spoken onstage when those plays were first performed. The one published edition of “The Jewish King Lear” diverges sharply from various unpublished versions that have been preserved in archives, but Gay deliberately chose to work from a manuscript that she plausibly argues represents Gordin’s intent for the work before it made its way to Adler, who then made dramatic changes in the text that would be enshrined in the play’s performance tradition, and thus the collective memory of the Yiddish audience.

That audience is no longer with us, but much remains to be said about the plays and playwrights who not only kept Yiddish theatergoers entertained but also helped shape the way they see the world. Now, nearly a century after his death, we are given new tools to help us understand Jacob Gordin and one of the plays that helped shape a repertoire.

Joel Berkowitz is chair of the Judaic studies department of the University at Albany. His books include “Shakespeare on the American Yiddish Stage” (University of Iowa Press, 2002).