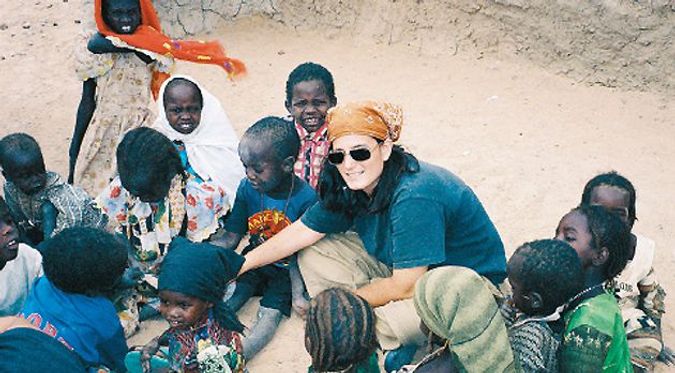 In the past year, provocative, stylized documentaries like “Catfish” and “I’m Still Here” enjoyed their 15 minutes of fame. For 2011, documentaries tackling social justice issues — such as “Waiting for Superman,” “The Tillman Story” and “Inside Job” — have won over the audiences and critics at theaters and film festivals and are garnering nominations for this year’s Producer’s Guild, Golden Globe and Oscar awards.

A remarkable number of the people responsible for these films happen to be Jewish. The extent to which their religion plays a role in their interest in filmmaking and social justice varies as much as the subjects and styles of their movies.

Jews creating accessible, meaningful art is neither a new trend nor a random coincidence, according to Caroline Libresco, a senior programmer at the Sundance Film Festival. In our interview, she said, “I don’t think it’s an accident that progressive Jews want to make a difference. Social change documentaries are an expression of tikkun olam.” Libresco has worked in documentary films for 15 years and is herself Jewish. She also said, “There has always been a strong wave of Jewish activist documentarians.”

Errol Morris, Barbara Kopple, Andrew Jarecki and Davis Guggenheim may not be household names the way Michael Moore and Morgan Spurlock are, but audiences know and love their films. “Fog of War: Eleven Lessons From the Life of Robert S. McNamara” offered profound insight into Lyndon Johnson’s (mis)handling of the Vietnam War. “Harlan County, U.S.A.” provided a window into the brutal exploitation of American miners. “Capturing the Friedmans” painted a complex portrait of how a close-knit, albeit dysfunctional, family dealt with criminal allegations. And “An Inconvenient Truth” proved that audiences will pay to hear about global warming. The fifth-highest grossing documentary of all time, it earned an estimated $49 million at the box office.

For some, documentary filmmaking is in their blood. Guggenheim’s late father, Charles Guggenheim — who won four Oscars for his films, including “Nine From Little Rock,” about the 1957 integration of Central High School — created the first political campaign ads for several Democrats, starting with Adlai Stevenson’s 1956 presidential bid; Davis would later do one for Barack Obama’s 2008 presidential campaign. Under her father’s tutelage, Davis’s sister Grace became a documentary film producer, and after his death, Grace finished the final of their 15 collaborations, “Berga: Soldiers of Another War.” The film told the story of her father’s fellow infantrymen who were captured during the Battle of the Bulge and sent to a Nazi slave labor camp, where, as prisoners of war, they perished.

Like Grace and Davis, Jessica Sanders — who directed “After Innocence,” which chronicles the travails and triumphs of several wrongfully convicted men who were later exonerated — grew up in a filmmaking household. Her parents, Terry Sanders and Freida Lee Mock, have directed and produced over 70 films, including the Oscar award-winner “Maya Lin: Return With Honor.” Sanders received her first Oscar nod for “Sing!” a documentary short that her mother directed and she produced.

Brothers Eugene and Andrew Jarecki are the first generation in their family to direct documentaries. Still, their mother was a film reviewer. The brothers have branched out into two distinct styles. Eugene’s “The Trials of Henry Kissinger,” a searing indictment of Kissinger, and “Why We Fight,” about the American military’s industrial complexes, intersperse archival footage and expert interviews, resulting in probing but earnest social commentary. Andrew, who made a mint off his start-up company, Moviefone, experimented with dramatic narrative in “Capturing the Friedmans.” He gave the family a camera and filmed them filming themselves, creating the effect that the Friedmans were exposing themselves. Andrew also produced the controversial “Catfish,” which is not surprising, given his penchant for color and drama. According to Andrew, the renowned “first father” of documentary film, Albert Maysles, who worked with his own brother, David, encouraged Andrew to shoot “Capturing the Friedmans.”

Alongside heavyweights who benefited from having a leg up, Libresco says there is also a contingency of politically active “rising filmmakers who are Jewish.” For many of these, social justice is their main connection to the religion. Take Ronit Avni, a filmmaker and activist whose most recent documentary, “Budrus,” sheds light on nonviolent protests spearheaded by Palestinians. Those Palestinians were then joined by dovish Israelis and Europeans. Avni personally identifies as Jewish, and said in our interview that, “I am a piece of that fabric, as are my values.” Those values are what inspired her to found the not-for-profit organization Just Vision, staff it with a diverse team of Muslims, Christians, Jews and atheists — mainly women — and produce documentaries about local Arab and Israeli change-makers. Avni added, “I felt a strong sense of responsibility to clean up my backyard which, after September 11 and the Second Intifada, was burning.”

Some American Jewish filmmakers cite a specific event, be it the civil rights movement or the Holocaust, as a catalyst for their commitment. The director of the documentary “Neshoba,” Micki Dickoff, recounts the profundity of having a father who grew up Jewish in the South. His was the only Jewish family in his Mississippi town. As a teenager, Dickoff devoted herself to the civil rights movement and recounted this experience in an interview over e-mail: “When I was 17 in 1964, I begged him to let me go to Mississippi for Freedom Summer to register black voters.” Her father didn’t let her go. Dickoff said that the sacrifices of those who struggled “inspired my politics and my art.” She added, “I feel part of the Jewish tradition of tikkun olam, the obligation to make the world a better place for everyone.”

The Holocaust also inspired many Jewish filmmakers to tackle social justice issues. Critically acclaimed director Joe Berlinger, whose film “Crude” follows a class-action lawsuit against Chevrolet during the “Amazon Chernobyl” scandal, says that his passion for covering social justice issues stemmed from watching movies, as a child, about the Holocaust. Once Berlinger saw the movie “Shoah” as well as newsreel footage of the liberation of the camps, he said in our interview, he became enthralled with the way the medium brought this tragedy to light. We spoke while Berlinger was on location, and he recalled that, “At an early age, I was exposed to films about the Holocaust and it had a deep impact on me in terms of social justice.”

The history of the Holocaust also propelled Rebecca Richman Cohen, a lawyer turned filmmaker, to document matters of social justice, as she did in the film, “Nuremberg Remembered.” Since then Cohen has been inspired to tackle another injustice, this time in Sierra Leone, in 2010’s, “War Don Don.” She said in our interview that, “I thought a lot about the Holocaust as a part of history, and how the atrocities of genocide were not unique just to the Jews.” Cohen says her interest in war crimes and genocide stems from learning about the Holocaust as a child, and now she hopes to demonstrate why it is critical to give even the most vicious criminals a fair trial.

Being Jewish can also come in handy. At a conference of Jewish activists — sponsored by Avodah and American Jewish World Services and titled “Inside the Activist’s Studio” — filmmaker Taylor Krauss recounted his surprise when the Rwandan genocide survivors he was filming for “Voices of Rwanda” trusted him more because of his religion. During the panel, Krauss recalled, “I was accepted by these survivors because I was a Jew. They thought I could understand their experience because of the Holocaust.” Krauss described his own interest in working with survivors of the genocide as an outcome of learning as a child about, what Krauss called, “Jews’ culture narrative around the Holocaust.”

Following Morris’s lead, these filmmakers tend to eschew the role of the “everyman” as embodied by Moore and Spurlock. Berlinger, for example, deliberately avoids using a narrator, as he says, “I don’t want to sway the audience one way or another.” He hopes the audience will come to the same conclusion, but, even if they don’t, his goal is to show as many sides of the story as possible.

These filmmakers’ commitment to social justice is palpable, as is the enjoyment of creating moving portraits, but they are divided about calling their profession a form of activism. Berlinger says, “Films can, hopefully, change the hearts and minds of people, but not the fundamental course of the issue.”

Others embrace the moniker of “activist.” In our interview, up-and-coming filmmaker Jen Marlowe described herself as, “primarily a human rights activist who uses directing and writing as some of my tools.” She chronicled the experiences of adults in war-torn Sudan in two acclaimed documentaries, “Darfur Diaries” and “Rebuilding Hope.” The latter had its television premiere this past November. Dickoff said, “It’s important to remember that activism is not propaganda but on the other hand, a documentary film is not a news report. I have a definite point of view, but I also take very seriously my obligation to present the truth as I see it. I have been using film as a tool for social justice for more than three decades. I cannot separate the artist from the activist.”

Activists or not, they all believe the key is the story. Filmmaker Rob Epstein — who with Jeffrey Friedman, did “The Life and Times of Harvey Milk” and “Howl” — explained, when we spoke over the telephone, that the story matters most. Epstein said that, “Ultimately the film must stand alone. The story has to draw you in.” Filmmaker Judith Helfand agrees and, in an e-mail to me, pointed out, “People respond to compelling stories, not issues. My mother and father didn’t read me a bed-time ‘issue.’”

These days, making movies can have an impact. Libresco recounts how the audience reacted to the documentary “A Small Act,” which had its debut at the 2010 Sundance Film Festival. The film tells the story of Kenyan Chris Mburu who tracks down a stranger, Hilde Back, a Jewish Holocaust survivor and nursery school teacher living in Sweden. Back had anonymously sponsored his elementary and secondary school education. Mburu went on to Harvard Law School, became a human rights activist for the United Nations and started his own scholarship program, called the Hilde Back Education Fund. At the film’s premiere, audience members spontaneously donated $80,000 to his foundation.

Anonymous giving is a great mitzvah in Judaism, and evidently, so is the documentary film.

Catie Lazarus is a frequent contributor to the Forward.