Look Out Broadway, Here They Come! 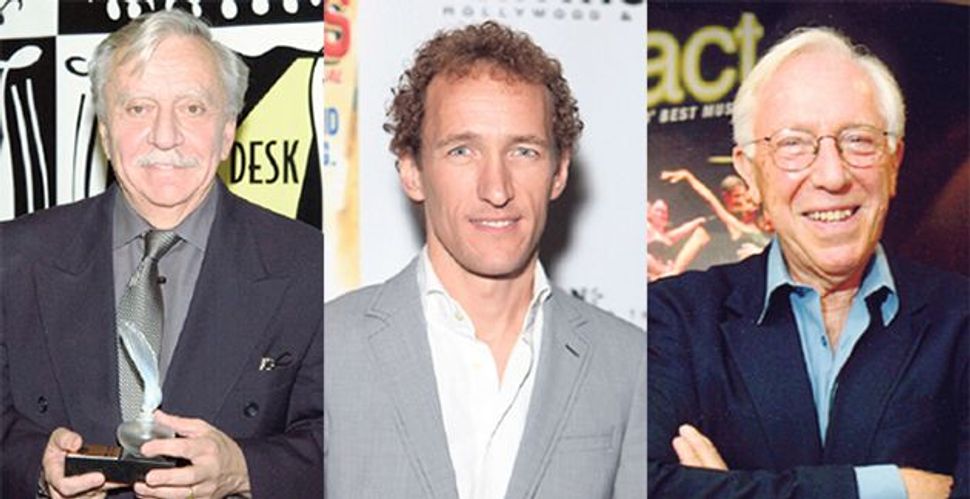 In the musical “Spamalot,” King Arthur wants to bring his troupe to Broadway, but is advised (in song) against it:

In any great adventure
That you don’t want to lose,

Victory depends upon the people that you choose.
So, listen, Arthur darling, closely to this news:
We won’t succeed on Broadway,
If you don’t have any Jews.

It’s obviously an exaggeration, but an exaggeration rooted in truth. Jews have been active on Broadway far out of proportion to their numbers, onstage as well as behind the scenes. Many of the great Broadway composers, such as Oscar Hammerstein, Richard Rodgers, Stephen Sondheim and the Gershwin brothers, were Jewish, as were Arthur Miller and Neil Simon, two of the 20th century’s greatest playwrights.

“Part of the reason is that there was no prejudice in the theater,” said longtime producer Emanuel “Manny” Azenberg, who has produced most of Simon’s works, along with many other plays. “There were no limitations because you were Jewish. That, and it was part of the Jewish tradition. Theater was not foreign.”

Names like Azenberg, Bernard Gersten and Jeffrey Seller are responsible for some of the great moments in theater history. And while these men came to theater in different ways, they all trace their interest to their Jewish roots.

Gersten, executive producer of Lincoln Center Theater, is responsible for the critically praised recent revival of “South Pacific,” among many other successful shows. He attributes his involvement in theater — at least in part — to getting caught up in the drama of the High Holy Day services at his father and grandfather’s respective Orthodox synagogues, in Newark, N.J.

“The first curtain I encountered was the velvet curtain to the ark,” he said. “I always knew what I was going to find behind when the curtain was pulled back, but there was also an aspect of the mysterious and the wondrous. Then I found the counterpart of that in the legitimate theater. It’s still the revelations of theater that I find a primal mystery.”

There were other influences, as well. Gersten first appeared in a play in third grade, and had a one-performance run in “The Mad Hatter’s Tea Party” in sixth grade. “I came into my own, because I got laughs,” he remembered.

In the military during the World War II, Gersten was assigned to special services, where he met actors Maurice Evans and Judith Anderson. “I was 20 years old. I didn’t know anything about New York theater. They were a big deal,” he recalled.

After the war’s conclusion, he served as assistant stage manager for a series of plays with the pair (produced by Mike Todd). Eventually, Gersten became a producer. If “you hang around long enough, you become a producer,” he explained.

Throughout his career, Gersten has worked almost exclusively in not-for-profit theater, for 18 years with the Public Theater and for the past 26 at Lincoln Center. He has rebelled against his Orthodox upbringing, and now considers himself an atheist. Still, he traces his love affair with theater to those two Newark synagogues.

The first play Manny Azenberg produced was “The Lion in Winter” by James Goldman in 1966. Since then, he’s produced most of Simon’s works, including the autobiographical trilogy “Brighton Beach Memoirs,” “Biloxi Blues” and “Broadway Bound,” as well as the playwright’s Pulitzer Prize-winning “Lost in Yonkers.” He has also worked on “Ain’t Supposed To Die a Natural Death,” “Sunday in the Park With George,” and “The Wiz.” It is a list of which he’s proud. “You were judged by what you produced, and I am happy to be judged that way,” he said.

Azenberg’s father was a leader in the Zionist labor movement and worked with Chaim Weizmann; one of Azenberg’s fondest memories was meeting Weizmann when he came to the United States to meet with President Truman. Azenberg was first exposed to theater through his uncle Wolfe Barzell, an actor in the Yiddish theater, whom he saw perform both on Second Avenue, the Yiddish Broadway of the time, and on Broadway itself.

Azenberg himself got into theater after serving as an infantry lieutenant in the 1950s. “That was the real world. If you could get a job in theater, that wasn’t work — it was something else,” he said. “If you could make a living doing it, that was a thrill. It had some adventure; it was glamorous. And for me it was a way of expressing something. Going into real estate didn’t have that Jewish identity.”

Jewish identity is important to Azenberg, who runs an annual trip to Israel for show people after the Tony Awards.

Theater has changed substantially over the years, Azenberg noted: “The theater was very much New York. Now it’s more of a theme park. Plays by Arthur Miller and Neil Simon had the rhythm of New York and New York Jews.”

What’s changed? Prices, for one thing. Theater is “less accessible to the poor kid in the Bronx,” he said. The economics also make it harder to attract good actors. “You can make more in a week doing a commercial than you would in a play — if the play runs,” Azenberg said.

Jeffrey Seller is more optimistic. “The theater has always been in peril, but it always finds a way to emerge,” he said.

Seller was raised in a suburb of Detroit and was first exposed to theater at the annual Purim play of Temple Israel, a local Reform congregation.

“In the fourth grade… I was plopped into the chorus,” he recalled. “What made the plays in our temple so unique and inspiring is that the director would juxtapose the story with a Broadway musical. So when Queen Esther was singing about the king, she would be singing, ‘I’m gonna wash that man right out of my hair.’ I got both the experience of Purim and every composer from Rodgers and Hammerstein to Gilbert and Sullivan.”

Seller continued acting in plays and musicals throughout his school years. When he started college, he began to wonder, “Who picks the plays?”

After college, Sellers came to New York and worked for producers Barry and Fran Weissler. He also took a part-time job as artistic director of Rodeph Sholom, a synagogue on Manhattan’s Upper West Side. But his life changed when he attended a workshop of a play by Jonathan Larson that was based on the opera “La Bohème.” “I wrote him the next day, saying. ‘I want to produce your musical,’” Sellers said. That musical was “Rent,” and the rest — including a Pulitzer Prize and a Tony award — is history.

As for the Jewish connection to theater, Sellers thinks it might have to do with an affinity for storytelling. “This is a culture that has embraced art, embraced storytelling. So it is no surprise it would embrace this form,” he said.

All of which proves that “Spamalot” might be right: King Arthur would have had a better shot at the Great White Way if only the Round Table had been kosher.

Look Out Broadway, Here They Come!