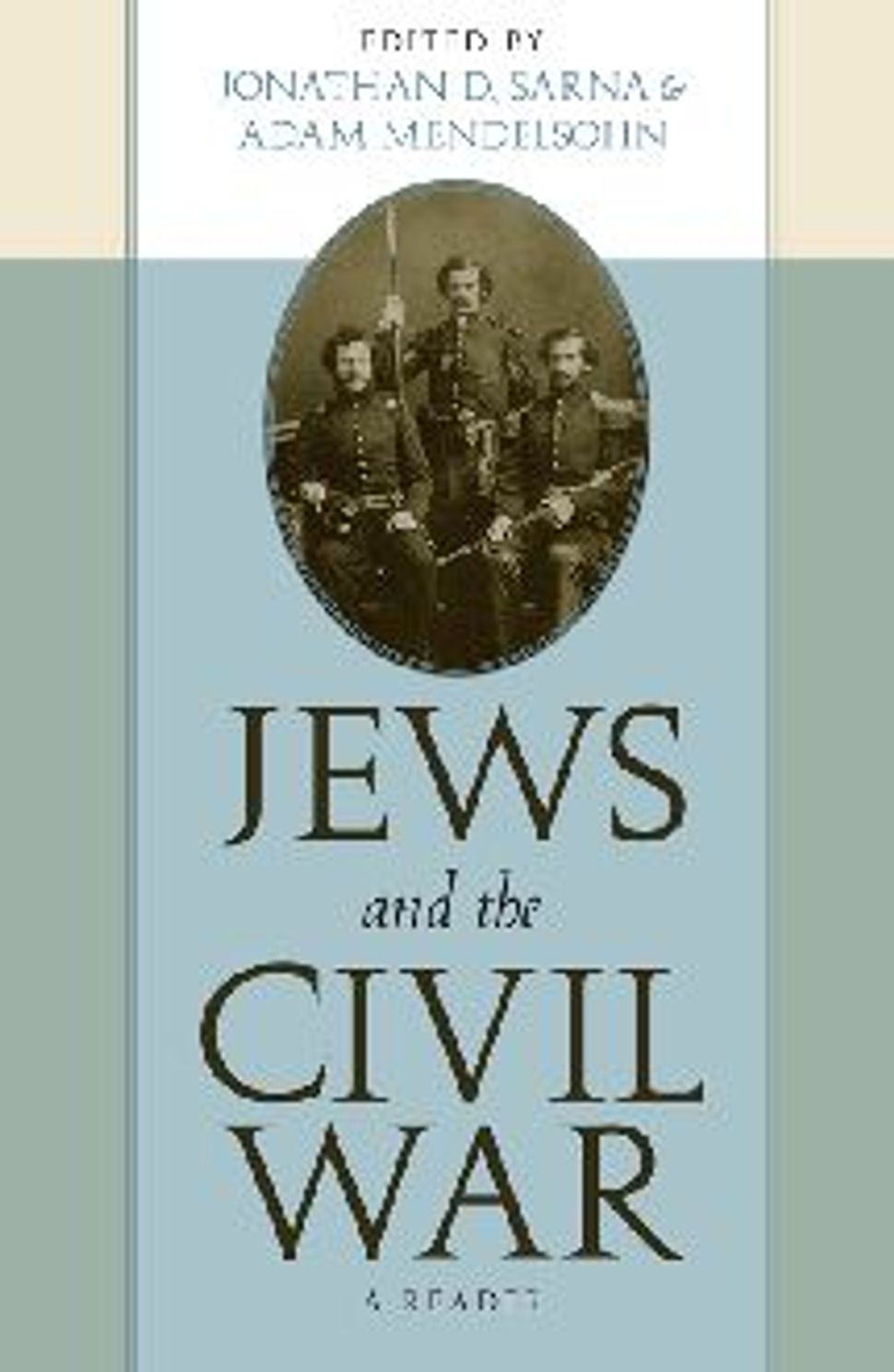 ?Jews and the Civil War: A Reader? edited by Jonathan D. Sarna and Adam Mendelsohn.

This coming April marks 150 years since the outbreak of the American Civil War. The role of Jews in that conflict became a subject of historical inquiry in the context of rising anti-Semitism, about a quarter-century after hostilities ended. An article defending the patriotism of American Jews, appearing in 1891 in the prestigious North American Review, recalled that, on both sides of the Civil War, “the American Israelites stood shoulder to shoulder with their fellow-citizens of all other races and creeds.” One J.M. Rogers, who described himself as a former Union soldier and Army recruiter, responded in a letter to the editor, “I cannot recall meeting one Jew in uniform or hearing of any Jewish soldier.” This hardly surprised Rogers, “For we know from the Hebrew scriptures that the children of Abraham were terrible warriors.”

Jewish amateur historians sought to refute the canard with an outpouring of lists of Jewish Civil War soldiers on both sides (including an unknown number of gentiles with Jewish-sounding names), accounts of Jewish heroism and self-sacrifice, stories suggesting a special link between Abraham Lincoln and the Jews, and the lionization of the “brains of the Confederacy”: former U.S. Senator Judah P. Benjamin of Louisiana, who served the South in three Cabinet positions. All Jews North and South, it seemed, had demonstrated their Americanism through unswerving loyalty to their respective sections of the country.

Not until the publication in 1951 of Bertram Korn’s “American Jewry and the Civil War” — updated and reissued several times since — did this defensive and uncritical posture begin to be replaced by scholarly rigor and a willingness to address potentially embarrassing questions. “Jews and the Civil War: A Reader” is a useful anthology of articles by Korn and his successors that collectively maps out the current state of the field. Introductions by the editors to each part of the book place these selections in the context of broader currents in Civil War historical writing and suggest avenues for further research.

The first topic, one that was avoided like the plague before Korn and remains politically loaded today, is the involvement of Jews in slavery, the “original sin” that ultimately triggered the war. The recent scholarship sampled in this volume shows that Jews did not control the slave trade — as some black nationalists have charged — but that not many of them found slavery objectionable. This, in turn, sheds light on the next section of the book. It deals with the widespread Jewish distrust of the abolitionists, whom most Jews saw as self-righteous religious fanatics endangering the Union.

Beginning in the early 1850s, one small Jewish elite did find common cause with the abolitionists: recent émigrés from Central Europe who had participated in the liberal nationalist movements of 1848 in their homelands and brought a principled love of freedom with them across the Atlantic. The most famous of these, David Einhorn, a Reform rabbi who was forced to leave slave-holding Baltimore because of his abolitionist views, is profiled in the third part of the volume, and contrasted with other rabbis who either found biblical justification for slavery or believed that the incendiary subject should not be raised from the pulpit.

After sections dealing with some of what is known about individual Jewish combatants on both sides, and with the Jewish women who kept the home fires burning, the editors devote almost 80 pages — far more than for any other topic — to four articles on anti-Semitism during the war, a phenomenon brushed aside or ignored by writers before Korn. From these pieces we learn that the original restriction of Union chaplaincy positions to Christians, the widespread charge that Jewish manufacturers provided shoddy goods to the Army and Ulysses Grant’s notorious General Order No. 11, barring Jews from his military district (quickly reversed by President Lincoln), were not just passing incidents, but rather symptoms of a real upsurge in anti-Semitism generated by wartime tensions.

“Jews and the Civil War” touches only briefly on the Reconstruction period after the war, and the editors acknowledge that “we know little about Jews and Reconstruction.” This judgment remains true even after the publication of Benjamin Ginsberg’s “Moses of South Carolina: A Jewish Scalawag During Radical Reconstruction.”

“Scalawag” was the derogatory epithet that Southern whites used to denote those few of their fellows who cooperated politically with the Republican state governments that were set up in the South after 1867, based on universal black suffrage, and readmitted into the Union. The great majority of whites ardently opposed equal rights for the newly freed slaves, and within a decade a combination of financial scandals, Republican infighting, and violence and intimidation of black voters brought Reconstruction to an end, and white supremacists to power, across the South. Although the Reconstruction state governments instituted much progressive legislation, the short-lived experiment in biracial democracy became — rather unfairly — a byword for governmental incompetence and corruption, and for years thereafter, whites would justify the suppression of black voting as the only way to prevent a repeat of the “horrors of Reconstruction.”

Franklin J. Moses Jr. was the scalawag governor of South Carolina from 1872 to 1874. Known to history as the “robber governor,” his record for corruption has prevented even revisionist historians, eager to emphasize the positive in Reconstruction, from upgrading his reputation. Ginsberg, however, takes Moses at his word that others stole more money than he did, and that what he took was for the purpose of building a political machine rather than enriching himself.

More important, Ginsberg suggests that because Moses was Jewish, and hence blocked from rising very far on South Carolina’s social pyramid, he made common cause with an even more marginal group: the downtrodden former slaves. They valued him, Ginsberg says, as “the only white politician who seemed genuinely blind to racial differences.” In something of a precursor to the legendary black-Jewish alliance, Moses rose to the governorship on the strength of the black vote. Ginsberg believes that this Jewish scalawag’s crossing of the color line, not his corruption, is what has tarnished his image.

But Ginsberg’s own evidence demonstrates how little of this is true. First, Moses was in no sense Jewish; his father, Franklin Sr., had been, but he left the community to marry a Christian. Thus the future governor was born and raised a Christian, married a Christian woman and never showed an iota of interest in anything Jewish. Second, far from facing economic or social barriers, both father and son were successful lawyers and public figures before the Civil War. And third, Franklin Jr. had no commitment to racial equality, but rather an unprincipled drive to further his own career. An outspoken secessionist in 1861, Moses opposed rights for the freed slaves until Congress forced these rights on the South, at which point he suddenly became the black man’s friend. One wonders why Ginsberg does not take more seriously the admission that Moses made years later, quoted in this book: “I wanted to be governor…. I saw there was but one way — make myself popular with the niggers….”

After Reconstruction — again, according to Ginsberg’s own account — Moses “deserted his wife and stole from his mother,” developed a drug habit and served prison terms for a series of petty crimes. By the time he died “under suspicious circumstances” in a rooming house in 1906, several members of his family had changed their surnames so as to disassociate themselves from the disgraced Moses.

Yet, Ginsberg’s confusion about whether his scalawag hero was a Jew does suggest a future direction for the study of American Jews during the Civil War and Reconstruction, one that comes up occasionally in the “Jews and the Civil War” anthology. Unlike Moses, more than two-thirds of the 150,000 Jews in the country in 1861 had arrived as immigrants from Central Europe since 1850, and the war and its aftermath constituted their crucial Americanizing experience. Surely it would be important to understand the diverse ways that these Jews negotiated and resolved — or failed to resolve — the disparities between their Jewish and American identities.

Lawrence Grossman is the editor of the American Jewish Year Book and the author of “The Democratic Party and the Negro, 1868–1892” (University of Illinois Press, 1976).