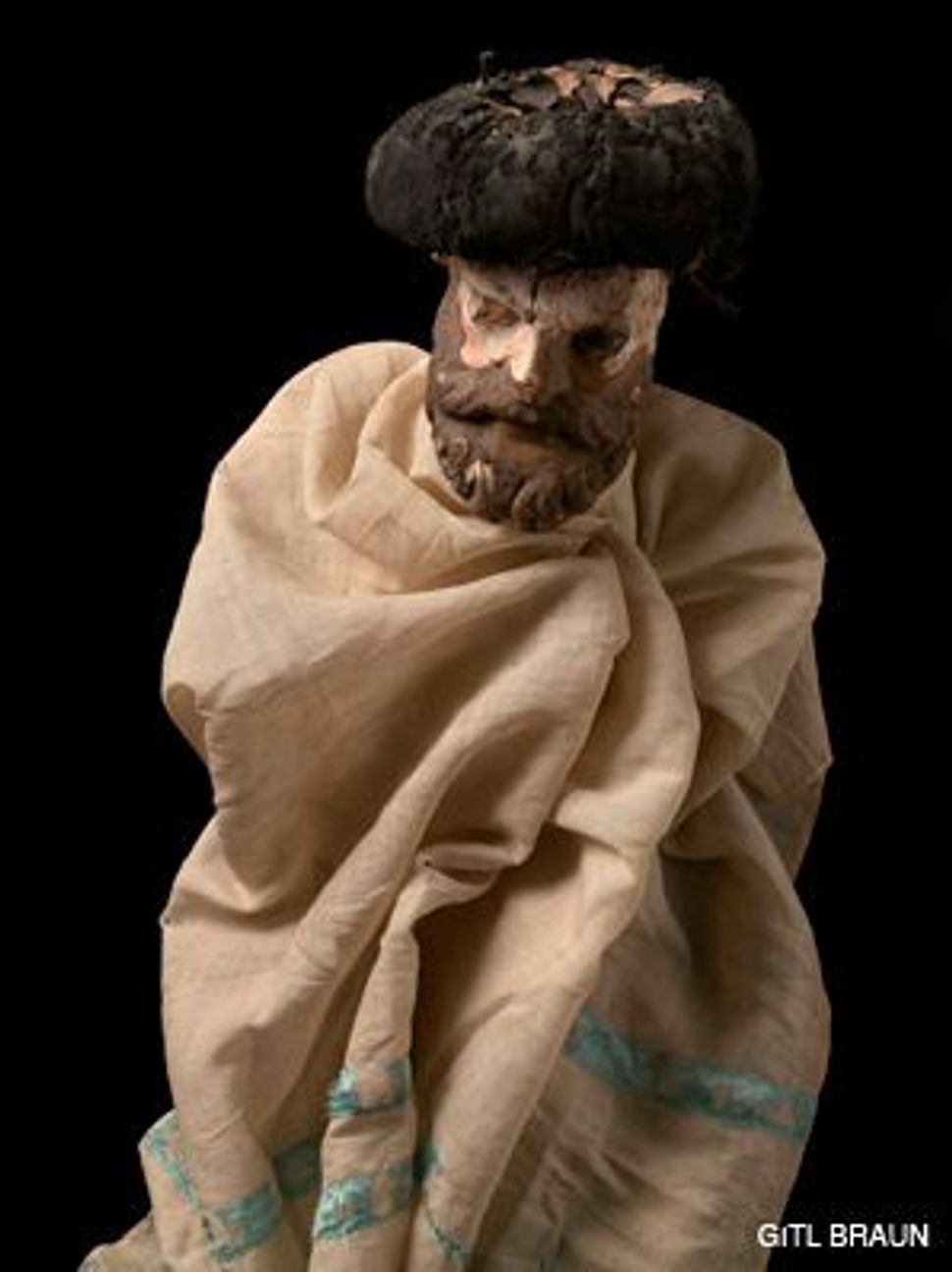 L?CHAIM: In her series ?Awakening Puppets,? Braun breathes new life into an collection of wooden dolls.

When Gitl Braun’s art professor suggested, “Go back to your womb,” Braun took the advice literally. The Hasidic mother of eight sat down in her family’s sukkah, which doubles as her studio, and began studying a photograph of her uterus, taken after her recent hysterectomy. It was Sukkot that week, and the glass-ceilinged space was strung with pomegranates. She looked back and forth from the image of her womb to the plump red fruits, and something “just clicked,” the Israel-born, London-based artist recalled in a recent interview with the Forward. 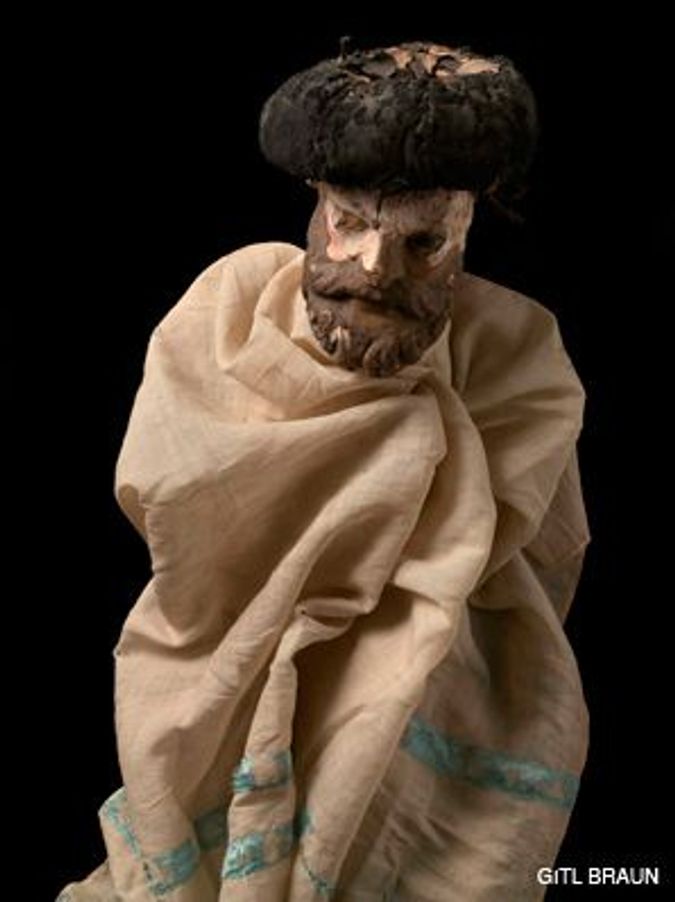 L?CHAIM: In her series ?Awakening Puppets,? Braun breathes new life into an collection of wooden dolls.

“I covered a pomegranate in a cotton serviette, like it was skin, and started to photograph it,” she explained in her Yiddish-inflected English, carefully choosing her words. “I saw potential in the fabric, in the folds and creases, like a metaphor for the body.”

Since then, the sculptor and photographer, modest in both dress and demeanor, has been named one of the top 10 on Saatchi Online, a Web site where thousands of nonprofessional artists display their work. She has shown her work at several venues in London, including the Jagonari Women’s Educational Centre, Bruce Castle, Hornsey Library and the Brady Arts Centre, and she has been profiled in the Guardian and The Times of London. Through this month, a selection of her photographs is on view, by appointment only, at the SoHo Synagogue in downtown Manhattan, and she’s having another exhibition in London, at City Hall, early next year.

During the opening of that very first show, at Saint Martins, the artist herself was sadly absent: She was in Israel, sitting shiva for her mother. This intersection of new beginning and ending, a reminder of the circle of life, is a theme running through not only her biography but also her work. Braun, whose subjects have also included antique wooden puppets and ancient Hebrew volumes, describes her process in such terms as “giving breath,” “animating” and “bringing to life.”

Braun (nee Wallerstein), the second oldest of five children, considers her parents, both Holocaust survivors, her greatest influences. Her mother was sent to Auschwitz at age 21, and her father, who lost his first wife and children during the war, was a slave laborer in the deep copper mines of Bor, Yugoslavia. They two met in a refugee camp and moved to Haifa, then to Jerusalem, where they lived in dire poverty in the ultra-Orthodox community of Mea Shearim. “My parents didn’t speak about their past, but it was very present in the atmosphere, what they went through — this agitation, this fear,” Braun recalled. “Only once I asked, and when I wasn’t given an answer, I knew I should not ask anymore.”

Because Braun’s parents could not afford more than a one-room flat, they sent her and her older brother to live in a nearby orphanage, where the walls were filled with reproductions of paintings by such Jewish artists as Isidor Kaufman and Adolph Gottlieb. “That’s how I was introduced to art,” Braun said. “Before I had children, I painted, I did pastel. But then the children arrived, so I put it on low flame.”

Then about eight years ago, with all her children grown, Braun picked up her paints again and gained entrance to a five-year program at Saint Martins. For the first time in her life, Braun — who had entered into an arranged marriage with Marton Braun at age 18 — was asked to confront issues of identity. She describes the course as an inward journey, encouraging her to not only explore her womanhood, motherhood and religion but also a new form of expression: photography. She said she simply “bumped into” the book “A Vanished World,” a collection of pre–World War II images of Eastern European Jews by Roman Vishniac, and thought: “I can see my community. It’s not vanished.” She began taking photographs of her neighbors in Stamford Hill and just never put down the camera. “It suited me better,” she said.

In some ways, Braun sees her work as a means to end to the tortured silence of her parents’ generation. She follows in the tradition of such contemporary photographers as Vik Muniz and Thomas Demand, who make constructions for the sole purpose of shooting them. Many of the objects she photographs come to her via her husband, a lifelong collector of Jewish art and artifacts ranging from 11th-century documents to a turn-of-the-19th-century talit (the world’s oldest, he says) to pre-Holocaust paintings.

Marton is clearly enamored of the newfound passion and talent of his wife, whom he refers to affectionately as “Mommy” — a term he picked up from his children, whose eight voices simply drowned out his own, he explained. In fact, he brought his wife the ancient Hebrew printing blocks that became the subject of her self-described modern masterpiece, “Martyred Letters,” 2007. Braun carefully arranged the blocks to look like a pile of rubble and, with her father in mind, used them to spell out the words “Hanehovim Haneimim Vehayesharim,” meaning “The Beloved, The Pleasant, and The Just,” from the Av Harachaman prayer recited on the Sabbath for the soul of the martyrs.

For her most recent series, “Awakening Puppets,” 2007-08, she revivified early-19th-century Sicilian wooden dolls — found in a Naples curiosity shop by the Brauns’ longtime friend and framer, Louise Liddell — by draping them in antique fabrics and assigning them personalities, mostly from the Bible. The last two in the series of 18, a number that in Hebrew symbolizes life, are “Bright Day” and “Free at Last,” images of the puppets outdoors, seemingly enjoying one another and the sunshine.

Next, Braun will travel to Catalonia, Spain, to photograph 13th-to-14th-century registrars’ books whose bindings, it was recently discovered, were made from recycled Jewish manuscripts. “As the pigskin began falling apart, suddenly these documents began showing themselves,” Marton said, visibly excited. “Gitl has realized their visual potential, in their raw form, as they emerge after burial of 700 or 800 years.”

In other words, Braun, at age 58, will give them something she has also managed to give herself: a second life.

Julie Brener is a freelance writer and associate editor at Art+Auction magazine.