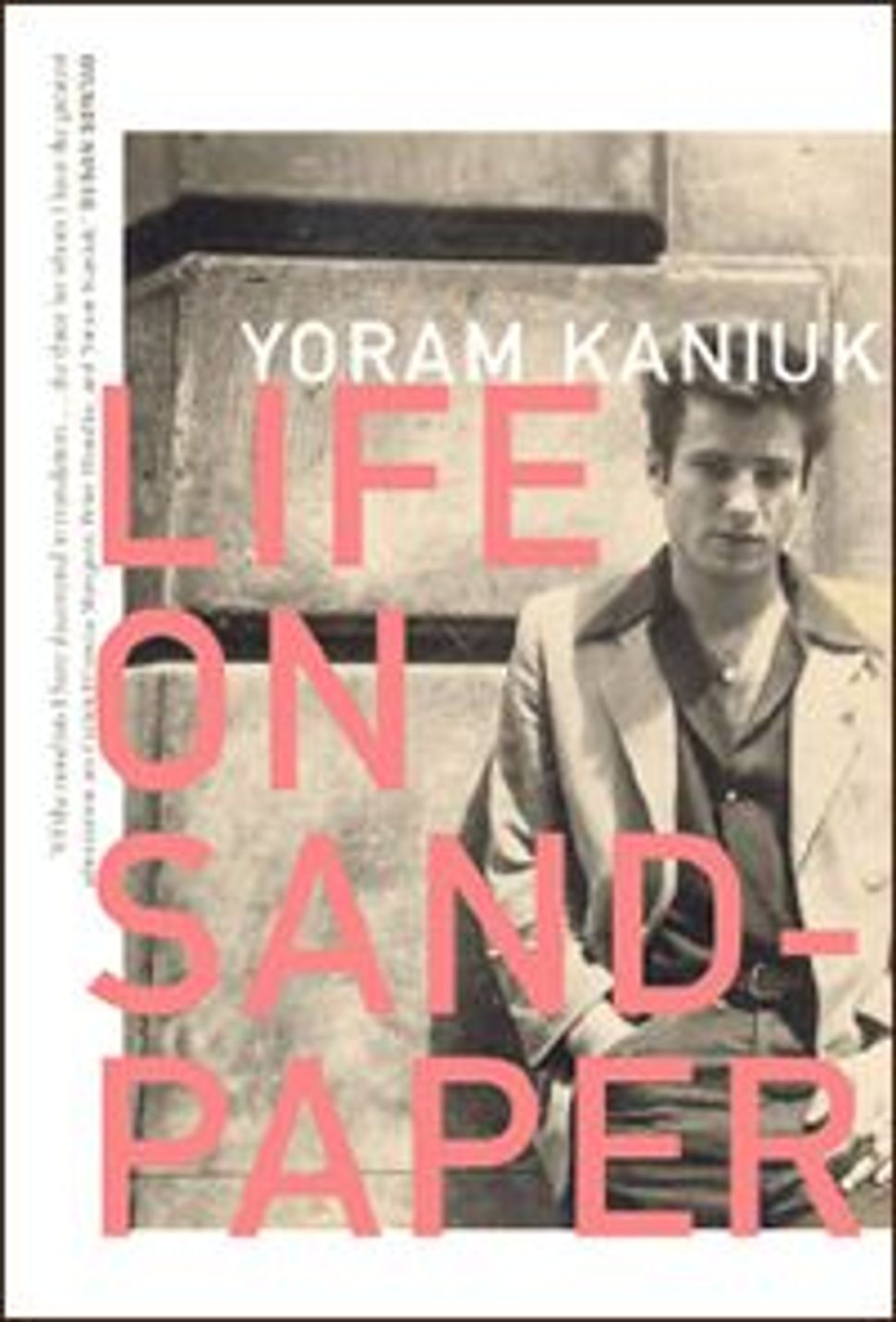 Life on Sandpaper, By Yoram Kaniuk,

In 2007, I conducted a highly unscientific poll of Israeli readers. I was in the Jewish state on a research fellowship, but official business soon gave way to much unofficial business, which included long conversations about Hebrew culture over large amounts of excellent coffee. My poll consisted of a single question: Who is your favorite Israeli writer? Though I must admit that the data were never tallied, impressions were definitely made. Hearing Yoram Kaniuk’s name time and again was the most surprising result by far. He clearly made the top 10 and may well have cracked the top five.

I certainly knew who Kaniuk was. I had even read one of his novels in the original Hebrew (“Confessions of a Good Arab”), but that novel’s contrived treatment of Israeli identity rang hollow to me. Despite his prodigious output (30 books and counting, most of them fiction), his name just isn’t mentioned much in academic circles. And though a number of his books have been published in English over the years, most of them are now out of print. 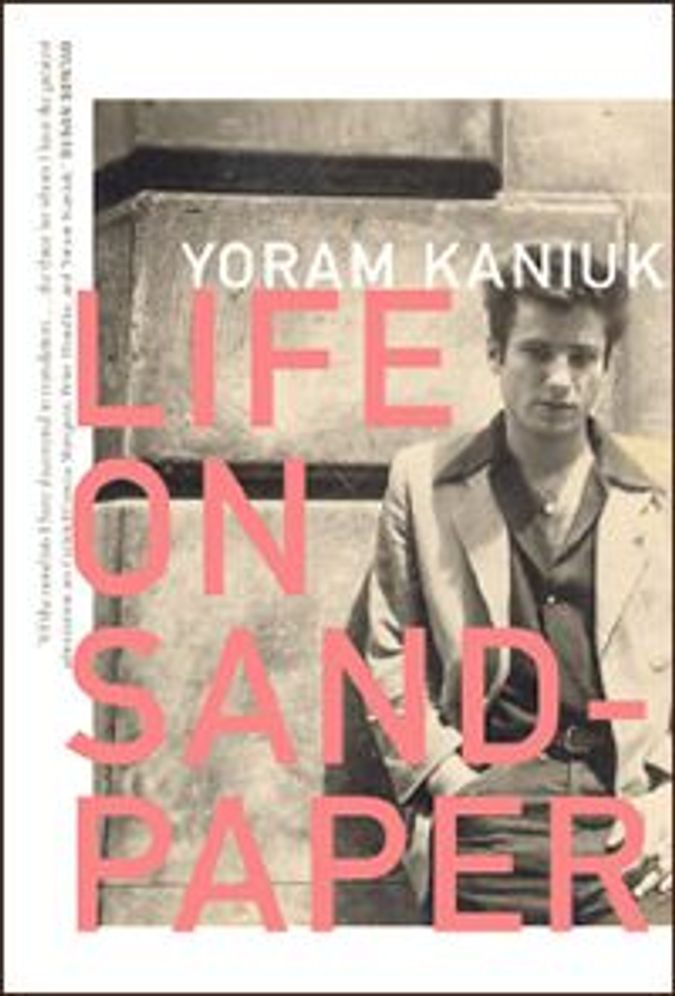 Life on Sandpaper, By Yoram Kaniuk,

All of which is to say I was intrigued to hear that Kaniuk’s 2003 semiautobiographical “Life on Sandpaper” was to be included among the first titles published as part of Dalkey Archives Press’s Hebrew Literature Series. After reading it, I now understand what all those Israelis were talking about. Throughout “Life on Sandpaper,” the sheer, often humbling force of Kaniuk’s creative will is on full display.

“Life on Sandpaper” chronicles the more than a decade that Kaniuk spent living in New York after being injured in Israel’s War of Independence in 1948. This setting makes Dalkey’s selection a bit curious, as it seems safe to assume that most American readers pick up books by Hebrew writers in order to learn about Israel. This book teaches us little about Israel, and Kaniuk’s New York story’s central ingredients (American people and places) are unquestionably less strange for American readers than they were for the original Israeli audience. Nevertheless, Dalkey should be applauded for this bold choice, as most readers of Kaniuk’s book will finish it with a new appreciation for the range of subject matter Hebrew writers are capable of illuminating.

The overwhelming majority of “Life on Sandpaper” reads as a series of loosely connected episodes with virtually no plot development, giving the book a picaresque quality. Kaniuk describes a sequence that lasts a few pages and then moves on to the next one, which often has nothing do with what came before.

All this renders plot summary somewhat marginal, but because many things happen, here goes: Kaniuk arrives in New York, integrates himself into the bohemian art scene, becomes a painter, marries twice, travels throughout North and Central America, loses his enthusiasm for painting, begins writing, becomes a father, publishes his first book and returns to Israel. Along the way he meets hundreds of people, has endless, unbelievable adventures and witnesses (as well as participates in) the rise and fall of the postwar New York art and music scene.

Kaniuk’s disinterest here in sculpting a single, overarching storyline — along with his use of long, long paragraphs — leads to an occasionally wearisome reading experience. Indeed, the book feels like less than the sum of its many, many parts. But what parts!

Compared with so much anemic contemporary American fiction — in which a single idea, situation or (more often) gimmick is trotted out and then squeezed bone-dry over the course of 200 overly manicured pages — “Life on Sandpaper” overflows with enough impossible situations and memorable characters for a few dozen novels.

An angry camel running down Seventh Avenue at one in the morning; a man reading Hayim Nahman Bialik’s complete works in the back of a hardware store in Laramie, Wyo.; a Jewish woman who becomes a convent nun in Spain, only to return to New York with $30,000 worth of hash smuggled inside her habit; an Israeli ex-pat (Kaniuk, that is) pretending to be a Russian refugee in order to sweet-talk Ginger Rogers into a dance while attending a surprise party for Tennessee Williams. Kaniuk’s New York exists on a mythic plane, a fact somehow intensified by the direct, understated nature of his prose (well rendered throughout by translator Anthony Berris).

As the Ginger Rogers example suggests, Kaniuk finds himself crossing paths with a veritable who’s who of 1950s New York: Marlon Brando, Steve Allen, James Dean, Yul Brynner, Dylan Thomas, Leonard Bernstein, Miles Davis, Billie Holiday and, exalted above all, Charlie “Bird” Parker. Kaniuk’s reverence for Parker, even 50 years later, still remains as keen as those jazz musicians who lamented the saxophonist’s premature death in 1955, at the age of 34. Here, Parker is at once a larger-than-life figure, but also a man whom Kaniuk gets to know quite well: Bird drinks Manischewitz by the bottle to deal with the pain of heroin withdrawal, loves Westerns and has a surprising affection for Liberace.

In one of the book’s emotional high points, Kaniuk paints a portrait of Bird — a painting he believes to be his best work ever, a painting that eventually disappears after Kaniuk’s showdown with a high-priced prostitute. And it is here that Kaniuk dies as a painter, to be reborn, perhaps, as a writer: “I looked at the painting and this was the crucial moment, it was the best of my paintings but I also realized that it wasn’t good enough, that I would never be the painter I wanted to be, would never be more than just another painter.”

In addition to 1,000 other improbable details, Kaniuk’s claim of intimacy with Bird naturally raises the question of this hyperbolic tale’s veracity. Thankfully, the author spares us any need to look into whether or not he’s an Israeli James Frey. In a brief author’s note at the beginning of the book, Kaniuk displays a wisely casual disinterest in the whole question when he writes, “It isn’t entirely incorrect to call this book a work of fiction, despite its being an account of my memories of a certain period of my life.”

The ultimate sign of this remarkable book’s success is that Kaniuk simultaneously has you wishing it were all somehow true, while at the same time not really caring whether or not it is. And Kaniuk gets credit either way. I finished “Life on Sandpaper” longing for a now inaccessible world, large parts of which perhaps only ever existed in the imagination of a native Israeli fortunate enough to spend his 20s in that most wonderful corner of the Diaspora we call New York City.

Todd Hasak-Lowy is an associate professor of Hebrew at the University of Florida and author of the novel “Captives” (Spiegel & Grau, 2008).