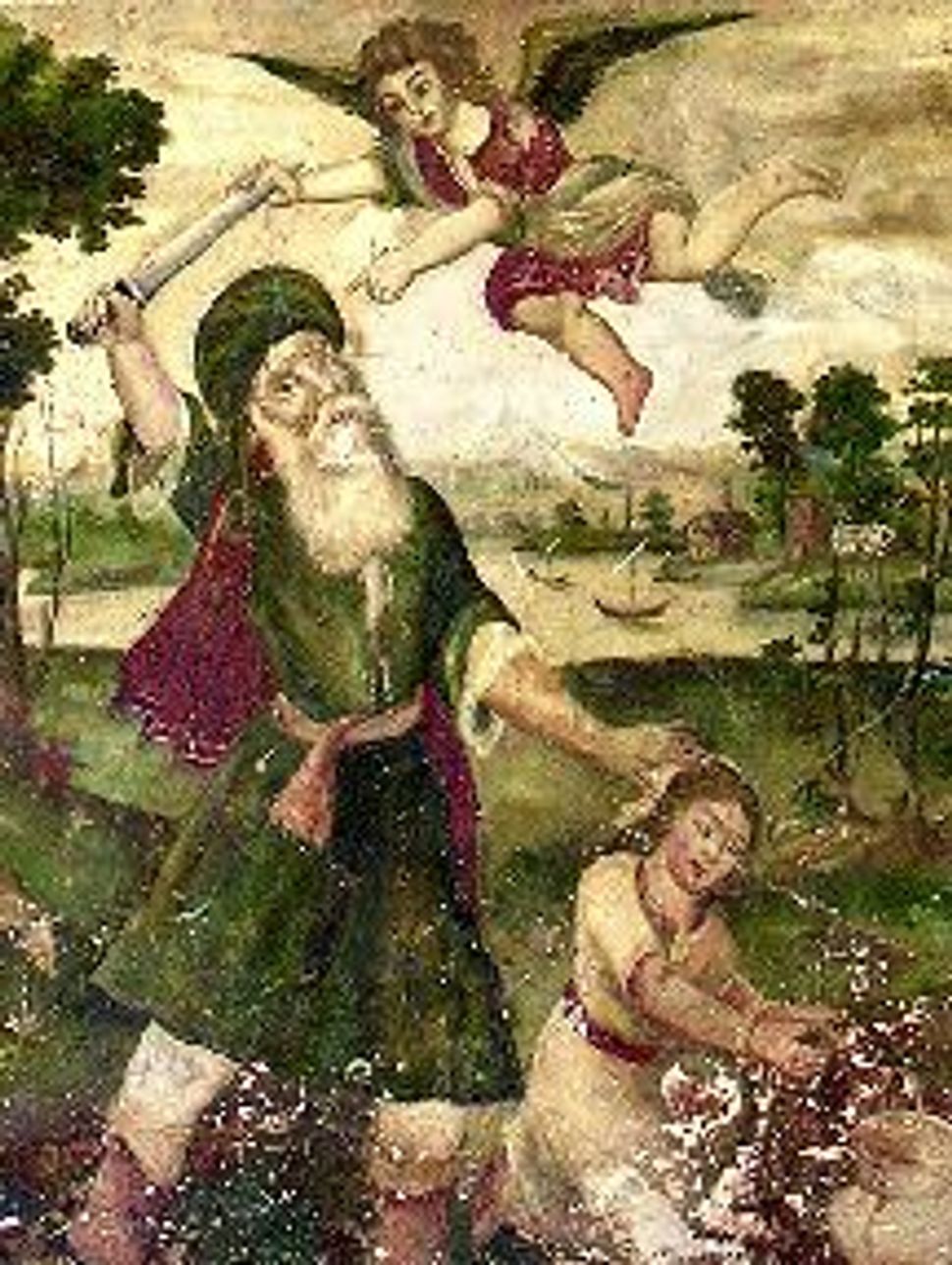 Choose Life!: In all Abrahamic faiths, divine intervention ? seen here in this Muslim fresco from Persia ? prevents Abraham from sacrificing his son. Image by Wikicommons

‘The past is never dead. It’s not even past.” So said William Faulkner in his “Requiem for a Nun.” If proof of this statement is needed, the history of Israel — where events thousands of years old are still alive and kicking — is a perfect instance. And within this history, Genesis 22, the biblical story of the binding of Isaac by his father, Abraham, is the quintessentially living proof-text. Reverberating through the centuries, interpreted and reinterpreted, an unparalleled emblem of faith, or a distressing darkness, in Jewish identity, the Aqedah (binding) is not simply myth. It is history and politics, it is theology and psychology, it justifies violence and war, it embodies the Oedipal struggle between fathers and sons, and it can equally be used to argue against heroism and sacrifice, and even against God.

Audaciously tracing the complex impact of the Aqedah in Israeli culture, Yael Feldman shows how violence in the name of the Almighty gradually morphed — in Hebrew literature, art, historical studies and political debate — into violence in service of national goals. Looking at Zionism’s glorification of “osher aqedah” (the bliss of the aqedah), she also notes the phenomenon of the “Mother Abraham” (her coinage) who proudly sacrifices sons (taken from the story of Hannah in II Maccabees Chapter 7, much enhanced in rabbinic writing,) and she notes how poets associated with the pioneers of the Third Aliyah, such as Uri Zvi Greenberg, use Christian imagery in describing Jewish suffering. Most interestingly — and an American audience should sit up and pay attention here — she demonstrates how a counter-cultural rejection of sacrifice based on the Aqedah has threaded through Israeli history, both in the increasingly audible voices of women writers and in the work of male writers from Martin Buber to Amos Oz, David Grossman and A.B. Yehoshua.

But wait. A lay reader of the Bible may ask: Isn’t Isaac saved from being killed in Genesis 22? Isn’t the story a parable that raises the specter of child sacrifice in order to reject it? Where does ‘the bliss of the aqedah’ come from?

Here is where the roots are complicated. There exists a history of post-biblical writing including Philo, Josephus, and the Midrash Genesis Rabbah that represents Isaac as cooperating joyfully in his father’s plan to sacrifice him — even, in one text, asking his father to make sure that his bonds are tight, so that he will not struggle and thus cause the sacrifice to be blemished. In some medieval midrashim composed during the Crusades, Isaac is even slain and resurrected.

Among the secular adaptations of Jewish martyrdom that Feldman examines are the celebration of active self-sacrifice in Yitzhak Lamdan’s influential 1926 epic poem, “Masada,” and the lament in Yigal Mossinson’s 1948 play, “Be’arvot haNegev” (“In the Negev Plains”), “that the old go on living and the young are sent to their death” — a motif that evolves through the 1950s and ’60s in work that represents guilt-ridden fatherhood as “tragic necessity.” In poet Natan Alterman’s words, “Not from the written page will the city rise/ But from fire and wood and burnt sacrifice.” In S. Yizhar’s epic novel of the War of Independence, “Yemei Tziklag” (“Days of Ziklag”), an internal monologue of a besieged soldier seethes: “I hate our Father Abraham for going to bind Isaac. What right has he to bind Isaac. Let him bind himself. I hate the God that sent him to bind and closed out any other route.” Yet the monologue concludes, “This is what life is like…. If you’re not ready to be killed and kill — there’ll be no good in the world. No justice, no love, no beauty.”

In the wake of the 1967 war, writings of “the Isaac generation” (a term coined by the novelist and pacifist Shulamit Hareven) split between triumphal anticipation of a Greater Israel and mordant critique of militarism. The blinded soldier-son of Mossinson’s 1969 play, “Shimshon” (“Samson”) is both suicidal and aggressively trigger-happy. In 1970, “The Queen of the Bathtub,” a musical by young satirist Hanoch Levin, mocks Israel’s political leadership in a Brechtian dialogue between a co-dependent father and son competing for victimhood. Shlomo G. Shoham’s anti-Freudian 1975 essay, “The Isaac Syndrome,” couples the “voice of the subconscious dynamism, which identifies the absolute command of God with the covert infanticide wishes of the father” with “the compulsively obedient son.” Israel, for Shohan (who is a former Palmach warrior, and whose son was killed in the Yom Kippur War), is the quintessential “modern state, sacrificing its young to the Moloch of ideological wars.”

Following the 1982 Lebanon War and the Sabra and Shatila massacres, dissent strengthens and expands. Both women and men poets ask, “Where was Sarai?” The young poet Yitzhak Laor, in “This Idiot, Isaac,” disdains his namesake’s obedience.

To trust such a father? Better rise up first to kill him. Better lock him up, his father, his
only Abraham, in prison in asylum in the house cellar — anywhere — so as not
to be slaughtered. Isaac, Isaac, remember what your father did to your brother Ishmael.

By the time A.B. Yehoshua published “Mr. Mani” (“Mar Maniy,” 1990), in which an Avraham ambiguously assists in the murder of a son who identifies too closely with the Arabs of Jerusalem, and David Grossman publishes “Isha Borahat Mibesora” (“To the End of the Land”), osher aqedah seems to have evaporated from the Israeli intellectual scene. Dense as Feldman’s study is, rich with the manifold intricacies of Hebrew literature and culture, we may conclude that the author welcomes the disappearance of this particular trope. For her, the “bliss” is not blissful. For American readers unaware of the long-standing depths of debate in Israel, this book is essential reading.

In this excerpt from Adam Levin’s “The Instructions,” the protagonist, Gurion, provides his own exegesis of the famous Akedah story.