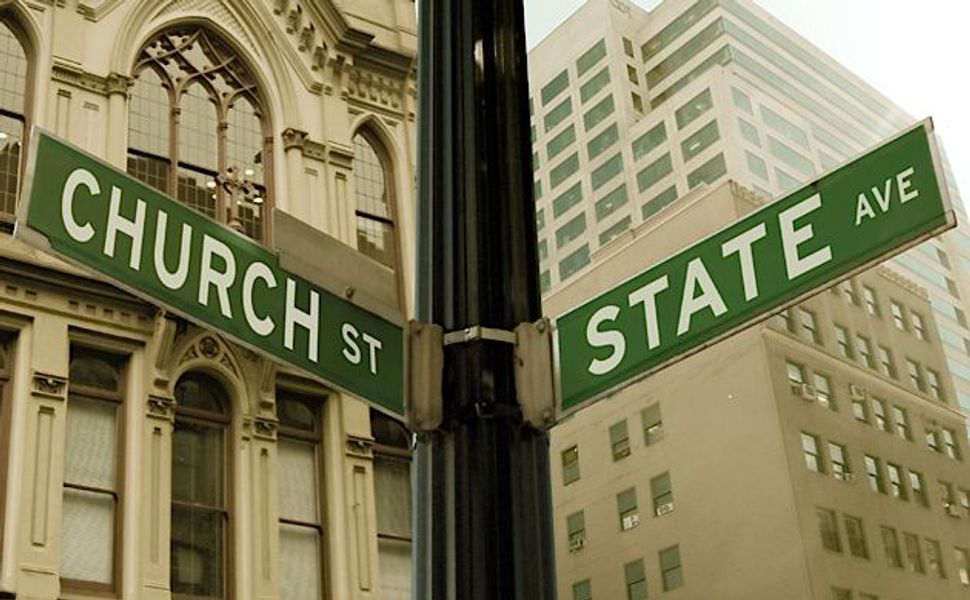 Many American Jews are nothing if not zealous in their belief in the separation of church and state. One might even say it is among the cardinal principles of their faith. For a large swath of the American Jewish community, the best of all possible worlds is one in which religion stays in one corner and government in another.

And yet, if we were to look a little more closely at the ways in which American Jewish life has taken shape over the past century, we’d be surprised to learn how often church and state actually colluded and worked in concert. For those of us accustomed to thinking that, in striking contrast to its European counterparts, the United States interfered hardly at all with the inner workings of the Jewish community, think again: The number of occasions in which government agencies actually supervised and regulated traditional ritual practice in modern America takes one’s breath away.

Early in the 20th century, for instance, New York City’s Department of Health routinely inspected every one of the area’s mikvehs, or ritual pools. When a local mivkeh fell short of what its inspectors thought to be normative standards of hygiene, the civic agency branded it a veritable “menace” to the health of New Yorkers and threatened to close its doors.

The typical heder, or afternoon Hebrew school, fared no better. It, too, was often widely criticized — and fined — by the city on account of its dismal physical properties. At these places, the Department of Health pointed out, the toilets were so poorly maintained that “they would not bear very favorable comparison with the Southern school privy, against which sanitarians hold up their hands in horror.”

Prohibition and its relationship to the distribution of sacramental wine was another instance in which the line between church and state was awfully blurry. Throughout the 1920s, U.S. Treasury officials routinely cast a hard and searching eye at how much wine American Jews imbibed when making Kiddush, the sacramental blessing over the wine, and limited their consumption of the ritual beverage to 10 gallons a year per family. What’s more, those who sought to obtain sacramental wine had to file all manner of paperwork. As one government-mandated directive would have it: “You will fill in five copies of the enclosed form #1412 which you are to sign in the presence of a Notary Public. The five copies are then to be presented to the Prohibition Director in your locality.” After this cumbersome process was completed, another five copies of form #1412 were to be generated and presented to the distributor of the product, who, then and only then, would be allowed to sell the requisite amount of wine to consumers.

What takes the cake, though, is the long-standing governmental practice of overseeing the kosher food industry, a phenomenon that dates back nearly a century. By now, we’ve come to take this intervention for granted — so much so that the recent announcement that New York State’s Department of Agriculture had suspended the use of its very own cadre of kashrut supervisors, replacing them with food safety inspectors, occasioned quite the hue and cry. The kosher-keeping members of the community gave voice to concern lest these inspectors, unschooled in the arcana of kashrut, would be unable to spot infractions of the law.

What I found most fascinating in the communal response to this staffing change was the conspicuous absence of any concern that perhaps, just perhaps, the state had no business in the first place supervising kashrut. Apparently a dead letter, that potentially nettlesome issue had been resolved years before when, in 1915, legislation was passed that made it a criminal offense to sell unkosher meat as kosher. Subdivision 4, Section 435 of the Penal Law — which the Yiddish press dubbed the “Kosher Bill” — states that anyone who “sells or exposes for sale any meat or meat preparation and falsely represents the same to be kosher, or as having been prepared under and of a product or products sanctioned by the Orthodox Hebrew religious requirements… is guilty of a misdemeanor.”

Despite repeated constitutional challenges throughout the interwar years and well into our own era, this piece of legislation, at least until recently, had not only stood the test of time and of judicial scrutiny, but had also been augmented and strengthened. In an effort to put teeth into the law, various civic agencies, including the New York City Department of Markets and the New York State Department of Agriculture, established their own teams of enforcers to ensure compliance. In many cases, as eyewitnesses noted as early as the 1920s, the members of these “kosher squads,” ironically enough, tended to be O’Reillys, McCoys and Sheehans rather than Bernsteins, Cohens and Schwartzes.

Whether this made for good interfaith relations, let alone a stable supply of kosher food products, is hard to say, but it certainly complicates our understanding of where to draw the line between church and state.