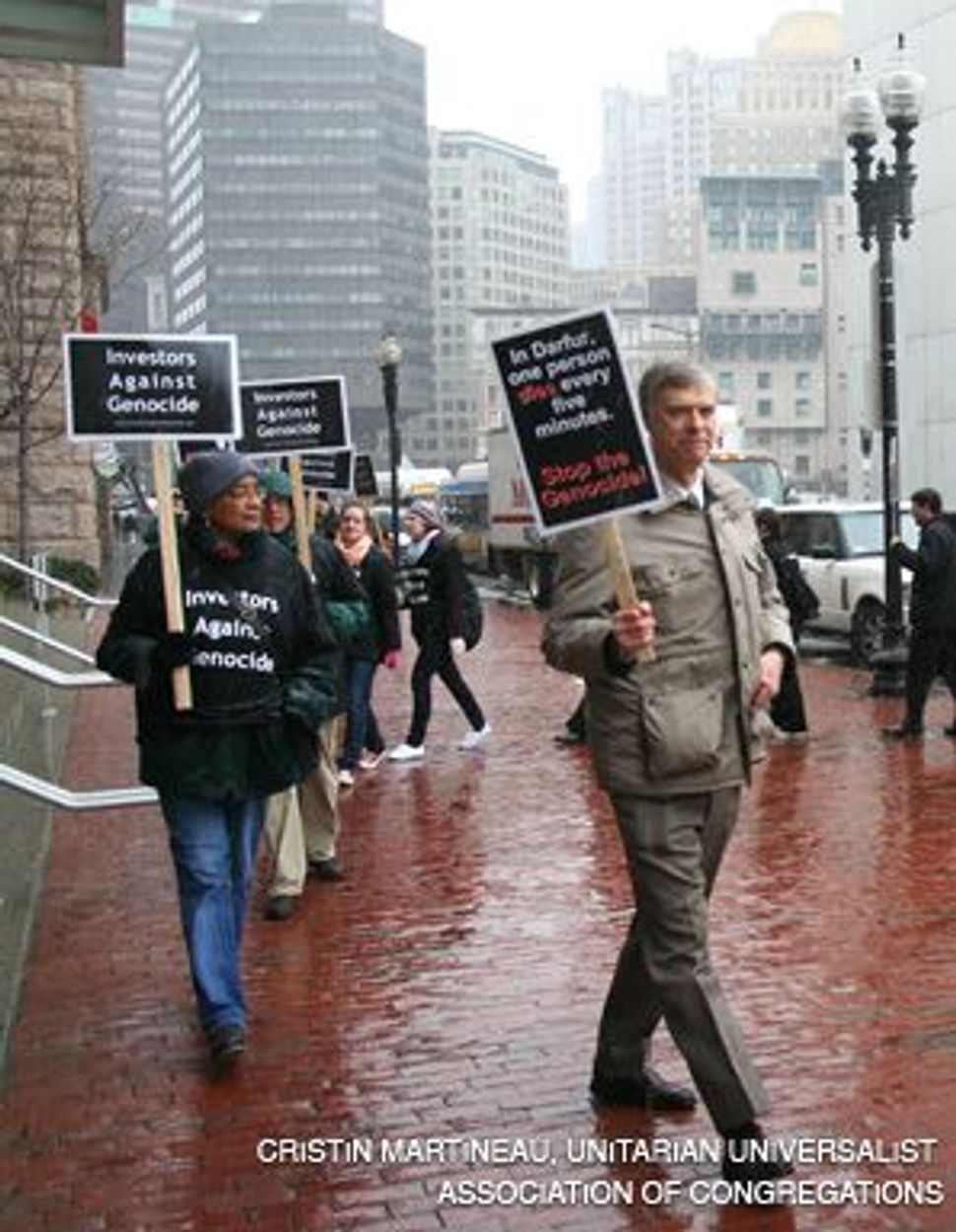 TAKING A STAND: Bill Rosenfeld, center, and members of Investors Against Genocide march outside a Fidelity shareholders meeting earlier this year.

When it comes to changing the world, sometimes how you invest is as important as how much you invest. 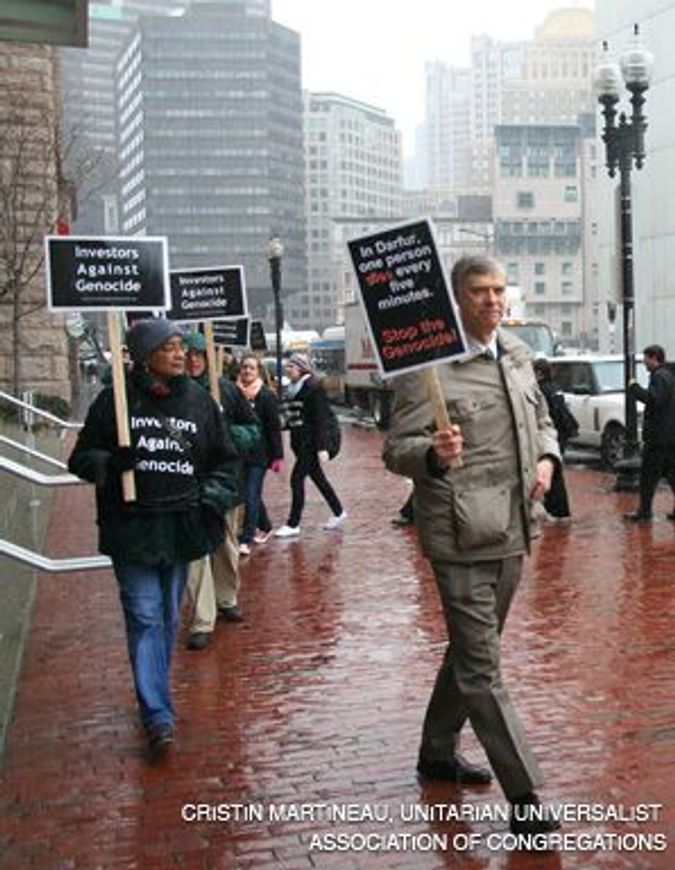 TAKING A STAND: Bill Rosenfeld, center, and members of Investors Against Genocide march outside a Fidelity shareholders meeting earlier this year. 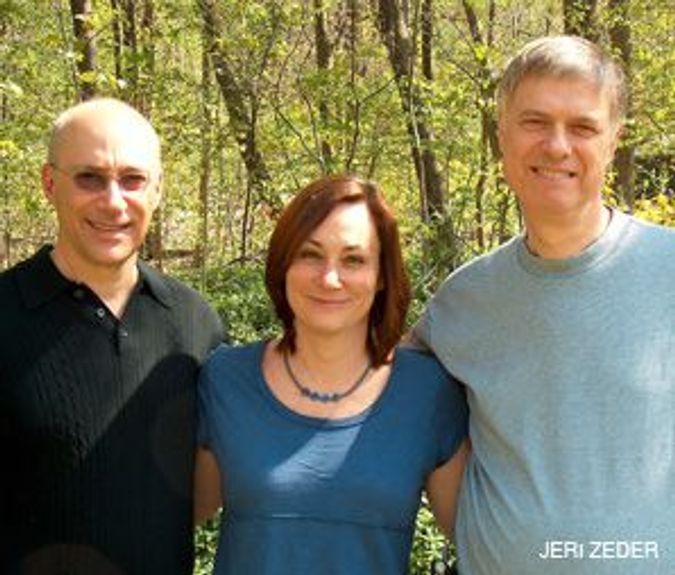 Darfur activists Eric Cohen, Susan Morgan and Bill Rosenfeld believe that if you knew your nest egg might be supporting genocide, you’d want out.

That’s the premise behind their group, Investors Against Genocide, a project of the not-for-profit Massachusetts Coalition to Save Darfur. The three 50-something Boston-area suburbanites have little, if any, prior experience in political activism. But their shoestring campaign to get financial institutions to commit to genocide-free investing is targeting an industry whose aggregate holdings in oil companies complicit in the Darfur genocide total in the tens of billions of dollars.

Their campaign began in September 2006, with a quiet effort to persuade Boston-based Fidelity Investments to divest from PetroChina and Sinopec, two Chinese oil companies whose profits, along with those of ONGC (India) and Petronas (Malaysia), support the government of Sudan. The government uses the oil revenues to finance its military and client militias, which, since 2003, have killed some 400,000 civilians and displaced another 2.5 million in Sudan’s Darfur region. On January 26, 2007 — International Holocaust Remembrance Day — after the quiet Fidelity campaign proved unsuccessful, Cohen, Rosenfeld and Morgan went public to a flurry of national media attention. They soon expanded their campaign to other major financial institutions, including Barclays, a major investment bank and financial services provider, and TIAA-CREF, which offers retirement plans to individuals and institutions in the academic, medical, research and not-for-profit worlds. Some other institutions to which the campaign was extended are Capital Research, Franklin Templeton, Vanguard, UBS, JPMorgan and Credit Suisse.

IAG has the support of a broad range of faith groups and human rights organizations and activists — including Mia Farrow, UNICEF goodwill ambassador; the National Council of Churches, and Physicians for Human Rights — and works closely with other Darfur-focused groups to achieve its goals. Ruth Messinger, president of American Jewish World Service, said: “We would not have become strong supporters of this group if we didn’t consider them highly reliable. They’ve been thoughtful about how to move the issue and [about] getting things done on the ground.” Nancy Kaufman, executive director of Boston’s Jewish Community Relations Council, calls them “heroes.”

In 2007, Warren Buffett’s firm, Berkshire Hathaway, completely divested its $3.7 billion holdings in PetroChina, and Fidelity sold nearly all its Sinopec holdings and $600 million of its PetroChina holdings. (Fidelity still holds $700 million in PetroChina.) Buffett and Fidelity claim that their divestments were not in response to activist pressure… But Allyn Brooks-LaSure, communications director of the organization Save Darfur, which works closely with IAG, doubts this. “The advocacy worked,” he said. “It worked because it was backed by solid research that allowed us to ask the right questions and push for the right things at the right times.”

IAG’s primary tactic is the filing of shareholder proposals. The proposals filed with Fidelity, for example, seek the adoption of “oversight procedures to screen out investments in companies that, in the judgment of the board, substantially contribute to genocide, patterns of extraordinary and egregious violations of human rights, or crimes against humanity.” Fidelity urges shareholders to reject the proposals, stating, “If adopted, this proposal would limit investments by the fund that would be lawful under the laws of the United States.” IAG says genocide is a special case. “Americans do not want their family savings and pension funds invested in companies that help to fund genocide, whether that genocide is occurring today in Darfur or anywhere else in the future,” Cohen said.

The proposal, filed in 32 Fidelity funds, has failed to pass in the 12 where it has come up for a vote. But an unusually high percentage of favorable votes — ranging from about 20% to 31% — has been cast over fund managers’ objections. IAG has filed similar proposals with five other companies, including Barclays and TIAA-CREF.

Cohen, 56, and Rosenfeld, 57, met through their Darfur-related work with their synagogue, Temple Isaiah in Lexington, Mass. The national Darfur divestment movement’s focus on states and universities was well under way when Cohen shared his research on Fidelity with Rosenfeld. Rosenfeld helped Cohen make initial contact with Fidelity in 2006. This was the first time that the Darfur divestment movement was extended to include financial institutions.

Morgan, 50, was working on Darfur issues in her Massachusetts town, Wellesley. She heard about a group of activists in Lexington and showed up at a meeting, where she met Cohen and Rosenfeld. They brought Morgan, a media relations specialist, on board when the Fidelity campaign went public.

All three had spent their adult lives working and raising families and were now ready to turn their energies to serious social issues.

“I wanted to do something that I could feel good about independent of the fact that it paid well,” Rosenfeld said. In 2006, he finally freed himself of all business commitments. “That was a leap of faith,” he said. “I figured after a door closed, another would open.” He was working on Hurricane Katrina issues through the synagogue when he discovered that people were looking for a speaker to come and talk about Darfur. Rosenfeld knew Messinger and helped bring her to the synagogue. The next thing he knew, he was organizing for the 2006 Save Darfur rally in New York’s Central Park.

Cohen retired five years ago from a long career in information technology. His grandfather had survived the Holocaust but never told Cohen what happened to his shtetl. Cohen learned the story through Yizkor books. “The story is like the stories you hear about Darfur. It’s a personal story, for them and who they are, but it feels just like my personal story. If you think it’s about you, then you really are motivated to do something. It’s not just some problem from far away.”

As Morgan was approaching her 50th birthday, she decided to leave her job in corporate public relations in search of work she’d find more meaningful. She traveled to Bosnia in 2005 and heard stories from the genocide survivors there. “I was very ashamed that I had not been cognizant. I really was just caught up in my own life as a young mother, and I really wasn’t paying much attention,” she said. “Before my involvement with Investors Against Genocide, I had never had an experience where I felt my singular contribution was having a large impact on the state of the world.”

Cohen, Morgan and Rosenfeld now devote themselves full time, unpaid, to IAG. “We’re very clever about how to do things for small amounts of money, but we are a tiny David fighting a massive Goliath,” Cohen said. They stay in close touch with the 10,000 subscribers to their e-mail distribution list. One day, they hope to have the resources that will allow them to do their work on a larger scale.