Giving Back: A Family Tradition 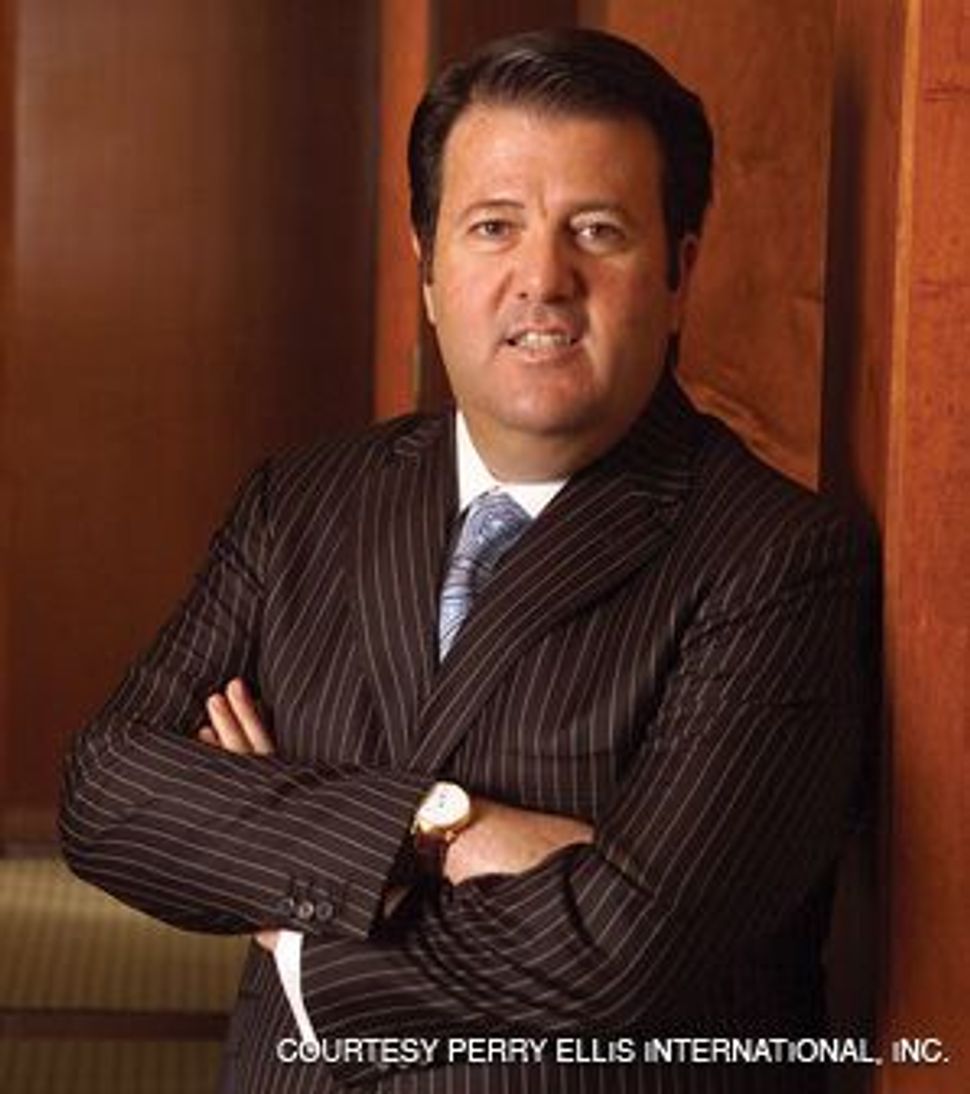 Oscar Feldenkreis, president and chief operating officer of Perry Ellis International, is on a mission that extends far beyond continuing to increase company profits. That is almost a fait accompli for this talented entrepreneur with a strong vision, a creative edge and a passion for his work. Since joining his father, George Feldenkreis, founder of this leading company in men’s apparel, Oscar has taken the company to new heights, expanding product categories, acquiring trademarks, growing the customer base and, in 1993, taking the company public, soaring profits to an unprecedented level. 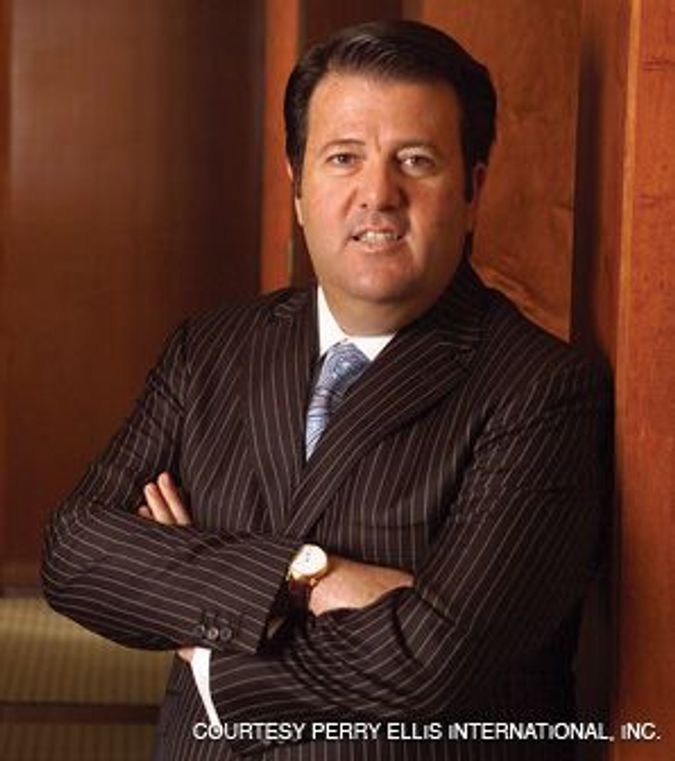 For your average Joe, that would be quite a feat. But Feldenkreis is not average by any means, nor is he one to rest on his laurels. Instead, he works tirelessly to give back to the Jewish community, the State of Israel and various medical institutions committed to research.

After all, that is his family’s heritage. Fleeing communist Cuba when the young Oscar was only 1 year old, his parents found refuge, and later fortune, on the shores of Miami Beach, Fla. His father became very active in the Latin division of the area’s Jewish federation and soon became its president, holding meetings at the family home. Today, the younger Feldenkreis, sitting in his house overlooking Biscayne Bay in Miami, recounts listening to his father at the meetings and participating in the federation dinners as a young boy. He now holds a Cabinet position at the Greater Miami Jewish Federation. And each year he tries to donate more money than the year before.

“Being successful, you have to be able to share, and our family is very big on that — on being able to give back as much as possible,” Feldenkreis said. “We’re very much involved in Jewish causes, where I would say we give a big percentage of our donations.”

Each year, Feldenkreis donates tens of thousands of dollars to Miami’s Jewish federation. He also purchases vast amounts of Israel bonds to help bolster Israel’s economy, and he is contributing to the funding of the expansion of Temple Menorah in Miami Beach. His non-Jewish philanthropic efforts include donations to the University of Miami/Jackson Memorial Hospital.

Feldenkreis contributes to these organizations as a private individual and not on behalf of Perry Ellis, though he is driven to expand the business not so much for his own personal benefit but rather to increase his ability to give. With his philanthropic goals in mind, failure has never been an option for Feldenkreis. In fact, it’s failure that he fears. “I think that businessmen that have that type of fear will always be successful, because they are going to try as hard as possible to make sure that they do not fail,” Feldenkreis said.

Perry Ellis International achieved a great measure of success and expansion under his leadership. When Feldenkreis joined his father’s apparel business in 1979, he started a pants line that he called Feldini, an Italian spin-off of his last name, and he started developing what he calls “the bottom business.” With the same levelheaded practicality that he exuded during our interview, Feldenkreis recognized that the average American consumer did not want to pay $90 to $125 for pants made in Italy. He then realized that there was an opportunity to develop pants manufactured in Korea that made of 100% wool or woolen blends, would sell for only $50 to $70. It was this move that put the company in a relationship with Federated Department Stores, which in its day comprised the large department stores that dominated the apparel industry.

The momentum grew from there. Feldenkreis was responsible for the company’s tremendous growth spurt during the 1990s, with profits rising to $33 million in 1993 from $18 million only a year earlier. He and his father decided to take the company public on the Nasdaq exchange, turning the company’s fortunes, then $33 million, to an astonishing $54 million in one year’s time.

“We started to grow almost 100% every single year,” Feldenkreis said.

In 1996, the company acquired its first true brands, and today it boasts a composite of such familiar labels as Perry Ellis, Manhattan, John Henry, Mundo del Marco, Axis and Treaco St. Rafael, to name a few. Perry Ellis International is also the licensee for PGA Tour Golf and holds the license for all categories of Nike swimwear.

Feldenkreis is always on the move, seeking out new opportunities for his Miami-headquartered company with multiple offices in Asia and on both American coasts. “Our culture is very entrepreneurial. We’re about growth,” he said.

No one can say that Feldenkreis is all work and no play. To the contrary, he can be spotted each Hanukkah in Aspen, Colo., with his wife of 25 years and their three daughters, ranging in age from 19 to 24. “We light Hanukkah candles in Aspen,” he said. The five family members also enjoy boating, and they travel to Europe together during the summers. When at home, they enjoy traditional Sabbath dinners and keep kosher, Feldenkreis said with pride. Having attended Hebrew Academy of Miami Beach, Feldenkreis is a strong believer in passing down Jewish values to his children, who attended Jewish day schools. In fact, he begins each day by donning tefillin.

Feldenkreis is very active at Temple Menorah, a large, well-established Conservative synagogue in Miami Beach. As a board member, he serves on a committee charged with building an updated synagogue and a new social hall. “For the last 20 years, I have been doing the Israel Bonds campaign drive at Temple Menorah,” he said.

Feldenkreis recently ascended the podium as the honored guest of the 2007 Israel Bonds dinner, where he spoke about the complex issues facing Israel today and in the future. “It’s a very troublesome situation,” Feldenkreis said, describing the challenges that Israel faces and the breadth of Israel’s enemies, which, he said, reach far beyond the Palestinians.

His commitment to Israel is well evidenced. From 1989 through 1991, Feldenkreis served as chairman of Miami’s Israel-America Chamber of Commerce, helping businesspeople look for opportunities to import and export products between the United States and Israel.

“I think the biggest issue we have within the Israel-America Chamber of Commerce is that we need more people involved,” he said. “The local Israelis that have been very successful here should be much more involved.”

One of his personal goals is to take a more active role in federation activities.

“I believe as an American Jew that I have to give a big percentage of our commitments to the Jewish federation and support for the State of Israel,” Feldenkreis explained. He urges others to do the same. “The U.S. will continue to support the State of Israel… as long as [it sees] a strong Zionist-American movement for the support of Israel on a philanthropic basis. I think that there is a lot of need for American Jews that are not involved and have the power and the wherewithal to be able to give back to the State of Israel,” he asserted. “I believe that that’s something that we need to work on.”

Giving Back: A Family Tradition