Man of the People of the Book 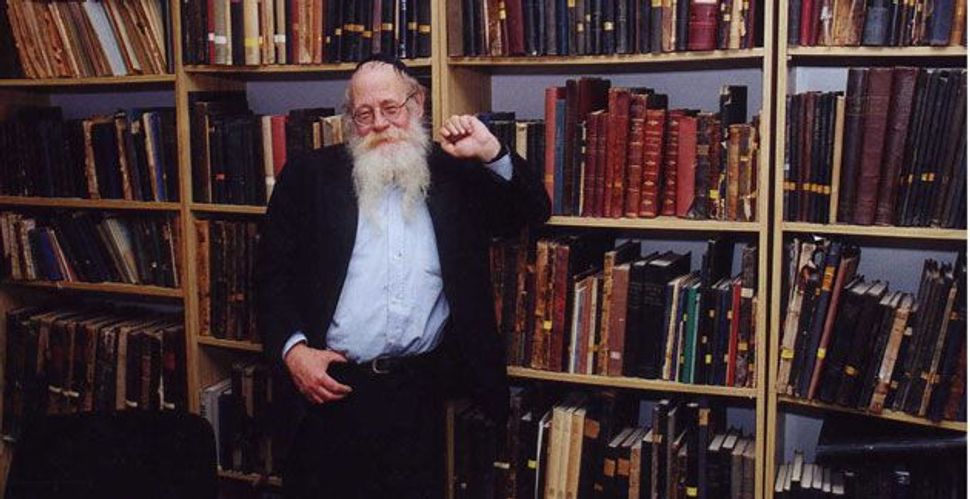 Literary Discipline: Working on the Talmud has kept his writing and intellect grounded, Steinsaltz says. Image by Edgar Asher

Christianity in the English-speaking world changed forever 400 years ago. With the release of the authorized version of the King James Bible in English, Scripture became radically more approachable.

As Christians recently began celebrating the anniversary of this text, in Jerusalem a quirky, secular-born Orthodox rabbi completed a translation project of similar magnitude for Jews — rendering a crucial body of writing into an accessible text in the local vernacular.

Some 45 years after he started out, Adin Steinsaltz has completed the first ever translation of the Talmud into Modern Hebrew.

“The main point was that we have something which is enormously important for us Jews, enormously important because it’s the main factor of our existence as a people, but it was practically closed for most of the people,” he said during an interview in his Jerusalem office shortly after his forty-fifth, and final, volume went to press.

The Talmud, the central text of rabbinic Judaism, is comprised of the Ancient Hebrew Mishna interspersed throughout the Aramaic Gemara. For a speaker of Modern Hebrew, trying to read this is the equivalent of an English-speaker reading Shakespearean English followed by long chunks of French. French and English, like Hebrew and Aramaic, share an alphabet and some words, but knowing one doesn’t ensure you’ll understand the other.

Translating all 2,711 pages sounds like a grand achievement, but the word “translation” actually underplays what Steinsaltz has managed.

When he started out in 1965, the only widely available Talmud was the traditional Vilna edition, with the unvoweled and unpunctuated text of the Talmud running down the middle and commentaries in Rashi script around it. Even reading the words, second nature to seasoned scholars, was near impossible for others.

Adding vowels and punctuating the text, Steinsaltz, now 73, made sure that anyone who knows Hebrew can read it. He then added, in a column on the outside margin of each page, his translation in straightforward everyday Hebrew. But when it comes to Talmud, reading the words and understanding them isn’t enough, so he added a commentary that draws on modern science and sometimes even includes a diagram to explain the often-obscure ancient wisdom.

Teams of scholars at the Israel Institute for Talmudic Publications and Milta Books — organizations he founded to disseminate his books — started translating Steinsaltz’s volumes from Hebrew into English long before the U.S.-based ArtScroll began its English Talmud, and the volumes have since been translated into Russian, French and Spanish.

For anybody who has studied from Steinsaltz’s volumes, meeting him can be quite a shock. The Steinsaltz on the page is brief, succinct, and sometimes even terse. The Steinsaltz who sits at his desk, puffing on his pipe while letting his tea go cold, responds to questions with long, winding answers, shooting off on tangents along the way. There is even a diversion before we start: His warm and non-egocentric nature means that he insists on interviewing this interviewer before talking about himself.

This contrast, he admits, is no coincidence. “This work was in many ways to keep myself in rein,” he said, explaining that it disciplined his writing style and his intellectual direction.

Steinsaltz has a broad range of interests — he has even written detective novels — and felt when embarking on the project that it was a good way to keep his feet on the ground. “A person like me… sometimes has the temptation of trying to write things that are astonishing, astounding [and] novel and so on,” he said. “Working on this kind of thing you are far more thinking about the readers, whoever they are, than you are thinking about what I can do to glorify myself.”

Reflecting on the past five decades, he said that one of the biggest challenges has been responding to the changing needs of those who study Talmud and coming up with a translation and commentary that satisfy the modern, curious mind. “The Talmud mentions a name or an object — what is it? This question possibly for my great-grandfather wasn’t a problem — It was a vessel or it was a tree or it was an animal, and that was enough. In our times, you won’t be pleased if you are only told it’s an animal.” Providing this kind of information took him to some pretty unlikely places for a Talmudist, including a long conversation he recalled with a top Israeli expert on fowl.

His second challenge, in the course of opening up the Talmud to the uninitiated, was to explain the various expressions that form the basis of Talmudic logic. In the past, commentators assumed that people had learned at heder the hermeneutical rules around which the text is structured. Today, one cannot assume, for example, that kal v’chomer, a rabbinic rule for drawing an inference from one case to another, is a meaningful concept to a Jewish reader of the Talmud.

A third challenge for Steinsaltz was to confront some of the ethical questions regarding the Talmud and its style that are specific to modern readers. One arises from the fact that the Talmud constantly tries to harmonize apparently divergent scholarly opinions. “Is this harmonization fair? That you push two people together when they are really not in agreement? It would be much easier to say, ‘Okay, they have two different opinions and let them go as they are.’ All the Talmud is a big attempt at harmonizing. So this is a question that possibly my great-grandfather didn’t ever think about.”

Beyond these challenges in the writing process itself, Steinsaltz found, in the course of his work, that his reputation was under attack in the Orthodox community, where he was criticized for changing the hallowed layout of the Talmud and giving scriptural interpretations that some deemed disrespectful to Biblical figures.

Today, his opinions still raise eyebrows in Haredi yeshivas. For his entire mission runs counter to the received wisdom that learners must become familiar with Aramaic vocabulary and that this linguistic facility is a key part of the holy endeavor of study. He described this as a “not important part” of study, saying that using his translations students can save “all kinds of extra work,” which is really just “a preparation” for exploring the content.

But nowadays, the Haredi establishment mostly leaves him alone — a far cry from the 1980s and 1990s, when he was deemed a subversive and declared public enemy number one. The controversy climaxed in 1989, when several influential rabbis — including the most powerful Orthodox rabbi of the day, Eliezer Shach of Bnei Brak, who had branded Steinsaltz a heretic — banned his books.

This was the same year that he released his first English volume of the Talmud. Steinsaltz suspects that some Orthodox leaders wished to discredit his Talmud because ArtScroll, which the establishment admired, was to start publishing its own English translation — an “imitation” — the following year. “There was a time when I was possibly blamed for any crime in the world, and it had nothing to do with my work… It was possibly done somehow with other people that wanted to clean the slate.”

It is widely believed that part of the Orthodox establishment’s dislike for Steinsaltz arose from the fact that he appeared from nowhere. He grew up in a secular Zionist family with strong trade union involvement in pre-state Palestine and became Orthodox of his own accord just before his bar mitzvah. But Steinsaltz thinks the establishment could have accepted his background if he were more of a people person. He was targeted because he is “not gregarious” — he neither networked nor cultivated the right people.

Countering the common Haredi claim that he is giving people false confidence in the Talmud by allowing them to dip into it and read it instead of struggling over every line, he said that he always urges readers to do justice to the depth of the text. His aim is “to open a door to Talmud study, show people in and then let them do the work.”

Steinsaltz said that he is “stubborn” and won’t be put off future projects because of the controversy he encountered during this one. He hinted that he may be interested in working on the Jerusalem Talmud (1,554 pages) — which he has long considered to be unfairly overlooked. Aptly, discussing his plans for the future, he borrowed from the Mishna, citing Rabbi Tarfon: “We are not obliged to finish the task, but we are not free to desist from it.”

Man of the People of the Book