The Secret History Of Jewish Metal 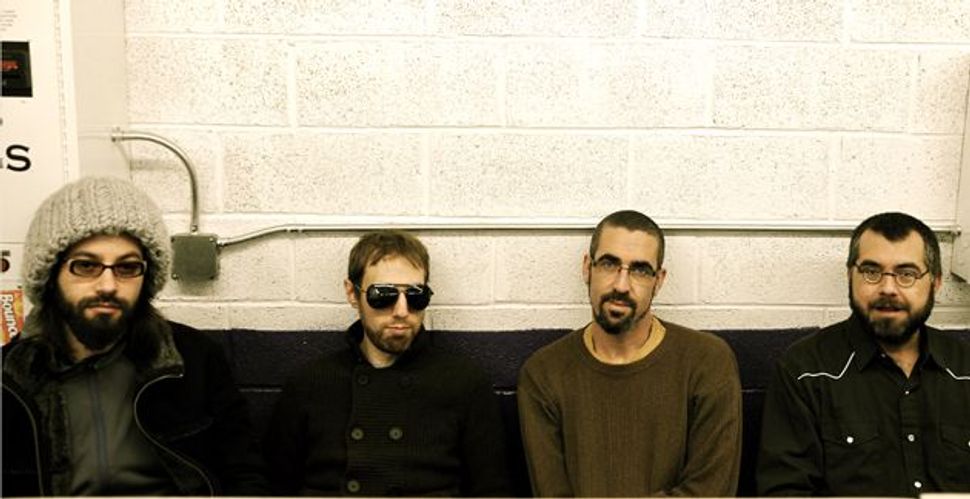 Unrepentant: Yoshie Fruchter, second from left, with his band Pitom, posits an uncertain universe where the penitent may not be forgiven. Image by courtesy of yoshie fruchter

Mention of heavy metal music may bring to mind satanic rituals, church burnings and members of the 1980s glam-metal band Ratt sporting shoulder-length hair. If Yom Kippur gets a look in, it’s only because you’ve decided to repent for head-banging so hard to Slayer that your yarmulke fell off. Destined to change that, a number of Jewish artists are delving into the dark metal arts and mining 50 years of heavy metal for inspiration in their own work.

Unlike such Israeli bands as Orphaned Land and Salem, which pioneered their own brand of Middle Eastern folk metal in the mid-’90s, artists such as Tzadik’s Jamie Saft and the Yiddish metal band Gevolt crib extensively from unlikely genres, like Scandinavian black metal and Neue Deutsche Härte (New German Hardness), a sometimes controversial German brand of industrial metal. Rather than shy away from the often intense and aggressive sounds associated with the genre, they harness them for their own projects, unleashing a secret Jewish history of fury, angst and conflict.

With Pitom’s new album, “Blasphemy and Other Serious Crimes,” guitarist and composer Yoshie Fruchter draws on the sludge-and-doom metal sounds often associated with labels like Southern Lord and bands like New Orleans’s Eyehategod to create a concept record about repentance, sin and uncertainty.

“Some people would consider this music blasphemous,” Fruchter told the Forward. Fruchter, who was raised as, and remains, an observant Orthodox Jew, recognizes that some of his musical influences are beyond the scope of traditional Jewish music. Mashing cantorial and klezmer music with jazz and sludge — a slow tempo atmospheric form of the doom metal sound — “Blasphemy” has allowed him to unsettle his religious identity. “When I grew up, there were just certain things that you didn’t do,” he told the Forward. “This album is about a point in my life now where I am doing some of them.”

Fruchter is vague about what those things might be, and an amorphous uncertainty creeps through the album. On the title track, Pitom’s violinist — the remarkable Jeremy Brown — tremulously cuts and swerves through a repetitively bleak guitar line. Though the album is entirely instrumental, the violin sounds like a lyrical counterpoint. Instead of simply evoking a nostalgic klezmer history, Brown assumes the erratic voice of an ambivalent penitent.

Like the rest of the album, the track is undergirded with the possibility that the metal will overwhelm the Jewish, and that chaos will consume the sinner. In many other Jewish genre exercises, it is always clear that the music will ultimately end up somewhere safe, having successfully navigated the other genre, be it reggae, or punk, or metal. “Blasphemy” does not make a similar promise.

By the album’s finale, “Azazel,” a track referencing the Temple goat sacrifices of the Day of Atonement, Fruchter has evoked a character rarely seen in Jewish liturgy: The penitent who may not be forgiven. In the Temple era, the goat was tied to a rock and thrown off a cliff. Observers were supposed to watch and imagine themselves as the goat. In that way, Azazel would become a surrogate for the sinner, and his punishment would absolve the Jewish people of their own sins. On the track, that conclusion is not foregone, and the guitars sound as heavy as stones. It seems as if Fruchter is asking, “What if a surrogate is not enough?”

Fruchter is the best person to ask that question. On one hand, he is the ultimate religious insider. He grew up in a religious household in Silver Spring, Md., and has lived out his religious dilemmas in the public eye. Articles in The New York Times in 2008 have discussed his trials with keeping kosher and the Sabbath and his relationship with Leah Koenig, Forward’s food columnist. At the same time, he is greatly influenced by the urban avant-garde and is a part of John Zorn’s record label, Tzadik, which supports and publishes some of the most radical and edgy music being made today. “His term ‘radical Jewish culture’ is perfect,” Fruchter said. “It has created this scene and umbrella where all this [music] could happen.”

Tzadik and its Radical Jewish Culture imprint have created a bizarro world of Jewish music where traditional sounds are unsettled, and where unexpected influences and compositions come to the fore. Jamie Saft’s own black metal opus was released on the label, and it is host to a variety of critically well-received acts: A cappella world project Charming Hostess, Jon Madof-fronted power trio Rashanim and vocally innovative Meredith Monk-inspired Ayelet Rose Gottlieb have all released albums on it. Tzadik is a place where Fruchter can cite Hasidic nigunim and cantorial services as his primary influences next to Frank Zappa, Washington State grunge-pioneers the Melvins, progressive rock innovators King Crimson and British grindcore band Napalm Death. But it’s also a place that unsettles our preconceptions about how we should be Jews in the world today. Albums on the label are often dizzying and explosively creative, but their power comes from their ability to destabilize traditional visions of Judaism.

On “Blasphemy,” Fruchter has done no less than undermine the very concept of teshuvah, or repentance, so pivotal in Jewish expression and experience. He posits a universe of uncertainty and fear where we are always begging for forgiveness and — sometimes — left unforgiven. Staked out in the midst of metal, a genre more commonly associated with anti-religious sentiment, Fruchter’s album is ultimately a stunningly and unexpected religious artifact. We are distant from God, and we are troubled, and we are lost, and redemption is very hard to find. It is a vision of life and religion far more terrifying than any devil horns, and darker than the blackest Scandinavian metal.

“Playing music, and playing specifically this music, is like prayer when you’re not in the synagogue,” Fruchter said. Like the most moving prayer experiences, it is unpredictable, inchoate and primordial. It can be terrifying.

Mordechai Shinefield has written about music for Rolling Stone, Spin Magazine and the Village Voice.

Listen to the track In the Merit of… from Pitom’s new album, “Blasphemy and Other Serious Crimes”

The Secret History Of Jewish Metal