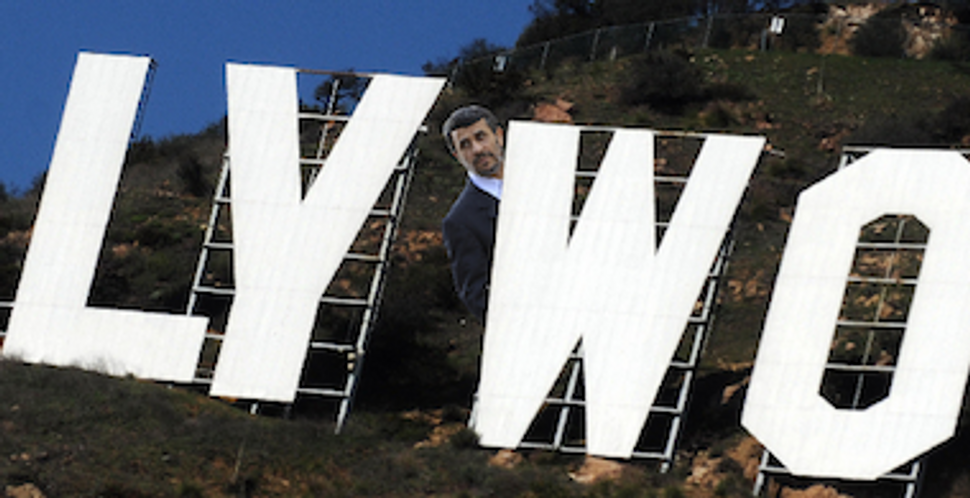 LOS ANGELES — It appears that years of unflagging effort, dire warnings and sanctions may all have been for naught. Hollywood insiders are warning that the Islamic Republic of Iran has acquired both the materials and technological wherewithal to launch a motion picture guaranteed to bomb catastrophically worldwide.

High-ranking officials in the motion picture industry are revealing that they are “90% certain” that Iranian agents have infiltrated all the major movie studios, armed with the means to turn any production into a bomb so bankrupt of creative and commercial merit that it could single-handedly devastate Hollywood, wiping out the livelihoods of millions of Jews.

“Hollywood has always been the promised land for Jews who don’t like shul,” said one studio head, who asked not to be named because he didn’t want his Jewish colleagues to know he was Jewish. “The thought that this could all disappear is terrifying.”

It is a chilling scenario. Intelligence analysts have suggested that this may have been what Iranian President Mahmoud Ahmadinejad was referencing when he warned that Jews could soon suffer a disaster tantamount to a “first Holocaust.”

Israeli officials are said to be terrified of the repercussions.

“Without Los Angeles, where will all our young people move to?” asked Minister of Internal Affairs Eli Yishai.

The movie bomb would be only the latest salvo in the long-running battle between Iran on one side and the alliance of Israel and the U.S. on the other. Last summer, Iran’s attempts to build a nuclear device were crippled by the Israeli-designed StuxNet virus. The virus sent Iran’s nuclear lab into chaos, automatically shutting down key machinery from Friday to Saturday evenings, and causing centrifuge cycles that were designed to last for only one night to continue for eight full nights.

Some Middle East analysts argue that Iran’s planned strike is intended as retaliation for the syndication of “Jersey Shore” on Iranian state television.

Meanwhile, paranoia in Hollywood has increased, as studio executives strain to pinpoint potential moles. These studio executives warn that despite their vigorous efforts to ensure that only the most well-crafted cinematic products make their way into theaters, it is impossible to guarantee that a sub-par movie won’t slip through.

for sure that I’d identified a radioactive plant — a romantic comedy-horror-thriller movie about a camp of teenage girls who have to lose their virginity to a lacrosse team of vampires so they can ward off an attack of zombies. But then I found out it was my idea.”

It appears that Iranian agents have penetrated deep within the Hollywood system, infiltrating marketing departments, financing companies and executive suites across town. The CIA reports that Iranians have developed technologies cunningly disguised as ordinary elements of the development process: hackneyed story lines, insistence on casting a producer’s girlfriend, incomprehensible script notes and, of course, sequels.

Although American intelligence agencies say they are actively pursuing leads, movie executives privately acknowledge that the only question now is not if but when the bomb will be released. Some believe the film could be launched as a summer action movie, luring millions of innocent teenage boys through posters showing guns and cleavage. Others maintain it will be a holiday romantic comedy about hectic families and lying white people. A number of knowledgeable insiders point to the upcoming release of “The Green Lantern.”

Some desperate Hollywood players have pleaded with Iran for mercy. “A few of these cinematic bombs could rupture the sacred bond of trust between Hollywood studios and American audiences,” said movie mogul Harvey Weinstein. “Once that trust is ruptured, it may never be recovered.”