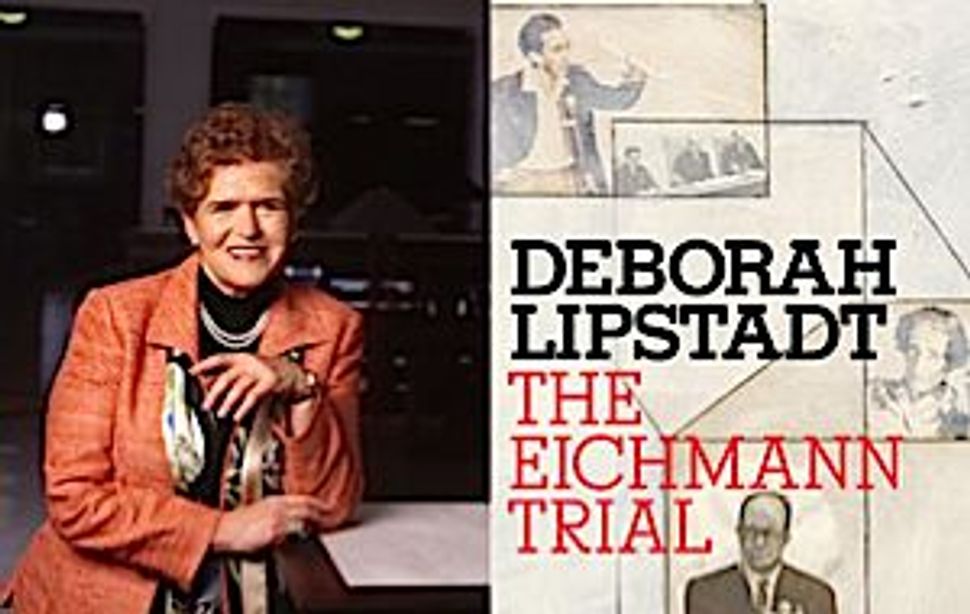 Challenging Arendt: Deborah Lipstadt, the author of ?The Eichmann Trial.? Image by Nextbook/Schoken

In 1961, the young state of Israel tried and executed the Nazi war criminal Adolf Eichmann. Hannah Arendt covered the trial for the New Yorker, an account that was published in 1963 as “Eichmann in Jerusalem.” Arendt did not set out to write a journalistic trial narrative. Instead, she articulated a series of provocative and critical judgments about the trial, the wartime role of Europe’s Jewish Councils (the infamous Judenrats) and Eichmann’s motives. The book ignited a firestorm of controversy that, 50 years later, still crackles. Her book remains the lens through which people view the Eichmann trial. 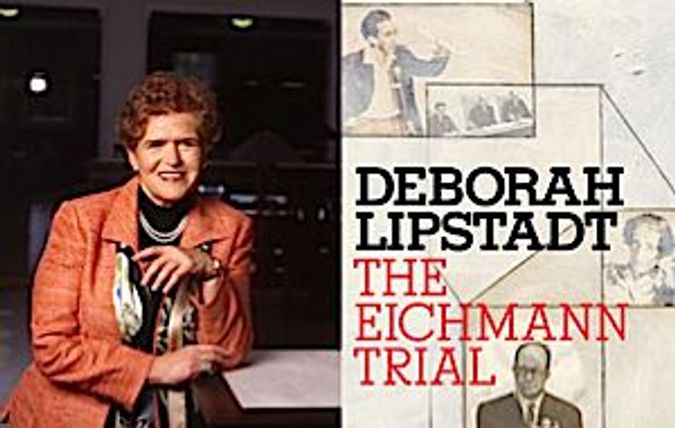 Challenging Arendt: Deborah Lipstadt, the author of ?The Eichmann Trial.? Image by Nextbook/Schoken

With her new book, “The Eichmann Trial,” historian Deborah Lipstadt attempts to refute Arendt’s main arguments. On the cover is an iconic image of Arendt — pearl-bedecked and pensive, a cigarette dangling from her fingers — and an entire chapter of the book discusses her arguments. Although other scholars have re-examined the Eichmann trial — most notably the Israeli historian Hannah Yablonka, in a book published in English in 2004 as “The State of Israel vs. Adolf Eichmann” — Lipstadt aims to reach a wider audience.

Especially when compared to Arendt, who was more concerned with the whys and wherefores than the whats, Lipstadt has written a reliable guide to the basic facts of the trial. Lipstadt succinctly describes the key events in chronological order: Israel’s abduction of Eichmann in Argentina; the selection of the prosecutor, defense attorney and judges; the media response to the trial; the prosecutor’s chilling opening statement; the testimony of the survivor witnesses; Eichmann’s testimony; the judgment and the impassioned debate over the death sentence.

Arendt bitterly criticized the Jewish Councils for helping the Nazis compile lists of Jews to be deported. This observation was the one that sparked the violent outrage in American Jewish circles because of her insinuation that the Nazi authorities and Jewish Councils were equally culpable. Lipstadt vehemently challenges Arendt’s argument, noting that the Einsatzgruppen murdered thousands of Jews in the Soviet territories, which had no Jewish Councils. In her mind, this proves that Arendt exaggerated the importance of the Jewish Councils.

True. But Lipstadt has the advantage of 50 years of historical research, much of which was spurred by Arendt’s provocative argument. And, ironically, Lipstadt’s narrative ultimately persuades me that Arendt’s spotlight on the actions of the Jewish Councils was justified at the time. Lipstadt vividly describes how, during the testimony of a Hungarian Jewish Council member, Pinchas Freudinger, a spectator began shouting and accused Freudinger of being responsible for the death of his family. It was a Holocaust victim in the courtroom who accused the Jewish Councils of moral culpability. Arendt’s contribution was to analyze a complicated moral issue — raised by a Holocaust victim at the trial — with her characteristic erudition, seriousness and fearlessness.

Arendt’s book is most notorious for its portrait of Eichmann’s motives. Based on her analysis of his statements and testimony, Arendt contended that Eichmann was not motivated by a fanatical hatred of Jews. Other than a desire to advance his career and obey his superiors, he had no real motives at all, she maintained. Arendt concluded that Eichmann’s “sheer thoughtlessness” revealed the “banality of evil.”

Lipstadt argues that, to the contrary, Eichmann was a committed anti-Semite. Sometimes Lipstadt’s prose has the whiff of a dogmatic rant; but she also marshals some compelling evidence, some of which was not part of the trial and hence not available to Arendt. She points to Eichmann’s speech to his men, in which he declared he would go to his grave fulfilled because he had murdered millions of Jews. Lipstadt also invokes as evidence a memoir written by Eichmann during the trial, which was sealed in Israel’s archives but released to assist Lipstadt in her own trial in 2000 against Holocaust denier David Irving.

Though she doesn’t provide details, Lipstadt contends that the memoir proves that Arendt “was just plain wrong about Eichmann.” In a fascinating description of Judge Benjamin Halevi’s questioning of Eichmann, she also recounts how Eichmann compromised his defense that he was just following orders by admitting he exempted several Jews from deportation.

Even if Lipstadt is correct about Eichmann — and in his 2004 biography of Eichmann, historian David Cesarani precisely documented Eichmann’s anti-Semitism — Arendt was still onto an important idea. The bloody post-Holocaust history of genocides provides ample evidence of the “banality of evil.” Some very chilling evidence appears in the book “Machete Season,” by French journalist Jean Hatzfeld. Hatzfeld conducted extended interviews with a group of imprisoned Rwandan genocidaires. Throughout the book, they speak of the killing as a business and a job, without any reference to moral considerations.

In her conclusion, Lipstadt argues that the decision by the prosecutor, Attorney General Gideon Hausner, to include survivor testimonies, despite no direct legal need for it, was the most important aspect of the trial. Drawing on the empirical work of other scholars, she argues that, by allowing victims to tell their stories publicly, the trial changed the perception and status of Holocaust victims in Israeli society. In Lipstadt’s mind, this was the trial’s greatest legacy. Her conclusion also challenges an Arendtian judgment. Arendt had criticized Hausner for injecting political goals into the trial. She specifically criticized the focus on Jewish suffering and the victim testimonies: “For this case was built on what the Jews had suffered, not on what Eichmann had done,” she lamented.

Arendt’s view was based on a doctrine — which she made explicit — about the purpose of trials, even trials of war criminals. “The purpose of a trial is to render justice, and nothing else,” she maintained. By defending the trial on the grounds that it integrated victims into Israeli society, Lipstadt assumes that war crimes trials can and should further more expansive goals, such as the political objective of nation-building. Since the Eichmann trial, in the wake of the bloody conflicts of the 1990s, war crimes trials have proliferated. Modern human rights groups have defended these trials on the grounds that they further classic political goals, such as peace and democratic consolidation.

Our contemporary discussions about what law scholar Ruti Teitel named “transitional justice” are often muddled, because there is little explicit philosophical debate — let alone consensus — about the appropriate goals and standards by which such trials should be assessed. This conceptual miasma might be one reason there are so few empirical studies on the impact of war crimes trials. This is a shame, since these trials are a tremendous experiment in virtuous politics. Arendt criticized the Eichmann trial because it injected politics into law. By defending the trial because of its political consequences, Lipstadt lays out an alternative doctrine. Who’s right? For anyone concerned about the legacy of Eichmann and the future of war crimes trials, it’s an essential question.

Michelle Sieff is a research fellow at the Yale Initiative for the Study of Antisemitism.