The Commentator: Is Adam Sandler Our Greatest Jewish Mind? 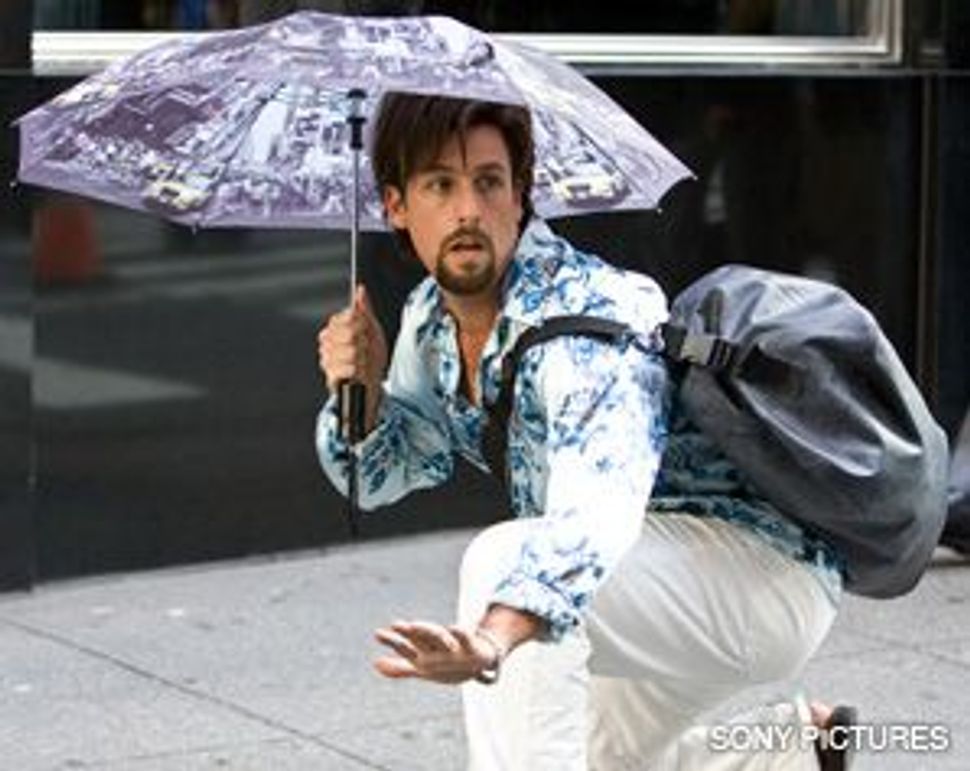 READY FOR ACTION: Adam Sandler in ?You Don?t Mess With the Zohan.?

Is Adam Sandler the most important living Jewish commentator? Believe it or not, this actually isn’t the first time those words have appeared in print. In fact, the question was posed way back in 1999, on the cover of the national Jewish student magazine New Voices. 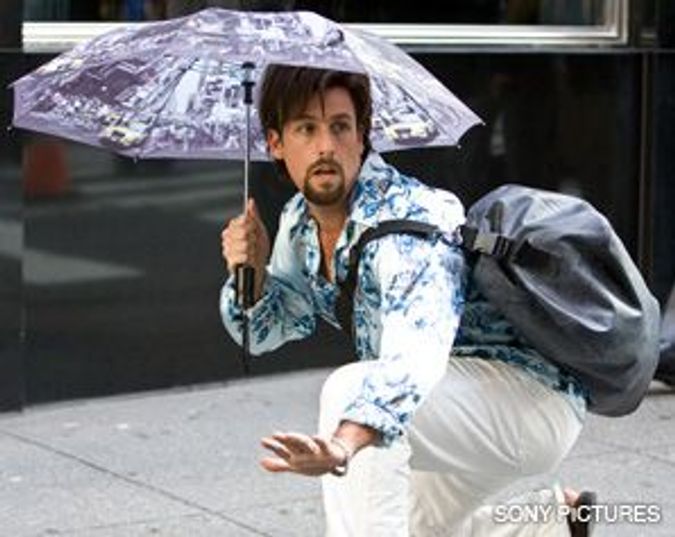 READY FOR ACTION: Adam Sandler in ?You Don?t Mess With the Zohan.?

At the time, I must confess, I thought it was an absurd question. After all, Sandler’s brand of humor isn’t particularly Jewish, owing more to the bathroom than it does to the Borscht Belt. What can a guy who made his name singing faux-operatic ditties on “Saturday Night Live” and punching out “Price Is Right” host Bob Barker in “Happy Gilmore” teach us about the Jewish condition? Not much, I thought.

Yes, that “50 First Dates” — the 2004 slapstick comedy in which Sandler woos an amnesiac Drew Barrymore. True, in contrast to other films that tackle the perennially funny subject of Jewish men pursuing the affections of non-Jewish women (think Woody Allen in “Annie Hall,” or Billy Crystal in “When Harry Met Sally”), there’s nothing recognizably Jewish about the protagonist of “50 First Dates.” Sandler’s character lives in Hawaii, of all places, and works as a marine veterinarian, of all things. Aside from his name, Henry Roth, there’s not so much as a hint that the character is Jewish — until, that is, the movie’s ending, when (spoiler alert!), completely out of the blue, Sandler is standing under a chupah, sporting a yarmulke and a tallis.

The sudden appearance of a traditional Jewish wedding canopy and ritual garb is treated with utter nonchalance. Now, some might find this jarring, but I would counter that it brilliantly reflects the zeitgeist. To be an American Jew today is to be, like Sandler, a part of the mainstream, not apart from it. In our daily lives, most of us are not so different from our non-Jewish neighbors. (Unlike in “Annie Hall,” none of Sandler’s 50 dates involved taking Barrymore to see “The Sorrow and the Pity.”) At the same time, we’re not abashed when it comes to expressing our Jewishness. Getting hitched under a chupah is no longer so exotic. That’s why, I would humbly argue, “50 First Dates” may very well be the single most accurate cinematic depiction of contemporary American Jewish identity.

Nor is Sandler’s contribution to Jewish culture limited to the silver screen. He’s also responsible for the single most important Jewish song of the past quarter-century. Seriously, is there a Jewish song in the post-“Fiddler on the Roof”/“Jerusalem of Gold” era that is as widely beloved by Jews and non-Jews alike as Sandler’s “Hanukkah Song”? The song also represents a revolution in Jewish self-assertion. As critic J. Hoberman has noted, “Sandler’s open cultural narcissism — identifying a ‘list of people who are Jewish just like you and me’ on national TV without fear that this might be a problem — dispensed with the underlying subject of American Jewish comedy. Say it loud. No more anxious self-deprecation. Just the slightest bit of irony!”

For these reasons, I had high hopes for Sandler’s latest film, “You Don’t Mess With the Zohan,” in which he plays a cracker-than-crack Israeli commando who leaves his conflict-ridden homeland to pursue his dream of being a hairstylist in New York City.

“You Don’t Mess With the Zohan” is a stupid movie; I couldn’t stop laughing. And if you look beyond the gross-out humor about intergenerational intercourse and gratuitous animal cruelty gags that dominate much of the film, “You Don’t Mess With the Zohan” also happens to be a pretty spot-on send-up of Israeli cuisine and culture, manners and mores.

The movie conveys the national obsession with hummus (which the Zohan uses as a hair-care product, toothpaste and fire-retardant), the wild popularity of cheesy dance music (a disco beat is all it takes to get the crowd at an Israel vs. Lebanon Hacky Sack tournament grooving together), the sabra directness that can occasionally veer into crudeness (much of the Zohan’s well-intentioned salon banter shouldn’t be repeated in a family newspaper) and the pushy salesmanship of Israeli electronics merchants (a clerk at a store named “Going Out of Business” insists that there’s nothing wrong with an obviously broken piece of audio equipment, suggesting instead that something might be wrong with the customer’s ear).

No mainstream American film has ever delved so deeply (or so shallowly, as the case may be) into such everyday attributes of modern-day Israeli-ness. (For those worrying that Sandler is tarnishing Israel’s image abroad, fear not: The film’s Arab characters don’t come off any better. So it’s a tie.)

Because its protagonist is a war-weary Israeli operative who finds a multicultural refuge in New York City, “You Don’t Mess With the Zohan” has drawn comparisons to Steven Spielberg’s Oscar-nominated drama “Munich.” The New York Times calls Sandler’s Zohan “basically a less anguished version of the character played by Eric Bana in ‘Munich.’” It’s not, however, an apt analogy. For starters, Bana’s character couldn’t catch a speeding bullet with his nostril or immobilize foes by tying them into pretzel shapes, let alone make elderly women’s hair look “silky smooth.”

More broadly, Spielberg’s “Munich” had remarkably little to do with Israel as it actually is. The film grafted a cautionary post-9/11 warning about the dangers of retaliation onto a storyline inspired by the Mossad counterterrorism efforts in the wake of the 1972 Munich Olympics massacre, cavalierly rewriting history to suit its thesis.

Granted, “You Don’t Mess With the Zohan” also dabbles in simplistic moralizing, the message being that Israelis and Arabs are really the same — so why all the fighting? The film even comes complete with a Palestinian love interest for the Zohan. But at least “You Don’t Mess With the Zohan” doesn’t do violence to the historical record (any resemblance to actual events or persons — with the exceptions of Mariah Carey, John McEnroe and George Takei, who play themselves — is, it seems safe to say, strictly accidental). And who really goes to an Adam Sandler film for the purpose of being educated in the nuances of the Israeli-Palestinian conflict?

Sandler’s strong suit isn’t politics — it’s sociology. And “You Don’t Mess With the Zohan” manages to perfectly capture Israel’s complicated national mood — the deep-rooted patriotism on the one hand, and the fatigue from the ongoing conflict on the other. “I love my country, but the fighting, it never ends,” the Zohan explains to a pair of shaggy dogs with which he is sharing the cargo hold on a trans-Atlantic flight.

“You Don’t Mess With the Zohan” may aim low, but it also rings true. Then again, I wouldn’t expect anything less from the most important living Jewish commentator.

The Commentator: Is Adam Sandler Our Greatest Jewish Mind?