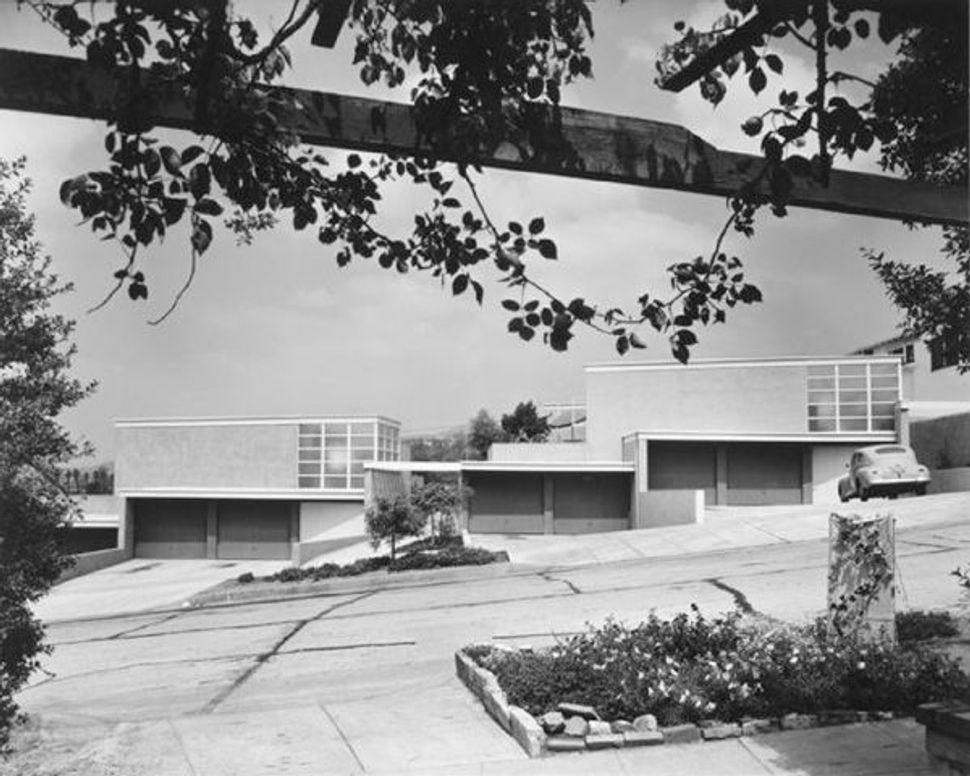 Julius Shulman is arguably the greatest architectural photographer of all time. His 77 years as a professional photographer coincided with the rise of Modernism in Los Angeles and its transformation from city to megalopolis — a coincidence that enabled Shulman to create an unparalleled visual chronicle of Los Angeles in the 20th century. He became the photographer of choice for the greatest architects in the city, including Richard Neutra, Rudolph Schindler, Gregory Ain, Rafael Soriano, John Lautner, Victor Gruen, Pierre Koenig and countless others. Today, at 97, he is still photographing the works of such well-known contemporary architects as Frank Gehry and Thom Mayne.

Shulman was born in 1910, into an Orthodox, Yiddish-speaking family in Brooklyn. By 1920, his family moved to Los Angeles’s Jewish neighborhood on Temple Street. His father opened a “New York-style” dry-goods store on the same street, but soon relocated the shop and the family to Brooklyn Avenue in Boyle Heights, the growing center of a large Yiddish-speaking community. Shulman joined the Boy Scouts, roamed the hills and plains surrounding the modest city — where he developed a life-long love for the outdoors — and continued to live in Boyle Heights even after the Jewish community had begun its march westward to the Fairfax District, West Los Angeles and the San Fernando Valley.

But in a recent discussion in his studio at the top of Laurel Canyon, Shulman refused to acknowledge the relevance of his Jewish identity. As he showed me a ream of guest comments from his solo exhibition at the Palm Springs Desert Museum, he pointed out one plaudit in particular. “It doesn’t say, ‘Bravo to the Greatest Jewish Photographer,’ just ‘Greatest Photographer,’” he said. “So, what do you think of that?”

And yet, when the list of players in the transformation of Los Angeles living is compiled — architects, clients and, yes, everyone’s favorite architectural photographer — one cannot ignore the overwhelming Jewish presence.

For starters, there are Shulman’s own career beginnings. His sister Shirley and her husband had a pharmacy in Silver Lake where Neutra’s wife shopped. At Mrs. Neutra’s request, Shirley rented a room to a new apprentice working for the architect. Around the same time, Shulman had returned from Berkeley where he had spent three years, by his own admission, “bumming around.” The apprentice took Shulman to see a Neutra house under construction, and Shulman snapped and printed some photos of the house. When Neutra saw the photos, he asked to meet Shulman, told him that he should become an architectural photographer and hired him to take more pictures of his work. That same day, Neutra also introduced the budding photographer to a colleague, Soriano, who would become Shulman’s lifelong friend. Although it’s almost never discussed, both Neutra and Soriano were Jewish, as was Schindler. Neutra and Schindler were both Austrian Jews who left for America to work for Wright, while Soriano was an Italian Jew from Rhodes.

The connections do not stop there. According to Shulman, in the 1930s he brokered a commission for his friend Soriano and the Soto-Michigan Jewish Community Center in Boyle Heights. Shulman was on the building committee of the center, but only because he led its scout troop and had become friends with the center director. Thanks to scouting, Soriano’s steel post and beam frame and glass sheet windows became a landmark in the neighborhood and may even represent the first time an American Jewish institution chose modern architecture.

Finally, many of the generation’s most important architectural clients were also Jewish. Philip Lovell, a popular Los Angeles Times columnist, commissioned two homes whose designs were enormously influential on the shape of housing to come. (Born Morris Saperstein in New York, he transformed himself into Lovell by moving to the West Coast, where he became a champion of health through exercise, vegetarianism, nude sunbathing and other prototypical Los Angeles habits.) Many other commissions were placed by middle-class and upwardly mobile Jewish clients who were looking for alternatives to the architecture of their fathers and grandfathers. Others, mostly Jews, were communists and socialists attempting to literally build a new form for the world through modern architecture.

When I pointed out to Shulman that almost all the characters in his stories are Jewish, the famed photographer took note. “That’s Jewish geography!” I told him. He laughed, for the first time in our conversation, and I think he finally got my point.

Aaron Paley is founder and chair of Yiddishkayt Los Angeles and president of Community Arts Resources.

Julius Shulman is one of the featured speakers at Nextbook’s “Jewish Geography” festival of ideas, to be held at the University of California, Los Angeles campus June 29. For a complete festival schedule, see www.nextbook.org.