Monumental Epic ‘Soldiers’ Into N.Y.: ‘Die Soldaten’ To Be Staged at Armory 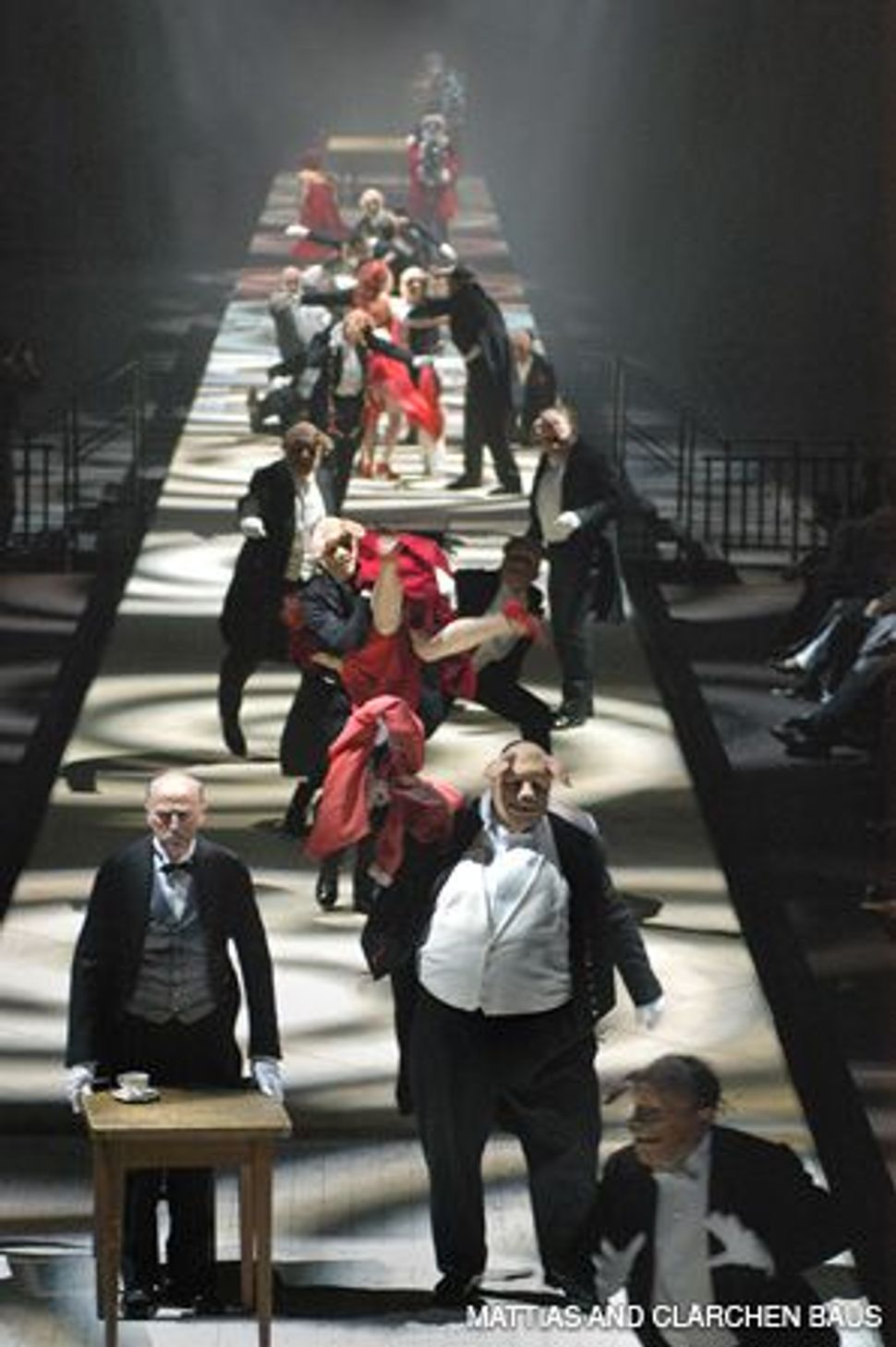 HOG WILD: The production originated at the RuhrTriennale Festival in Bochum, Germany.

This summer, from July 5 to July 12, the Festival at Lincoln Center for the Performing Arts will present a massive production of the strident, atonal German opera “Die Soldaten” (“The Soldiers”) by Bernd Alois Zimmermann (1918-1970). This work, composed from 1957 to 1964, is so vast that it will be performed in Manhattan’s Park Avenue Armory (www.armoryonpark.org), between East 66th and 67th Streets. The Armory boasts a Drill Hall measuring about 200 feet by 300 feet, with an 80-foot-high barrel-vaulted ceiling, and every inch will be required for “Die Soldaten.” 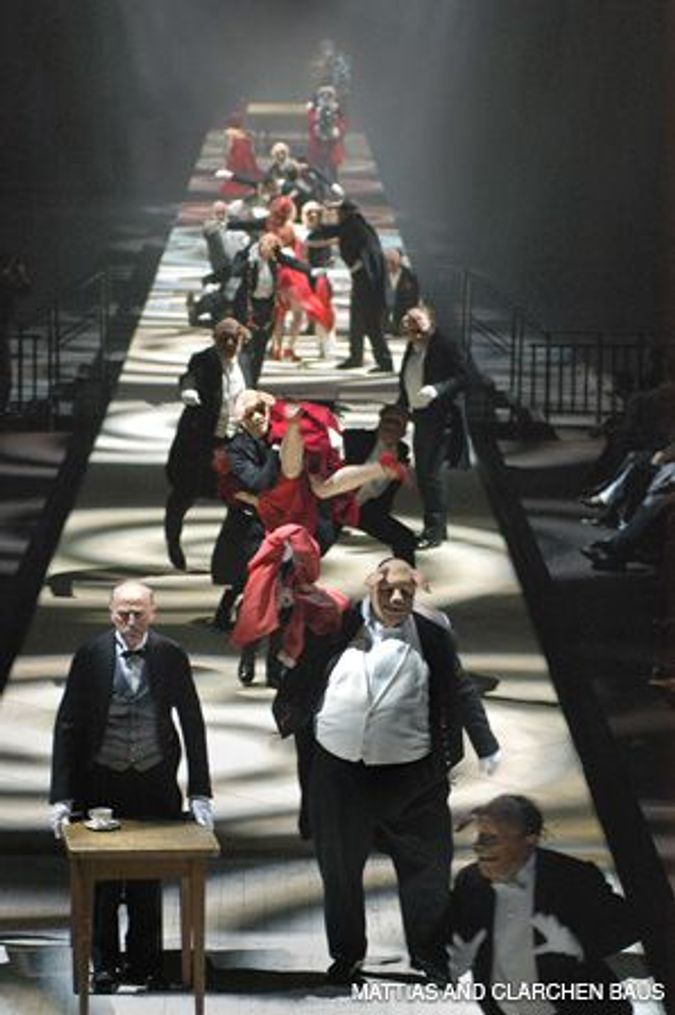 HOG WILD: The production originated at the RuhrTriennale Festival in Bochum, Germany.

The production originated at the RuhrTriennale Festival in Bochum, Germany, where it was performed in a power plant that at the time existed in a steel factory. The German audience sat on platforms placed on railroad tracks, which moved along a lengthy table-like stage, and this effect will be reproduced faithfully at the Armory. All this sounds very innovative and unusual, yet for anyone who plans to plunk down $250 for a top-priced ticket to this extravaganza, some caveats may be in order.

“Die Soldaten,” as seen in a 1989 Stuttgart production on DVD from Arthaus (distributed in the United States by Naxos), is not quite hot fun in the summertime, to put it mildly. Its four acts and 15 scenes deal with the rape and annihilation of a young girl, Marie, by a group of soldiers, yet its message is not merely anti-militarist and anti-war. A shriek against man’s inhumanity to his fellow man, Zimmermann’s music follows his concept of “spherical time,” in which past, present and future occur simultaneously. In musical terms this translates as messy sensory overload, as if a huge, blatting and splatting gamelan orchestra and free jazz ensemble were conflated into the 110-piece Bochum Symphony (which will be playing at the Park Avenue Armory, complete with overloaded percussion section). Then there is the cast of bellowing singers, adding up to a cumulative effect of almost constant noise, like a particularly oppressive and humorless Teutonic heavy-metal concert.

Occasionally, a musical quotation can be caught through the somewhat hushed din, whether from Bach, jazz or Gregorian chant, but this is intended as a joyless ironic counterpoint to the violent onstage action. Further decibels are added by film projections, taped sounds, etc. Yet, Los Angeles-born conductor Steven Sloane, who will be leading the Armory production, has euphemistically claimed in interviews that “Die Soldaten” is “like enlarged chamber music” with a “very transparent and intimate nature.” Anyone who attends *“Die Soldaten” *expecting the Guarneri String Quartet will be bitterly disappointed.

Unrelenting loudness is not the only problem with “Die Soldaten.” It is also marred by literally suicidal despair. As a young Nazi soldier, Zimmermann was invalided out of the Wehrmacht with a serious skin disease. Already afflicted with a degenerative eye condition, Zimmermann, weighed down with depression and insomnia, killed himself in 1970. The guy had a genuinely miserable life, but this does not make his opera any better.

To some chic audiences in Europe, suicide gives an extra stamp of authenticity to any depressed artistic creation, as if showing that its author really meant what he said. Even the commonly used German word for suicide, Freitod or “free death,” gives a glamorous sheen to an implied action of liberty. Yet sincerity is no gage of any artwork’s value, and “Die Soldaten” is simply too hopeless to be a fully realized artwork. Zimmermann’s work has been compared to Alban Berg’s 1925 modernist opera “Wozzeck,” which also features a woman named Marie who has tragic dealings with soldiers. But Berg’s deeply empathetic and heartfelt music assures that listeners truly care about Marie, who emerges as a convincing dramatic character. Zimmermann was quite unconcerned with bringing his own Marie in “Die Soldaten” to life before he destroyed her; she is a cipher meant to represent an element of his dark philosophy about mankind. There is no redemption in “Die Soldaten,” neither from its composer’s devout Catholic faith nor in its obsessively reiterated political message.

To a European sensibility, setting the New York production in an armory might seem a further pooh-poohing reference to American militarism. (Never mind that the city’s armories are used for such humanistic purposes as sheltering homeless people and displaying art exhibits, in addition to gathering army reservists.) Zimmermann said of himself, “I am presumably a mixture, typical of the Rheinland, of monk and Dionysus,” and he did write intriguing works of value on a smaller scale. German theater director Jürgen Flimm, who runs the RuhrTriennale Festival, has claimed in interviews that Zimmermann revived Europe’s avant-garde music after it was stamped out by the Nazis. Yet “Il Prigioniero” (“The Prisoner”), a far better opera by Italian modernist Luigi Dallapiccola (1904-1975), premiered much earlier, in 1949. Dallapiccola’s work, composed along 12-tone principles comparable with Zimmermann’s, is lyrical, heartening and noble as it expresses its themes of war’s woes and man’s inhumanity. A representative CD of *“Il Prigioniero” * from Sony BMG, conducted by Esa-Pekka Salonen, gives an idea of what Armory audiences will be missing in terms of artistic gratification and absence of suicidal despair. Caveat emptor!

Benjamin Ivry is the author of biographies of Maurice Ravel, Francis Poulenc and Arthur Rimbaud.

Monumental Epic ‘Soldiers’ Into N.Y.: ‘Die Soldaten’ To Be Staged at Armory