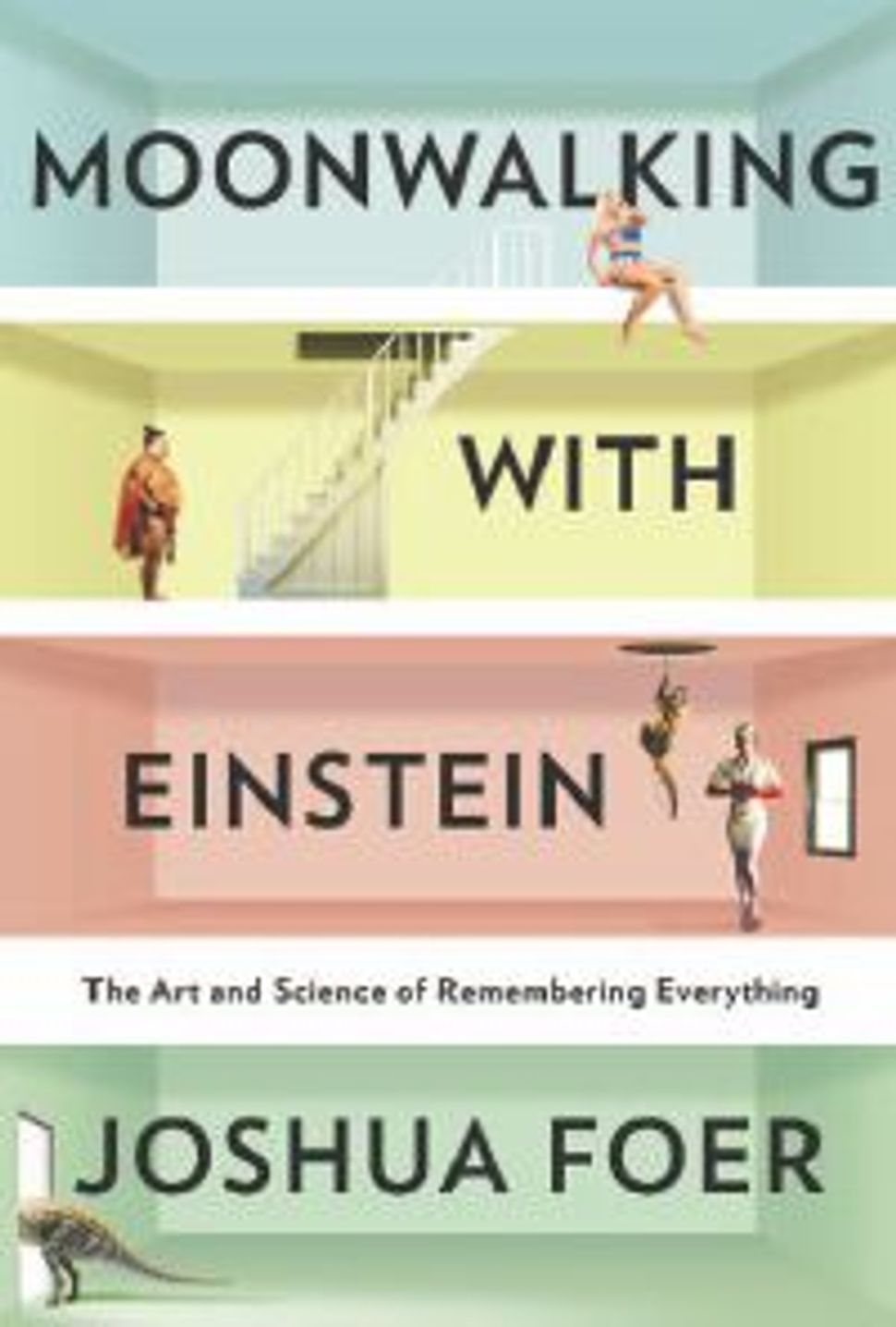 MOONWALKING WITH EINSTEIN: THE ART AND SCIENCE OF REMEMBERING EVERYTHING
By Joshua Foer
The Penguin Press, 320 pages, $26.95

In his intriguing first book, “Moonwalking With Einstein,” Joshua Foer takes on the task of explaining the history of memory, its current state and how he entered the world of competitive recollection. He surveys the meaning and significance of memory from ancient Greece, through the Renaissance and up to now. 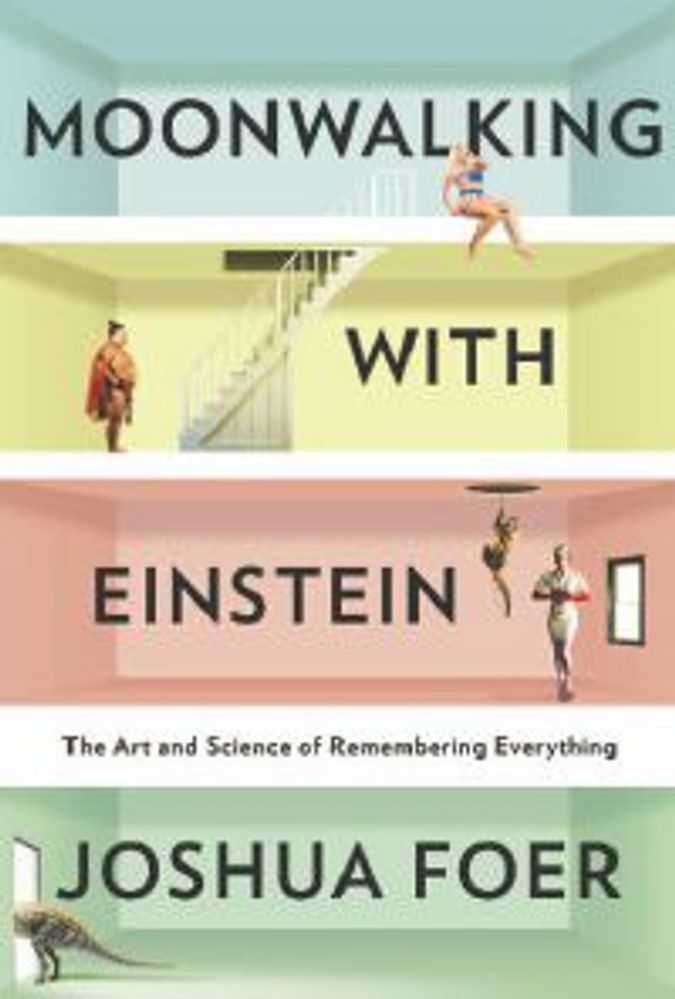 Today’s masters of memory make an odd group. Strange, autistic or vividly colorful characters; amateur enthusiasts; dilettante graduates, and self-help entrepreneurs are joined solely through the ability to store almost any content in their minds.

And the extent and speed of their memory is impressive. It’s de rigueur for them to memorize the order of a pack of cards in a minute. Foer, upon hearing from the competitors that the skill is learnable, decides to learn. At first hoping that he will merely be able to remember the reason that he is standing in front of the open refrigerator door, he embarks on an obsessive journey into the art of memory.

Foer’s descriptions of the mechanical tricks of memory might sound counterintuitive, especially given our romantic expectations about the term memory. There›s very little nostalgia here. Memory is neither a naturally perfect photograph nor an ocean of the past that washes over us in quiet moments of reverie, but rather is an obsessive act of gobbling up and controlling, with idiosyncratic and even wacky creativity, all kinds of information.

During Foer’s yearlong journey from being a curious journalist to being a finalist in America’s memory championships (images of Terry Bradshaw in a wheelchair and Bill Clinton copulating are examples of how he stores fabulous amounts of data in his head), something important and unexpected happens: In an age where so many of us depend on electronic aids (just like Foer, who admits he can barely remember a phone number, let alone where he left his car) we learn — or perhaps remember — something that the ancients knew and valued above all else: That a vigorously trained memory is humankind’s greatest resource.

We live in an age of “extensive” reading, perusing a huge variety of sources yet recollecting little of what we read. This is totally unlike the “intensive” reading and remembering traditions of the ancient world where, in the absence of indexes or mechanized printing, scholars memorized full systems and collections of text for lifelong use. As with actors or the survivors in “Fahrenheit 451,” people would walk around with complete books and texts continuously available to their conscious memory.

Though we could go back much further into the ancient traditions of the Hebrew Bible, a good place for understanding the roots of memory in the Jewish tradition is the destruction of the Second Temple in 70 C.E. and the configuration of tradition known as Rabbinic Judaism. The rabbis employed many tools — Torah trope, the distinctive hermeneutical system of midrash; the flowering of liturgical poetry, or piyut; standardization of prayer; esoteric and mystical traditions, and much more — to reshape Judaism’s fragments into the memorable core elements that have served Jewish life until today.

That the essential role of artificial memory technique in organizing and reimagining the Jewish world has been mostly ignored by scholarship is no surprise. Indeed, as Foer points out, prior to Frances Yates’s monumental study “The Art of Memory” in 1966, modern scholarship in any field had barely acknowledged the structure and impact of the ancient arts of memory on our world. In Yates’s words, since memory was “not recognized as belonging to any of the normal disciplines, [it was] omitted because it was no one’s business. And yet it has turned out to be, in a sense, everyone’s business.”

Though a complex subject, the art of memory is traditionally attributed to a discovery by the poet Simonides (c. 556 BCE–468 BCE) who is said to have invented the method of using memory palaces to store information. The method works by training the mind to use templates of familiar places to house outrageous (and thus memorable) images to store voluminous amounts of data, whether epics, numbers, names, laws or anything else. It isn’t only Hollywood and Madison Avenue that use sex and violence. Foer shows how lovely lady lumps, bloody monsters and crazed faces were the prompts to remind even the most refined thinkers of their texts, and that many religious authorities were alarmed by this mode of remembering sacred texts.

External memory shapes our whole civilization. Foer asks rhetorically what would happen if all our prosthetic memories were destroyed. Even if we could communicate with our phones, computers and printing presses, a world with no record outside our heads would radically change who we are. But even pre-existing books are stamped by the tropes of memory. The epics attributed to Homer are riddled with the rhythms, stock phrases and aides-memoires that would have enabled ancient bards to recount them from memory.

Foer does an excellent job of tracing the history of the arts of memory, as explained by scholars like Yates and Mary Carruthers, to its gradual disappearance from the mainstream of intellectual life. At the same time, he meets scientists and savants wrapped up in the world of memory, and joins a coterie of memory champs and charlatans who employ parts of the technique today. His discovery of a competition for memorizing poems, cards, and characters under lights, like a second-rate poker tournament on ESPN3, is bittersweet. It’s both illuminating and surprising to realize that from the same core techniques of memory and composition emerged everything from the Mishnah to Saint Thomas Aquinas’s “Summa Theologica” to “The Complete Works of Shakespeare.”

While charming and pithy, Foer is not shy about making clear his belief that with all the clamor of the information age, we don’t seem to be able to remember much at all — not how our sacred traditions were generated and passed down, not how great literature was learned and reimagined, not how, for millennia, an individual’s memory could determine his destiny. Indeed, we still seem unable to remember what we are doing in front of the fridge with the door open.