The Posthumous Triumphs of Morton Feldman 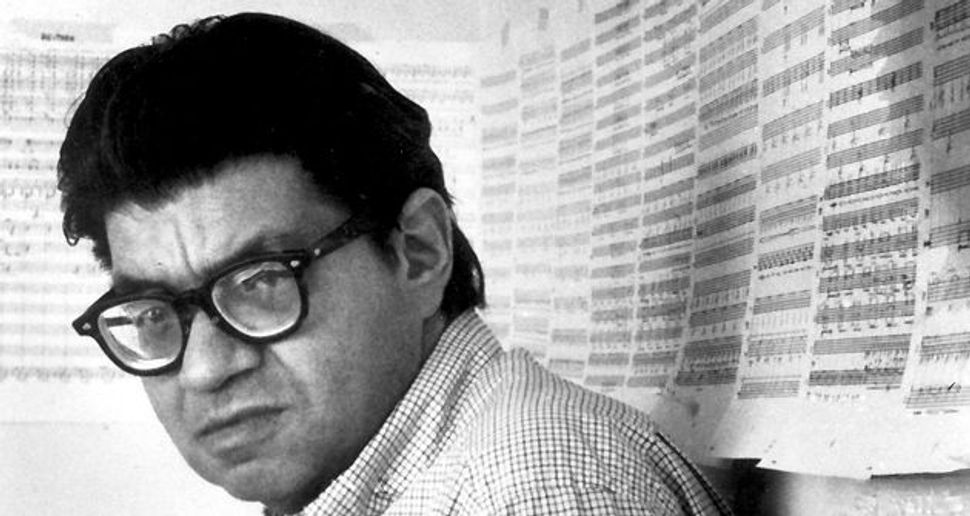 A Luminous Composer: Morton Feldman described himself as ?a cross between Ludwig Wittgenstein and Zero Mostel.? Image by THE UNIVERSITY AT BUFFALO LIBRARY

With the sole exception of one problematic performance of his “Coptic Light” in 1986, Lincoln Center never presented any of Morton Feldman’s music during his lifetime. Indeed, even since his death, in 1987, the center has presented little of his work. A notable exception was its 1996 retrospective of Feldman’s compositions — a well-attended, highly praised series of performances, about which The New York Times’ chief critic marveled at the extraordinary beauty and strangeness of the music, but even more at the large, focused, attentive and young audience these concerts attracted.

Over the past decades, Feldman has become accepted as one of the most distinctive and innovative composers of the 20th century. The trickle of recordings available in his lifetime has become a steady stream, converting listeners into passionate devotees. So it is most welcome that Lincoln Center decided to inaugurate its new “Tully Scope” festival with two programs, on February 22 and 24, focused on his music. These came as New York City Opera is preparing to give the premiere in the United States of a fully staged performance of his operatic collaboration with Samuel Beckett, “Neither,” to run from March 25 to April 8.

Feldman the person was loud, lively, contentious and raucously humorous; he described himself as “a New York Jew” and “a cross between Ludwig Wittgenstein and Zero Mostel.” His idiosyncratic music, however, presents a completely different persona: quiet, subtle and close to mystical, certainly in his luminous and monumental late works. When I wrote about Feldman for the Forward a decade ago, many of my colleagues were surprised that I’d flagged him so prominently as a Jewish composer (as opposed to someone who’d come from a Jewish background). But since then, this unfashionable idea has become too obvious not to notice. Feldman himself observed: “Because I’m Jewish, I don’t identify with, say, Western civilization music…. I want to be the first great composer that is Jewish.” For Feldman, however, “Jewish” meant being inspired by the un-nameable, the mystical divine presence manifesting itself in the power of sound.

Steven Schick began the February 22 program by quietly arriving barefoot onstage to play Feldman’s early “King of Denmark” for solo percussionist. This supremely quiet, dignified work — played with only fingers and hand, no sticks — was inspired by the legend of Denmark’s King Christian, who donned a yellow star in solidarity with his Jewish subjects. Although this story is apocryphal, Feldman believed it to be true. He composed this music using a graphic, rather than a standard, form of musical notation, a critical step in his lifelong quest to find the way to express the “in-between” state, playing with both intention and expectation to keep the sounds “alive” and to make the music more palpable. Schick made every sound leap into the audience’s ears. Approaching this solo work barefoot made the performance something of a humble, personal ritual and had the advantage of avoiding any shoe-related noises that might diminish Schick’s subtle touch.

Schick returned afterward, feet clad, to conduct the International Contemporary Ensemble in magnificent performances of two key Feldman influences, Anton Webern and John Cage, plus Iannis Xenakis. He nailed each distinct personality: Webern’s miniaturist serialism usually intimidates performers into a gray, deadpan rendering, but here sounded more Viennese-y. Cage’s notorious and seldom performed “Imaginary Landscape No. 4” for 12 radios — two players to each radio: one controlling volume, the other the tuning according to a precisely notated score — was given a sensitive, accurate reading that almost made it seem nostalgic, as the transition to digital radio will shortly make this work unplayable as originally conceived. And Xenakis’s “Jalons,” written just after he had a famous public appearance with Feldman, showed the Greek at his most knottily rambunctious. Each work ricocheted against all the others, adding even more depth to their already rich experiences.

Schick and the full ICE concluded with a gloriously intense traversal of the wordless, 45-minute “For Samuel Beckett.” Feldman often compared his music to a private, closed room, but most of his “rooms” also have “windows” — openings for breath or silence; however, this Beckett-inspired work, the last composition Feldman completed, shows the composer at his most deliberately hermetic, verging on the claustrophobic. Like Beckett’s writings, Feldman’s music is simultaneously clear and dense, repetitious and overlapping, obsessive and evolving. In this work, Feldman ingeniously removes easy guideposts, such as clearly discernible pitches, so listeners are plunged deep into a mysterious, rich weave of pure sonorities.

The February 24 concert, with Jeffrey Milarsky conducting the Axiom Ensemble of current and recent graduates of The Juilliard School, featured Feldman’s best-known (but still rarely performed) composition: “Rothko Chapel,” a stunningly beautiful work commissioned in the painter’s memory for the meditational chapel that John and Dominique de Menil had built in Houston, and for which they’d had Mark Rothko create a series of paintings. Rothko hanged himself before these dark paintings were installed, so the music became a memorial as well as a meditation. Feldman had known Rothko well, as he did many of the painters of his time. He claimed to have gone drinking every night throughout the 1950s with Cage in the Cedar Tavern on Eighth Street in Manhattan’s West Village, the main hangout of the Abstract Expressionists in that era.

Feldman recalled that in his first encounter with Rothko, the painter had enthused about Felix Mendelssohn’s youthful lyrical compositions. Somehow this memory made Feldman want, atypically, to create a parade of musical images inspired from his own artistic development. In a revealing 1976 interview in Studio International, Feldman explained how the solo viola begins the work “in a synagogue-y type of way, a little rhetorical and declamatory,” but “as I get older the piece gets a little abstract, just like my own career.” It is only in the middle of the work, where there is the greatest amount of repetition — “abstraction,” in his words — that he felt he came closest to the art of his late friend. It certainly has a transcendent stillness that is nothing short of rapturous.

The fourth and final section Feldman always described as “quasi-Hebraic.” It’s a transformation of a melody he’d written as a teenager. Even though this section is far more purposeful and driven than the prior stillness, the luminosity he achieves lingers through the return of musical motion, but without resolution. (Capping the long periods of stasis with a similar return of motion at the end became a common thread through many of his late works.) Stravinsky died while Feldman was working on “Rothko Chapel,” so Feldman included a Stravinskian passage (bars 243–301) as a memorial to him, too. Milarsky, his Juilliard musicians and the wordless Clarion Choir delivered the full rapture of the work, to a rapt audience. In addition to two deeply affecting works by Hungarian-Jewish composer György Kurtág, now 85, the concert also included Feldman’s “Bass Clarinet and Percussion,” which has this instrument whispering in only its uppermost register, while two percussionists sketchily provide contrasting phrases on various instruments.

Beckett and Feldman’s collaboration “Neither,” to be produced by New York City Opera, is the sole operatic effort by either. This is a major work for both artists, who fashioned an entirely spiritual, internalized work, one without any outward plot, without any of the other usual appurtenances one expects from opera — or even any attempt to have the words be discernible. The “libretto” that Beckett provided for Feldman is only a few lines of quite abstract text, which begins: “to and fro in shadow from inner to outer shadow / from impenetrable self to impenetrable unself by way of neither….” From this brief “libretto,” Feldman weaves a major, hour-long and disquieting score for soprano and orchestra. The challenging soprano solo is restricted to her upper register, often with separated syllables paired onto isolated notes, and for long periods even with the obsessively identical pitch. The effect is akin to using voice the way a blind person uses a cane to tap — discovering the landscape through sound.

The obsessive repetitions remind one of how Feldman drew inspiration from the weaving of Turkic rugs: “The only way to get that color is to dip it many times.” But, uncharacteristically, the score is occasionally overtly dramatic — albeit on Feldman’s own stylistic terms, and in ways totally divorced from anything customary. For example, there are practically no loud sounds in anything that Feldman wrote; however, there are such emphatic sounds here, as he surprisingly sets the phrase “unheard footfalls only sound” not with something quiet, but with loud stabbing noises. There’s nothing remotely comparable in any of his other works. Toward the end, in what transformation or catharsis there may be in this “opera,” the soprano begins to be liberated from the static pitch idea, changing to a brief melodic cell that chromatically keeps turning in on itself and has been percolating through the instruments previously. Typically, for both Feldman and Beckett, this development indicates motion, but motion that is going nowhere. Overall, the gorgeously colorful orchestral writing of this minimal score provides the drama. Feldman’s “Neither” will be on a triple bill with two other solo operas (or “monodramas”): Arnold Schoenberg’s hyper-emotional “Erwartung” and the world premiere of a new work by John Zorn, “La Machine de l’être.”

A tale of the Baal Shem Tov, recounted by Martin Buber, describes a man peering into the window of a house where people are dancing. Since he can’t hear the music, their dancing seems like madness to him. For many, Morton Feldman’s music will seem like madness. But if you enter into his “room,” you will discover a great Jewish composer who came as close to the mystical as anyone has. It’s wonderful that Lincoln Center is at last beginning to allow Feldman’s works to be performed in its rooms — if only it could have done so when he was alive!

Raphael Mostel is a composer based in New York City who frequently writes for the Forward.

The Posthumous Triumphs of Morton Feldman