Not for the Sake of Heaven

Cuts, But Where?: These figures show which programs pay what prices. Image by source : Donna Cooper, center for american progress

Passover is coming, and with it, the season of questions. We Jews have long prided ourselves on asking good questions — even more than on providing adequate answers. We prize debates that go on forever. And, of course, we answer questions with still more questions. Inquiry, discourse, communication: These are some of the core values of the Jewish intellectual heritage.

And yet, while it has temporarily been pushed off the front page by the news from Japan and Libya, our current domestic political moment is one so devoid of truthful discourse as to render our Passover symposia almost absurd, verbally fiddling while the planet burns, deluding us into thinking that conversations like the Passover Seder still matter in our public life. 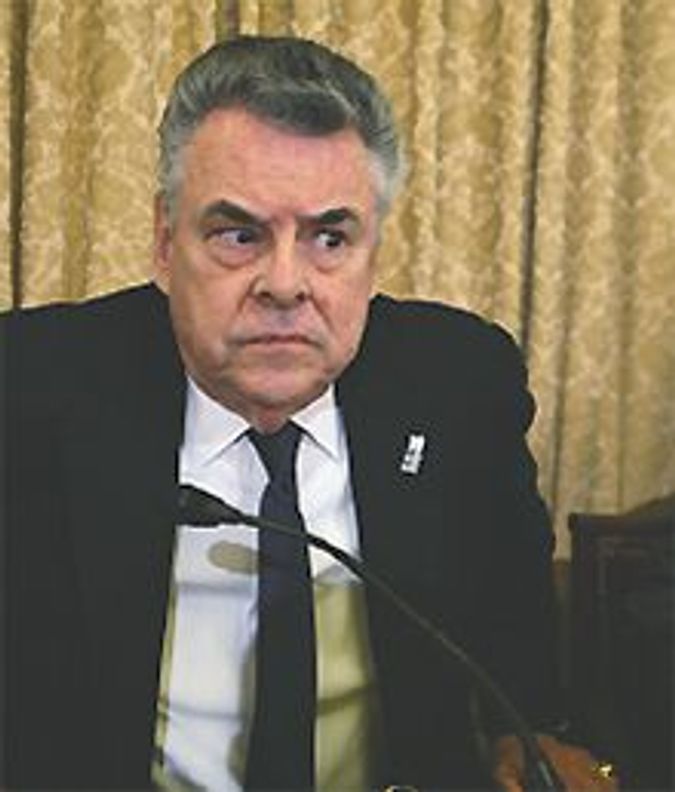 A Republican King: For the sake of heaven, Congress is holding hearings on Islam in America. Image by Getty Images

This is not a matter of ideology. I am not so young as to suppose that a momentary rightward drift in America’s political trajectory represents the end of the world as we know it. (After the events in Wisconsin and Michigan, and the Islamophobic McCarthyism in Washington, a young friend of mine on Facebook asked me how to stay politically engaged but “avoid the despair and paranoia.” He said he was really in a “dark world at the moment, trying to get out.” I remember feeling that way in 1994.) This, too, shall pass.

Substance is not my concern here, process is. “We’re sort of in a truth-free period right now,” former president Clinton said recently. I think that this assessment is spot-on, and should worry all of us who value the very notion of reasoned intellectual discourse.

Contrast, for example, Rep. Peter King’s odious accusations of collective guilt against the Muslim American community with the current efforts around the country to return to pre-New Deal, Gilded Age America. The former, I think, are unconscionable. But at least they’re honest. However misinformed King and his allies may be, they are at least acting sincerely against what they perceive to be a threat, and they are stating their case clearly. In theory, my dispute with King is l’shem shamayim — for the sake of heaven. We both want people to be free from terrorist attacks, and I think we both want Americans be free from religious persecution. We just have a strong difference of opinion as to how best to pursue those goals.

Such is not the case, however, with Republican efforts to “rein in spending” or “reform public unions” or whatever other spin-doctored phrase the Fox/Koch axis has concocted to mask its radical, reactionary, robber-baron agenda. These aren’t goals, they’re pretexts, and the refusal to speak honestly about them makes real public debate impossible.

For example, we now know, thanks to off-the-cuff (but recorded) remarks, that Wisconsin’s governor, Scott Walker, busted the public sector union in Wisconsin not to balance the state budget, but to bust the union, which tends to contribute to the Democratic Party. “Balancing the budget” had about as much to do with Walker’s action as “weapons of mass destruction” did with the invasion of Iraq.

Cuts, But Where?: These figures show which programs pay what prices. Image by source : Donna Cooper, center for american progress

Or consider the congressional budget negotiations. As the infographic by the Center for American Progress (reproduced here) makes clear, balancing the budget is a mere pretext for axing programs that Republicans have hated for decades. I’m not even talking about NPR and the Public Broadcasting Service; the culture war is just another distraction. The entire savings from cutting early childhood programs, low-income housing programs, legal services for the poor, food stamps — all $44 billion of it — is only slightly more than the $42 billion cost of the Bush tax cuts for the richest 1% of Americans. This isn’t about the budget; it’s about redistributing wealth from the poorest to the wealthiest.

The CAP infographic really is a gem. Did you know that the $8.9 billion that the Republicans want to cut from low-income housing programs is exactly equivalent to the $8.9 billion it costs to let rich people deduct the mortgage interest on vacation homes? If Congress wanted to save $8.9 billion in the area of housing, why not put the burden on the 32% of Americans fortunate enough to own vacation homes? Or how about ensuring equal access to justice by preserving Legal Aid ($420 million in proposed cuts) and stopping companies from writing off punitive damages (at a cost of $312 million)? You don’t get to write off your parking tickets, so why should huge corporations write off fines for their willful and harmful misconduct?

It’s nothing new for Republicans to favor the rich over the poor; that preference is as old as the Grand Old Party itself. And there’s nothing new about the rich buying off politicians in order to get richer. It’s the world’s second-oldest profession, and it has much in common with the first. Today’s GOP agenda aims to overturn the Great Society, and the New Deal, and to return America to the laissez-faire policies of Herbert Hoover — only this time, with multinational corporations, globalization and an information-technology-enabled financial bubble machine.

And actually, there’s nothing wrong with that. There are plenty of sincere conservatives who sincerely believe in total laissez-faire economics. If the rich get richer, they think that the poor will likely be better off, too — and certainly better off than if the government tries to game the system. From Friedrich Hayek to Milton Friedman, this view is time-honored and is clearly an ideology animating the Republicans’ agenda.

But you won’t hear any of this real conservatism on Fox News. Instead, we’re told that the estate tax (I’m sorry, the “death tax”) hurts families and family farms, even though it actually affects only “families” who inherit more than $3 million. Instead of principled defenses of conservative positions, our public discourse is filled with cynical lies, and phrases like “relief for the American family” pasted over policies that hurt 95% of American families.

Our popular political culture is like the child she’eno yodeah lishol, who doesn’t know that there’s a question to ask. It’s an infantilized adolescent, brainwashed by media spin. We’re not having the discussion we ought to have, because one side refuses to engage, instead offering one half-truth after another in order to shred the social-safety net.

We’re not even clear on how we got here in the first place. To some, the Tea Party movement represents a populist upwelling against a Democratic administration that grew government too big. But this, too, is a mirage. Actually, the Tea Party is a pseudo-populist movement bankrolled by big business — not just the Koch brothers, but a legion of phony “think tanks” and “grassroots organizations” that somehow have the money to make big media buys. Yes, there’s genuine anger out there. But it’s been whipped into a specifically Republican frenzy, thanks to very deliberate, calculated work by some very rich people and corporations.

And why the anger? Obviously, it relates to the deep pain created by the financial crisis of 2008. And here’s where it gets really fun. The financial crisis was brought on by deregulation, which allowed huge (“too big to fail”) financial institutions to merge with one another and make unregulated, high-risk bets. But the triumph of the Tea Party meant a victory for the deregulators, who now want even less regulation than there was before. Because of the sleight-of-hand perpetrated on sincere, hurting Tea Party voters — perhaps the greatest con in our nation’s history — the kid who crashed the old car was given the keys to the new one.

The crisis was also brought on by the increase in the wealth gap, which concentrated so much wealth in so few hands. Today, a mere 400 people hold more cash, stock and property than 255 million Americans. In 2009, America’s wealthiest households had a net worth that was 225 times greater than that of the median family’s, the most lopsided ratio in American history. The injustice of that distribution of wealth is so massive that our eyes glaze over.

Yet even setting aside justice concerns, this is exactly the sort of imbalance that brings on big crashes. Why? Because those few very rich folks tend to invest in those same “too big to fail” banks that, without regulation, are incentivized to overspeculate. When wealth is this concentrated, risk is exacerbated, and when big bets are lost (as they inevitably sometimes are), the costs are far more severe. We fall farther, harder and faster.

Yet once again, the anger brought on by the financial crisis has handed over power to the people who created the crisis to begin with. Bernard Madoff went to jail for running a Ponzi scheme. The Republicans went to Congress.

The financial crisis is also the reason we have the budget deficit that suddenly, after decades of deficit spending, so alarms the Republican Party. The first stimulus plan, the second stimulus plan (what the Obama administration got in exchange for extending the Bush tax cuts last December) and the massive drop in tax revenue are the main reasons the government is in such a financial hole. Deregulation and wealth concentration caused this deficit. The response? More deregulation and wealth concentration! All the while repeating disingenuously that this is about reducing the deficit or helping America’s small businesses, or whatever. It isn’t. From public television to collective bargaining, from the tax code to the lack of real financial regulation, Republican policies are about radical social engineering.

Here’s what I think Passover, and the Jewish value of discourse it represents, is meant to teach us. If you’re going to cut programs for the poor because you think it’s not government’s business to help the poor, or cut NPR because you think it’s too liberal, have the courage to argue your case directly. If you think unions are bad for America, then say so. Don’t hide behind the financial crisis, or the budget deficit, or phony rhetoric about American families.

As we sit down to our Seders, disagreement is part of the point. On important questions of justice, freedom and morality, reasonable people disagree, and that’s fine. But the very foundation of our religious life is that honest, principled debate is possible, that it is a sacred act to argue. And yet for all the bluster and histrionics on the airwaves today, there is little true debate, no real conversation. On the contrary, the level of dissembling has grown so high that the news looks less like Passover and more like Purim: a grotesque carnival in which no one can tell truth from falsehood.

Not for the Sake of Heaven