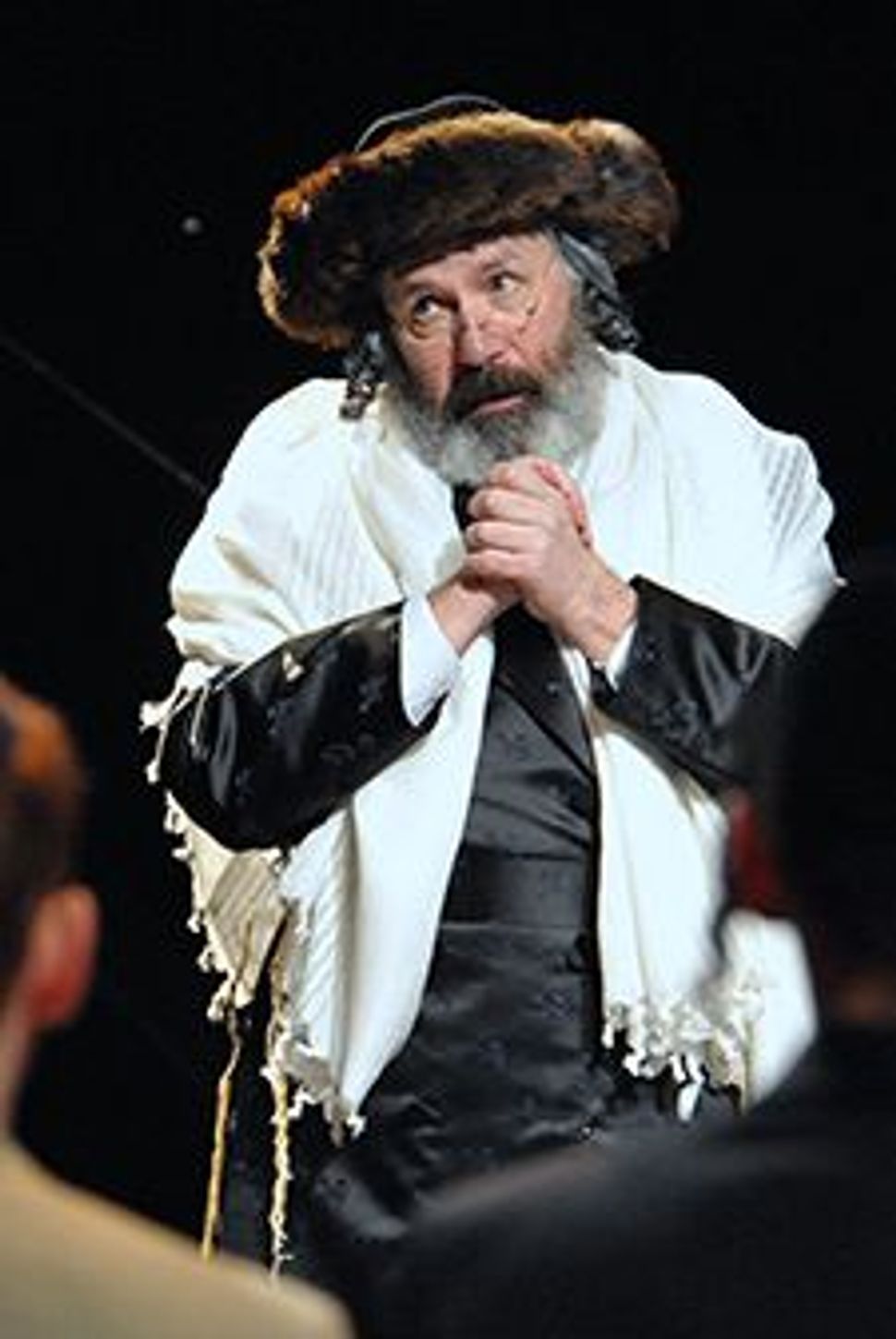 ‘The Chosen” is back in Washington, D.C., but this time with two Aarons presented in the round.

In this new production by Theater J, director Aaron Posner refigures his 1999 co-adaptation of “The Chosen,” Chaim Potok’s 1967 novel exploring the enduring friendship of two boys from different Jewish worlds in 1940s Brooklyn. And it stars, as the narrator, Aaron Davidman, who has directed productions of “The Chosen” in his role as artistic director of the Jewish Theatre San Francisco.

Theater J has a history with “The Chosen,” having hosted the play’s D.C. debut in 2001. The company’s second interpretation, however, has garnered a higher profile thanks to Posner, a two-time Helen Hayes Award winner with exclusive rights to adapt Potok’s works. But perhaps the most impressive modification is the locale: the 683-seat Fichandler Theater inside the grand, newly renovated Arena Stage at the Mead Center for American Theater.

“There’s something magnificent about it,” Posner said of the space, which holds the distinction of hosting the play’s first-ever in-the-round staging. Theater J is the Arena Stage’s first local company-in-residence. “I think the play has opened up dramatically in this setting, in a way that no one could have seen.”

Indeed, the space allows for dynamics not possible with Theater J’s thrust stage at the Washington DCJCC. Posner takes full advantage: Hasidic Danny Saunders (Joshua Morgan) and Modern Orthodox Reuven Malter (Derek Kahn Thompson) first meet as enemies on the four corners of the Fichandler stage — transformed into the four corners of a baseball diamond — and become confidants through frequent strolls along the stage’s edges, which become sidewalks of Brooklyn’s Williamsburg section. Later, suspended windows mark the boundaries of Reuven and Danny’s emotional worlds: the respective studies of their fathers, played by veteran actors Edward Gero and Rick Foucheux. Davidman as narrator is a grown-up Reuven. He walks about, freely and unseen. The stage is the landscape of his own memory. 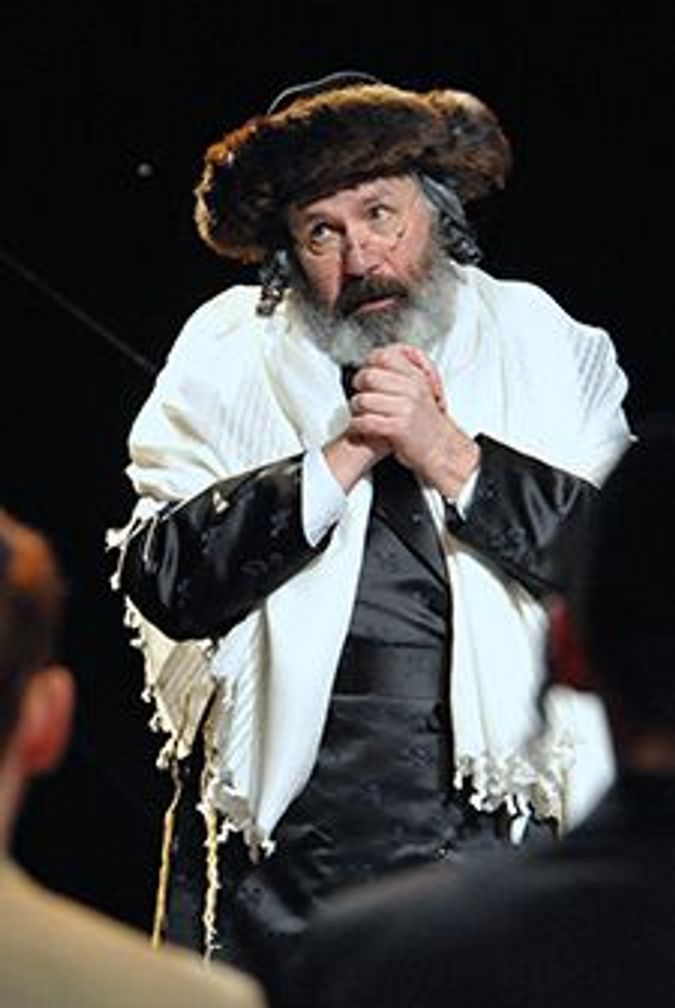 In addition to differences in staging, Posner said, the “voyeuristic nature” of in-the-round theater creates a greater sense of intimacy and, as a result, understanding. “The center of Chaim’s work was a unique view into a world that people didn’t know a lot about,” he explained. “His novels were literally views into the world of these communities… you’re literally looking into the windows of the studies of these remarkable men.”

Danny’s anguish is the play’s central conflict — his anger stemming from his father’s alienation and his desire for paternal love and approval. Joshua Morgan delivers a standout performance as the sometimes arrogant, yet brilliant, son of a Williamsburg tzadik, or righteous one. His angular features accentuate the concentrated intensity of his performance, which ranges from measured and thoughtful silence to raw, wildly gesticulated frustration.

He plays well beside, but outshines, Derek Kahn Thompson, who unfortunately delivers his lines with a bewilderment that, at times, seems unintentional. The boys’ friendship is an unlikely one, but flourishes thanks to a shared intellectual curiosity and to the reluctant approval of Danny’s father.

Thompson is more fluid in scenes with Gero, and their father-son relationship provides a warm contrast to that of the Saunders. Gero commands attention as he recites, with booming, European-affected inflections, a pro-Zionist speech at Madison Square Garden. Equally impressive is Foucheux’s turn as Danny’s emotionally distant father, which is at times terse and then suddenly thunderously eloquent, compelling the audience to sit up straight as though seated at a Talmud lecture.

Sound, too, is a strong point of “The Chosen.” Following an introduction by Davidman, faint city sounds seem to spill from overhead, pulling the audience into the world of Danny, Reuven and their colliding cultures. As Danny sits in his father’s study, the silence between the two is filled with only the sound of a ticking clock, wordlessly revealing their silent relationship. Later, the muffled sounds of praying men create an imaginary congregation that fills Reb Saunders’s synagogue. During his Zionism speech, Gero’s voice seems to bounce off the walls of a stadium, tempered by only the faint roar of an unseen rally.

Most of the cast is not Jewish, but one would never know it from their performances, perhaps thanks to the counsel of a local rabbi enlisted by Posner to give his actors lessons in the Talmud. “There’s only a certain energy with which you can approach certain moments,” Posner explained. “It’s inherently Jewish.”

This attention to detail may be what helped earn Posner his close relationship with Potok, who died in 2002. “I loved his work from the time I was a young man,” Posner recalled. “He loved the theater and had full appreciation for it.” Following the disastrous off-Broadway musical adaptation of “The Chosen” in 1988, which closed after eight performances in the wake of bad reviews and a string of directors that failed to win over audiences, Potok turned to Posner to resurrect the work as a straight play. The collaboration was so successful that Potok granted Posner exclusive rights to adapt his works. The relationship now continues with Potok’s widow, who oversaw the 2009 adaptation of his 1972 novel, “My Name Is Asher Lev.”

For Posner, returning to “The Chosen” is at once a familiar and distinct experience. In the past 10 years, a maturing worldview has driven him to constantly tweak and edit his adaptation. The play’s themes, however, remain the same and continue to resonate even beyond the Jewish community. In the end, Danny and his father reconcile: The years of silence had been inflicted with good intentions. A kinder, humbler Danny chooses to live in the secular world, while Reuven embraces a life of religious study. These fates, the play tells us, are not made, but chosen.

Rachel Tepper is the D.C. food editor of NBC’s food blog, The Feast, and writes about culture, Jewish life and the arts for various publications.

“The Chosen” runs March 8 to 27 on the Fichandler Stage at the Arena Stage’s Mead Center for American Theater.